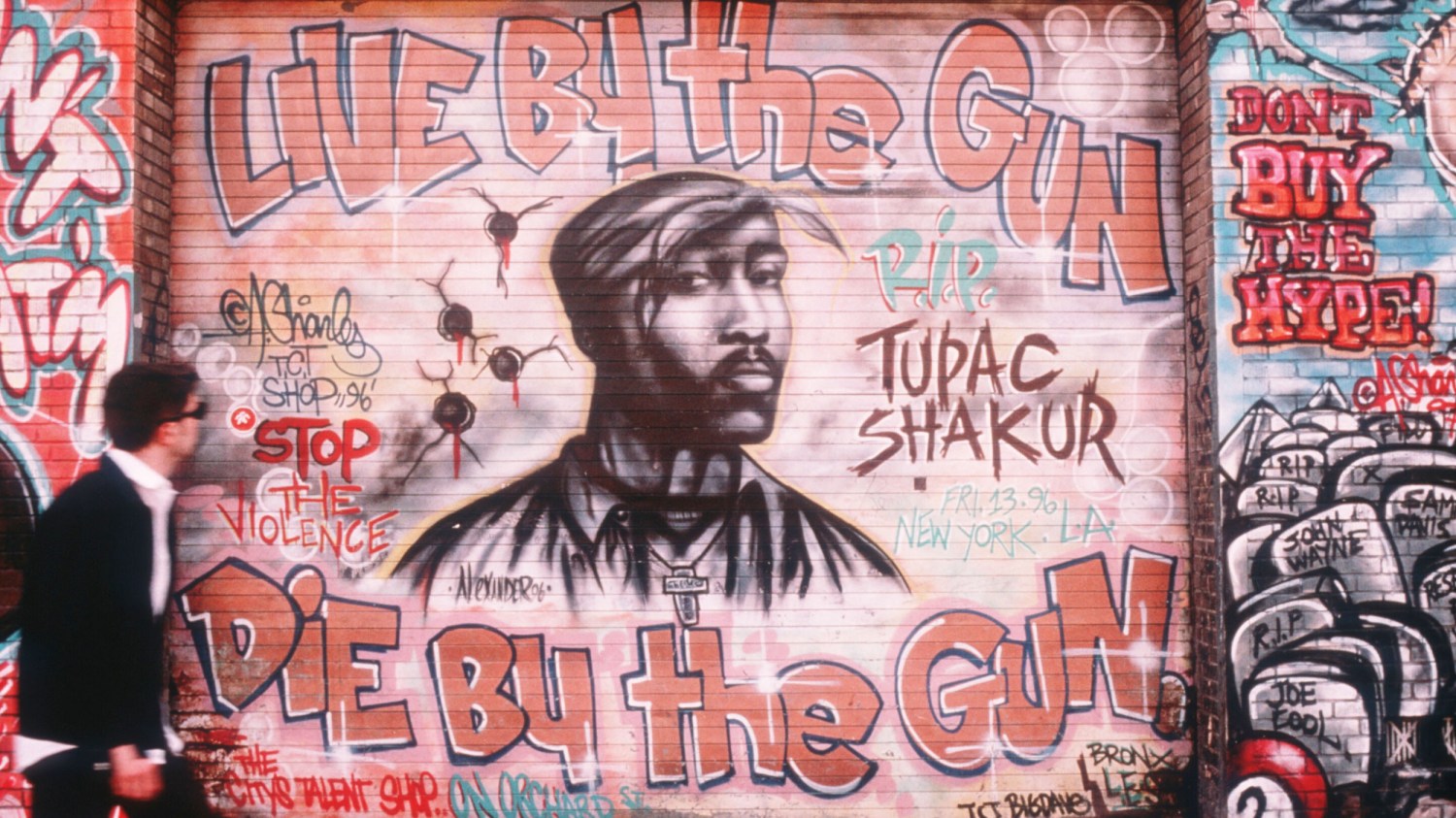 Conspiracy theories give fans comfort but, in truth, the brilliant artist was ‘a sacrificial lamb in thug clothing’

America has spent the past two decades fishing at red herrings and inventing theories about how our brilliant brother could be gunned down on the Las Vegas Strip at age 25. The real answer is obvious, yet too many of us who love the culture avoid the facts: Tupac sealed his fate with one punch to a Crip’s face.

Heartbreak can teach powerful lessons. But instead of admitting that Tupac’s genius was extinguished because he chose to play gangster, we continue to rationalize and glamorize his Thug Life, aided and abetted by a corrupt justice system that denies us much-needed closure. To prevent more Tupac tragedies, we need to understand what happened, and why:

On Sept. 7, 1996, Tupac, Death Row Records kingpin Marion “Suge” Knight and Suge’s gang of Bloods beat up a Southside Crip named Orlando “Baby Lane” Anderson in a Las Vegas casino lobby. Anderson and three other Crips went looking for payback. A few hours later, cruising the Vegas Strip in Anderson’s rented white Cadillac, they saw Suge driving a BMW with Tupac in the front passenger seat. Anderson shot Tupac from the back seat of the Caddy.

Ain’t no skullduggery to it. Just the basic street arithmetic that continues to send thousands of black males to their graves.

Anderson’s beatdown was captured on security video. Suge’s gangsters quickly spread the word that the killer was Anderson, according to what informants told police in the chaotic days after the shooting. Those anonymous sources were confirmed more than a decade later by the eyewitness account of Anderson’s uncle, Southside Crip boss Duane “Keffe D” Davis, who says he was in the car and handed Anderson the murder weapon. Keffe D’s statements are detailed in the 2011 book Murder Rap, by retired Los Angeles Police Department Detective Greg Kading.

But thanks to Internet-borne conspiracies and institutional injustice toward black life, the question of who murked Pac has never been murkier. The new Tupac biopic, All Eyez On Me, offers little clarity. Legend has enveloped Tupac’s death like barnacles on a sunken ship. But if you scrape all that away …

The machinery of Pac’s demise was set in motion in July 1996, when a crew of Crips snatched a Death Row pendant from a Blood named Trevon “Tray” Lane at Lakewood Mall near Compton, California, according to a Compton police affidavit. Two months later, Tray Lane was with Tupac and Suge at a Mike Tyson fight in Las Vegas. After the heavyweight champ knocked out Bruce Seldon in the first round, the Death Row clique left the MGM Grand arena and spotted Anderson in the lobby. Tray identified Anderson as one of the Crips who snatched his chain.

Tupac rolled up on Anderson, rhetorically demanded, “You from the South?” and punched him in the face. Tupac, Suge and their gang proceeded to stomp Anderson out, right there in the MGM lobby.

“In the vacuum created by lack of closure, everything, no matter how far-fetched, seems somehow possible.”

These are indisputable facts, backed by witness testimony, police reports and videotape. I first saw them gathered in one place in the May 1997 issue of Vibe magazine, in a story by Rob Marriott. The report detailed how after Tupac’s slaying, Bloods launched a full-out war on Compton Crips. Suge’s henchmen told other Bloods that Tupac’s killer was Keffe D’s nephew, according to the Compton police affidavit. When the bullets stopped flying, 13 gangsters had been shot, three fatally.

“There are no easy answers to the myriad questions surrounding Tupac’s death,” Marriott wrote after his harrowing experience reporting from the streets of gangland Compton. “But it has become clear that the rap star’s death — and the three homicides that followed — are only the most visible tragedies in a web of intrigue that extends deep into the L.A. underworld.”

That web was real. At the center was the tarantula Suge Knight, who, according to evidence detailed in Murder Rap and the book LAbyrinth by Randall Sullivan, ran Death Row like a Mafia boss. Suge’s violence is well-documented. He fueled a bicoastal beef with Sean “Puffy” Combs’ Bad Boy Records and its superstar rapper Biggie Smalls, who was killed six months after Tupac. Suge had LAPD cops on his payroll, according to LAbyrinth. On top of all that, shortly before his death Tupac argued with Suge over unpaid royalties, fired Death Row lawyer David Kenner and planned to leave the label.

Police, meanwhile, added to the confusion. Las Vegas cops told LAPD detective Russell Poole, according to LAbyrinth, that “the main reason they would never solve this case is that the politicians didn’t want them to. They said the powers that be had let them know the city didn’t need an O.J.-style circus.” Poole was investigating the Biggie killing. He said that LAPD brass, bracing for a lawsuit from Biggie’s family, blocked him from following numerous leads that might have connected black LAPD cops to Death Row. Poole was ultimately removed from the case and resigned from the LAPD in 1999.

Anderson denied killing Tupac and was never charged. In 1998, Anderson was shot dead outside a Compton car wash over what police there said was a drug debt. Anderson’s killer is serving three life terms.

In 2006, Kading, the LAPD detective, was assigned to reopen the Biggie Smalls homicide case. In Murder Rap, Kading says he and his team kept hearing about Keffe D, Anderson’s uncle, who saw Smalls at the Soul Train Music Awards after-party hosted by Vibe magazine shortly before the Brooklyn rapper was killed. Kading set up a drug deal sting to coerce Keffe D into talking about Biggie’s murder. The trap worked. Kading writes that in December 2008, facing decades in prison, Keffe D sat down to work out a deal — but denied any knowledge of Smalls’ killers.

Instead, Keffe D told them about Pac’s death. Kading was in the room questioning Keffe D. The interview was recorded. The gangster’s story went like this:

In 1991, when Keffe D’s Crip gang was selling dope nationwide, he was introduced to a Harlem drug dealer named Eric “Zip” Martin. They started doing business. Two years later, Zip, who was involved in the music business, brought Keffe D to a BET party at the Paradise Club in Los Angeles. At that party, Keffe said, Zip introduced him to Combs.

Keffe D said he maintained a relationship with Puffy, and he lent him the 1964 Chevy featured in Usher’s “Can U Get Wit It” video. When the East-West beef jumped off, Keffe D said, his Crips provided security for Bad Boy on the West Coast. At one point, Keffe D alleged, Combs said he would pay a million dollars for Pac and Suge to be killed. Kading quoted Keffe D in Murder Rap as saying: “(Puffy) was like, ‘I want to get rid of them dudes.’ … I was like, ‘Man, we’ll wipe their ass out, quick … it’s nothing. Consider that done.’ ”

Keffe D told Kading that he went to Vegas simply to enjoy the Tyson fight and met up there with Zip, his nephew “Baby Lane” Anderson and other Crips. After the lobby rumble, when Keffe Dheard his nephew Anderson got stomped by Death Row, they immediately planned to retaliate. Zip gave Keffe D a .40-caliber Glock. Kading wrote:

“ ‘(Zip) said it’s perfect timing,’ Keffe D recounted, leaving the exact meaning of the words up to us. Was Zip talking about killing two birds with one stone, taking out Suge and Tupac as payback for the Baby Lane beating and in the process collecting Puffy’s million-dollar bounty? It was impossible to know for sure.”

Trying to disprove these explanations is like arguing with someone who believes Barack Obama was born in Kenya.

Keffe D said that Zip departed after giving them the gun. Anderson, Keffe D and two other Crips cruised the Strip in Anderson’s rented Cadillac and spotted Tupac’s caravan. They pulled alongside the BMW driven by Suge Knight. Keffe D was in the Cadillac’s front passenger seat with the Glock, prepared to shoot, but Tupac and the BMW were on the opposite side of the Caddy. “Lane was like, ‘Give it here,’ ” Keffe D said, “and popped the dude.”

Keffe D told Kading he never got a dime of Combs’ promised payoff, although he thought Zip might have collected and not shared the loot. “If (Puffy) would have just given us half the money, I would have stayed strong,” Keffe said, explaining why he was telling on Combs.

Combs has called all of this “pure fiction” — and has said he never even used Crips as security.

Kading knew he couldn’t make a good legal case on the word of a criminal like Keffe D. He tried to coerce Zip to corroborate the story and tell on Combs by setting up a sting with Keffe D. But before the trap could be sprung, Kading’s superiors removed him from the case in 2009.

“It was almost as if, in some surreal way, Poole was right all along,” Kading wrote. “The LAPD was trying to cover up the Biggie Smalls murder, not by protecting corrupt cops but by undercutting the ability of its own investigators to make the case.”

Neither Keffe D, Zip nor anyone else has ever been charged with killing Tupac or Biggie. Zip died in 2012. Keffe D is locked up on a marijuana distribution conviction. The Las Vegas police investigation into Tupac’s murder technically remains open. “In the vacuum created by lack of closure, everything, no matter how far-fetched, seems somehow possible,” Kading wrote. “When the truth is missing in action, anything can take its place.”

Like the theory that Suge conspired with Anderson to kill Tupac because the rapper was owed millions and about to leave Death Row, which former LAPD detective Poole believed. Or that Snoop Dogg’s cousin Lil’ Half Dead, mad at ’Pac because he allegedly stole the hit song “Brenda’s Got a Baby,” helped Suge’s wife and Death Row’s head of security try to kill Suge and take over the company — but they missed Suge and hit ’Pac instead. Or that the FBI didn’t want ’Pac starting a black revolution. Or that he’s in the witness protection program. Or alive and well in Cuba.

Trying to disprove these explanations is like arguing with someone who believes Barack Obama was born in Kenya. Not since the assassination of President John F. Kennedy have conspiracy theories run so amok. But the simplest explanation is usually the right one. Of course a Crip came gunning for a crew of Bloods who dealt him a humiliating butt-whipping. Tupac beat up a killer, who then killed him. All over a piece of jewelry.

Tupac chose to live, and die, by the rules of Thug Life. Our inability to face that fact is a symptom of our inability to help our most troubled young black men.

“It’s become obvious to anyone paying attention that the gangsta image — for all its force and bluster — is nothing if not tragic, a myth of empowerment with the capacity to rob our generation of its potential greatness,” Marriott wrote in the 1997 Vibe story that connected the dots of the tragedy. “If we as a Hip Hop Nation can ever move beyond the directionless violence and self-destruction gangsta sometimes glorifies, then maybe we’ll have ’Pac to thank for it. Perhaps, in the end, he was simply a sacrificial lamb in thug’s clothing.”

Hip-hop music still thrives on violence and self-destruction, despite the rise of many incredible positive emcees. Recognizing the facts of Tupac’s death could offer some measure of redemption. There will be no help from law enforcement, no deserved clarity and closure through the process of arrest, trial and punishment. If those of us who love the culture don’t want Tupac to have died in vain, we need to come to grips with reality on our own.