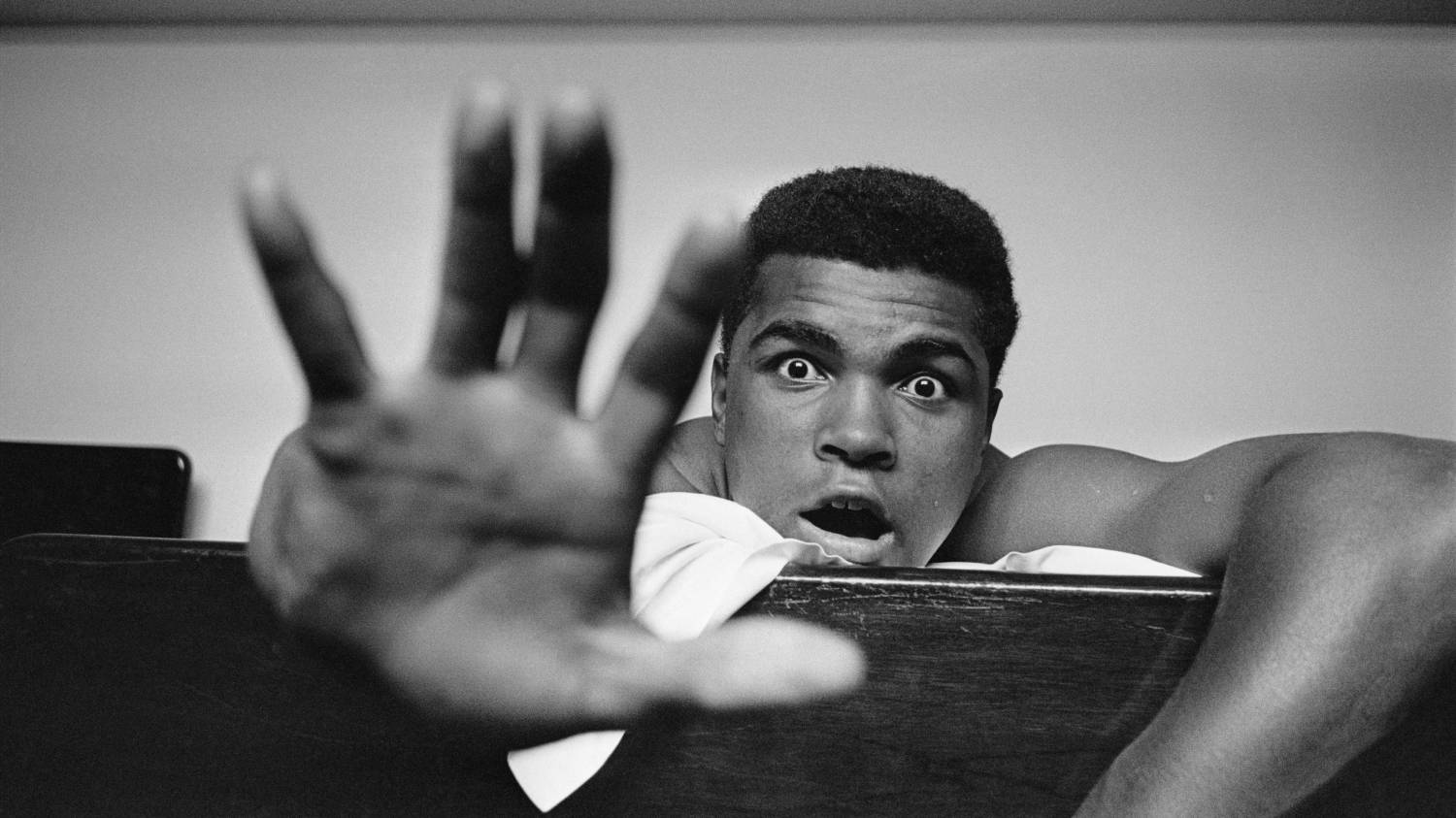 Muhammad Ali holds up holds up five fingers in a prediction of how many rounds it will take him to knock out British boxer Henry Cooper in London, May 27, 1963. Len Trievnor/Express/Getty Images
An Appreciation

What if the Muhammad Ali we knew had never existed?

From his brief kinship with Malcolm X to the ‘Thrilla In Manila,’ five alternative universes for Ali — and the world

From Michelle Obama, Dwyane Wade and Betty White to Steve Harvey, Jan. 17 offers an embarrassment of riches for celebrity birthday followers. One name in particular, however, towers above the others: Muhammad Ali. The self-proclaimed and globally anointed “Greatest” would have been 76 today. To say Muhammad Ali is an inspiration for Team Undefeated is an understatement.

Loved and feared, Ali was captivating and personable. Flawed and fearless. An unparalleled showman and a ruthless instigator. There are few stones left to turn over on Ali, a man whose life has been under the microscope since he burst onto the scene at the 1960 Olympics — the Summer Games that also introduced Oscar Robertson and Wilma Rudolph to the world. How Ali’s life played out is American scripture. But what if there’s an alternative universe in which certain things panned out differently? In some ways, thankfully, we’ll never know. But in others? Follow along …

What if young Cassius Clay’s bike had never been stolen?

If anyone represented the embodiment of the phrase “When life hands you lemons, make lemonade,” it’s Ali. This story has been told a million times, but it’s always fascinating because of the butterfly effect. A 12-year-old Cassius Clay sat on the steps of the Columbia Auditorium in his hometown of Louisville, Kentucky. He was angry and sobbing. Joe Martin approached young Clay. “If I find the guy who took my bike,” Clay told Martin, “I’m gonna whup him.” Martin ran a boxing gym and told the adolescent if he was going to fight, he’d better learn how to fight. Until that point, Clay had never given a thought to boxing.

The rest, as they say, is history. If his bike is never stolen, who’s to say he doesn’t go through life as a normal kid who doesn’t even care about boxing outside of the occasional fight? And what if that same kid one day gets drafted into the Vietnam War — a battle Cassius Clay from Kentucky would have had to fight because he wasn’t a heavyweight champion of the world with religious beliefs that forbade it? It’s wild how life can change in the blink of an eye. We’ll just leave it with this: Theft is a crime and should be treated as such. But bless the soul of the person who decided to steal this kid’s bike. That’s one time when doing bad actually did a world of good.

What if Malcolm X and Ali never had their falling-out?

In order to survive, as a great man once said, we all have to live with regrets. One regret for Ali was his all-too-brief bond with Malcolm X, a fellow product of the Muslim teachings of Elijah Muhammad. X fell out of favor with the teacher, and Ali chose to follow Muhammad’s lead. At the time of X’s assassination in February 1965, the two were not on speaking terms. Never apologizing to Malcolm haunted Ali for the rest of his life. “Turning my back on Malcolm was one of the mistakes that I regret most in my life,” he wrote in his 2004 autobiography The Soul of a Butterfly: Reflections on Life’s Journey. “I wish I’d been able to tell Malcolm I was sorry, that he was right about so many things. … I might never be a Muslim if it hadn’t been for Malcolm. If I could go back and do it over again, I would never have turned my back on him.” For a fascinating and detailed breakdown of their life and times, check out Johnny Smith and Randy Roberts’ Blood Brothers: The Fatal Friendship Between Muhammad Ali and Malcolm X.

What if Ali didn’t sacrifice the prime of his career by protesting the Vietnam War?

The better question is, what if the U.S. never involved itself in Vietnam? Whatever the case, Ali’s exile turned him into a larger-than-life figure. At one point in American history, world heavyweight champion was the most coveted title in all of sports. Here was Ali: a young, handsome, outspoken black man who not only dismantled opponents in the ring but also took on America’s ugliest parts in a verbal fashion that has not been seen or heard from an athlete since. And he did all of this while looking the federal government square in the eye, essentially saying, “Come and get me.” Although legions of critics took a carousel-like approach to demeaning him, Ali’s popularity had skyrocketed by the end of 1967. His stated reason for objecting, “I ain’t got no quarrel with them Viet Cong,” is tattooed in the fabric of American race relations. Ali’s most controversial fight, for his beliefs and for our dignity, reverberated worldwide. It cost him the years of 1967-70, when he would’ve been between the ages of 25 and 28 — a fighter’s peak years. As transcendent as his career was, even four decades after his final fight, we’re left to wonder how great it could have been if Prime Ali hadn’t been entangled with the U.S. government at that same time. Which bleeds into the next alternative universe …

What if Ali called it quits after the third Frazier fight?

Maybe it was a subconscious thing, for Ali to make up for lost time in the ring as he continued to fight in his later years. Maybe it was financial. Maybe it was a combination of both. Whatever the reason, the cold reality is that his last iconic moment in the ring was 1975’s “Thrilla In Manila,” the end of the trilogy with Joe Frazier. The fights — Frazier handed Ali his first career loss shortly after he returned to boxing in 1971, and Ali won the 1974 rematch — define perhaps the greatest rivalry in sports history, with an extremely brutal and even more bitter feud spurred largely by Ali’s vicious and grossly disrespectful racial taunts toward Frazier. Their final clash proved a potluck of haymakers, blood and near-death premonitions. “It was next to death,” Ali said after the fight — a contest he actually won. “When a fight as hard as this one gets to the 14th round, you feel like dying. You feel like quitting. You want to throw up.” Frazier was never the same after that fight.

And it took decades for Ali and Frazier to quash their beef. By the time Ali called it quits in December 1981, Ali was a beaten and battered man and his Parkinson’s disease was imminent. Those closest to Ali’s former cornerman and doctor, Ferdie Pacheco ( who died in November 2017), say he lived with remorse for not having saved Ali from himself. He begged the boxer to quit after the third Frazier fight. Studies from Arizona State scientists discovered Ali’s speech slowed down 26 percent between the ages of 26 and 39 and he was visibly slurring his speech in 1978 — three years after the final battle with Frazier.

Would calling it a career after the Thrilla In Manila have saved Ali future medical concerns? Who knows. A trilogy with Ken Norton — one of the hardest punchers of all time, who broke Ali’s jaw in their first match and whom some feel Ali lost all three fights to — came with its own undeniable punishment. After his 1977 fight with power puncher Earnie Shavers, who landed a massive 266 punches, Ali’s speech reportedly slowed 16 percent from prefight calculations. “Ali did damage to himself, and he knew it and kept boxing too long,” says Jonathan Eig, author of last year’s Ali: Life, “but he didn’t have the information we now have about CTE [chronic traumatic encephalopathy].”

What if Parkinson’s had never robbed Ali of his most powerful punch — his voice?

Ali’s decision to boycott the Vietnam War was supported by many black athletes and large pockets of the black community, but Ali was also media-blitzed from all corners. A May 2, 1967, New York Times editorial theorized that the support Ali was hoping to generate would never develop. The late political reporter and columnist Tom Wicker called Ali “… this strange, pathetic Negro boxer superbly gifted in body, painfully warped in spirit.” Less than a week later, the harsh attack on Ali’s character was rebuked by Boston University professor Theodore Brameld who said, “… because, with his warped spirit, he has the courage and integrity to refuse to participate in a war that millions of us with weaker courage and weaker integrity, and certainly far less to lose, continue to tolerate against our own consciences?”

Much like Martin Luther King, Ali’s legacy, in many ways, has been sanitized. Ali only became a truly lovable figure (to some) once he lost his ability to speak. When he no longer could use his actual voice to deliver knockouts, he was no longer a threat (again, to some) to the status quo. Ali’s political beliefs had always come under fire from both sides of the aisle. But the reality is that Americans 35 and under have no recollection of the charismatic ball of energy that earned him global acclaim and domestic scrutiny. Some prefer this image of the legendary boxer. Ali, the heavyweight champion who continued to vibrantly and verbally shake up the world into his latter decades on earth, is a bracing thought. Seeing Muhammad Ali minimized and marginalized by a handful of quotes and yearly tributes that fail to paint the full features of the man — that is beyond scary.