On Monday, members of More Than A Vote urge fans to take action in 2020

The letter, which was shared with The Undefeated, is addressed to “our fans of every age, race and gender.”

“We saw you in the streets,” the letter reads. “We saw your social media posts. Your voices are breaking through, but it’s now time to do more. We know you have the ability to organize. So join us and take your protest to the election and fight to keep our community from being silenced.

“The most important thing you all need to know is Black voters matter more than ever.” 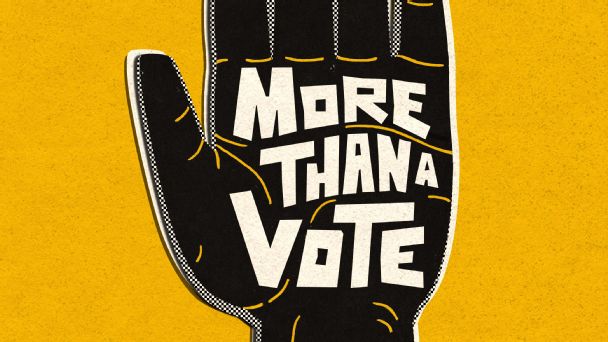 More Than A Vote: A letter to fans to fight Black voter suppression Read now

Led by James, a long list of high-profile athletes and entertainers announced in June the start of a nonprofit organization called More Than A Vote that is focused on getting more African Americans to the polls. Last week, the organization announced that it was partnering with the Los Angeles Dodgers to make Dodger Stadium a polling place for the November general election, marking the first time a Major League Baseball team has offered its facility as a voting center.

In Monday’s open letter, the organization states that “one solution that More Than A Vote is working on is to convert as many arenas and sports facilities as possible into voting precincts.”

James said More Than A Vote was formed in the midst of the current fight against police brutality, social injustice and other racial issues that were sparked after George Floyd, a 46-year-old African American man, died while a white police officer kneeled on his neck for nearly nine minutes on May 25 in Minneapolis.

“This all came together during the protests against police brutality,” James said in a statement to The Undefeated. “All of us were angry, which we still are, and wanted to do something with real impact right now. We didn’t want to talk about it. We organized around voter suppression in our community because it’s very real and if we want actual change, it’s going to start by educating, energizing and protecting Black voters in 2020.”

“Athletes have a tradition of speaking out against injustice, but we want to take it to the next level through More Than A Vote by tackling voter suppression against Black people in all of the ways it manifests itself,” said Montgomery, who plays for the Atlanta Dream but decided to skip the 2020 WNBA season to pursue social justice reform. “We’re in a unique position to energize and speak directly to young Black people about the importance of voting in this election and we can give them the tools to fight back against the forces that want to prevent them from doing so.”