The iconic cover — and video game character — is a broken promise 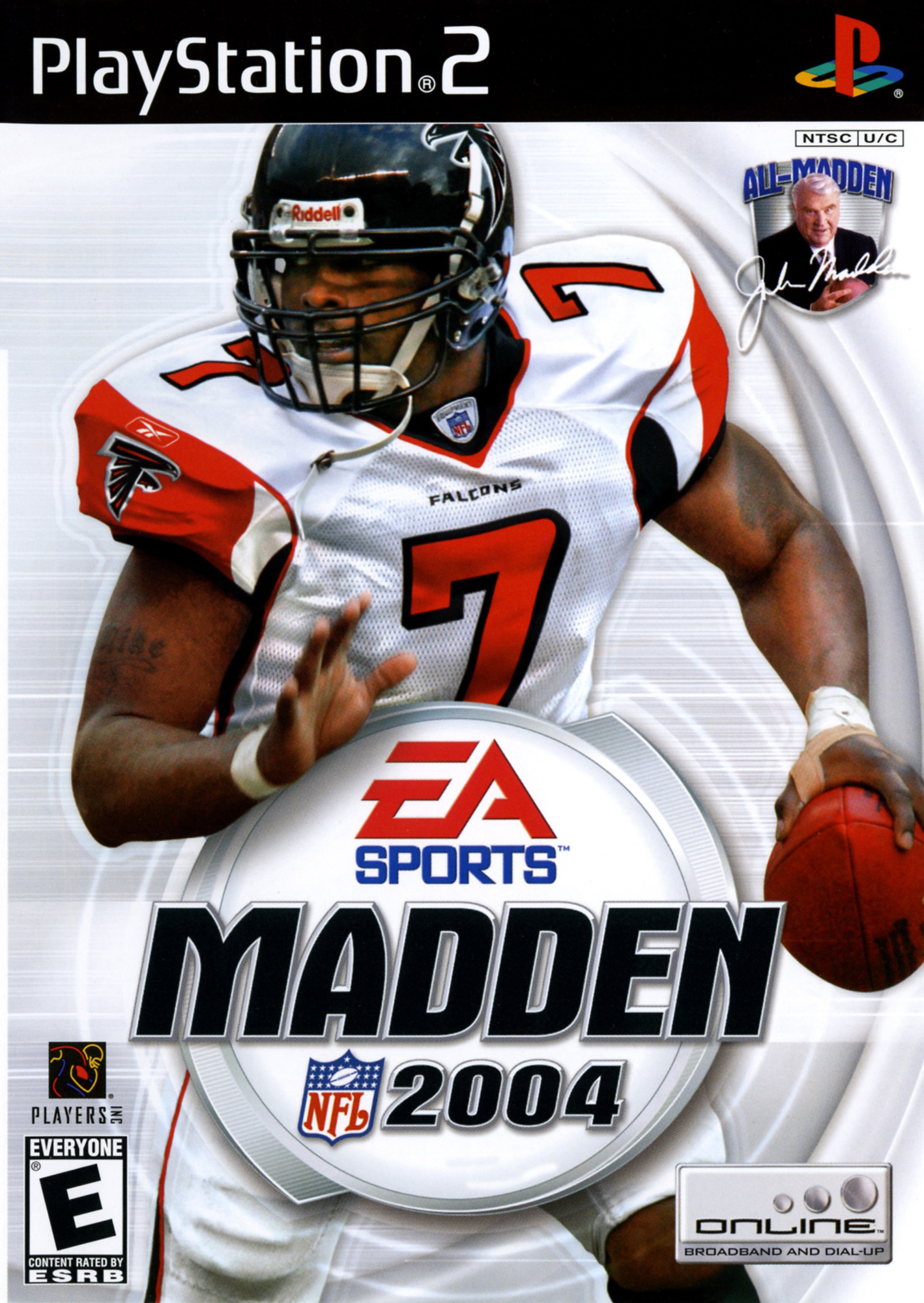 Tennessee Titans running back Eddie George became the first player to grace the cover by himself across all platforms — for Madden 2001 — as the game continued its ascent to become a pop culture cornerstone. A few years later, for Madden 2004, there was Atlanta Falcons quarterback Michael Vick on the cover. Vick’s presence on Madden symbolized more than just his great play. It seemed to indicate a readiness from the masses for a black quarterback as the face of the NFL — something black America had been awaiting for decades.

The phrase rang out from kids’ rooms and dorm rooms and from grown folks’ living rooms a lot in 2003. There are certain characters in the history of sports video games that, if picked, elicit scoffs from an opponent. It’s because the video game versions of them are impossible to beat. Vick’s video game dominance was a reflection of how developers — and the general public as a whole — saw Vick on the field: as superhuman. “For Vick,” Donny Moore, EA Sports’ “ratings czar” told Stick Jockey in 2013, “we knew this was going to be a game-changer.”

And in turn, as has historically been the case, Vick’s video game abilities only elevated his real-life sports legend. Former NFL running back/Major League Baseball outfielder Bo Jackson is as large a legend for his dual-sport dominance as he was for his invincibility in the late-’80s Nintendo game Tecmo Bowl (it’s back). It was impossible to beat boxer Mike Tyson in Punch Out. And when Chicago Bulls superstar Michael Jordan refused to be a part of NBA Live ’96 and the game replaced him with a somehow more dominant “Player 99,” picking the Bulls was basically like putting in a cheat code. These athletes — Tyson and Jackson especially — are indelibly linked to their video game counterparts when we discuss their legendary careers.

Vick’s Madden presence seemed to indicate that the black quarterback had gone mainstream. It’s 2016, and I’m astounded that I was ever that naive.

I can still see the cover image when I close my eyes: Vick holding the ball loosely in his left hand, scrambling to his left, eyes down the field looking for the next hole. Vick was rated 90 (out of 100) overall with a speed rating of 95, 97 in accuracy, 98 in throwing power and 92 in elusiveness. It was easier to tackle steam than it was to tackle Vick, and he threw the ball farther than any other player. There just wasn’t an answer for him. In fact, Vick damn near broke the game itself.

“Michael Vick was the greatest quarterback in Madden history, because his speed rating as a QB was astronomical, and there was nothing you could do stop him,” Clint Oldenburg, former NFL lineman and current game developer with the Madden franchise, said in an interview with Gamesradar. “For a number of years before I got here, features were added to the game specifically to stop Vick. Now [to prevent one player from being similarly overpowering] we try to keep ratings within a certain range. So if a QB comes out of the draft with a 99 speed rating, A, B and C is done in the game engine to make sure everything is balanced.” And as great as Vick was on the field in the time he played for the Falcons, his status as unstoppable video game foe only added to his legend status.

There’s probably no position in sports that elicits more pride and passion in the black community than the quarterback. For decades, sports fans and sometimes even experts have drenched their quarterback talk with coded language to explain why white players are just more equipped to be quarterback than black players. Vick’s appearance on the Madden cover was a visual rebellion against those archaic beliefs. Even as a rival New Orleans Saints fan, I couldn’t find it to hate Vick. He had come to New Orleans and torched the Who Dat Nation and I still couldn’t help but appreciate his greatness. I’m not alone. I’ve heard black people from barbershops to cookouts say the same thing when talking about Super Bowl hopes: “If my team doesn’t win, I at least want [insert name of winning black quarterback here] to get a ring.”

And that’s why — even as Super Bowl quarterbacks such as Cam Newton, Colin Kaepernick and Russell Wilson have come along — we’ll never forget Vick. In 2001, he was the first-ever black quarterback to be drafted No. 1 in the NFL. After a rookie year pretty much on the bench, the reins were removed and the promise of Vick came to fruition. He captured our imaginations — he was someone who could finally end our plight as black fans. Vick’s star-making performance came against the Minnesota Vikings in week 12 of his second season. He set the record for rushing yards by a quarterback with 173, and capped off the performance with a dazzling 45-yard game-winning touchdown run — the 2002 image of two Vikings defenders running into each other trying to tackle him is iconic.

Two months later, Vick became the first quarterback to lead his team to a playoff win in Lambeau Field by beating quarterback Brett Favre and the Green Bay Packers. With that win — and the 2002 season as a whole — Vick solidified himself as a top-tier player in the NFL, and someone who could capture the imagination of fans across the country. So even though Minnesota Vikings quarterback Daunte Culpepper graced the cover in 2001, his video game counterpart wasn’t as dominant and thus wasn’t as big of a cultural moment as Vick’s. Vick’s Madden presence seemed to indicate that the black quarterback had gone mainstream. It’s 2016, and I’m astounded that I was ever that naive. I never would have thought, back when Vick was on that Madden cover, that quarterbacks would still be standing behind podiums in news conferences answering questions about their blackness and its impact on their performances. The cover felt like a promise of acceptance for Vick and black quarterbacks. The promise wasn’t kept.

Why white folks focus on dogs and yoga / My people on the low end trying to ball and get over. — rapper Common on his 2007 song The People.

We all know what happened next for Vick. He had more impressive seasons with the Falcons (even though he fractured his fibula in the season following his Madden cover, adding credence to the “Madden Curse” urban legend). But in July 2007, Vick was indicted for funding and participating in “Bad Newz Kennels,” an interstate dogfighting ring. The media was inundated with gruesome images of dead dogs scattered around Vick’s compound in Virginia.

It’s crazy to look back on 2007 from the Black Lives Matter era and think about how a professional athlete and dogfighting was once the biggest race-related story of a given year. But it was. To people waiting for a fly in Vick’s ointment, it was inevitable that the quarterback from the ‘hood would get involved with something criminal and end up in jail. For so many black people exposed to injustices on a national scale on a regular basis — the Vick scandal occurred less than two years after Hurricane Katrina — the outrage over dogs seemed an insult.

He never quit. And that’s as inspiring as any 40-yard dash time or bullet pass down the field.

It felt like white people were more worried about the treatment of dogs than they were about the black people who grew up in the type of poor Newport News, Virginia, neighborhoods in which Vick was raised. It felt like white people cared more about dogs than they did for black lives and were using it all as a reason to undermine not just any black millionaire, but a black quarterback — a position that has historically been resisted if not despised by white America.

A decade after that cover, Seattle Seahawks quarterback Russell Wilson became the first black quarterback since Doug Williams of the Washington Redskins (in ’88) to win a Super Bowl. But for some, Wilson didn’t register as a true black quarterback for a bevy of silly reasons: his corniness, his white wife at the time, his privileged upbringing and the fact that his defense was the real machine that carried the team to the championship. In 2015, Newton, a quarterback perceived to be blacker than Wilson, spent an entire season under scrutiny because he smiled, danced and dabbed his way to a Super Bowl loss. Analysts questioned his ability even as he powered his team to a 15-1 record. And now Newton, as the 2016-17 season begins, seems so fed up with the focus on race that he’s looking to dismiss any black quarterback talk that comes his way. It’s been 13 years since Vick was on the cover of Madden and we’re still treating great black quarterbacks like their successes are rare occurrences or fads instead of long-lasting signs of impending dominance.

As for Vick, he managed to land back in the NFL after serving his prison time, playing with the Philadelphia Eagles in 2009. Vick was a Pro Bowler for the 2010 season, led the Eagles to a 10-6 record and a playoff berth. In fact, after that season, when Madden had shifted to fan votes to determine who would be on their covers, Vick was a near miss coming in second place to Cleveland Browns running back Peyton Hillis. The votes were as much a reflection of Vick’s great comeback year as nostalgic reverence for the last time he was on a video game cover —when he changed the franchise forever.

His miraculous return to the league after two years off is as much a testament to his perseverance as it is to his insane physical gifts. But Vick has mostly bounced around the league since then, spending a couple of years in Philadelphia before moving to the New York Jets and the Pittsburgh Steelers, both times as a backup. Now Vick is a free agent with an outside shot at making a team 14 years into his career.

He never quit. And that’s as inspiring as any 40-yard dash time or bullet pass down the field. He hasn’t been, and will never be, the same Michael Vick that graced the cover of Madden. But he’s pulled himself up from rock bottom and will leave a legacy of being lightning in a bottle for the NFL and black America.

That Madden cover, and hitting R2 for a quarterback scramble to torment your friends, was the pinnacle of Vick’s career and a moment of pride for people who remember what Williams had to go through. I wish I could blame what’s happened in the decade since on a curse or some supernatural stretch of bad luck. But unfortunately the lack of progress is symptomatic of a society still uncomfortable with blackness in many spaces. Now when I look back at Vick on the cover of Madden, I see how much farther the world has to go to treat black quarterbacks like they belong.