She also flies an F-16 Fighting Falcon. She’s a wife, a mother of three and she became the first African-American fighter pilot to face combat in a major war – representing our country in Iraq.

When you’re the first of anything, there is a lot of weight on your shoulders to maintain who you are and how you do it in the face of immense pressure. But it’s no problem for 40-year-old Hopper.

Her military service includes flying over 50 combat missions during the Iraq conflict. She received four Air Medals and the Aerial Achievement Medal for her bravery.The veteran Air Force fighter pilot is now in the reserve and is a T-38 flight instructor.

Despite making groundbreaking history, Hopper is still plumbing her mental and physical depths. She is spending her time preparing for a journey to Kona, Hawaii for her newest adventure – the 2016 Ironman World Championship.

“I am just so thankful the Ironman invited me to go do this and very excited about the experience and just the opportunity to race in Ironman,” Hopper told The Undefeated. “It’s a once-in-a-lifetime experience.” 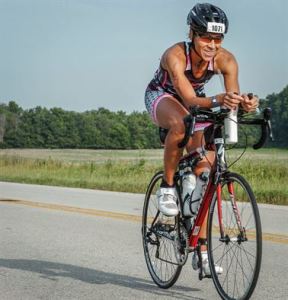 Hopper says faith is part of her identity.

Hopper’s balancing act is not easy. Between holding a position as a part-time reservist and training for the Ironman competition, she relies on her husband – who is also a fighter pilot – to help her balance it all.

“It’s sometimes a delicate balance and sometimes it’s very hard. I will say that anything you take on in life that’s extremely challenging, like going to pilot training or like training for an Ironman, requires an incredible family support behind you,” she said. “I would say that my husband is incredibly supportive. He supports what I do. When he’s home, he takes the kids to school so that I can train early in the morning and get my training done and then I’m able to get off to work. I try to get everything done before the kids are up. And that allows me to help them get their breakfast or find stuff that they can’t find for their school to help them get ready so that they can get out the door on time so that my husband can get out the door on time.”

Hopper grew up in the military family. She was born in Norway and lived in Greece for a short period of time before moving back to the United States when she was 4. Coming from a biracial family, she experienced racism from both ends.

“Overseas it was very interesting because we didn’t experience racism in the same way that you would experience racism in the United States. So overseas it was, for example, the Greeks did not like Americans, so it was racist against the American nationality, and so it was kind of like the Americans and the military families of the naval families, you know, families that we were there with, we were united, and so I didn’t feel so much discriminated against for ethnicity when I was overseas.

“Well, when we moved back to the States, we initially moved to Pittsburgh, Pennsylvania. And when I was in Pittsburgh, we went to an all-white school and that was the first time that I experienced racism. I remember attending my kindergarten class and the kids were making fun of me because my skin wasn’t the same color and they were calling me names like zebra and oreo because my parents were interracially married so I wasn’t quite black but I wasn’t quite white and so it wasn’t … I kinda didn’t fit in.”

Hopper discovered swimming at the age of 7. She and her siblings took classes and she began to swim competitively.

“This is where I think sports became a very important part of my life,” Hopper said.

“When my siblings and I started becoming good swimmers, it didn’t matter so much to people anymore the color of our skin, what they liked was the fact that we were good athletes and that we were winning for their team. And that began to open up doors for us in our lives.

Hopper said her courage comes from her relationship with God.

“Honestly, I think that because I know who I am, I know that even when I’m struggling and when things are hard that it doesn’t change who I am and so that gives me courage to keep getting back up even when I fail. And when I struggle or make mistakes, I realize that I’m forgiven and that I can get back up again.”

As Hopper reflects on her life, she stops to take note of the amount of knowledge and confidence she received from her father, who was also her swim coach. His encouragement in being an athlete helped mold her into the courageous woman she is today.

“The other person that I feel like later in life has given me great courage is my husband,” she said. “There have been times as a pilot, and particularly a female in the fighter community, there were times when I felt like unsure of myself, am I qualified to be here? Am I as competent as my male peers? When I was going from being a wingman to becoming a flight lead and actually leading another aircraft around or leading multiple aircraft around, I wasn’t sure if I was ready to make that jump. And my husband is the one who would give me courage in those instances, because in those instances he would tell me that he felt like I was competent and that he knew that I could do these things and that I should not be afraid.”

Hopper said she is thankful for her fighter pilot achievements because it’s put her in a position to do more.

“I can say now is that I feel thankful for the fact that I was put in that position, because now it’s given me a wonderful opportunity to be a mentor and a role model for other women and to show them that anything is possible. Just because you haven’t seen somebody doing it before doesn’t mean that it’s not a possibility,” she said.

“And I think that pairs nicely with the Ironman story because Ironman is something that is, when you tell people what an Ironman is and what it entails, they usually look at you like you must be crazy, and then the second thing they say is I either could never or would never do that. And so they think it’s great for you but they would never do it or could never see themself doing it.”

She received an academic scholarship to the University of Texas where she was on the swim team. She joined the ROTC. After her first semester, she was awarded an ROTC scholarship and decided that’s where she wanted to go with her career. That was in 1998. More than a decade later, she has gained experience and achievements that have exceeded her expectations.

“I just went through the doors that were opened for me, step by step and went down the path that I felt God was leading me on and as I went through each of those doors then those types of titles came much later.”

Now she is balancing life, nutrition and training as she takes on her Ironman challenge.

This Story Tagged: Get Lifted Daily Uplift Ironman The Next Chapter