“Many people think I’m related to Eddie Robinson, but I’m not. But I did meet him in college. He’s one of the reasons why I coach today,” Robinson, 52, said of the man who coached at Grambling for 56 years and had 408 career victories, a record that stood until 2003.

“We met after they just whipped us at Grambling. He and [Alabama State] Coach [Houston] Markham, my coach at the time, were great friends. When Eddie Robinson and I talked, we talked a little about where I was from and why I chose to play football. I knew then he would be my inspiration.”

Robinson’s first major challenge is the Cricket MEAC/SWAC Challenge in Atlanta on Saturday, when the Hornets will play Howard. Alabama State played Howard for the first time in 2004 at Ford Field in Detroit, and the Hornets won 27-12.

“We are in a great space. We are taking things one game at a time, and it just so happens that it’s one of the biggest games of the season,” Robinson said on July 21.

Robinson returned to his alma mater in November 2021, where he’d been a three-time All-SWAC selection, SWAC Defensive Player of the Year and an All-American. Alabama State head coach is his first coaching job.

“These guys have the talent to be great,” Robinson said of his team, “and it’s my job to lead them to where they want to go. Everyone is on the same page. These players practice what is preached from their head coach, and that will take us a long way.”

“He is a hard worker,” Robinson said of Irshaad Davis, “one of the hardest workers on the team, and I’m happy to be able to coach guys like him.” Dematrius Davis also attended the media day with Robinson.

This is a new experience for Robinson. Houston selected Robinson 50th overall in the second round of the 1992 NFL draft. He played for the Oilers, Jacksonville Jaguars, Buffalo Bills, and Tennessee Titans, where he went to Super Bowl XXXIV. 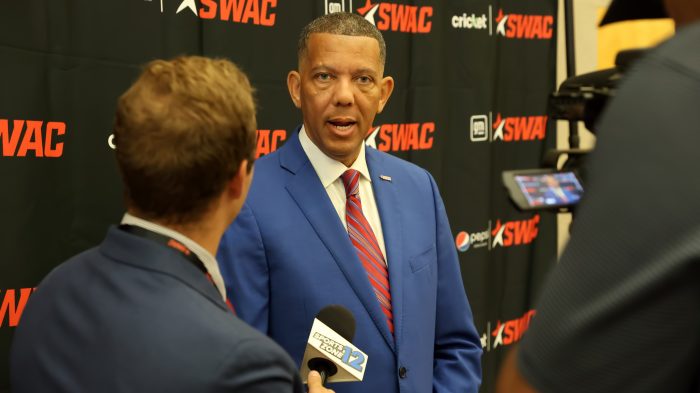 After 603 tackles, 23 sacks, and six interceptions in 11 NFL seasons, Robinson began broadcasting. First regionally, co-hosting Inside SWAC from 2006 to 2009, then as a football analyst for Fox Sports South, ESPNU, ESPN3, and Comcast Sports South from 2005 to 2014.

Robinson believes that players from historically Black colleges and universities (HBCUs) can make it to the NFL.

“I came back to coach just to give back to the university that made me who I am today,” he said. “If one of my players comes to me and says they want to go to the NFL, I’ll tell them how to get there.”

For him, the recipe is hard work and dedication: “You have to do a little more than the next guy, watch extra film, be the first to practice, be the last one to leave practice, and most importantly, make football your first priority. If you can’t do those things, you don’t have what it takes to make it to the NFL. If you can do those things, I promise I can get you to the NFL, but it starts with you.”

Robinson sees HBCUs starting to get the recognition they deserve and more top Black recruits choosing them with a purpose. “Kids are coming to help prove a point. We are playing for us now, and with that being said the support will follow and help us achieve the goal we are trying to achieve.”