No one loves an underdog story more than Decobie Durant. Being overlooked and underestimated before triumphing resonates with the graduate defensive back, who went from SC State walk-on to Mid-Eastern Athletic Conference (MEAC) Defensive Player of the Year.

The 5-foot-11 Durant arrived in Orangeburg, South Carolina, in the spring of 2018 after a stint at Palmetto Prep Academy hoping his play would do all the talking for him. Lightly recruited out of Lamar High School, an area known for producing NCAA Division I level talent, he wanted to prove himself on the field beyond all else. He embraced humility and promised the Bulldogs coaching staff they wouldn’t regret giving him a chance.

Durant earned a scholarship the following spring and became a formidable force in the MEAC. As the 23-year-old receives accolades and awards, his underdog mentality hasn’t subsided. Memories of fighting for that scholarship are fresh and Durant holds onto the motto, “The dog has to be in you, not on you.”

“It just really means you got to be a dog. You just got to lay everything on the line and go out and produce and give it all you got,” Durant told The Undefeated. “I feel like I was destined to be in this position. I grinded all my life. I was overlooked all my life. I just trusted myself. It means a lot knowing that I’m just coming in [and] taking it one day at a time. I’m trusting myself [and] believing in myself.  I’ve had a good support system throughout this journey.”

In 11 regular-season games, Durant finished with 37 total tackles, led the MEAC with 14 passes defended, and tied for second with three interceptions, two of which came against FBS powerhouse Clemson. Durant attributes his interception skills to being a two-way player in high school. At Lamar High School, Durant played quarterback, wide receiver, and defensive back and during his senior season, helping lead Lamar to a Class A, Division II state championship. 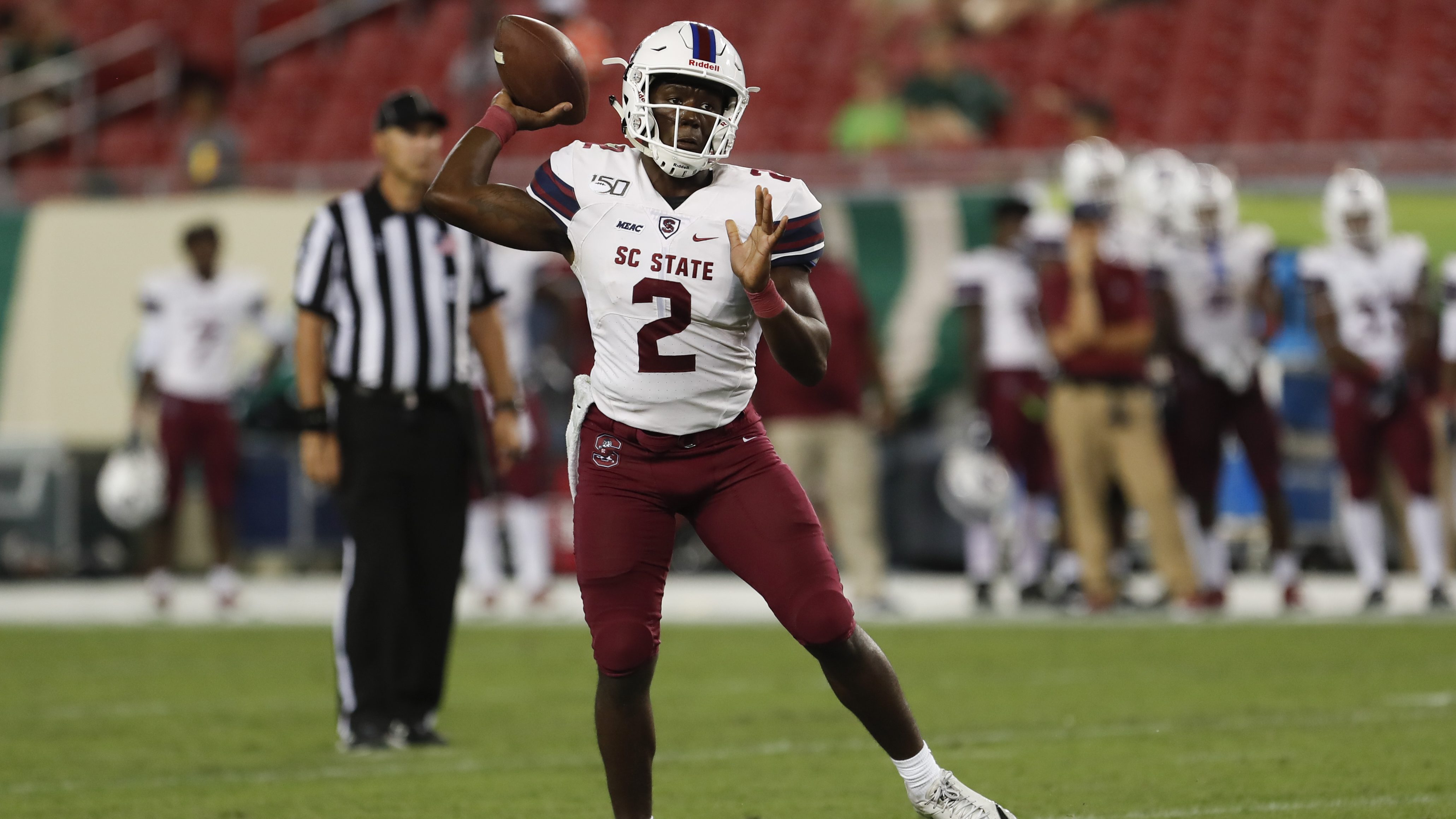 “I guess you could say I got magnets on my hands,” Durant said with a big laugh. “If the ball comes my way, I got good ball skills. I can track the ball very [well], it’s something I’ve always been able to do. In high school, I played quarterback and receiver [and] it allows you to get a one-up on the offensive side of the ball. Especially when you’re on defense, you notice different tendencies of the offensive player so it really helps.”

In big games, the Bulldogs can count on Durant to make big plays. In an early-season matchup against then-No. 6 Clemson, Durant intercepted then Heisman Trophy-favorite quarterback DJ Uiagalelei, and is the only player to intercept Southwest Athletic Conference (SWAC) Player of the Year Aqeel Glass three times in one game during the spring season.

“Decobie Durant is a defensive back that when you think of defensive backs, you think of skilled guys who can run and jump and knock balls down. Decobie [has] the mentality of a defensive tackle. [He’s a] tough guy who can get in the middle of all of the different kinds of screens and perimeter throws,” said SC State head football coach Oliver “Buddy” Pough. “We didn’t see a lot of attempts against him this past year because people got the message this might not be the guy that you mess with.”

Durant’s ascension to top defensive player isn’t a surprise to his family, it’s more of an expectation.

Durant is following the family tradition set by his older cousins Michael, Markee, and Marquais Hamlin. Michael Hamlin played safety for Clemson and was drafted in the fifth-round of 2009 NFL draft by the Dallas Cowboys. He also played for the Jacksonville Jaguars before venturing into coaching. Markee and Marquais Hamlin both played safety for SC State and were members of the 2008 and 2009 MEAC championship teams.

“Growing up, I always wanted to be like them. Especially when I started out in rec football. I used to change numbers every year to wear their football numbers,” said Durant of his cousins’ influence. “I’m just following in their footsteps as I go through middle school, high school and college. It’s fun especially watching them play and sitting in the stands and getting a chance to go into the locker room and see different things at a young age.

“Now things have changed and time flies by. They come to watch me play now. So it’s a blessing for all of us to actually witness each other go through this process.”

“I think I got up on them because I won defensive player of the year. They don’t have that trophy,” Durant said matter-of-factly. “It’s all fun and games. I always get on them about me being the best defensive player at our position. They always end up saying that I got mixed traits from all three of them. I guess I can go with it.”

Spending years under the tutelage of his cousins, Durant embraces being a leader and mentor for a young SC State secondary. Durant encourages the underclassmen to ask questions and doesn’t hesitate to answer them himself. Realizing his collegiate career is coming to an end, he takes pride in building the secondary for the future. His message to his younger teammates: Trust your brother, play your part, and everything and everyone will fall into place.

“He sees when the young guys mess up and he’s not afraid to correct guys when need be,” said Jonathan Saxon, SC State defensive coordinator. “He can light up a room. He’s intelligent as a football player. He has a love of the game and he studies it thoroughly with a fine-tooth comb. He has NFL guys they watch like Jalen Ramsey, Tyrann Mathieu, Xavien Howard. He’s got a lot of guys that can take something from a study of the game that way.”

Durant idolizes Mathieu. The garnet and navy No. 14 Durant wears is a tribute to Mathieu, who wore the number his first year at Louisiana State. Former SC State teammate Alex Brown gave Durant a signed pair of Mathieu gloves when Brown was a member of the Kansas City Chiefs. Considered one of the MEAC’s top pro prospects, Durant hopes to do a jersey swap with Mathieu in the NFL. Until then, he’s preparing for the Cricket Celebration Bowl on Saturday against Jackson State.

While in Las Vegas to accept the official MEAC award, Durant spent his downtime watching game film on Jackson State, jotting down notes and sending text messages to his teammates about different formations and Tigers’ offense. In practice, he’s been working on communicating more effectively and recognizing formations. Off the field, he’s been meditating on a biblical Scripture book his mother gave him years ago that helps keep him calm and confident during big games. For now, Durant is contemplating which Scripture to write on his gloves for the Celebration Bowl and what he needs to do to win in his final collegiate game.

“Really trusting who I am. Just going out there keeping the faith in God. I just like to play big games,” Durant said. “The stage is bright but you can’t let the bright side of it get to you. Just got to go in and play ball.

“I’m just going to play fearless each and every snap [and] try to dominate. And do what I have to do to help my teammates produce as well. Everybody has a role on the team. My role is to shut down the best receiver. So I try to do that the best way I can.”