Masai Ujiri incident equally haunting as it is redeeming

Sometimes it feels like we really can’t have anything. In June 2019 in Oracle Arena, Toronto Raptors president of basketball operations Masai Ujiri’s life must have flashed before his eyes. At the most glorious moment of his career and perhaps life, his freedom, dignity and pride were nearly snatched from him by a courtside police officer — in a moment that was caught on video and is equally haunting as it is redeeming.

To quickly describe the exchange, new footage released Monday shows the officer, Alan Strickland, pushing Ujiri twice and Ujiri not backing down. And when the altercation had ended physically, the clip shows it was certainly nowhere close to over psychologically. In one frame, we see Ujiri, now an NBA champion, walking down onto the court to celebrate with the team he built. There’s a look on his face that every single Black person in America instantly understands. It’s the embarrassing blend of bemusement, confusion, shame but fortitude that sometimes overcomes you when you are faced with a white person in a position of authority who does not respect you.

There’s a look on the officer’s face that says one thing and one thing only: Stay in your place.

And while the dude in the green sweater is frantically trying to keep the peace, Ujiri, in the next 10 seconds, is coming to terms with basically his whole life. (Don’t even get me started about the old white couple pointing at him.) Every single Black person I know has been through this moment. “Am I seriously going to let this person flatly disrespect my agency and well-earned, never mind, well-deserved decency?” “Why am I even thinking about this?” Frustration, often fear, then the chilling feeling of resignation that this is just what it is. Racism ruins everything. And it is never our fault.

I’m going to need video proof that Ujiri actually struck the police officer. From what I read the officer asked him for his credentials. You know damn well who that guy is. I hope his dumb ass gets traffic duty next weekend

Sure, you can probably even say that neither the NBA, the Raptors nor Ujiri should have ever gotten close to that kind of scenario. But you would be wrong. You think it’s a coincidence that he’s currently the only brother running a team in the league? Here’s the thing: The security officers should be there to protect him from people. Not to protect themselves from him. But, yanno, Blackness abides.

After all that emotion running high in the clip, something truly amazing happens. Kyle Lowry, the man who just had the game of his life to silence quite a few people who’d criticized his on-court consistency, saves the day. He reaches out and grabs his boss from the fray, removing him from the mass of people whom Ujiri was trying to navigate in the first place. Not to parse this too closely, but what happened next legit floored me when I saw it in real time.

Before that pick-me-up was done, the two were already in an embrace. Lowry was not just physically removing Ujiri from safety. He was protecting his pride, his respect: his Blackness. Two seconds later, with Lowry hugging him, Ujiri was looking back at what he’d been taken from. He was that close to being another Black man in jail in Alameda County, California, for not having a credential (he had one). 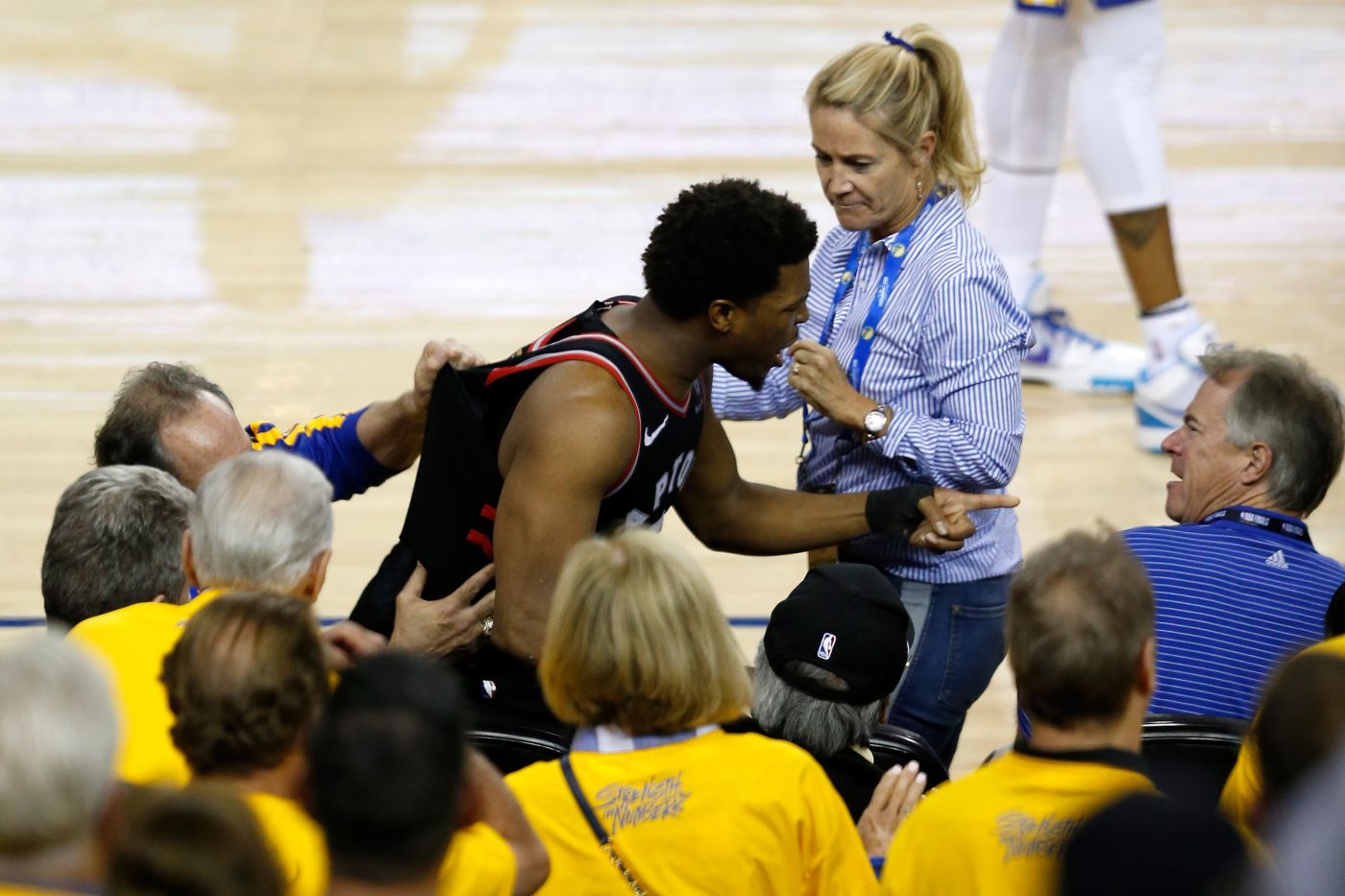 The NBA has an ‘owner mentality’ problem Read now

It’s almost impossible to understand how incredible this moment was from Lowry. Let me remind you that Lowry is the same one who dealt with an actual NBA minority owner shoving him on the sideline after a ball went out of bounds. From the front office all the way down the court, the Black body, in a league with ostensibly the Blackest populace of all pro major sports, gets little to no respect.

Lowry handled that situation with grace, and a level of diplomacy that only the highest-caliber players can. But what happened after Game 6 of the 2019 NBA Finals was different. He was protecting.

If your job is to secure the league and you don’t know who the president of basketball operations is for the team that just won the title, the fault is on the officer and/or NBA security, not on Ujiri.

THIS TOO IS AMAZING pic.twitter.com/6n47VAtFia

At the time, it felt like too obvious an example of how the now gentrified San Francisco Warriors were being forced out of their hometown of Oakland, California, on the Blacker side of the bay.

That was two strikes on the Warriors’ home court in one series. Don’t let it get to three, because, oh, wait, never mind. That’s just a rule America made up to throw Black people in prison for the rest of their lives, in case you forgot.

Kawhi Leonard was a deserving and fantastic NBA Finals MVP. But for this series, Kyle Lowry was the hero.

At the highest risk and having already achieved the highest reward, Lowry told his friend Ujiri the most meaningfully safe thing he could have possibly heard at the time: “We over here.”

Because there’s nowhere else to be when you’re a winner.