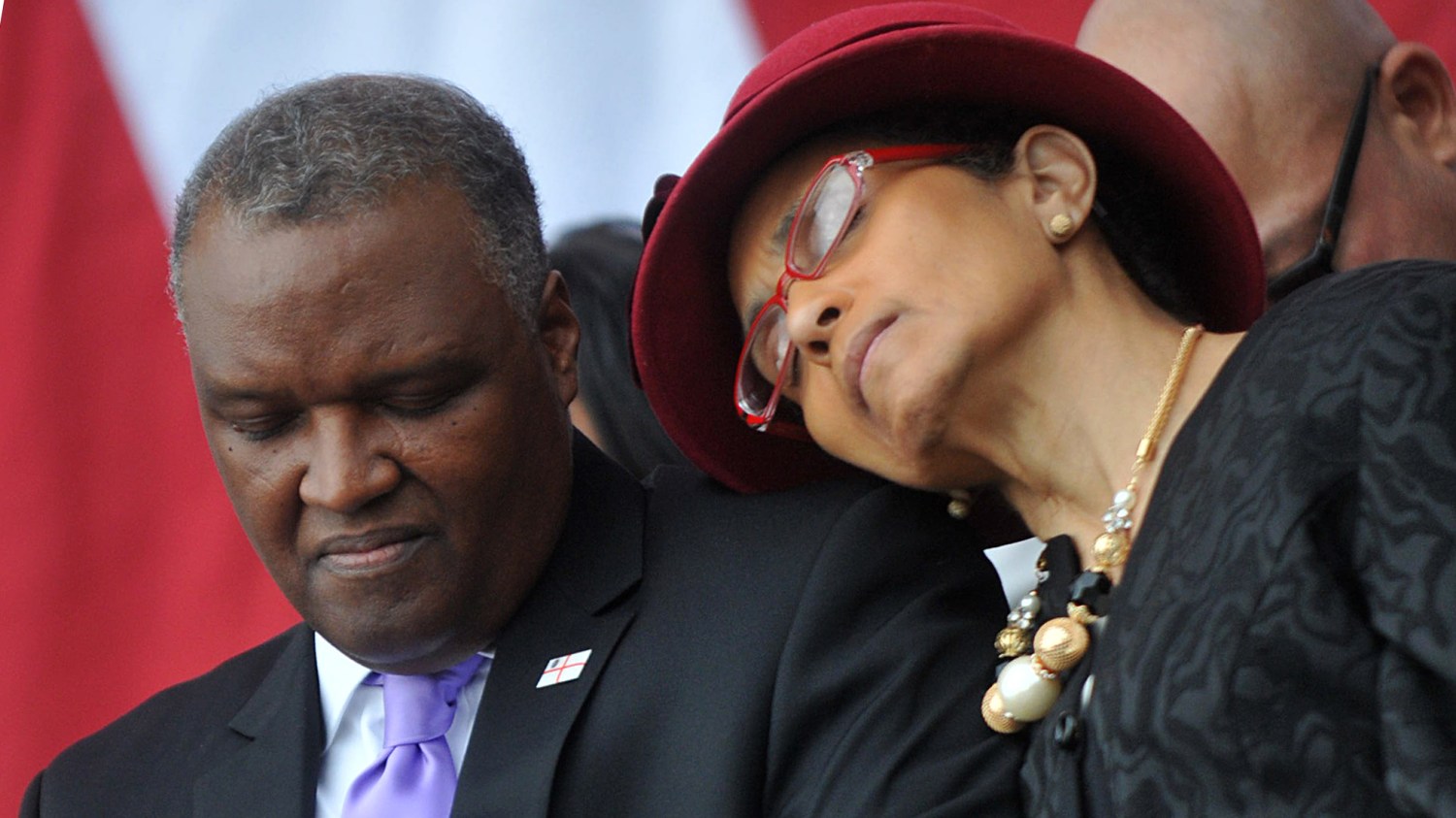 Rushern Baker, of Prince George’s County, Maryland, is part of a growing trend of male caregivers

Rushern Baker is county executive in Prince George’s County, Maryland, a Washington, D.C., suburb that is the wealthiest majority-black county in the nation.

Originally elected in 2010, Baker is halfway through his second four-year term and just announced that he is a Democratic candidate for governor. He oversees a budget of $3.1 billion in a county with a population of 900,000, which makes it the second-largest county in the state.

During his time in office, crime is down 55 percent and he has attracted $12 billion in economic development and 55,000 jobs, according to his spokesman. But today, during an interview in the community room of a busy Wegman’s supermarket near the county seat, Baker is not here to talk about his economic and political achievements. He’s here to talk about his wife, his family and how he does what he does every day.

Baker is the primary caregiver for his wife of 30 years, Christa Beverly, 57, a former attorney who has suffered from early-onset Alzheimer’s disease since 2010. That disease affects 5 million people in the United States.

“I had to pick up from one of the most devastating things in life and move on,” said Baker, 58. “But you continue to live your life. You don’t stop.”

Historically, women have been primary caregivers in families affected by long-term health issues. As a result, their careers, salaries and lifestyles suffered.

But a new report from AARP says that men are increasingly stepping into the role, now representing 40 percent of the nation’s caregivers. Baker sees that trend in his own neighborhood in Cheverly, Maryland, where three neighbors are primary caregivers for their wives, all with Alzheimer’s.

“I realized that there are a number of men who are caring for their wives and parents,” he said. “So, there’s quite a number of us out there.”

Jean Accius, caregiving expert at the AARP Public Policy Institute and author of the report Breaking Stereotypes: Spotlight on Male Family Caregivers, said there are 40 million caregivers in the U.S. “The majority are women,” he said. “Over time we noticed that 4 out of 10, or 16 million, were male: husbands taking care of wives or partners, sons taking care of mothers. They are doing work and not recognized for work.”

The trend is fueled by a population that is aging as people live longer, he said. “Ten thousand people each day are turning 65. Family sizes are changing. There are more women in the labor force. All those things coming together facilitating the number of men doing this work.”

In another high-profile case of early-onset Alzheimer’s, restaurateur, television host lifestyle guru B. Smith said two years ago that she was suffering from the disease at 64 and was shutting down the last of her restaurants. Dan Gasby, her husband of 24 years, is caring for her. Their memoir, Before I Forget: Love, Hope, Help, and Acceptance in Our Fight Against Alzheimer’s, was published last year.

Accius said that despite the stress, male caregivers are generally reluctant to talk openly about it. The report was an attempt to change that. “The amount of work they are doing in addition to a full-time job and juggling working and caregiving is amazing,” he said. “It is a balancing act. It’s something to see the number of men giving injections and helping with tube feeding.”

Baker begins each day at 5:30 to 6 a.m., “so I can get her dressed. She can’t do anything. She can’t dress herself, go to the bathroom or feed herself.

On Fridays and Sundays, he tries to arrange his schedule so he can take her out, maybe to the park or the National Harbor. And on Sundays, there is church. Which leads us to his biggest regret.

“For a long time, I wouldn’t take my wife to church,” he said. “She would fall asleep, she would drool. I didn’t want people to see her in that condition.”

He changed that philosophy after a few years. “When I went [back] to church, it was one of the best experiences. I felt bad that for two years I did not take her.”

He still talks to her and looks for reactions in her eyes. On good days, she recognizes people.

“Everything that she did, we will do,” he said. “When her sorority sisters met in Atlanta for a line reunion, we drove to Atlanta. When they come [to the Washington, D.C., area] she will host a brunch.” They come to the house and greet her and talk to her as they did before she was stricken with Alzheimer’s, he said.

The family first noticed something was wrong in 2008. Christa, or Cis as he calls her, a Howard University graduate with a law degree from the College of William & Mary, had just left her job at the Thurgood Marshall Scholarship Fund and was about to begin a search for a new job. Baker was on a business trip when their oldest daughter, Aja, called. On a trip to her parents’ home in Richmond, Virginia, where she grew up, Christa was lost. She was around the corner from her parents’ home but couldn’t figure out how to get there. There had been other “little things” before, such as forgetting things and losing her keys and glasses.

He tried to talk his wife into seeing a doctor, but she refused. There were several other episodes of her forgetting things or getting lost. She got lost while picking up her youngest daughter, Quinci, from high school, a school all their children attended and where they had driven for eight years. Still, she refused to see a doctor.

Finally, Baker talked to a doctor friend and figured out a way to get her in, under the guise of a medical appointment for him. In the exam room, the doctor also suggested that she test Christa while she was there. She agreed. She passed the brain scan, but the doctor said something was “not quite right” and she should have regular tests.

In February 2010, when she was about to turn 50, Baker took Christa in for a routine exam with a neurologist. The doctor asked her questions. She remembered her children’s names but couldn’t answer a number of simple questions, like the age of the children. Frustrated, she began to cry and looked at him for help with the answers. The diagnosis was early-onset Alzheimer’s.

“When he told us, she was mad and said, ‘I’ll never see this guy again,’ ” Baker said. “But by the time we got in the car, she had forgotten all about the incident. And that started our journey.”

The reason his memory is so vivid, he said, is that after two unsuccessful attempts, he was in the middle of his third campaign for county executive. He considered quitting.

“After the neurology exam, I went to my wife’s primary care physician and said I don’t know if I should run,” Baker said. “He said, ‘I don’t know if you can not run. If you don’t run, she will know something was wrong.’ ” His wife, by then, was an integral part of his campaigns and was well-known in the county.

Today, she can only walk a few steps, so she uses a wheelchair. She doesn’t have the ability to speak or eat through her mouth. “But as far as recognizing people, she has moments when she knows who folks are. She looks great. But a few months ago they had to put a [tracheotomy tube] in to help her breathe.”

“Every day has its challenges,” Baker said. After being in the hospital for three months, she was able to go to their son Rushern IV’s wedding and understand that their youngest daughter, Quinci, graduated from college.

Quinci was 15 when her mother was diagnosed and was a major help in those first two years, Baker said. She is now 22, and she and Aja, 25, recently moved out of the family home, reluctantly, to their own apartment. They are not far away, but he wanted them to establish their own lives.

“They are still there for me if I have a meeting [in the evening],” he said. “I was training for a marathon, and they were there for me.”

His role as caregiver has certainly made him more aware of the challenges facing other caregivers, especially those who work for the county. He has become active in Alzheimer’s groups: Us Against Alzheimer’s, an advocacy group, and the Alzheimer’s Association, which promotes research into the disease. There is now a chapter of the association in Prince George’s County. He and all three children went on a local radio show to raise money for Alzheimer’s research and agreed to get tattoos if they raised $6,000. They did. (Baker’s tattoo of his wife’s initials along with the Alzheimer’s Association symbol is on his right forearm.)

Home care is always an issue, he said. It has to be someone you can trust, because “my wife can’t speak.” One of the nurses who cares for his wife left for another job. “I had to take off a week to find someone.”

It was overwhelming, especially in the beginning, Baker said. “When I took over the county, all of the issues … I was basically building a government from scratch, and it was not easy.” He sometimes had to work until 3 a.m. He was gaining weight.

Finally, his predecessor, Wayne Curry, gave him some advice. “He said you’ve got to do something else. He pushed him to do the things he loved — reading, running and tennis — to relieve the stress. He started running in the mornings three days a week with county police cadets. He started carrying a book to read.

It still can be overwhelming at times, especially in a job as demanding as his. “You need something to relieve the stress and you need others to help, or you will get sick yourself, and then you can’t care for your loved one,” he said.

His biggest lesson: “Seek and accept help. Don’t try to do it yourself. You need support. Don’t be embarrassed to accept help.”

Another lesson: “Be open and honest with your family, especially your children. I tried to shelter my daughter. Looking back, it was wrong.”

The last thing: “Accept the fact that every day is the new normal.” That means when his son, Rushern IV, was getting married, he needed to get his wife there in her wheelchair and then figure out how long they would need to be outside during the ceremony and proceedings.

“You start to put things into perspective,” he said. “I had to pick up from one of the most devastating things in my life and move on.”