CLEVELAND — NBA All-Star Weekend in Cleveland will present all of its usual festive events and celebrate many of the top players throughout the league’s 75 seasons.

The weekend will mean even more for the National Basketball Social Justice Coalition as it recognizes a seminal moment in activism history led by athletes from various sports who wanted to get involved.

And this week, the coalition will honor the significance of the 55th anniversary of the Cleveland Summit with a marker at the location of the historic event.

“[As a member of the coalition] we feel the weight of that legacy, and it’s something we have to honor and live up to,” said Cadogan. “So whenever people go to that site and see that history and the importance of those giants, not just in sports, but also social justice, it will be right there for them to appreciate and to remember.”

Honoring the moment is not only about recognizing the athletes who stood for social change, but a reminder that anyone can contribute to the cause — and an unfamiliar face in the iconic photo of the “Ali Summit” is a prime example.

Cleveland native Lorenzo Ashley has rarely been identified among the legends who participated in the summit.

“I was trying to hide because I’m with all of these great people,” said Ashley, who lives in Los Angeles. “They’ve done great things and I hadn’t done anything like them.”

Modesty aside, Ashley’s participation helped make a statement of solidarity that was paramount in the watershed moment to social justice and the protest of the Vietnam War.

The event occurred at 105-15 Euclid Ave. on June 4, 1967, in the offices of the Negro Industrial and Economic Union, later renamed the Black Economic Union (BEU), co-developed by NFL legend Jim Brown, who had recently retired from football to pursue an acting career. The BEU supported education, economic development and other social issues in the Black community.

Two months before, heavyweight champion Muhammad Ali had refused induction into the armed forces based on his religious beliefs as a conscientious objector. He was stripped of his title and his boxing license was suspended. He faced up to five years in prison.

So Brown, who wanted to help his friend, asked former Cleveland Browns teammate John Wooten to make phone calls to several current and former players about a meeting in Cleveland to talk with the champ.

Depending on the angle, Ashley is in the rear of the photo. He was a recent graduate of Indiana University. After a short stint in the Canadian Football League as an offensive lineman, which ended because of a knee injury, he attempted a tryout with the Browns, but Brown convinced him to reconsider.

“I’d known Jim since I was in high school because my brother owned a pool hall, and Jim was often there,” said Ashley, now 81. “He was my idol. When I hurt my knee in the CFL and then was trying out for the Browns, he asked me to work for [the BEU] so I wouldn’t become a football bum.”

Ashley became the organization’s national director of personnel. He also led a youth center and a group that retrained ex-convicts who returned to society.

Ashley never played sports on the same level as the other summit participants, but he contributed as much off the field.

“Lorenzo was an active member in the community and in our organization and I had as much respect for him as I did Bill Russell,” Beach said. “It’s very important to the struggle that we all bring something to the table. I don’t suffer any more in white racism and white supremacy than you do. We all suffer, so we all have a role.”

The meeting with Ali defined the group’s role. He was clear about his convictions. Joining the armed forces would have meant members of the BEU could continue receiving a financial windfall through Ali’s promotional company Main Bout as employees from closed-circuit TV revenues. Ali convinced the group otherwise. Members of the summit held a news conference and declared their support of Ali’s rights as a conscientious objector.

“Ali was so convincing in that room as he presented his beliefs and what it meant to be Black,” Ashley said. “By the time he was done, I damn near wanted to be a Muslim. And I was raised Baptist.” 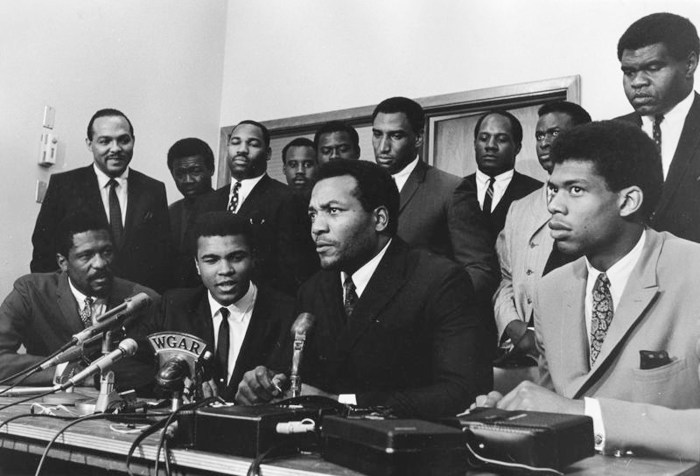 Walter Beach, who was at ’67 Cleveland Summit, says he was ‘never contaminated’ by white supremacyRead now

Ali would eventually win his appeal and return to boxing, but that moment of solidarity is only one example on a continuum of activism.

“The moments matter, but stringing them together is where we see impact,” Cadogan said. “It’s people coming together and saying, ‘OK, we’re not just in this for today, we’re in this for the long haul,’ because our social problems require energy, and we’re going to come back again and again and again, and push forward and make progress.”

The Ali Summit defined a new moment in activism by athletes, and Ashley is honored by the NBA’s recognition.

“The same things we were fighting for back in the ’60s are the same things we’re fighting for today,” said Ashley, who left the BEU in the early 1970s and worked with a company that produced Grambling State football highlights. “And it bothers me, but for organizations like the NBA to throw support behind movements to bring about social justice and equality means so much.”