North Carolina Central men’s basketball coach LeVelle Moton grew up in the Roxbury neighborhood of Boston, yet he pledged his football allegiance to the Pittsburgh Steelers at an early age. Years later, his Steelers fandom would aid him in building a strong bond with one of the franchise’s winningest coaches, Mike Tomlin.

In 2010, Moton, fresh off his first season in charge of the Eagles, wore a Steelers hoodie to a basketball tournament in Orlando, Florida, catching the eye of Hall of Famer and Kentucky head basketball coach John Calipari. Calipari, a Pennsylvania native raised in a suburb outside of Pittsburgh, is a regular at Steelers training camp. After discussing the Steelers’ season outlook with Moton, Calipari suggested the North Carolina Central coach should meet Tomlin and passed Moton’s number along.

A call described as a “real recognize real” conversation commenced a mentorship that extended far beyond them both being Black coaches and would transcend the fundamental differences between football and basketball.

“The one coach that’s opened the door and mentored me more than anybody hasn’t been a basketball coach, it’s Mike Tomlin,” Moton told The Undefeated. “From the first time we talked, we just instantly clicked. We had so much in common. We come from humble beginnings; our moms worked extremely hard to provide for us. We bust our butts to get where we are [and] no one really believed in us. So, you had to kick some doors down and prove yourself.”

Moton admired Tomlin before the two ever met. Moton saw their careers as young Black coaches run a parallel course as he navigated being an assistant with limited head-coaching experience at his alma mater North Carolina Central and guiding the program’s transition to Division I.

“The reason I got hired at North Carolina Central is because of Mike Tomlin. When I was hired, I was the youngest coach in the country. It wasn’t popular to hire a 34-year-old guy with minimum experience,” Moton said. “Mike proved everyone wrong because he won the Super Bowl at that exact time that I was going through my interview process.

“So it made it kind of trendier that year, made it more fashionable and sexy for people to believe in young Black coaches. The reason [NCCU] believed in me as a Black coach is because [Tomlin] set the standard across the globe.”

Before the coronavirus pandemic, Moton described the Steelers’ training camps as a place often filled with Black coaches from all walks of life and various sports. Tomlin and the Steelers coaching staff invited guest coaches to sit in on players and coaches’ meetings and provided a sideline view of practice. Numerous coaches bounced ideas off one another, sharing lessons that would be applicable in their respective sport, which Tomlin said helped him become a better football coach.

“That’s how we get better. We show up, sharpen our swords, iron on iron. We share information, time and space. That’s what it’s about,” Tomlin said. “It’s about improving the vocation of coaching [and] us individually getting better and helping one another, and just putting ourselves in a position to help players more. Although we’re involved in different sports, we share that same spirit and we’re able to exchange information to help one another.

“From a football perspective, I’ve learned so much from basketball guys because of their numbers. Their numbers are small and the intimacies of their relationships, the fluidity of their scheduling and so forth, are some things that helped me get better. It makes me less rigid, and I think that’s important as well.”

Moton’s relationship with Tomlin evolved to asking the Steelers head coach for advice on career opportunities, and when work and family balance became blurred, Tomlin was there to share things he learned from his own experience.

“The first thing he told me: ‘It ain’t no balance. There is no 50-50. It is quality over quantity.’ So that put everything into perspective for me,” Moton said. “I instantly went into quality over quantity mode, even though I couldn’t spend as much time with my wife and kids that I wanted to, the quality of the time that I spent was going to be incomparable to anything else.”

Tomlin, the longest-tenured Black coach in the NFL, has a head-coaching résumé that doesn’t include a single losing season. Tomlin has excelled in a league often criticized for its treatment of Black coaches. He is currently the lone Black head coach in the NFL as the playoffs begin. Coaches Brian Flores (Miami Dolphins) and David Culley (Houston Texans) were fired after the end of the regular season. 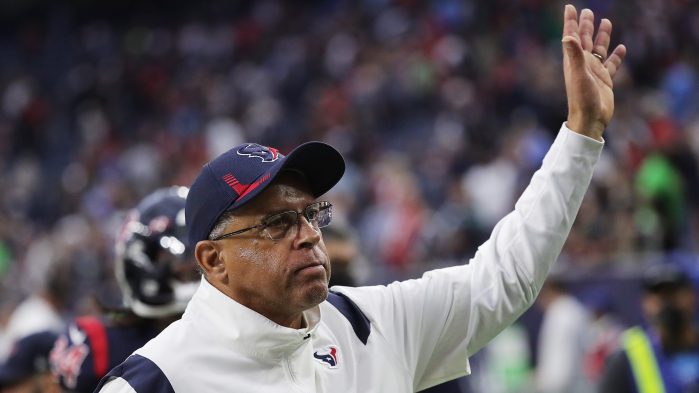 In 2001, Tony Dungy, then the Tampa Bay Buccaneers head coach, hired Tomlin to his first NFL position as a defensive backs coach. After Dungy was fired the following season, the two maintained a relationship over the years.

“What I love about Mike is he’s going to coach his style, no matter what outsiders say. He says the standard is the standard and he lives up to that,” Dungy said of what sets Tomlin apart. “I think that’s the lesson that you learn as you go through this business. You can flow with the tide, but at the end of the day, if you’re not successful, it’s gonna come back on you. So you really need to do what you believe. That’s what I try to pass on to these young guys: Don’t ever leave your roots.”

Besides Tomlin, Dungy’s coaching tree includes Lovie Smith, Jim Caldwell, Herm Edwards and Leslie Frazier. Dungy made it his mission to offer support for young Black coaches throughout his career.

“It’s not always that way for African American coaches [to have someone] who can really tell you what you need to know and what’s important. Sometimes that’s hard to find,” Dungy said. “When you talk about African American coaches, you want to ask somebody who’s been in it: ‘What’s going on [or] what do I need to look out for?’ There aren’t that many people you can reach out to. You got Mike, so it’s not as big of a network for us. I think it’s important that these younger coaches, when they get on the cusp, or when they first get into it, that they’re able to have someone that they can communicate with and reach out.”

The brotherhood of coaches also serves as a safe space to air grievances when one of them is passed over for opportunities or to dissect subtle terminology such as “he’s a players’ coach” or “he doesn’t make or call his own play” to undermine Black coaches. Their support for one another was on display when Tomlin secured a playoff berth and his 15th consecutive season without a losing record. Moton congratulated him publicly. Whether good or bad, Moton jumps at the chance to praise Tomlin for his success, not because Tomlin asked him to, but because he understands Black coaches don’t always receive the necessary credit they deserve.

Dungy is proud of the impact the network is making in the lives of Black players and coaches and has faith a new wave of African Americans will land head-coaching positions in the NFL.

“It’s even more than sports, but to reach out to other people and talk about life, because at the end of the day, that’s what this is all about,” Dungy said. “They’re very successful, and they’re turning out good football programs, but players that play for them are growing as people. I think that is the most important thing. That’s what I’m really proud of with our group.

“It’s cyclical. Those guys out there are doing a good job of developing them. Do they get a chance? Do they get those opportunities? That’s what the ebb and flow is, but those opportunities will come. You can’t give up, get discouraged, and you can’t think that’s never going to happen. Sometimes it takes a while, but we have too many young, talented African American coaches for it not to happen.”

Under Tomlin’s tutelage, Moton has increased his own status. He’s applying the lessons he has learned from his network of Black coaches to make his mark in the Mid-Eastern Athletic Conference (MEAC). In 2019, he served as an assistant coach on the USA men’s U19 FIBA World Cup team, and in 2021 the NCCU Eagles were featured in the inaugural season of Why Not Us on ESPN+. At NCCU’s McDougald-McLendon Arena, a banner honoring his accomplishments as a player hangs in the rafters alongside the late NCCU and NBA legend, Hall of Famer Sam Jones.

Moton led the Eagles to three consecutive MEAC tournament championships and NCAA tournament appearances from 2017 to 2019. This season, the Eagles are 6-9 and awaiting MEAC play after COVID-19 protocols postponed their first two in-conference games.

The accolades Moton has received don’t compare with the relationships he’s built with his players and other coaches. In his 13 seasons leading the Eagles, Moton has built close relationships with state rivals Mike Krzyzewski of Duke and former North Carolina head coach Roy Williams. He’s also used social media to connect with coaches and hold clinics via Zoom to pour into a new generation of coaches and build relationships with them.

“I think relationships are more valuable than money. In our community, we’re not taught the value of the relationship. We’re not taught the value of how to sustain the relationship, but what I’ve learned is that 99.9% of the opportunities that’s created in this life that God gives you, is through the vessel of another person,” Moton said. “I’m still building those relationships and participating in those relationships. I’ve always ended every call asking people how I can help or is there anything that I can do. I’ve learned that you reap what you sow, what you put out in this world, the energy that you put out in this universe, that comes back to you tenfold.”

Besides coaches’ clinics, Moton wants to follow in Dungy’s footsteps by establishing his own coaching tree with his program. Moton’s motto is the team’s success must benefit everyone involved, and he hopes to see his assistants move into head-coaching roles.

“A lot of times we get the information, and we try to hold on to it. We want nobody else to have it. Let’s just share the information. That’s your social responsibility,” Moton said. “That’s one of the things that’s big to me, I want to give people opportunities to go on and propel in their respective careers, earn more money and have head coach opportunities. So I wanted to develop and establish a coaching tree, that’s big to me, because it [isn’t] about me just winning championships and you’re still sitting in this office. So now we have to prepare the ones directly under for those next opportunities in life as well.”

Although still learning himself, Moton is continuing the heritage of Black coaches uplifting and building as they climb. Tomlin appreciates watching Moton’s growth and willingness to pass the torch.

“That’s the agenda. I’ve been mentored and helped in my growth and development by a lot of quality, influential men in the coaching profession like Tony Dungy, the late, great John Thompson and John Chaney,” Tomlin said. “I’m paying it forward in terms of my relationship with [Moton]. It’s really cool, and I really appreciate the perspective of watching him do the same. That’s the spirit in which I do it.”