Lamar Jackson is a young Black man who knows his value

In the final year of his contract, the Ravens quarterback is performing like an MVP while betting on himself, a wager that depends on more than just his talent

He’s playing his butt off, for one. Secondly, he’s taking on the Baltimore Ravens in contract negotiations and — finally — the 25-year-old quarterback is representing himself.

Jackson is arguably the NFL’s most exciting player. Last month, he ended contract extension negotiations as promised — after he and the Ravens could not agree on a new deal. Jackson told the Ravens he would play the rest of the season, let his performance speak for itself and resume negotiations when the season ends. The speculation is that Jackson wants the sort of contract that the Cleveland Browns gave Deshaun Watson — $242 million fully guaranteed.

Each side is dug in — the Ravens on fiscal prudence and not setting precedent, Jackson on demanding the franchise recognize his generational talents and pay him in a generational way. Each week, Jackson makes a compelling argument. He reminds the Ravens of his importance, not just to the organization but to the league.

On Sunday, with Baltimore trailing Cincinnati by a point with less than two minutes left to play, Jackson led the Ravens on a seven-play, 50-yard drive that set up a game-winning field goal. On that drive, Jackson ran four times for 30 yards. Each run — five yards, 19 yards, four yards, then three — was designed to set up place-kicker Justin Tucker’s 43-yard field goal that lifted Baltimore into first place in the AFC North and past Cincinnati 19-17.

But this isn’t about play-by-play and X’s and O’s. It’s about a young man, a young Black man, who knows his value.

Each Lamar Jackson performance over the next 12 weeks is part of a much larger game he’s playing and part of a larger wager. Jackson is betting on himself.

Jackson’s decision to represent himself makes him a relatively rare bird in the NFL. A few NFL players represent themselves: Laremy Tunsil of the Houston Texans, DeAndre Hopkins of the Arizona Cardinals, Bobby Wagner of the Los Angeles Rams. Retired players such as Richard Sherman and Russell Okung represented themselves. Jackson is the only starting NFL quarterback to have taken this leap and he’s doing something that no quarterback has done: Playing his heart out while negotiating directly with the general manager for a better contract.

After Sunday’s game, Ravens coach John Harbaugh gushed when asked about how Jackson used his unique running skills to get the team into field goal position.

“There’s nobody like him,” Harbaugh said. “You can’t take anything away from the great quarterbacks in this league; he’s in that group. I’ll take him over everybody. He’s ours. He’s the Ravens quarterback. Our players love him, our organization loves him. Everybody loves him.”

Does the organization love Jackson enough to pay him the guaranteed contract he wants?

The Ravens are known as one of the most well-run NFL franchises, but this is one of the NFL’s nuttier situations.

In March at the NFL’s owners meeting, Ravens owner Steve Bisciotti told reporters that he had issues with the Watson contract. His message was that the Ravens would not repeat the Cleveland folly.

“I don’t know that he should’ve been the first guy to get a fully guaranteed contract,” Bisciotti said, referring to Watson. “To me, that’s something that is groundbreaking, and it’ll make negotiations harder with others. But it doesn’t necessarily mean that we have to play that game.”

Jackson and the Ravens are playing a fascinating game within a game which, in an odd way, puts the team and its franchise player at cross-purposes.

Jackson wants to prove that he is worth the gazillion-dollar guaranteed contract he’s asking for. The Ravens’ position is hazier; the organization is hedging its bets.

The team obviously wants Jackson to lead Baltimore to a title. Yet in refusing to give its franchise player the massive contract he wants, the Ravens effectively are telling him they don’t think he’s worth it. As Jackson is betting on himself, the organization has puts itself in the position of betting against Jackson. The Ravens are betting that he’ll underperform in the postseason or, worse yet, get injured, as he did last season, proving the team’s apparent contention that Jackson is a poor long-term risk because of his robust, multifaceted style of play.

The only way Jackson wins big is if he leads Ravens deep into the playoffs, preferably to the Super Bowl championship or to the title game at the very least. That means running the gantlet of Buffalo’s Josh Allen, Kansas City’s Patrick Mahomes, Cincinnati’s Joe Burrow and heaven knows who in the Super Bowl.

The analytically prudent thing to do is compare Jackson to his young quarterbacks’ contemporaries: Mahomes, Allen, Kyler Murray of the Arizona Cardinals, Watson and Burrow.

But Jackson’s value should not depend on analytics or comparisons. Jackson is as valuable to Baltimore as Allen is to Buffalo or Mahomes is to Kansas City or Watson must be to Cleveland.

As Harbaugh said Sunday: “He’s ours.”

Last week, I spoke with legendary agent/attorney Leigh Steinberg about Jackson. Specifically, I wondered what he thought about Jackson negotiating without an agent and what he thought about the impasse over contract negotiations. During his 41-year career as an agent, Steinberg has represented more than 300 athletes, including the No. 1 pick in the NFL draft eight times. He currently represents Mahomes.

Is an agent necessary? Steinberg said the agent “shields the player from any antagonism or criticism of either their performance or anything else.” He told the story of his first client, quarterback Steve Bartkowski. He asked Bartowski if he wanted to know everything the general manager was saying about him or did he want the sanitized version. Bartkowski said he wanted to hear everything.

Steinberg told his client that the team said Bartowski was only the first pick in the draft because the draft was weak. They said he didn’t have much mobility and the team was worried he might get hurt.

“And, so, I came back and told him that and he said, ‘Screw ’em, get me traded,’ ” Steinberg recalled. “The point is that they were things he probably didn’t need to hear, but they’re just part of the give-and-take.” 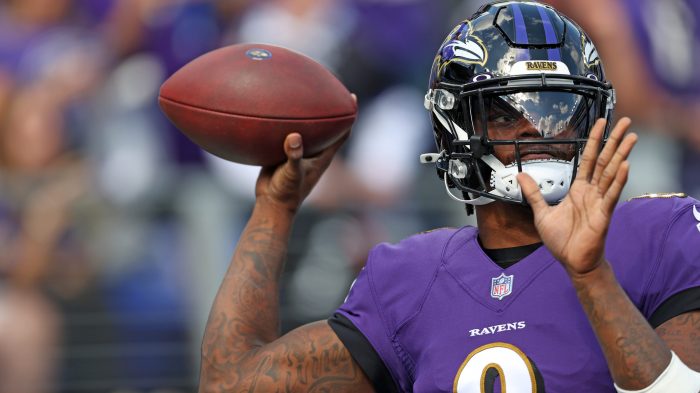 I’m not sure what was said between the Ravens and Jackson. From a business perspective, the Ravens may be wondering how long Jackson’s body will hold up. Will he be the same dynamic player in two years that he is now?

Jackson is thinking of the long game as well, which is why he wants long-term security and a generational guarantee.

“I think he’s already proved himself worthy of the standard of a franchise quarterback,” Steinberg said of Jackson. “I guess the question is, what does he have left to prove. I mean, he’s already been MVP. And so, probably the only higher achievement would be winning the Super Bowl.”

The problem with Jackson betting on himself in a team sport is that so many moving parts are involved in making a successful bet: a lineman misses a block, a wide receiver runs the wrong route or drops the ball, a running back fumbles.

“The problem is that one player doesn’t control that,” Steinberg said. “It’s a team effort. And he’s not playing croquet or chess. This is a traffic accident on every play, and even though he’s elusive and has amazing escapability, a player can be injured on every play.”

“I think he’s [Jackson] already proved himself worthy of the standard of a franchise quarterback. I guess the question is, what does he have left to prove? I mean, he’s already been MVP. And so, probably the only higher achievement would be winning the Super Bowl.”

Two years ago, Kansas City reached the Super Bowl but Mahomes lost two starting tackles. He spent most of the game running for his life on the way to a loss. “The point is, if that’s what this season is — to bet on himself — it’s not within his power to completely control the outcome,” Steinberg said.

Steinberg believes that the most important measure of a quarterback’s greatness is defined by the ability to take a team to and through the playoffs and to win a title. Mahomes has won one Super Bowl and played in a second. Burrow led Cincinnati to the Super Bowl last year.

Going into this season, Baltimore was 37-12 in the regular season with Jackson and has been to the playoffs in three of those four years. Jackson is 1-3 in the postseason.

Whatever the Ravens wind up paying Jackson, it will not be enough, because his value goes beyond numbers, because there are things in life that money cannot buy.