L.A. confidential: Paul George is not from where you think

Paul George probably won’t take the time to explain where he is truly from if you are not from California. The Oklahoma City Thunder swingman will just say he’s from Los Angeles to make it easier.

George often gets mistaken for being from L.A., but his hometown is actually about an hour’s drive away in Palmdale, a city in northern Los Angeles County.

Paul Clifton Anthony George was born in Palmdale, California, on May 2, 1990. His parents, Paul and Pauletta George, were part of a long migration of African-American families to Antelope Valley with hopes of cheaper housing and a safer and less crowded way of life than in South Central Los Angeles, where the Georges met and got married.

“We’re a place where people have come to find quality of life,” Palmdale Mayor Jim Ledford said. “A small-town kind of feel even though we have 170,000 people. The values are very family-centric. Probably one of the most diverse cities in L.A. County.”

George, the five-time NBA All-Star, grew up on the east side of Palmdale, which he said was predominantly black and Hispanic. There were some neighborhood challenges here too. Cheaper housing didn’t always equal more employment opportunities, as Palmdale’s median income was $53,922 and 21.2 percent of the population lived below the poverty line, according to the U.S. Census Bureau in 2016.

George’s father worked blue-collar jobs for a rim company and as a carpenter, and his mother was a homemaker. For Paul George, there wasn’t much for him and his two older sisters (Portala, who played volleyball at Cal State-San Bernardino, and Teiosha, who played basketball at Pepperdine University and professionally in Germany) to do growing up in the “aerospace capital of the world.”

There was Antelope Valley Mall as a hangout spot, the movies, bowling alleys and small entertainment attractions. This wasn’t Los Angeles, and George did not visit there much as a kid.

“I was home,” said George. “That was what I was used to. There were no big lights. There were no main attractions. You would go to the state fair or the little city fairs that come in town. That was our amusement park, that was our theme park, the little carnivals. We would go to the bowling alley. We’d be at the park all night. I was not introduced to any mainstream stuff.”

George, 28, said he did not get caught up in any trouble of note during his youth. Perhaps he was aided by growing up around a support system of about 70 family members. He and his father often spent time together fishing.

“Calling Paul a late bloomer would be an accurate description.”

Growing up a big fan of Kobe Bryant and the Los Angeles Lakers, and rooting for the Los Angeles Clippers in large part because their underdog label fit his Palmdale circumstances, George also used his free time to play basketball.

“He’d keep the gym open for me pretty much anytime,” George said. “And me and my boy that I grew up with, we would play one-on-one, man. We’d play one-on-one full court. We’d go back and forth, play three or four games. But we didn’t want to do nothing else. I mean, we just wanted to hoop.”

While George is one of the NBA’s elite scorers now, Hegre had to prod him to shoot early in his basketball career.

“Calling Paul a late bloomer would be an accurate description,” Hegre said. “He was tall and skinny, but he put in his work in the weight room here. … His freshman year he wasn’t really very aggressive. I used to have to sit behind the bench at freshman games and I prompted him to be more aggressive, take open shots and drive it. He was always very respectful, ‘Yes sir.’

“He would make another pass and come out again. I would say, ‘Paul, would you please shoot the ball?’ Then finally, one day between games, I said, ‘You’re going to run 20 suicides, but I will take one off for every point you score tomorrow.’ He kind of got the idea if he didn’t start scoring, he would start running.”

Hegre said the summer before George’s senior year was when he started getting on the radar from college recruiters while playing for the Los Angeles-based Pump-N-Run AAU team. Current New Orleans Pelicans guard Jrue Holiday was the star of that team.

George averaged 23.3 points and 11.2 rebounds during the 2007-08 season for Knight High, leading the team to a 23-9 record. He was named the 2008 Golden League Most Valuable Player and selected to the 2008 Los Angeles Daily News All-Area boys’ basketball team.

“I vividly remember playing against Paul George,” said Atlanta Hawks center Dewayne Dedmon, who went to a neighboring high school, Lancaster High. “He dunked on one of my teammates, so you can never forget that. We all knew he was the one who was about to get out.”

“I saw that boy go back and forth with people who at that time had bigger names,” Jackson said. “Being from that area, sometimes you fly under the radar. For a while he was a diamond in the rough. He would go show out and people would say, ‘Who is this?’ I saw him as a baby ‘T-Mac’ [Tracy McGrady].”

Although George was a high school phenom in Palmdale, he did not appear in the McDonald’s All American games, Jordan Brand Classic or Hoop Summit. He was a three-star recruit ranked as the 20th-best prospect in California, not the nation, in 2008, and signed with a mid-major in Fresno State.

George starred for two seasons at Fresno State but did not get the national spotlight, as the Bulldogs had a losing record each season. NBA scouts, however, saw potential in the 6-foot-9, 220-pound forward with his skills, height, length, athleticism and shooting skills. The Indiana Pacers selected George with the 10th overall pick in the 2010 NBA draft.

George didn’t disappoint from the start in the NBA. He was a 2011 second-team All-Rookie selection. He made four of his five All-Star appearances with the Pacers and overcame a broken leg suffered during an exhibition game with USA Basketball in 2015.

But George soon began eyeing a fresh start in Southern California, going back to his home state to play for the Lakers via trade or as a free agent in 2018.

The Lakers could have traded the No. 2 pick in the 2017 NBA draft or forward Brandon Ingram for George before that draft, a source said. But after the Lakers stayed pat in hopes of signing George as a free agent in 2018, the Thunder traded for George on July 6, 2017. There was heavy speculation that since George is from the Los Angeles area and owns a home outside of Los Angeles in Calabasas he would ultimately sign with the Lakers as a free agent this past summer. George told The Undefeated that he actually planned on signing with the Lakers if he had not been traded to Oklahoma City.

George, however, fell in love with playing with fellow All-Star Russell Westbrook in Oklahoma City despite losing in the first round of the playoffs last season. George agreed to sign a four-year, $137 million contract at the start of free agency and never met with the Lakers.

Jackson, who lives in Los Angeles, was surprised George did not go to the Lakers.

“I was really surprised he went back to Oklahoma City,” 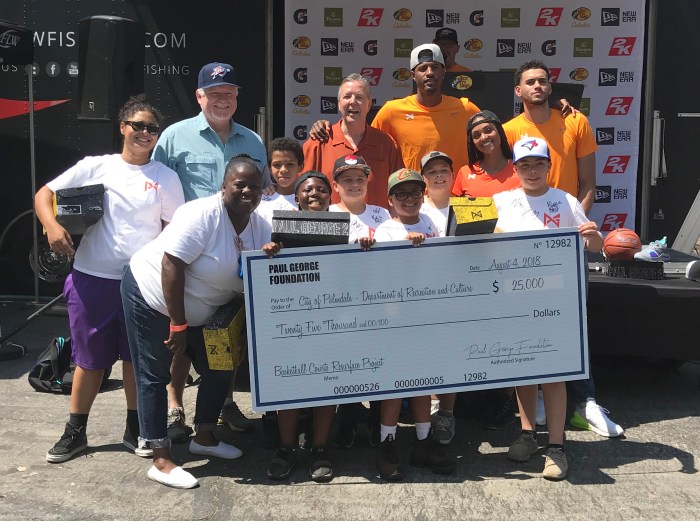 Added Ledford, a Lakers fan, with a laugh: “I’m a little disappointed. I wanted to see him closer to town. But I understand.”

The Thunder showed their love and appreciation for George by attending the Paul George Celebrity Fishing Tournament in Castaic, California, about 50 miles southwest of Palmdale, on Aug. 4. Westbrook, Thunder teammate Andre Roberson, head coach Billy Donovan and general manager Sam Presti all participated in the tournament. The winner was Thunder newcomer Abdel Nader, who fished for the first time and earned the biggest catch of the day, which was 4 pounds, 12 ounces.

“They had a tightness and a bond going on that was special,” Ledford said of George and the Thunder.

George hopes that his rise from obscurity to the NBA can inspire the youth of Palmdale to achieve greatness with hard work.

“I think about this all the time. Why me?” George said. “It’s just crazy how everything has manifested and everything I’ve been blessed with, because there is nothing there. And for you to even dream is a joke in Palmdale.

“But if I can tell them anything, it’s look at me from afar. Watch what I’ve done. It didn’t come from a dream. It came from me actually putting one foot in front of the other, just working.”

George raised $25,000 for the Palmdale Department of Recreation and Culture to help resurface basketball courts at his second annual charity fishing tournament. Those funds are expected to be used to refurbish George’s childhood park, Domenic Massari Park, as well as two other parks.

Ledford said a street or building named after George could be coming in the future in Palmdale. There is also talk about a “Paul George Day” in Palmdale.

“Hey, all good things to its conclusion,” Ledford said. “Paul George certainly has a legacy here, and right now we are joining the ride.”

George says he visits Palmdale about three times during the offseason primarily to visit family but plans to do much more there in recreation and education. He wants to help clean up parks and gyms and create after-school programs.

“I see lost hope. Honestly, there’s nothing there for kids,” George said. “I see people I grew up and went to school with now and it’s like, ‘Damn, I know we’re 28, but my 28 looks different than your 28.’ And it’s not even because it’s status, it’s like people just give up. They just get into this habit and they don’t want nothing more for themselves, so I want to change that.

“Palmdale’s home for me, that’s where my heart is always, so it’s about that time for me to step up and be the face of that.”