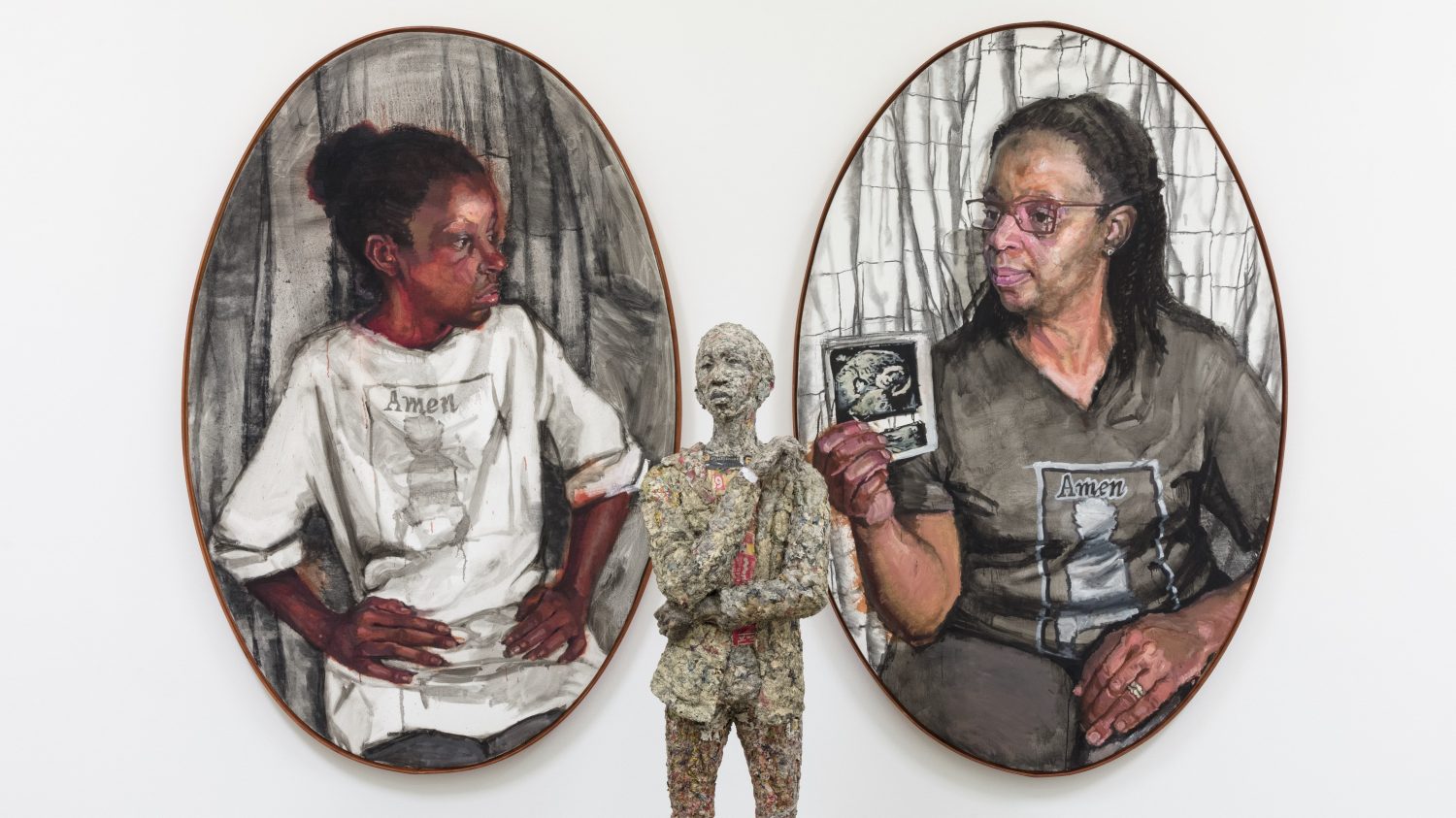 Artists offer a counterbalance to mainstream conceptions of family

Kinship, a new exhibit at the National Portrait Gallery in Washington, explores the complexities of how people connect. And much like the notion of kinship itself, familial or fictive or forged, what we find are multilayered stories of togetherness.

The exhibit is the latest in a series looking at new conceptions of portraiture. Curators brought together the work of eight artists working on iterations of family in painting, photo, sculpture, video and performance.

Those explorations raised issues of inequities and environmental degradation in Black communities and violence against Indigenous people. They offered counterbalances to mainstream conceptions of family. They anchored themselves in the ways we choose family, “not just the legal and blood relations established by law,” said Leslie Ureña, curator of photographs. 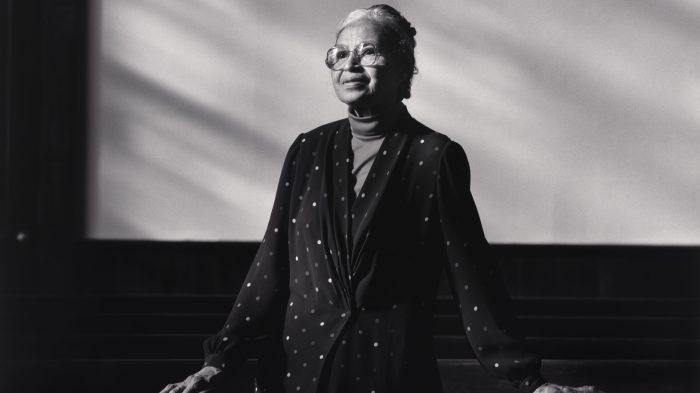 ‘I Dream A World’ celebrates the timeless, urgent vision of Black WomenRead now

The artists explored how relationships become undone and re-formed, and affinities for strangers who reminded them of themselves, Ureña said. They were looking beyond death, for ways to “keep in touch, more or less, with people who have passed.”

Sedrick Huckaby’s work in painting, sculpture and installation, blurring lines between each, explores faith, family, community and heritage. It is attention and memory layered with the vicissitudes of Black life, and it contemplates the ways people still live with us when they are no longer alive. Sculptural pieces using found objects and bits of papier-mache made out of newspaper bring both legacy and the current moment into the space.

In the South, when people die, people will make a T-shirt with the gone person’s picture to wear to the wake and sometimes the funeral, Huckaby siad. In his self-portrait in a mirror, Gone but Not Forgotten: Sha Sha, Huckaby wears the memorial T-shirt of his sister, who died young, Huckaby said. In the work, he is pulling his overshirt open to show the image of his sister, which sits close to his heart, and the bend of the mirror disappears the “G” in “gone,” so the T-shirt reads as if they are “one.”

“It’s this story about the relationship between us,” Huckaby said. “I’m wearing this T-shirt. I’m carrying her with me.” It’s a way of giving those who’ve left this life a new plane of corporality.

Jessica Todd Harper photographs her sister lying down with their grandfather toward the end of his life, symbolizing the warmth of their living tie. “But the window is also a metaphor for the journey ahead, for the next world he is close to,” Harper said at the exhibition preview. In another photo, Harper holds her infant inside the closed walls of a small bathroom. Light streaming through the window behind her is the world that soon will call her baby to walk in it.

Njideka Akunyili Crosby, who immigrated to the U.S. from Nigeria as a teenager, turned feelings of kinship into sketches, photographic transfers, charcoal and collage, abutting and layered, like her memories. There are images of little girls, as she had once been, dressed up and confident in their holiday clothes. There’s a portrait of an older brother whose pose and outfit evoke the influences of American pop music and the Nigerian military. A portrait of Thelma Golden, director and chief curator of The Studio Museum in Harlem in New York City, in acrylic, transfers and colored pencil, celebrates the community Crosby found there as an artist in residence.

The series Flint is Family in Three Acts by LaToya Ruby Frazier, whose work documents social justice and cultural change, was initially supposed to be a five-month assignment covering the water crisis in Flint, Michigan. It turned into a five-year collaboration with the family she photographed. Her work compels us to understand how the people behind the industries that gave rise to the American century bear the hazards they bequeathed. 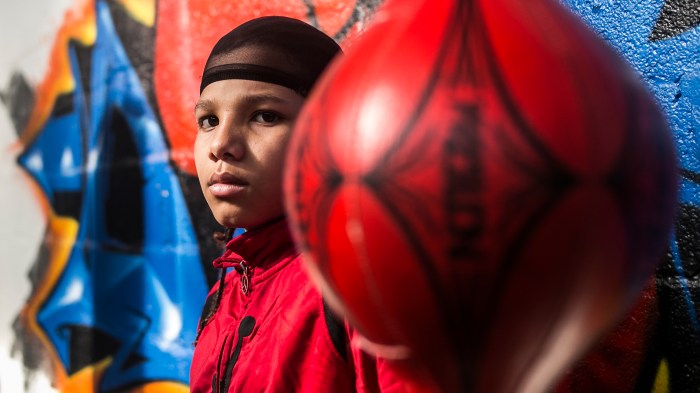 Frazier photographed school bus driver and poet Shea Cobb pouring bottled water like a waterfall into her 8-year-old daughter Zion’s mouth so she could brush her teeth. In capturing the lowlight image, Frazier said, “I freeze it just before the water drop hits her tongue to point out to you as the viewer that in the midst of a crisis, she is choosing the lesser of evils here, which is plastic water bottles which is contaminated with plastic cause they sit on pallets in the heat all day before they’re distributed to residents.”

“The beauty of this is as a mother, she’s telling her jokes and singing songs because she’s concerned about her daughter’s relationship with water,” she said.

Self-Portrait with Shea and Her Daughter, Zion, in the Bedroom Mirror is set in Mississippi, where Cobb’s father has 90 acres of land along with their own freshwater spring, part of an inheritance of resilience. Cobb looks into the mirror with family photos arrayed around her, and her image is visible in the mirror Zion is looking into, as is the image of Frazier herself. “I’m careful about the legacy of Black women and how we’ve been behind each other generation after generation, regardless of how this country continues to put these types of pitfalls in our way,” Frazier said.

Frazier said she viewed Zion “as a double portrait because I was 8 years old when our water was contaminated in Braddock, Pennsylvania. So I’m also a survivor of these types of systemic and structural environmental justice issues.” 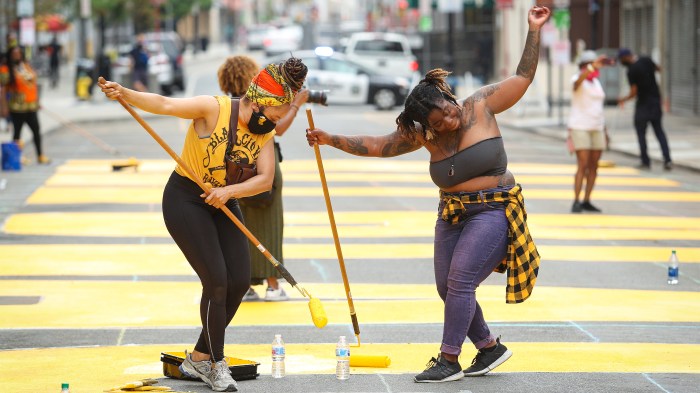 For Arturo Holmes, photography fulfilled what pre-law could notRead now

“I knew what it was like to be 8 years old and living in a postindustrial economy, a postindustrial landscape of nothing but contamination, and racism in the health care system. And knowing I couldn’t do anything for myself when I was 8. But here I can stand up for this young girl and her mother today and advocate through the photographs, through the telling of the story. But most of all, I created this family album for Zion,” said Frazier.

As an affirmation of kinship.

“Kinship” will be on view at the National Portrait Gallery, Eighth and G streets NW, Washington, D.C., through Jan. 7, 2024.