Bolden’s rise from youth standout to the NHL came with challenges, but empowered her to push for inclusivity in the game

Blake Bolden often noticed the glares and chatter directed at her when she arrived at visiting ice rinks as a youth hockey player.

A white stepfather and Black mother entering those facilities with a 10-year-old Black girl wearing colorful barrettes at the end of her braids was easily noticeable in a sport that lacked diversity on or off the ice.

“I could hear the parents, ‘Who is this girl? What’s going on here?’ And yelling to their kid from the stands to go mess me up,” Bolden said. “I don’t know if those responses were because I was Black or a girl.”

But as Bolden’s hockey skills progressed, many of her detractors changed their tune.

“Because I played on the same team for a few years, people started to become familiar with me,” Bolden said. “I began to get enough confidence so when I’d walk into the rinks and the locker rooms, I was like, ‘What’s up? I’m here!’ ”

All of these accomplishments were made by what began as an elementary school-age girl simply wanting to try a sport her stepfather, Leslie Dean, had a passion for. Dean worked security for Cleveland’s International Hockey League team. Time at the arena watching hockey together became special for Bolden.

“I realized when I wanted to try hockey, it made my stepdad excited and proud,” Bolden said. “And it meant we could spend even more time together and that was enough for me.”

Dean, a retired police officer, was encouraged by Bolden’s desire to play even though she didn’t know how to ice skate, and he wasn’t initially aware of any youth leagues — especially any all-girl leagues. So he bought her some used hockey equipment and tutored her for a few weeks on a neighborhood rink before signing her up in a suburban youth league.

“And that’s where it started,” Dean said.

In three years, Bolden developed from a kid who couldn’t skate to a girl good enough to play for the Cleveland Barons, an elite youth hockey team. She was only the second girl to play on this team.

“I remember my stepdad being supernervous when I tried out for the Barons,” Bolden said. “He literally had an upset stomach. He really wanted me to make it so I wouldn’t be disappointed.”

Despite the rise in the level of competition, with bigger and stronger boys, Dean said, he was not concerned. He was confident Bolden could defend herself.

“I was called the N-word during a match while in front of the net trying to protect our goalie from someone scoring on us. My teammates heard it and they got on this guy like stink on poo. I earned their respect. I felt protected.”

“Players on that level are well-conditioned and Blake was solid as a rock,” Dean said. “There was a time where she hit a kid so hard that she gave him a concussion. Knocked him right out.”

Bolden developed into such a ferocious defender that her collisions became known as “Blake Hits.”

“I was stepping up roasting these kids,” Bolden said. “I had no fear. It was a great way to release tension and prove myself. I felt strong, so I went for it.” 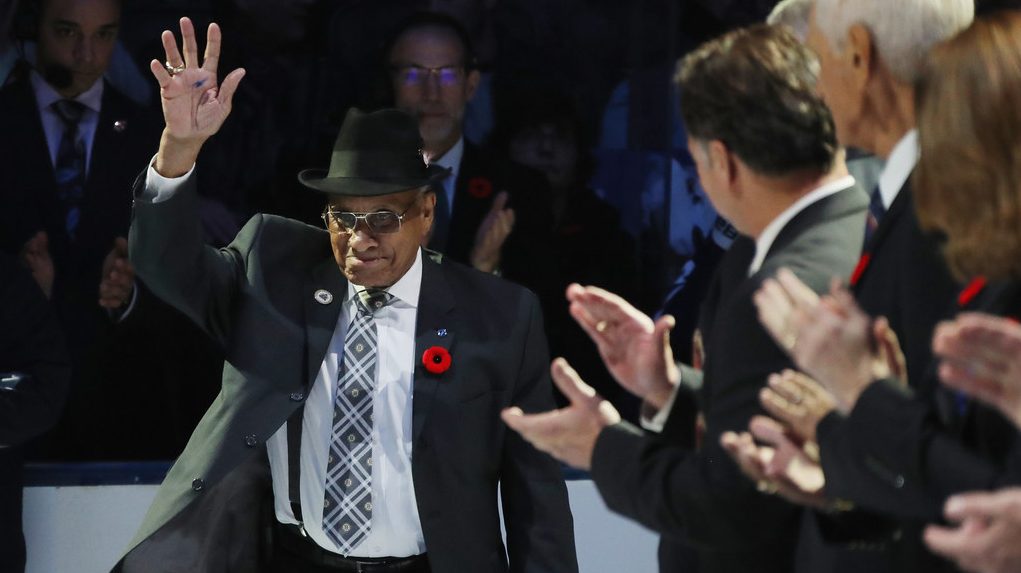 Playing hockey gave Bolden a sense of control because her ability often influenced the outcomes of games, but the early start to her stint with the Barons came with several challenges. As the only girl on the Barons, and with only one other girl in the league, Bolden had to dress separately from the team on the road.

Bolden’s willingness to play for the Barons and her ability on the ice didn’t go unnoticed. Her teammates grew to have her back whenever opposing players targeted her. She’ll always remember one particular incident.

“I was called the N-word during a match while in front of the net trying to protect our goalie from someone scoring on us,” Bolden said. “My teammates heard it and they got on this guy like stink on poo. I earned their respect. I felt protected.”

Bolden and her family began to consider she might have a real future in hockey when she was in the eighth grade. Cleveland wasn’t strong in high-level girls’ hockey, and paying tuition at an area private high school, where top hockey programs were most prevalent, was out of the question, Bolden said.

The trajectory of Bolden’s career changed with a phone call from Thomas “Brody” Broderick, the associate head of school and head coach of Northwood School, a boarding school in Lake Placid, New York, with an elite girls’ hockey program. Broderick first learned of Bolden from his brother-in-law, who was friends with her coach from the Barons.

Broderick was convinced when the Barons played Northwood’s girls’ team in an exhibition.

“In the eighth grade, she was already in the top 10 of our 20 players,” Broderick said.

Bolden became the school’s first and only Black student during her four years there. Broderick promised to support her, and the student body followed.

“After two weeks at school, everyone knew she was a person of character and integrity,” Broderick said. “She got respect.”

Broderick also promised Bolden she would earn a Division I college scholarship.

“He was like, ‘You’re that good and that’ll happen if you’re humble about it and work your butt off while you’re here,’ ” Bolden said. “I was there for the hockey, obviously, and to get an education, but I was there to get a college scholarship because my mom wasn’t trying to pay for college.”

“I was starting to get told I was the first this and the first that and I didn’t realize how big it was until young girls started telling me how I was their idol. That really humbles you. That meant so much to me, because I was becoming the role model that I would’ve liked as a kid.”

Bolden accomplished enough at Northwood to become a member of the U18 national team that won a gold medal in girls’ hockey in 2008 and 2009. She also earned a scholarship to Boston College, where she made an immediate impression by leading all Hockey East freshmen defenders in scoring with four goals and nine assists. Bolden became captain her senior year, earned Hockey East Defensive Player of the Year and All-America honors. She finished her college career with three Frozen Four appearances.

After Bolden graduated, the Boston Blades selected her fifth overall in the 2013 CWHL draft. She led her team to the Clarkson Cup in her second season. She became the first Black woman to compete in the NWHL the following season in 2015. In 2016, she helped the Boston Pride win the Isobel Cup. Bolden also had one of the hardest slap shots in women’s hockey at 80 mph.

Bolden reached a new place in her career.

“I was starting to get told I was the first this and the first that and I didn’t realize how big it was until young girls started telling me how I was their idol,” Bolden said. “That really humbles you. That meant so much to me, because I was becoming the role model that I would’ve liked as a kid.”

Bolden left the NWHL and played a season in Switzerland. She returned to the U.S. and played two seasons with the NWHL’s Buffalo Beauts. She was the league’s defender of the year in 2019.

During that same year, Bolden moved in with her fiance in San Diego. Southern California isn’t exactly a hotbed for hockey, but she stayed close to the game with her mentorship program and coaching. She also connected with Renee Hess, founder of Black Girl Hockey Club, an organization that focuses on making hockey more inclusive for Black women and their families and friends.

Hess and Bolden met at a conference that Kings president Luc Robitaille also attended. Bolden was introduced to Robitaille.

“We started talking and he asked me if I ever thought about being a scout,” Bolden said. “The next thing I know, he says to send my résumé and let’s talk.”

“Rock your curls and natural waves, wear items affordable for your family and be proud of who you are and where you come from. I didn’t figure that out until later. I want these kids to figure it out sooner.”

That chance meeting with Robitaille developed into her position as a scout for the Kings in the American Hockey League in the Pacific division that started in January 2020. Unfortunately, shortly into the job, things were slowed because of the coronavirus pandemic. But the Kings also used the downtime to develop the idea to have Bolden help diversify interest in hockey in Los Angeles. She became the organization’s growth and inclusion specialist.

Besides scouting, Bolden works closely with the community relations and hockey development team, where they have community events and introduce hockey to kids who wouldn’t otherwise know about the sport.

Bolden’s work with the Kings is an example of what the NHL is trying to achieve across the board.

“Representation matters, and it’s extremely crucial when we continue this movement of diversity in our game on and off the ice,” said Jeff Scott, the NHL’s vice president of community development and growth. “What Blake’s been able to do as a player and being able to bridge that in a postcareer is inspirational.”

Bolden hopes the lessons from her experiences will motivate a generation of young Black girls who play or are interested in hockey to remain true to themselves throughout the process. Bolden, for example, remembers wanting her mother to change her natural hairstyle and often pleading with her for expensive items the family couldn’t afford so she could fit in with her peers.

“Rock your curls and natural waves, wear items affordable for your family and be proud of who you are and where you come from” is Bolden’s message to Black girls who play hockey. “I didn’t figure that out until later. I want these kids to figure it out sooner, so they can break records in their own careers and chase their own dreams, and not feel like they have to be something they’re not.”