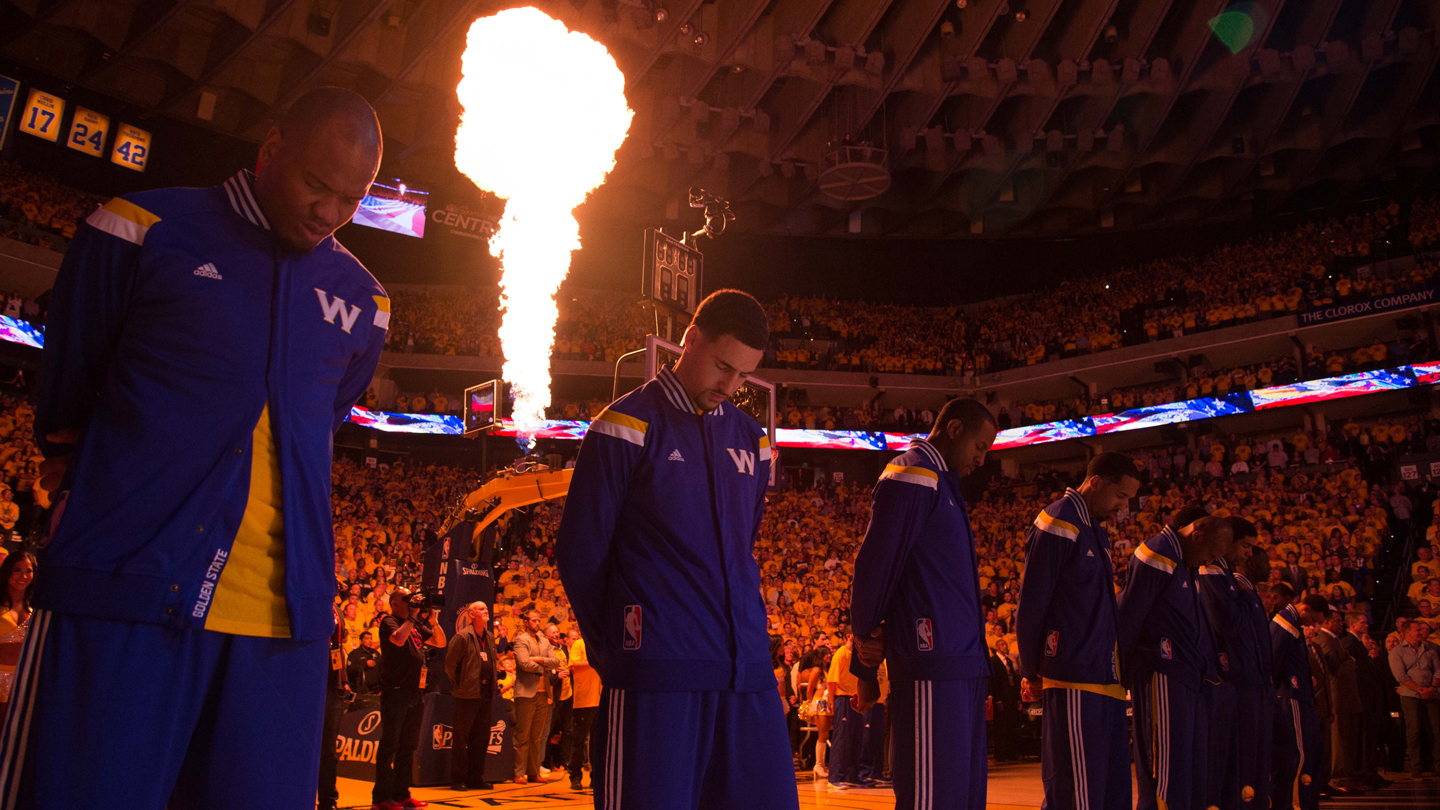 Will the NBA suffer because the Warriors have vacuumed up too many stars?

There will be no redistribution of wealth in the NBA this year. It remains the league where the rich get richer and the poor get poorer.

Congratulations, Kevin Durant. Today, you, Stephen Curry and the Golden State Warriors are officially the 1 percent. From America’s “run gun and have fun” team to the NBA’s Death Star — just like that.

While the Bay Area preorders Durant’s Warriors jersey and matching bobblehead, allow me to play the “get off my lawn!” curmudgeon. I don’t do this because I’m bitter the Washington Wizards are among the 29 teams who have no shot next year, though it probably helps my position.

Look, Durant joining a team that just won 73 games and came within a 3-pointer from Cleveland Cavalier Kyrie Irving of winning their second straight title last month is the greatest free-agent signing since, well, LeBron James came back to Cleveland two years ago. It’s monstrous, an internet-breaker.

But it’s also bad for the NBA — a proposition in which the only acceptable outcome is multiple championships. Otherwise, the Warriors become the greatest waste of talent in league history.

This team cannot overachieve. Eighty-one and one sounds about right, unless you don’t think Durant is worth at least eight more wins. But if they underachieve? I can hear my friend and ESPN analyst Stephen A. Smith now: “AN-DRAY IG-WAH-DOLLA!”

Anything less than multiple titles and Durant looks like the cancer that ruined the beautiful chemistry of the most skilled team of this millennium and maybe the last one as well.

Think about this: The Warriors were less than a minute from their second straight title after the greatest regular season of all time. How much could Durant possibly make them better? Was the team that bad that it needed to jettison some of its best role players to make room for Durant? If they don’t win at least 74 games and multiple championships, this is messing with happy to the nth power.

Another reason this is bad for the league: Chris Paul, Blake Griffin, Derrick Rose, Carmelo Anthony, Russell Westbrook, James Harden and John Wall, all future Hall of Famers, become the next generation of Karl Malone, John Stockton, Patrick Ewing and Charles Barkley — perennial All-Stars, some of the best of their generation, who just happened to be born at the wrong time to win a championship.

As great as he was — and he was the greatest player I’ve ever seen — do you know why Michael Jordan’s Chicago Bulls don’t foster the nostalgia still surrounding Larry Bird’s Boston Celtics, Magic Johnson’s Los Angeles Lakers and Isiah Thomas’ Detroit Pistons? Because Jordan never had a genuine rival. He and the Bulls in their prime were simply too dominant.

The Warriors are in danger of becoming the new Bulls, the new Heat, the new Shaquille O’Neal and Kobe Bryant Lakers. They go from the most likable team in modern history to the guys who got their friends to play with them so they could hold the court until dusk. Other than their fan base and people who like to see stars dwarf little people, no one wants to see someone win every year.

Maybe that’s my real bone to pick. I don’t begrudge Durant anything, or the Warriors, who I ♥. Durant bears no responsibility for the well-being of the Oklahoma City Thunder or the league. His job is to make Durant happy, and he did that in a move that all but obscured fireworks on a national holiday.

But I feel like we lost the ethos of what the Warriors represented on Monday in some hard to explain, fanboy way.

For all their milestone wins, two pulsating playoff runs into June and one title, the Warriors, before Monday, were the “little team that could” — and did. Despite Draymond Green’s high knees, they were unadulterated fun, their best players smaller than the average NBA behemoths, their unparalleled skill neutralizing everyone’s size and strength. Curry, Klay Thompson, Andre “Iggy” Iguodala and Marreese “Mo Buckets” Speights almost felt like a Little Rascals’ clubhouse more than a roster. Away from the floor, even the irascible Green came across as a big kid at heart.

After years of entertaining teams like the “Run TMC” Warriors of Tim Hardaway, Mitch Richmond and Chris Mullin, Steve Nash’s Phoenix Suns and Chris Webber’s Sacramento Kings getting punked by physically superior playoff teams, along came this highly functioning unit of shooters, passers and cutters, moving the ball and hitting 3-pointers from way beyond the arc.

They were an elixir for those unsightly wars of the ’90s between the Miami Heat and New York Knicks and every ugly, isolation play with 18 seconds left before halftime, where one talented guy uses nine others — including his four teammates — as pylons on his way to a bad shot.

Now? They go from representing the Rebellion — the antithesis of every team of big oafs so hard to watch — to the Evil Empire. It feels like Team Collusion in Miami all over again.

To be fair, I spoke with two very smart people about the decision – the Hall of Famer Thomas and current NBA free agent Caron Butler. And they completely disagreed with my take.

“To have the opportunity to potentially see a team like this play in the NBA — this type of talent, this type of firepower — I think it’s going to be truly exciting. They’re definitely going to be must-see TV,” Thomas said. “I believe in dominance. A team like this can make the game better if it makes everyone else reach for another level of excellence.

Butler felt much the same way: “I’m happy for him. I think he made a basketball decision. It’s a great opportunity to win now and win quite often for the next few years. For him now it’s all about legacy, titles. He’s done everything else.

“It reshaped the whole league, you know what I’m saying? This is a force to be reckoned with. How can you not like watching that team?”

Of course, players look at this differently than many fans do. This is a business, and beyond the millions they can earn, the business of winning championships is the greatest commodity for any elite athlete.

Still, something about this move stings. You can make an argument that the Warriors now have four of the top-10 players in the league. The Los Angeles Clippers, San Antonio Spurs, Portland Trailblazers, Oklahoma City Thunder, et al. suddenly become hopeful Goliath-killers instead of bona fide contenders. James and Cleveland aren’t defending champions today. They’re Rocky in high-tops.

This is your NBA, America. If I’m the Wizards or any “second round and out or worse” franchise, my new marketing plan will simply be: Come see the Warriors play in our arena. Watch Durant, Curry, Thompson, Green and the greatest basketball show on earth — because, at least on paper, we’ve got no shot.

Oklahoma City’s Westbrook, most of all.

“When you had Harden, Durant and Westbrook, you had the potential of having one of the best 1-2-3 combinations in the history of the league. And just one is left.”

Another small market gutted, soon back to irrelevancy, just like the Kings more than a decade ago. The axis of power in the league shifts toward a constellation of stars again.

Each NFL, NHL and Major League Baseball season brings hope anew for fans of the downtrodden. But the new NBA? Last season, there were five teams with legitimate shots to win it all — the Warriors, Spurs, Cavs, Clippers and Thunder. This season? Two. Tops.