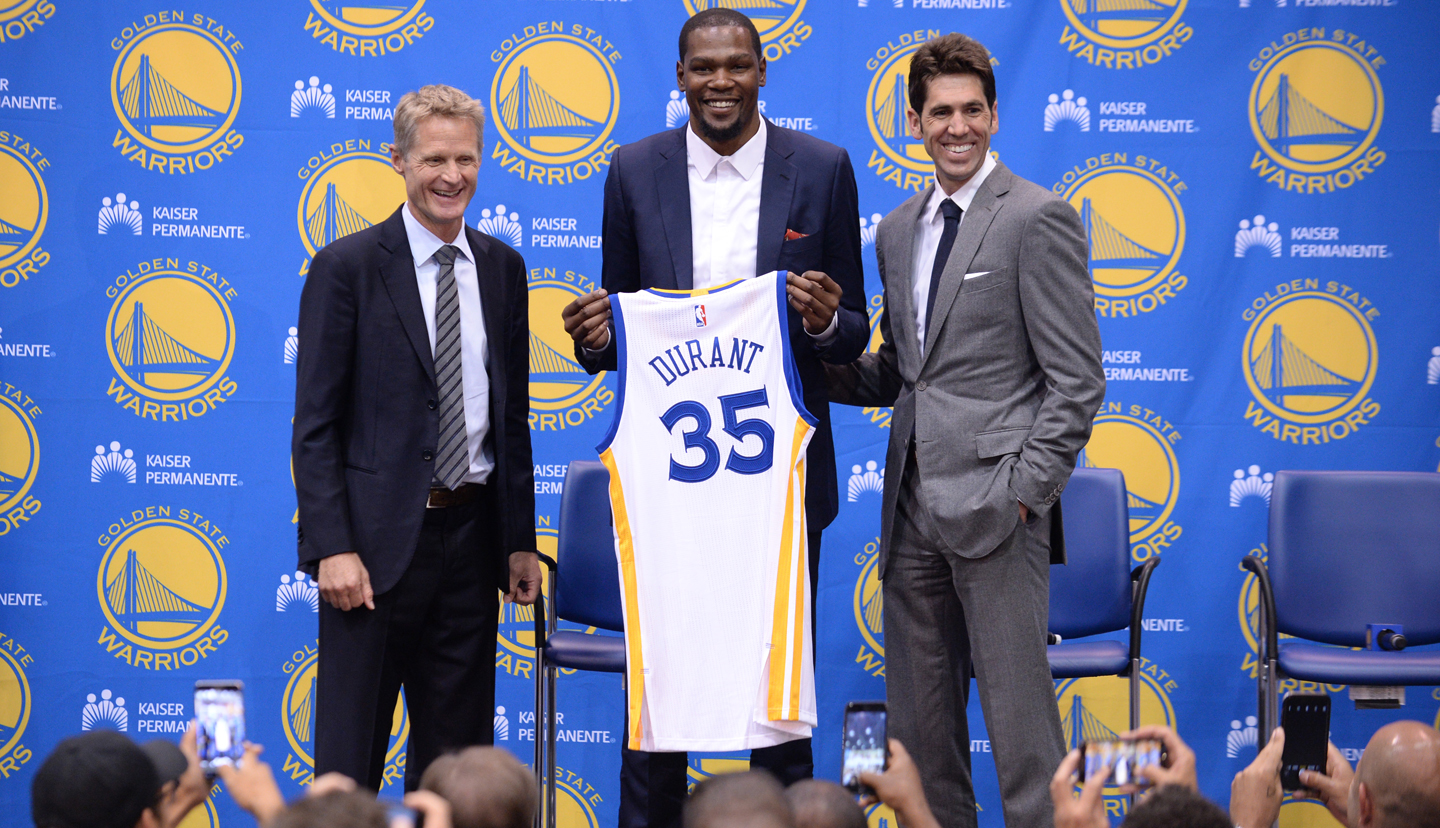 KD’s dad: It was time to ‘be selfish’

Wayne Pratt gave his son, Kevin Durant, a specific piece of advice before NBA free agency began July 1. He wanted him to do something out of character for the coveted basketball star.

“‘For once in your life be selfish and think about yourself,’” Pratt said he told his son. “That’s the only thing I could tell him. And it’s hard for him to do that because that is not in his personality. But sometimes in your growth as a man you have to be selfish and make decisions that are based on him and his future family.”

The safe bet was that Durant would return to the Oklahoma City Thunder, where he had played his entire nine-year NBA career with the franchise. The Washington, D.C.-area native didn’t even consider his hometown Washington Wizards. And it seemed the odds were against Durant joining the Golden State Warriors after they overcame a 3-1 deficit to beat the Thunder and advance to the 2016 NBA Finals, right?

Wrong. Instead, Durant, 27, took his dad’s advice on July Fourth and chose the Warriors.

“It was growth as a man,” Pratt said. “The majority of decisions that were made for Kevin were made by me or his mom. This time it was made by him using all the information that he gathered. He came up with a logical decision. To me as a father and a husband and a man, it was good to see him make a man decision.”

NBA followers and Durant fans are familiar with his celebrity mom, Wanda Durant. Remember the 2014 NBA MVP calling his mom “The Real MVP” at the press conference? Wanda Durant has become a television star and media darling ever since, including becoming the subject of a Lifetime movie that aired May 7.

“Wanda being in the spotlight isn’t wrong,” Pratt said. “She deserves that. She worked hard.”

According to The Washington Post, Pratt was 23 when he left Wanda Durant and their two sons, Kevin and Tony. Kevin was about 1 at the time. (Durant uses his grandfather’s last name.) It took about 10 years for Pratt to regain the trust of his boys and get on decent ground with his ex-wife, the Post reported.

As Durant walked away from his Warriors press conference Thursday, he offered words of love and respect for both his parents.

“Support. He knows who I am deep down inside,” Durant said about his dad to The Undefeated. “He wasn’t there trying to out-talk anybody. He just listened. And if I needed some advice, I went to him. My mom was amazing in this whole process. After every meeting, I was texting and calling her and I was just asking for her advice. She was so happy. I wish she was here right now, but it was just such short notice.

“Both of my parents were just amazing. I couldn’t ask for a better set of parents. It made this transition a little easier.”

Before free agency, Durant said his father, his agent Rich Kleiman, and his personal manager and friend Charlie Bell would help him make his decision. Pratt was present during his son’s introductory press conference with the Warriors on Thursday, sitting in the front row. The Warriors introduced Pratt, but as soon as he took a picture with his son holding up his new jersey, he got away from the stage and the media horde.

There have been countless stories about black athletes without a father presence. Wouldn’t it be good for black America to see Durant’s father now?

“I don’t think so,” Pratt said. “The people that know, know me. Back in my community, everybody knows me. I’ve been a mentor. I’ve coached basketball. I’ve been a police officer for over 20-something years. I’ve done what I need to do for the people that need to know me.

“If you go back to Washington, D.C., and ask people about me, they will tell you. I don’t feel I need to boast about that. If Kevin needs me to be there, I’ll be there. I will stand in front of the camera if he asks me to. Just sitting where I’m at, I’m good with that.”

Pratt played high school basketball at Potomac High School in Maryland and currently is the junior varsity boys coach at Friendship Collegiate High in Washington, D.C. He says he knew his son would be an NBA player in the middle of his high school career. The 2006 McDonald’s All-American was widely considered to be the second-best high school player in the country 10 years ago, behind Greg Oden.

Pratt would often call his son “Green Room” when he was in high school, in reference to the NBA Draft Green Room where the top prospects wait on draft night.

“When he was playing his junior year I used to yell, ‘Green Room!’ ” Pratt said. “He used to say, ‘Dad, you have to stop saying that.’ I saw that he was going to be special. I saw that in between his 10th- and 11th-grade year. I said, ‘This kid is going to be a lottery pick.’ I kind of saw that his game was unique for his size.

“He would tell me to stop saying that because he is so humble. I was just saying that I saw talent. Being a high school basketball coach, I had never seen anything like it.”

Durant lived up to his father’s projection and much more.

Durant was taken second in the 2007 draft by the Seattle SuperSonics (who moved to Oklahoma City and became the Thunder in 2008). He was the 2008 Rookie of the Year, a seven-time All-Star and a four-time NBA scoring champ. Durant also led the Thunder to the 2012 NBA Finals. But he is still without a championship, which added to the attraction of joining the Warriors, who won the championship in 2015.

Pratt was present while his son held meetings for four days with interested teams. Durant met with the Thunder in Oklahoma City and in the Hamptons, and with the Warriors, Los Angeles Clippers, Miami Heat and San Antonio Spurs in the Hamptons. Pratt said he sat next to Warriors owner Joe Lacob during the Warriors meeting.

“In this process right here, as he’s growing as a man, you want your son to be able to make a decision based on all the information that he can get,” Pratt said. “That was important to me.”

Durant said he went to sleep at a rented mansion in the Hamptons in New York on July 3 with no clue what franchise he would pick. Pratt added no pressure. When Durant got up around 7 a.m. July Fourth, he woke up his father, Kleiman and Bell to tell them it was in his heart to go to the Warriors.

Full of emotion, the four celebrated and hugged. Pops was elated and proud.

“When he woke us up, I know he was confident in the decision that he made,” Pratt said. “He woke us all up in the morning saying he knew where he wanted to go. We were asleep. He told us he wanted us to go downstairs to talk to him. He said, ‘I want to be a Warrior.’