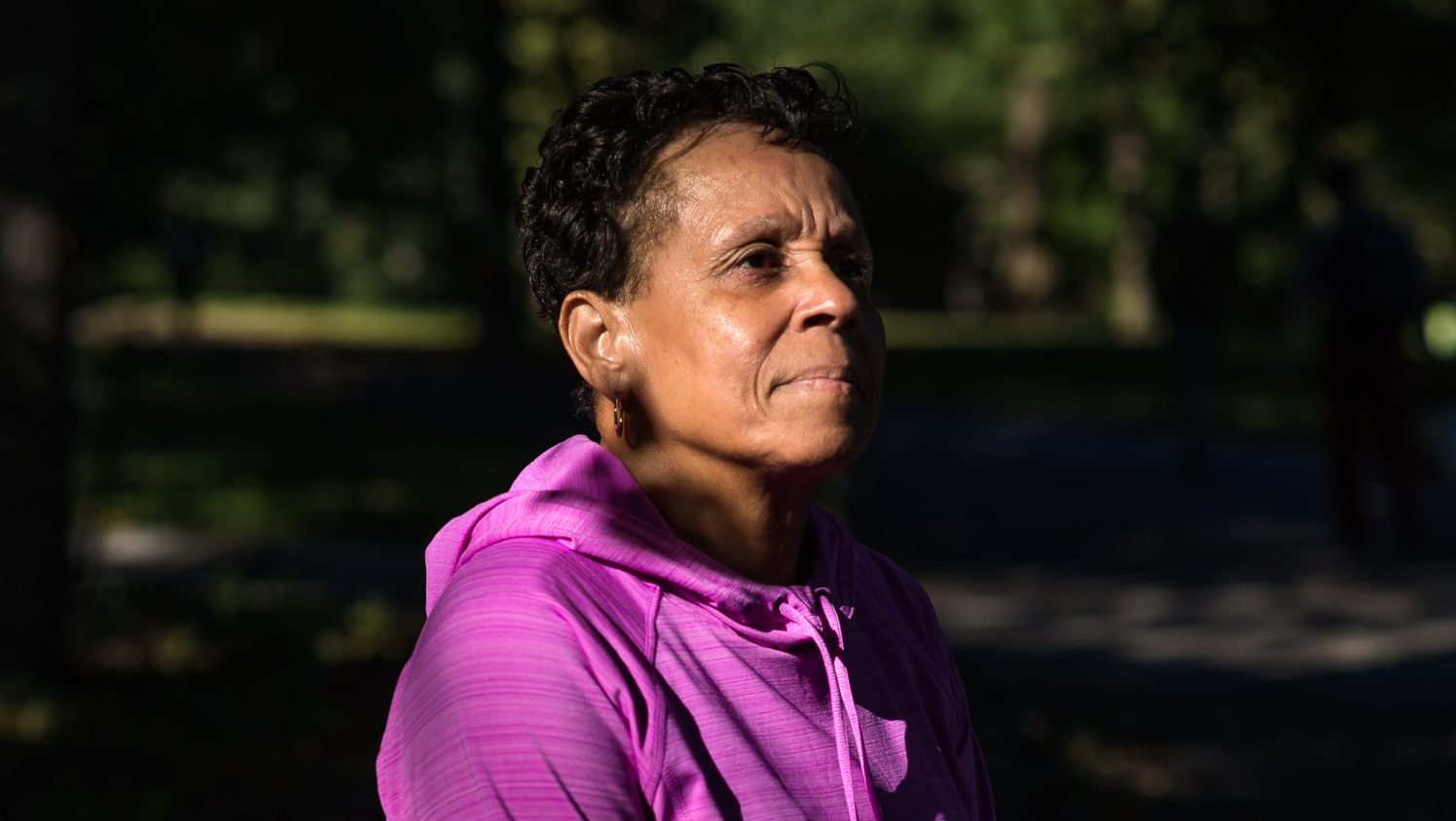 Marilyn Bevans, 69, revisits the finish line of the New York City Marathon in Central Park on Oct. 12. Idris Solomon for The Undefeated
Track And Field

As the New York City Marathon nears, the legend talks about her legacy — and welcomes a new generation of U.S. distance runners

NEW YORK CITY — It’s a bright fall October day. A bike whisks by, leading a group of runners on a marathon course. Its rider is playing Chaka Khan’s “I Know You, I Live You,” the perfect soundtrack for a radiant afternoon in Tribeca. The unmistakable energy that fills the five boroughs every autumn can’t be denied.

The New York City Marathon is right around the corner. The largest cheer squad/party on the 26.2-mile racecourse takes place on the east side of Harlem. It’s like Howard University’s homecoming that time Drake showed up in 2012 — but this happens each year on New York’s racecourse. Everyday working-class folk cheering for 50,000 runners in the greatest city in the world.

On this day, however, just a couple of miles south of the Central Park finish line, the Roxy Hotel houses one of the most under-acknowledged athletes to step foot on New York’s most coveted racecourse. Marilyn Bevans is the first world-class African-American female marathoner, and a living legend.

But Bevans, now 69, didn’t only defeat the competition on race day, she won against generational bigotry. Her journey set the world on notice that African-American runners weren’t just sprinters. Also, there was no Title IX back then, and track and field wasn’t offered in Bevans’ high school.

However, she persevered. And forced people to question their perceptions of what it means to be an American black female distance runner — while also inspiring today’s runners. At the Roxy, Bevans was joined by her friend and fellow runner Donna Lewis, as well as by Dannielle McNeilly, Sharada Maddox, Erica Stanley-Dottin and (co-founder) Knox Robinson — all athletes from the New York-based running crew Black Roses NYC. The topic of discussion: Who is Marilyn Bevans?

How did you get into running?

I always loved to run. I’d see guys running on TV, watch them compete. I’d go running in the park near my house. When I went to join the track team, there [was] none. Back then, before Title IX, there were no girls’ or women’s teams. Same thing in college. There were no track teams or cross country teams for women, just the guys. So for many years, I just ran and ran and ran. It was fun for me.

At what point did running become more than just fun?

It was back in the ’70s, and the Baltimore Road Runners were just getting started. I got invited to run with them. At that time I represented both blacks and women, because the only members were white men. We were training for the Maryland Marathon. I came in second place that day; I ran 3:31 in my first marathon. I’d prepared during training, but after that I knew I could do better. I wanted more.

You went on to win the Maryland (now Baltimore) Marathon twice.

Not everyone was happy to see me win back then. Once, I was so excited I began to jump up and down. As I’m celebrating … some fella walks up to me. I don’t know if he was a race organizer or someone working the event or just around the finish line, but he told me to stop. He said I looked foolish. I’ll never forget that day. I’m a patient person, I thank God for that every day. But I was upset! Maybe one day he should go win a marathon and then he can celebrate how he chooses, that’s what I wanted to say to him. Back then, people would say, ‘You’re a credit to your race.’ They meant it as a compliment, but I didn’t appreciate it. Or they would compliment me on how articulate I was. I’m a proud graduate of Morgan State University. How am I supposed to sound?

“There were no wireless headphones. I would run with my transistor radio. I didn’t have a GPS watch. We used to place markers on trees.”

What changes have you noticed over the years?

We didn’t have fancy shirts that kept you dry. We didn’t have fancy backpacks with water in them. We had a police station and a fire station that had a water fountain. There was a pipe in the park that had fresh spring water running from it. There were no wireless headphones. I would run with my transistor radio. I didn’t have a GPS watch. We used to place markers on trees. Things have changed over the years. … They respect women for being athletes more now. No disrespect, but today, if a woman is a strong performer in her sport, she isn’t automatically assumed to be gay. You can be strong, feminine, great at your craft, and love men too. … God forbid you beat a man, then you’re the worst thing ever. People would say the nastiest things.

The impact of your legacy can be felt today within running crews like Black Roses NYC.

I want to congratulate Dannielle, Sharada, Erica and Knox on their accomplishments. … It’s amazing and warms my heart to see young, healthy, black and brown people running and running hard! It’s not something you see every day.

You competed in over 25 marathons during your competitive days. Which one was your favorite?

(Cracking a slight smile) Favorite race? You’re asking me what my favorite race was?

“I’d go home and lay down for an hour or two just to alleviate the anxiety and stress of racing.”

Yes. What was your favorite?

As a competitor, none of my races were my favorite because they had to hurt. When you’re running a marathon and you’re trying to go under three hours and you’re trying to place, you’re not taking pictures and waving at the crowd. You are banging along. It takes a lot. I’d go home and lay down for an hour or two just to alleviate the anxiety and stress of racing. Racing wasn’t fun. And even now — I’m older, and I run for fun — I still don’t like getting beat by a bunch of people, even if I’m first or second in my age group.

What was the New York City Marathon like for you?

Nice experience, but I never ran well there. I remember running up Bedford Avenue. Things got very, very quiet. You could hear a pin drop. When I ran the NYC Marathon, the racecourse was several loops around the Central Park, then it changed to go through the boroughs and over the bridges. They used to have a priest and have Mass before the marathon. I thought that was so cool. New York City is a great city, and you get to experience it all on the racecourse.

I enjoyed training. I loved training. I wasn’t thinking about being the first [black woman], honestly. I just wanted to be the best and compete. I wanted to win, and I knew with hard work I was going to have a shot.

Is it true that you never had a running coach?

I never had a coach. I had came so far on my own without one, after a while, I don’t think getting one would have been a good idea. I had a system, and it worked.

Who did you train with?

The Baltimore Road Runners were very helpful in getting me started. Over the years, I started my own running club called the Baltimore Suns. Those guys really helped. There were some black men in the community who became my running buddies. Brian Lee, Michael Bruce, Herman Sykes. We trained together and pushed one another.

So you didn’t set out to be a legend and pioneer?

I never really thought about that. When I was competing, I just wanted to be the best. I wanted to improve and run faster and [be] stronger and compete. I’m thankful for running. I was able to travel the world and race in other countries and win prize money and really just enjoy doing something I loved. But back then, I wasn’t thinking about 2018.

“There were no track teams or cross-country teams for women, just the guys. So for many years, I just ran and ran and ran. It was fun for me.”

You’ve lived through Emmett Till’s murder, Brown v. Board of Education, John Carlos and Tommie Smith at the 1968 Olympics, and Title IX.

When I was a child, my mother would send me to camp in Virginia. I went away for two months every summer for many summers. We were in the country, by the Blue Ridge Mountains, and when we’d go for hikes, someone would yell out the word “n-—-!” Whenever we’d attend the local amusement parks, there was a colored bathroom and a white bathroom. When I was in high school, I remember asking my guidance counselor about college. ‘College admissions?’ They’d say that to suggest I was somehow wrong for asking. They said, ‘You can go to Morgan [State University], but you can’t go anywhere else.’ Back then, a black person going to a primarily white institution wasn’t encouraged. I’m glad and proud I graduated from Morgan. But looking back, a lot of choices were made for black people, and that’s just not right. Back then, we had to fight for everything.

Do you have any regrets?

I developed exercise-induced asthma during my last few years competing. I had qualified for the first qualifying standards for the women’s marathon in the Olympics, but at that point I was done. I would have loved to run in the Olympic trials that one time, just for the experience. I don’t know if I would’ve made the team, but that would have been great.

What advice do you offer runners?

Percell Dugger is a New York City-based strength coach and Jordan brand trainer. He enjoys long runs with his mini-goldendoodle, Bunchy, practicing a vegan-adjacent lifestyle, and believes the key to life is letting a black woman love you. MAN WHAT A TIME!