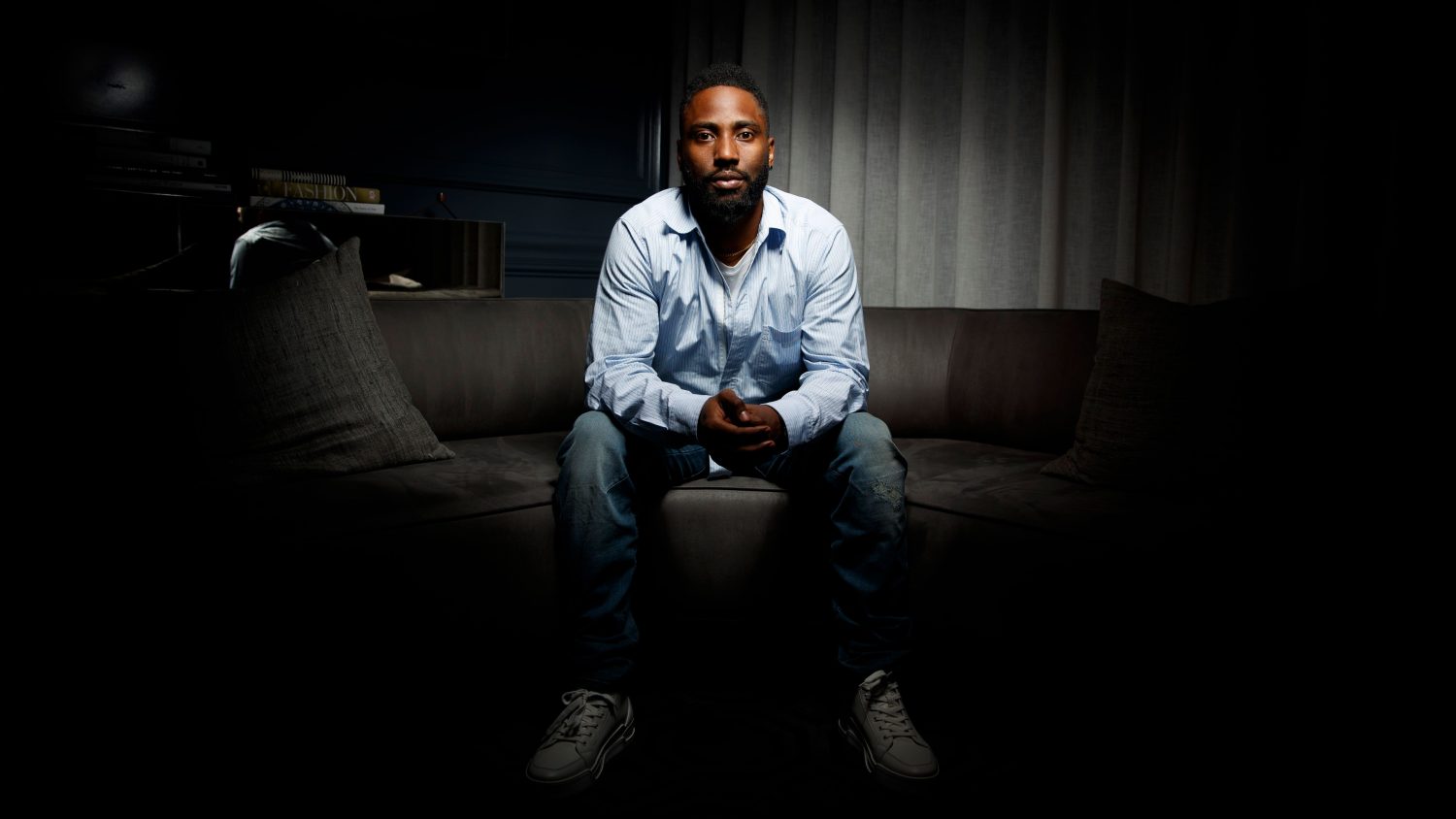 John David Washington, the star of HBO’s “Ballers” and Spike Lee’s movie “BlacKkKlansman,” poses for a portrait in Washington, D.C., on July 26. Ting Shen for The Undefeated
Hollywood

The star of HBO’s ‘Ballers’ and Spike Lee’s ‘BlacKkKlansman,’ former Morehouse star running back and NFL player does things his way

John David Washington’s master plan was not football. Football was the escape. He fell in love with acting when he was 5 years old. He was watching his father pace as he was running through lines from Richard III for a Shakespeare in the Park performance. “When we were walking the streets,” said Washington, 34, “sometimes he would recite his lines. … I loved the language … loved those words.” And he loved the man who was bringing those words to life.

His father is celebrated actor Denzel Washington, and the elder Washington had collected his first Oscar win earlier that year for his performance as Pvt. Silas Trip in 1989’s Glory, the story of one of the first all-black military units of what became known as the U.S. Colored Troops of the Union Army — minus the officers, of course. “I knew then,” said Washington, “that I wanted to do it.” And in case you’re wondering? Washington still knows every line of Glory, his all-time favorite film.

Washington is the eldest of Denzel and Pauletta Washington’s four children. His parents met in 1977 while on the set of Denzel Washington’s first television role as Wilma Rudolph’s high school sweetheart in 1977’s Wilma. Pauletta Pearson portrayed champion sprinter Mae Faggs. The couple got married 35 years ago and are easily one of Hollywood’s most beloved pairings, well-known for their performances and for their outstanding humanitarian efforts.

“My mom was a tremendous artist as well before she got with my father,” said Washington, “and she [told] her stories … all the sacrifices she had to make. She used to sit down and just play piano. All the classical numbers … without even needing to read the score!”

But as much as he loved narratives, and music, Washington moved away from it. And instead of fine arts, he found football. Football was a move away from his famous lineage. No one would compare him to his father on the football field. Denzel Washington’s stint as a college athlete is rarely talked about — the Oscar-winning actor played two years for Fordham’s basketball team before deciding that he was a player and not, well, a player. But his son was a baller. At Morehouse. And good at it. And on the field, no one would be able to say he got there because of nepotism.

“This role frightened me. And that’s a good thing.”

Plus, football was therapy. “I was able to express a lot of my frustrations,” he said. “My anxieties, my resentment [about] how I was treated or looked at, because of who I was related to. I hated the word nepotism. … I knew that if I did well on the field, they can’t say that my father did it. In a way, I just got into character, deep character, in football.”

He loved the sport. He did. But he loved what the sport gave him, more so than what he gave to it. “Because of my father’s ascension, and what was happening after Malcolm X, our life was changing. … People started treating us differently … and it could have gone a negative way … a whole other elitist brat way. I didn’t believe in that, because of my upbringing and my family. … They wouldn’t have that. ‘Where can I put this stuff?’ I put it in football,” he said. “And then I … started getting success on the field, and I saw how I was being treated. As an individual. And that I was like a drug. I needed hit after hit. I needed that validation of independence.”

He got it. Washington was a star athlete at Studio City’s Campbell Hall High School, where he lettered in football, basketball and track. After he graduated in 2002, he headed to Morehouse, where he set a school record his senior year with 1,198 yards, for an average of 5.6 yards per carry, and nine touchdowns. And he still holds the school records for single-game and career rushing yards.

“You are your own man. You took those hits. You ran those yards,” he said in the interview, almost affirming himself out loud. “What ended up happening, though, as I started becoming successful, the press starts getting involved. It’s not John David Washington that runs for 200 yards and five touchdowns, it’s Denzel’s son runs for 200 yards and five touchdowns. So I see this thing was going to be inescapable.”

He went undrafted in the 2006 NFL draft but signed with the St. Louis Rams as an undrafted free agent, and, after being released four months later, he re-signed with their practice squad. “But … even when I made it with the Rams, it was ‘Denzel’s son makes the Rams!’ I knew then that this was going to follow me the rest of my days. I might as well get into the business.” But he was fearful of transition. “I didn’t know how,” he said. “I just kept making excuses.”

“The great Curtis Martin told me the hardest part of the NFL is not ball. It’s everything else.”

So he stuck with football, despite a tugging in his heart to do the thing he fell in love with as a small child. Instead of running lines, he became a running back. “My old teammates,” said Washington, “the Rams, some of them were like, ‘Why you doing this, bro? You can go live in a castle or whatever.’ To me that’s like going back to the ‘hood … ‘I’m never going back.’ ”

It was nerve-wracking because he saw people being cut all the time. “I laughed with my agent once … he was like, ‘J.D., bro, you got the job, they can’t fire you.’ I’m like, ‘Shoot … in the NFL, you can get fired on Week 17. I saw people get cut at the Super Bowl — right before. So every day is a gift. I approached practice like every day was the Super Bowl.”

Washington, when he decided to make a real go at this Hollywood thing, slid in under the radar. All intentional, of course. He wanted people to see him and not his famous, highly decorated lineage. He wanted people to see the 5-year-old version of himself, all grown up with some life lessons behind him, walking in his own purpose and holding his own alongside tested actors.

The first test came with HBO’s Ballers, a fast-paced series that co-stars Dwayne “The Rock” Johnson as a former NFL star-turned crackerjack financial manager of current NFL athletes. In Ballers, Washington is Ricky Jerret, a competitive NFL star who often can’t get out of his own way. The character has layers, and while Washington has the background of living the star-athlete life, he puts some special sauce on his performance, giving us an authenticity almost akin to an intimate docuseries.

A family friend encouraged him to audition for the show. Washington wasn’t so sure. He was on pain medication, feeling down. Plus, he thought it would be smarter for him to study the craft of acting. The friend said, “ ‘Yeah … You can do that. But also learn how to fail and learn what rejection feels like in the audition process. You can do both at the same time.’ I was like, ‘That makes sense.’ ” He went “sort of” under the influence of pain medication because of a torn Achilles. “My mom dropped me off,” he said. “I’m on crutches. It was crazy.”

After his second audition, he said, a woman he performed for told him, ” ‘Don’t play football ever again.’ She said, ‘You need to be doing this. You’re supposed to be doing this.’ She believed in me. Eight auditions later, I get the job. We shoot the pilot. It’s not a guarantee that we’re going to get the show done. Then I go to New York and … I was studying there ever since.”

In truth, Washington plays the hell out of Ricky Jerret. And there’s more goodness coming. This new season, the series’ fourth, has Washington pushing himself even further, giving us an even more robust version of the emotionally complex Jerret, who is struggling this season with whether he should stay retired or play. And if he plays, should he become an activist alongside other football players who are taking the knee during the national anthem.

Football was a move away from his famous lineage. No one would compare him to his father on the football field.

“As far as Ricky goes … I wanted to represent these young men who are getting paid so much money,” said Washington. “So much is asked of them, and they’re not ready. I don’t know if they’re necessarily equipped to handle being a professional. I need the average football fan to see that. To understand these are human beings, just like you. The great Curtis Martin told me the hardest part of the NFL is not ball. It’s everything else. It’s the life that comes with being a professional athlete. I didn’t understand that until I got there. And that’s what I wanted to bring to Ballers.”

He did the job so well that first season that few knew he was his dad’s kid. He stayed away from interviews. He was rarely on a red carpet. He didn’t want to put himself in a position for anyone to give him flak for being the son of a Hollywood living legend. “I wanted it to be about the work.”

And now, he’s going all in. He’s starring in Jordan Peele and Spike Lee’s BlacKkKlansman, which he said was a master class of acting for him. Though it’s set about 40 years ago, the timely film deals with the real-life story of Colorado detective Ron Stallworth, a black man who infiltrated and exposed the Ku Klux Klan. Washington brings Stallworth’s story to life alongside Adam Driver, who plays the white (and secretly Jewish) version of Stallworth for in-person meetups.

The film was successful even before it was released — earlier this summer at the Cannes Film Festival, Lee claimed the Grand Prix award, which is the second-most prestigious award at the film festival. At the time, critics left the theaters in the south of France proclaiming the film one of Lee’s best. Rolling Stone hails it as a “masterpiece,” and calls Washington “quietly devastating” as he conveys the character’s “gnawing isolation.”

“To be able to work and collaborate with the great Spike Lee and Jordan Peele? Those are squad goals right there,” Washington said. “I couldn’t believe it happened. … I know my culture’s history. I went to a historically black college. I learned a lot of things … but this one, for some reason I never heard of until now. This role frightened me. And that’s a good thing.”

What’s next for Washington is recapturing that 5-year-old feeling. He can still see his dad pacing, running through Shakespearean lines. Washington is ready to perform live — this time on a theatrical stage and not a gridiron.

“A wise man told me if ain’t on the page, it ain’t on the stage. I want to do Shakespeare. I’d like to go in the theater. The directors. The producers — that’s really the goal,” he said. “I keep a patriarchal monologue on me at all times. I’m ready to go.”