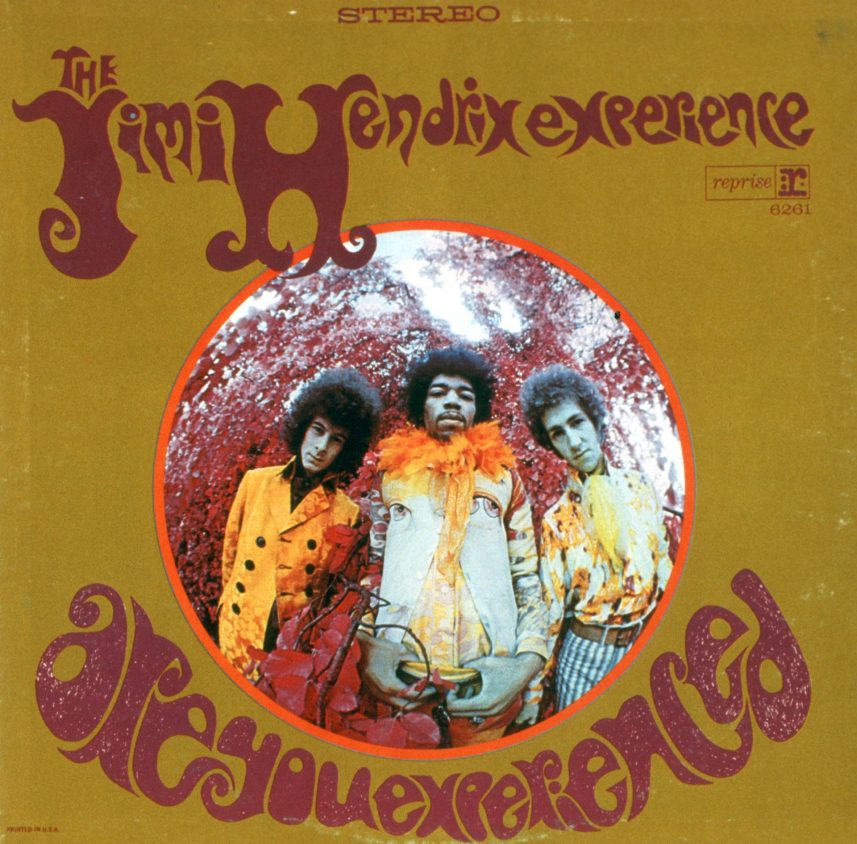 Album cover for the rock band “Jimi Hendrix Experience” record “Are Your Experienced” which was released on August 23, 1967. Michael Ochs Archives/Getty Images
Music

Jimi Hendrix’s ‘Are You Experienced’ turns 50

With hits like ‘Purple Haze’ and ‘Third Stone From The Sun,’ the rock superstar’s first album is as revolutionary as ever

It commences with a buzz. A high-pitched drone, insistent and frenzied, like a wasp tunneling for your brain. The sound builds, intensifying until it erupts in a blast of lurching rhythm and stabbing electric guitar. A male voice, sly and insinuating, arises from the din:

Today, the buzzing sound that opens “Foxy Lady” seems like a metaphor for the buzz Jimi Hendrix created 50 years ago upon his arrival on the international music scene. Released May 12, 1967, “Foxy Lady” is the opening track on the U.K. edition of Are You Experienced, the debut album by The Jimi Hendrix Experience (the LP wouldn’t be issued in the U.S. until August that year). The absolute Molotov cocktail of 1960s rock recordings, Are You Experienced was so powerful, so volcanically innovative, so out there, it changed the course of music history. After its release, rock and R&B music would be harder, funkier, more street, and with an emphasis on virtuosity that rivaled the postwar bebop jazz era.

Along with mid-1960s recordings by the Beatles and Cream, Are You Experienced ushered in the age of psychedelia and high-concept albums. Widely regarded as a benchmark in the evolution of hard rock and heavy metal music, Are You Experienced was inducted into the Grammy Hall of Fame in 1999, an honor extended to records of “lasting qualitative or historical significance.”

Jimi Hendrix live in Gulfstream Park, Florida, (near Miami) in 1968

But most of all, Are You Experienced showcased Hendrix’s extraordinary musical range, from the acid-dropping euphoria of “Purple Haze” to the folklike storytelling of “Hey Joe” and the sensitive R&B balladry of original Hendrix compositions such as “May This Be Love” and “The Wind Cries Mary.” Rolling Stone ranks Experienced No. 15 on its list of the 500 Greatest Albums of All Time, praising Hendrix for establishing “the transcendent promise of psychedelia.” Smithsonian musicologist Reuben Jackson has said Are You Experienced changed music just like James Joyce’s Ulysses changed literature. “You read a page or two of Ulysses,” Jackson told NPR in 2006, “and then you listen to just ‘Purple Haze’ and you think, My goodness, what is this?’ ”

For Jimi Hendrix, Are You Experienced was the culmination of a lifelong musical obsession.

Born James Marshall Hendrix on Nov. 27, 1942, he took up the guitar because “every house you went into seemed to have one lying around.” Enthralled by blues and rock legends such as Muddy Waters, B.B. King and Buddy Holly, Hendrix became proficient via sheer will. Self-taught, he practiced incessantly, taking his guitar almost everywhere.

Though the trio had yet to play its first gig, the Experience had already done something revolutionary. Here was Hendrix, a foppish black man from segregation-torn America, calling the shots in a rock trio featuring two white British musicians. The Experience’s inverted chain of command was almost as jarring as its music, a symbol of racial unity and growing black empowerment amid the backdrop of the civil rights movement.

Are You Experienced was so powerful, so volcanically innovative, so out there, it changed the course of music history.

To promote his controversial new band, manager Chandler arranged a grinding European tour that found the Experience performing in England, Luxembourg, Germany, France and Holland. Initially, the band padded its set with classics such as Otis Redding’s “Respect” and Wilson Pickett’s “Midnight Hour,” but Hendrix’s songwriting muse shifted into overdrive as the tour wore on, resulting in the original tunes that would form the Experience’s debut album. “A lot of material suddenly came out in a very short space of time,” said drummer Mitchell.

The Experience was an instant sensation, garnering the enthusiastic support of Europe’s rock elite and netting the band a recording contract with newly established Track Records. “We got a tremendous amount of help from people like Mick Jagger, Paul McCartney and John Lennon,” Chandler recalled. “They would rave about Hendrix and turn the entire course of an interview around just to talk about him.”

The 11 tracks that would constitute Are You Experienced were recorded over five months in three London studios. The album’s U.K. release was preceded by the singles “Hey Joe,” “The Wind Cries Mary” and “Purple Haze,” all of which rocketed to the British Top 10. To stoke demand for Are You Experienced, it was decided that none of the aforementioned hits would be included on the album’s U.K. edition.

Are You Experienced went on to spend 33 weeks on the British music charts, peaking at No. 2, a tremendous feat for a debut artist. Pundits speculate that the only thing that prevented Hendrix’s debut from reaching No. 1 was the June 1 release of the Beatles’ Sgt. Pepper’s Lonely Hearts Club Band. But while Hendrix had taken Europe by storm, reaction to Are You Experienced wasn’t totally enthusiastic. (“The kindest thing I can say about … Are You Experienced is that I survived one full session,” huffed Liverpool Post critic George Gregson.) Still, such scathing reviews were rare. Having conquered Britannia and its Atlantic neighbors, the Experience set its sights on the U.S.

Fifty years hence, Are You Experienced still inspires both blinding awe and head-scratching bewilderment. “Manic Depression” employs a ¾-time waltz rhythm to communicate a message of mental torment. “Love or Confusion” starts out like a cosmic Indian raga before mutating into a lithe, sexy samba. On “Third Stone from The Sun,” the Experience pits amp feedback and Wes Montgomery-style guitar chords against whirling jazz drums, creating a sound that could only be described as “space swing.” With its stun guitar and lumbering beat, “Purple Haze” sounds like Godzilla leveling Tokyo, while the album’s title track resembles a Scottish bagpipe reel transposed for the rock trio.

Song after song, the album lobs sonic grenades at the listener, leaving mind-bending psychic explosions in their wake. The album betrays Hendrix’s disdain for pop music conventions: None of the LP’s 11 tracks possesses anything close to a traditional, sing-along chorus — unless you think Hendrix frantically repeating “Stone Free!” constitutes a chorus.

Yet, for all their idiosyncrasies, Hendrix’s songs feature some of the most memorable lines in rock: “Excuse me, while I kiss the sky”… “is this love, or confusion?”… “move over, Rover, and let Jimi take over!” His seeming contempt for songwriting norms is all the more impressive considering Are You Experienced was released before underground FM radio reached critical mass, offering artists like Hendrix a platform.

Curiously, music was only part of the debut album’s charms. Though Hendrix reportedly hated his singing voice, his vocals, which deftly staked out the space between whispery tenor and midrange-y baritone, possessed so much gravitas he could make even the most inane lyric sound like divine writ. His lyrics were street poetry that often veered into science fiction territory. OK, so tracks like “Foxy Lady,” “Red House” and “Hey Joe” find him portraying the tongue-flicking Lothario, or the vengeful jilted lover. But on ballads such as “May This Be Love,” he exhibits the vulnerable sensitivity that made him such an expressive musician.

So let them laugh, laugh at me,
So just as long as I have you, to see me through,
I have nothing to lose …

But “May This Be Love” is a rarity. The tracks that bookend that gorgeous ballad seethe with frustration, befuddlement and fear of persecution, including “Purple Haze” (“don’t know if I’m coming up or down”) and “Love or Confusion” (“my mind is so mixed up, goin’ round and round”). On the self-explanatory “Manic Depression,” Hendrix’s frustration seemingly knows no bounds.

These tense, high-strung sentiments beg a question: Did Hendrix suffer from mental illness, perhaps bipolar disorder or worse? Though we’ll never know the answer, it’s interesting to speculate how an undiagnosed emotional disorder might have fueled the guitarist’s matchless creativity, influenced his music and fed his insatiable appetite for adventure.

The other thing “Manic Depression” underscores is Hendrix’s love of music, an affection so deep he wished he could caress it, make love to it. Are You Experienced would reveal just how close Hendrix could come to accomplishing that rhetorical goal, but first he had to endure the real-life experiences that would help sculpt him into rock’s greatest expressionist.

On June 18, 1967, The Jimi Hendrix Experience played the Monterey International Pop Festival, a first-of-its-kind showcase intended to promote artistic rock acts emanating from around the world. Performing on a roster that included Redding, Janis Joplin, The Who, Jefferson Airplane and sitar player Ravi Shankar, Hendrix and the Experience stole the show. Splendid in a ruffled orange shirt and feather boa, Hendrix pulled out all the stops, playing guitar behind his back, with his teeth, between his legs, the works. In a rock ’n’ roll sacrificial rite, the guitarist set his beloved Fender Stratocaster on fire, then smashed it during a finale performance of the rock anthem “Wild Thing.”

The shock of that set is captured in D.A. Pennebaker’s 1986 documentary Jimi Plays Monterey. As Hendrix tosses his shattered guitar into the Monterey crowd, Pennebaker’s cameras pan on some young women in the audience, their faces pallid with horror, confusion and desire.

Roughly two months after that debut U.S. performance, Are You Experienced was finally issued in the U.S. on Aug. 23, 1967. The album remained on Billboard’s Top LPs chart for 106 weeks. Unlike the U.K. edition, the album’s U.S. version included the singles “Hey Joe,” “The Wind Cries Mary” and “Purple Haze.” To date, Are You Experienced has sold more than 5 million copies in the U.S.

Many English rock fans today embrace Hendrix as an honorary Briton. Though he was born and raised stateside in Seattle, Hendrix was born again in the England. The country is rightfully proud to have served as the launching pad for the greatest rock musician ever. Hendrix, Mitchell and Redding are all dead now, the first classic rock band whose members are all dead. Ironically, a song from Are You Experienced suggests Hendrix may have harbored doubts about his future. Entitled “I Don’t Live Today,” the guitarist claimed the track was a paean to the world’s indigenous peoples, but the lyrics could easily be viewed as Hendrix pondering his legacy.

Will I live tomorrow?
Well, I just can’t say …

On its 50th anniversary, The Jimi Hendrix Experience is universally acclaimed. A half-century later, the Hendrix buzz still resounds.

Bruce Britt is an award-winning writer and essayist. He lives in Los Angeles with his three dogs and his Fender Stratocaster guitars.