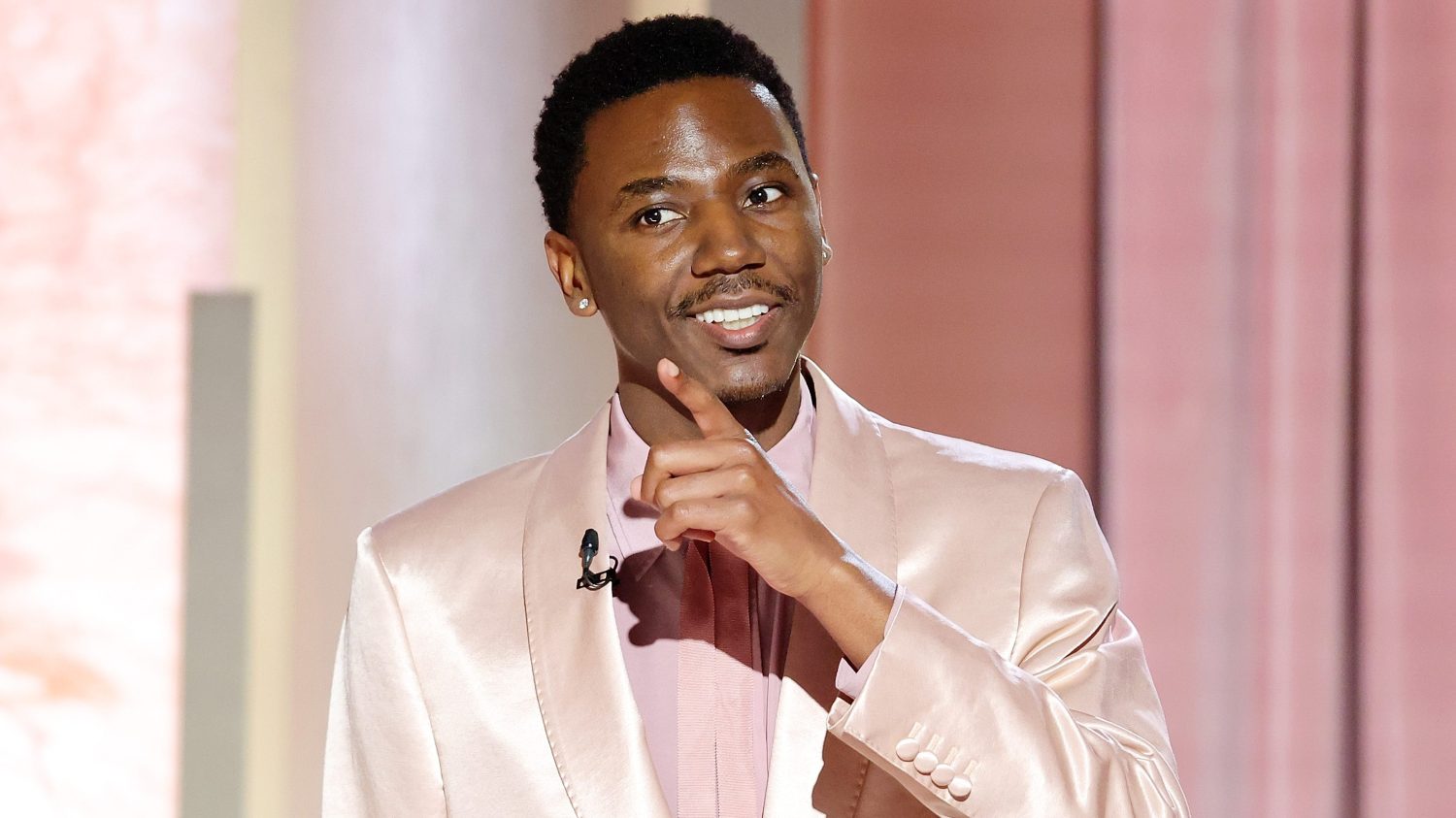 And he wouldn’t let the audience forget it

If you want to understand what good comedy looks like, study Jerrod Carmichael’s performance as host of the 80th Golden Globe Awards ceremony.

The ceremony aired on NBC for the first time in the two years since the Hollywood Foreign Press Association, the organization behind the awards, was embroiled in a scandal involving racial inequity — namely that there were no Black members in their voting ranks and Black performers and their work were not represented when the awards were given out.

We’ve seen comedians host awards shows before, but the jokes are usually canned and flat, meant to elicit giggles from the audience while simultaneously appeasing the powers that be. Carmichael had other ideas.

Carmichael, who was tapped to host the ceremony by the event’s producer Stephen Hill, opened the show by telling the audience at the Beverly Hilton in Beverly Hills, “I’m here because I’m Black.”

That first joke rang the alarm and woke everyone up to what was happening, both on stage and behind the scenes. While the previous hosts shied away from directly addressing HFPA’s issues, Carmichael leaned into them.

“I’ll catch everyone in the room up,” Carmichael quipped before he explained to the audience why his hosting gig was significant.

“This show, the Golden Globe Awards, did not air last year because the Hollywood Foreign Press Association—which, I won’t say they were a racist organization, but they didn’t have a single Black member until George Floyd died, so do with that information what you will,” he said, before adding that he’d been asked to be “the Black face of an embattled white organization.”

When Tina Fey and Amy Poehler hosted the Golden Globes two years ago, their jokes made just enough reference to the troubles HFPA was having without being heavy enough to land an effective hit. While that strategy may work for people who want to make sure they are asked back year after year, they don’t quite do the trick of calling a thing a thing. 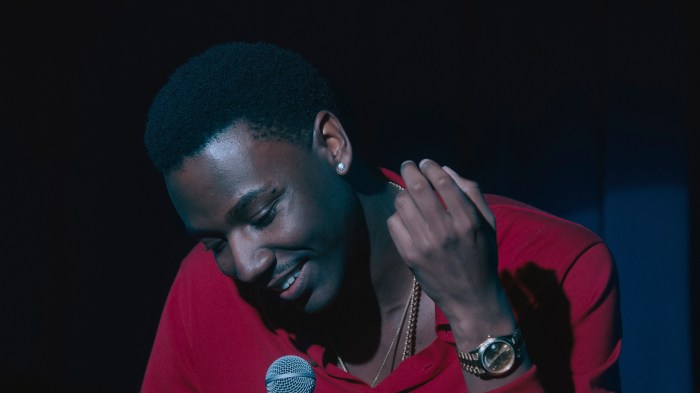 That is what comedy is supposed to do. Good comedians take real life situations and discuss them in a way that is funny enough that the audience doesn’t feel like they are sitting through a lecture, but biting enough that those who are being discussed can feel the sting, especially if they are in the wrong.

For Carmichael, that meant training his fire on the HFPA. Though he said he told producer Stephen Hill he was honored to be asked to host the show, he recognized that the HFPA only tapped him because he was Black. Carmichael told the audience that Hill pushed back, telling him he was chosen because he’s talented, charming, and one of the greatest comedians of a generation.

“But Stephen’s Black, so what does he know,” Carmichael joked. “He’s only producing this show because he’s Black. They’re not going to tell him why he’s here either.”

Of course, Hill and Carmichael were likely chosen because of the HFPA’s fraught racial history. There is no way this show could have aired with a white host and a white producer without giving the appearance that HFPA was turning a blind eye to the issues that landed them in the hot seat in the first place. They had to choose a Black person, and they definitely chose the right one to host in this instance.

“They haven’t had a Black host in 79 years,” Carmichael said during the monologue. “What are they going to do, fire me? I’m unfireable.”

He also revealed that he was being paid $500,000 to host the show and gave every indication that he was doing it for the money, saying he didn’t really believe HFPA had really changed all that much.

HFPA is doing what many organizations do after they get called out for blatant racism or the exclusion of Black people and other people of color. Given their previous lack of diversity, the HFPA seemed to be bending over backwards to highlight Black creatives, and this was reflected in the winners last night as well. That is no slight to the winners because we love Angela Bassett, Quinta Brunson, Tyler James Williams and Abbott Elementary, and we are happy all of them won. But we have to acknowledge what it would have looked like had the Golden Globes gone the way they have in so many years past when both the nominations and the list of winners looked whiter than untouched snow.

Carmichael’s monologue elicited both laughs and uncomfortable looks from the audience, and it set the tone for his entire performance for the evening.

He provided a perfect balance of being funny while still holding Hollywood and the HFPA accountable for the issues that led to him hosting the show in the first place.

No one was safe from his jokes, including Will Smith, Whitney Houston, and actor and Scientologist Tom Cruise as well as the Church of Scientology itself. 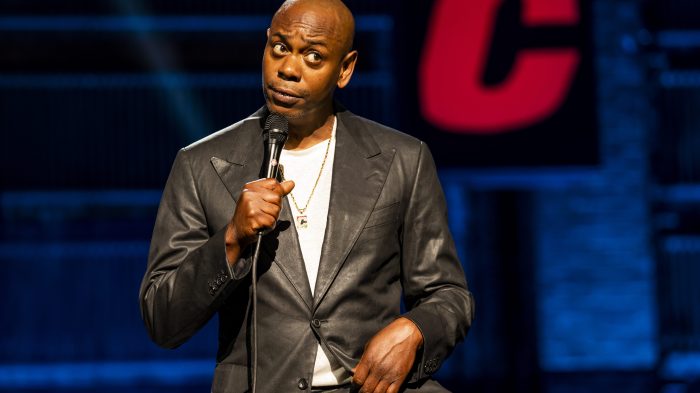 “Backstage I found these, uh, three Golden Globe awards that Tom Cruise returned. Look, I’m just a host briefly or whatever, but I have a pitch. I think we maybe take these three things and exchange them for the safe return of Shelly Miscavige,” he said, and the audience gasped in response.

Shelly Miscavige is the wife of Church of Scientology leader David Miscavige. She allegedly disappeared in 2007 and has not been seen in public since, though police spoke to her in 2013 and concluded she wasn’t missing. There have been many questions as to her whereabouts, including from prominent Scientology dissenter and actress Leah Remini.

Remini sent out a tweet with a clip of Carmichael’s joke, thanking him for making it and asking “Where is Shelly?” in the caption.

Taking aim at actor Will Smith, Carmichael told the audience that Smith had been awarded the “Rock Hudson Award for Best Portrayal of Masculinity on Television” for slapping Chris Rock at the 2022 Oscars ceremony.

Smith is likely never going to live that down, and it’s unfortunate, but the joke was funny. Carmichael was able to take a swing at the incident without hitting either Chris Rock or Jada Pinkett Smith in the process.

When Carmichael was later required to acknowledge the Beverly Hilton Hotel, where the event takes place, he said the awards were coming live from “the hotel that killed Whitney Houston.” 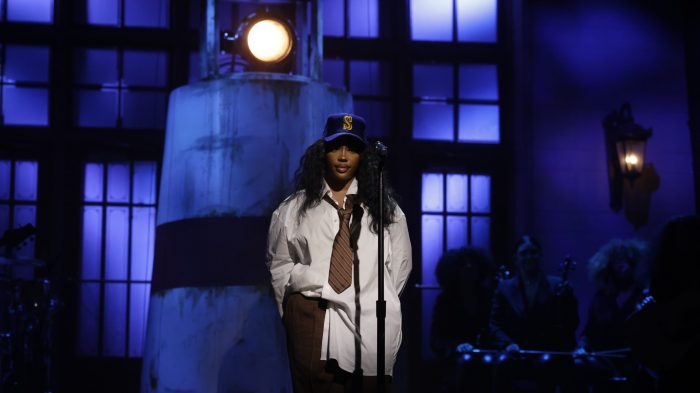 On ‘SOS,’ SZA is trying to sort it all outRead now

As tasteless as that particular joke was — and I cringed when I heard it — it did not detract from Carmichael’s overall performance.

Between the jokes, his straightforward and unapologetic Blackness, his fabulous wardrobe changes, and the way he managed to make the audience laugh every time he was at center stage, he was a study in what comedy is supposed to be: funny, relatable, digestible, understandable and inoffensive to marginalized communities. We don’t want comedians to punch down on those who have already been kicked around enough.

The Hollywood Foreign Press Association still has a lot of work to do, and this year’s Golden Globe Awards ceremony is just the start to that work—something Carmichael kept us mindful of during his monologue and throughout the show.

If anything, HFPA should have him back to host again next year.

He’s funny. He kept the audience engaged. His jokes were on point and resonated with everyone.

Isn’t that what comedy is supposed to be about?