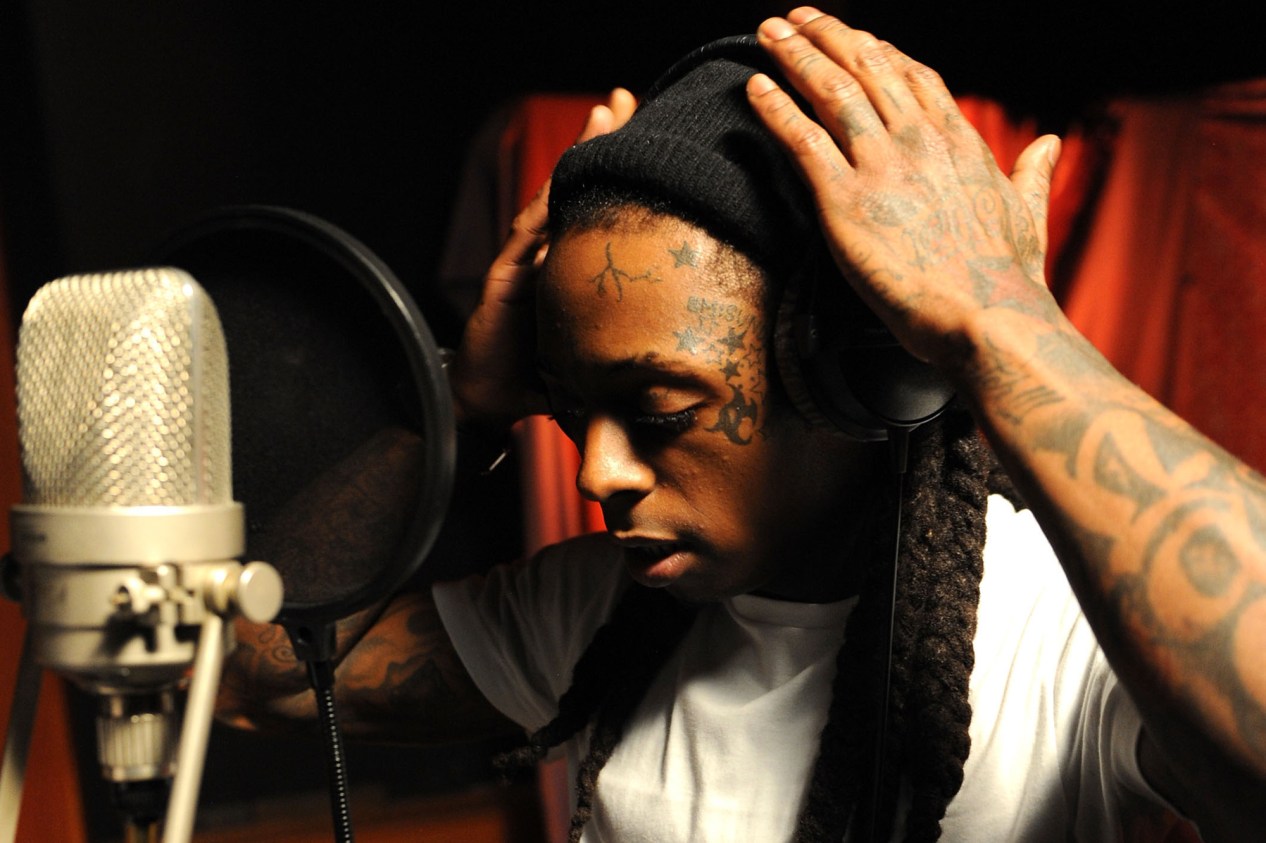 Rapper Lil Wayne performs at the “We Are The World 25 Years for Haiti” recording session held at Jim Henson Studios on February 1, 2010 in Hollywood, California. Kevin Mazur/WireImage
Music

He’s one of the best to ever do it, but let’s not act like he’s the same since Rikers

Lil Wayne was the Michael Jordan of hip-hop once, the greatest to ever hold a mic. Then he went to jail.

Leaving music to serve a one-year sentence for gun possession is, in a weird way, comparable to Jordan retiring from basketball — for the second time, and for what some thought was for good — in 1999. Jordan returned to the NBA in 2001 to play two seasons, but even then he was only ever a shadow of his former self. Lil Wayne is now, too, a shadow. No, he’s not “new and improved” since prison. Lil Wayne is not superheroic. Incarceration is real and it affects the body and soul.

March 8, 2010, the day Lil Wayne arrived at Rikers Island Correctional Facility, marks the end of his reign as the “Best Rapper Alive.” He’d proclaimed himself the best, and justifiably so. The Weezy era began with Tha Carter in 2004, when at the age of 21, he notched his first big hit, Go DJ, which climbed to No. 3 on the Billboard rap charts. He was young, all he did was record — mixtapes, albums, singles, you name it — and he worked with every artist imaginable, from Enrique Iglesias to violinist Miri Ben-Ari and even posthumously the late Notorious B.I.G. Between 2004 and the day he got to Rikers, Lil Wayne was featured on 373 different tracks.

But in the 242 days he spent locked up — a reduced sentence for good behavior — Lil Wayne entered a hell he’s never fully been able to escape. Part of him remains in that New York jail complex. “I’ve unfortunately seen a lot of spirits get broken in this hell hole,” he wrote on his last day at Rikers. “I don’t wish jail on anybody.” While behind bars, Lil Wayne handwrote daily journal entries that were recently published in Gone ‘Til November in his original penmanship.

Tha Carter III. It’s the last hard copy of a CD I ever bought in a store, and probably the last I ever will buy.

The prison memoir, while remarkable, is the only thing of note the New Orleans rapper has released on his own in 2016. Last year, Lil Wayne sued his record label, Cash Money Records, and its CEO, Bryan “Birdman” Williams, for $51 million. He wants out of his contract and believes he’s due money the label allegedly withheld from him for his anticipated 12th studio album, Tha Carter V. Settlement talks have stalled, and the album, which is reaching a Detox-like status, remains in limbo. As an idea formal enough to have spawned four singles since 2012, it’s reportedly complete.

“Because of all the bulls— I’m going through with my record label,” says Lil Wayne in his author’s note, “I wanted my fans to have something from me while they continue to be ever so amazing and patient.”

To all my fans, I want u to know that my album won't and hasn't been released bekuz Baby & Cash Money Rec. refuse to release it.

Sift through Gone ’Til November’s 159 pages and you’ll meet an often perplexed Dwayne Michael Carter Jr., one who is afraid to rap in front of fellow inmates on the prison yard — afraid to be Lil Wayne. While reading, I thought back to 2008, the year that yielded his most successful album, the triple-platinum Tha Carter III. It’s the last hard copy of a CD I ever bought in a store, and probably the last I ever will buy. On the album, with songs such as A Milli, Get Money and Tie My Hands, Lil Wayne went beyond living up to the assertion of his 2005 track Best Rapper Alive. He’d built a one-man dynasty — him vs. everybody else. The Los Angeles Lakers in the ’80s. The Chicago Bulls in the ’90s. Lil Wayne in the mid-2000s.

Some argue that the first decade of the 2000s belongs to Jay Z, and given his seven No. 1 albums in that period, the case is certainly strong. But don’t forget that Lil Wayne was a mixtape rapper — heralded for underground projects, such as his Da Drought and Dedication mixtape series — and yet he still did something Jay Z couldn’t from a studio album standpoint. Tha Carter III sold 1,005,545 copies in its opening week, even after being leaked. None of Jay Z’s 12 studio albums have sold more than 680,000 in the first week. Because as much as Lil Wayne’s fans cherished his free mixtape music, they couldn’t wait to live in the moment of a new album — even if that meant paying for it.

Lil Wayne and Jay Z were certainly the titans of 2000s hip-hop. The common thread? Their ability as pure, natural wordsmiths. They both rarely write down their rhymes, instead channeling the verses from their brains into the microphone. But in prison, there are no mics. “The ultimate high is to know that my creativity can never be taken away from me by anyone or anything,” Lil Wayne says in his memoir. But in jail, his imagination was confined to a pen and paper, and his lyrical originality has suffered ever since. “[Prison] seemed to kill his spirit, his creativity and certainly his output,” grime author Hattie Collins recently said. “Perhaps he felt like he just didn’t have anything to say anymore – he said it all over that 2004-2006 period.”

Despite the success of his first post-prison album, 2011’s Tha Carter IV, which sold 900,000-plus copies in the first week and eventually went double platinum (though not without controversy), Lil Wayne hasn’t released a No. 1 solo album in five years. He’s now competing against younger, skilled hip-hop artists riding a new wave. The ones who were in grade school when Lil Wayne dropped his debut solo album Tha Block Is Hot in 1999. The ones who grew up listening to his mixtapes. The ones who molded themselves with him in mind.

“Lil Wayne,” said Kendrick Lamar last spring, “is the greatest. Not only because of his music, but also because of the culture he put behind it. It was a big part of what he was talking about, so we always hold Lil Wayne in high regards.”

And we should. In 2013, due in large part to the musical heights he reached before going to prison, Lil Wayne passed Elvis Presley as the solo artist with the most Billboard Hot 100 hit songs since the chart was launched in 1958. Elvis has 108. Lil Wayne now has 132. Other solo artists on the list include James Brown, Ray Charles, Aretha Franklin, The Beatles, Jay Z, Elton John and Stevie Wonder. And every now and then, we get flashes of the rapper Lil Wayne once was — cherished glimpses into the past like we saw in Jordan’s return, such as when he dropped 43 points at the age of 40 in 2003. Over the past year, most of Lil Wayne’s genius has been on the tracks of other artists — it has to be, as he strives to completely sever ties with Cash Money.

There’s his verse on Chance The Rapper’s 2016 summer hit No Problem (which also features 2 Chainz): Lord, free Tha Carter, n—– need Tha Carter / Sacrificin’ everything, I feel like Jesus Carter. In September, the three rappers went on The Ellen DeGeneres Show and Lil Wayne made a cleverly impromptu change to the end of his verse. Instead of rapping, If that label try to stop me / There gon’ be some crazy Weezy fans waitin’ in the lobby, Lil Wayne said, If Cash Money try and stop me / I’ma let ’em rob me, yeah, right, like Ryan Lochte.

On the Intro of DJ Drama’s 2016 Quality Street Music 2, his bravado and wordplay returned: I play the hand that was dealt, I got a deck full of aces / I gave birth to your style, I need a check for my labor.

Then there’s his grittier verses, such as the one on Sucker For Pain, the theme song of the 2016 DC Comics film Suicide Squad and the first No. 1 rap hit Lil Wayne has been a part of since 2010’s Right Above It. After his trademark lighter flicks, he raps, I’m devoted to destruction / A full dosage of detrimental dysfunction / I’m dying slow but the devil tryna rush me / See I’m a fool for pain, I’m a dummy.

And of course his most recent feature on Solange Knowles’ Mad: Are you mad ’cause the judge ain’t give me more time? / And when I attempted suicide, I didn’t die / I remember how mad I was on that day / Man, you gotta let it go before it get up in the way. It’s verses like these that show the everlasting effect prison has had on Lil Wayne. Add that to suicidal thoughts, and the deterioration of his relationship with Birdman, and the prospect of his true retirement from music has become a reality.

But he’s still here. He was just on ESPN’s First Take, talking about the Lakers, last week. So for the Michael Jordan of hip-hop, will there ever be a new solo album, like he hinted at on his late 2015 cover of Future’s Where Ya At?

Been to hell and back, came back in mint condition.

I sure hope so.