The five-star recruit is more than just a football player — he also loves to fish. It’s an interest he shares with his new head coach.

JACKSON, Miss. — The moment Travis Hunter slipped on a blue and white Jackson State baseball cap and unveiled a navy blue IBelieve T-shirt hidden beneath his jacket, the rumors started.

Everybody, it seemed, had a theory on why the No. 2 recruit in the ESPN Top 300 committed to JSU. Most of the speculation on college message boards and sports talk radio centered on money, as critics assumed JSU brokered a seven-digit name, image and likeness deal or delivered a briefcase full of cash to his family.

Of course, none of that happened.

Hunter signed with JSU for three reasons: He idolized coach Deion Sanders, Sanders earned his mother’s trust, and he had forged a relationship with Sanders built on their love of bass fishing.

Roll your eyes if you must. It’s true. Sanders, who often refers to himself as Country Prime, loves fishing and hasn’t had a home without a fishing pond in decades.

Sure, Sanders and Hunter discussed football.

After all, the San Francisco 49ers were the favorite team of Hunter’s dad and Hunter has spent hours looking at Sanders’ games and highlights on YouTube. Plus, they talked about how he’d fit into JSU’s scheme.

They also talked about Hunter becoming a two-way player like Sanders was for the Dallas Cowboys in 1996, when he became the first NFL player to do so since Chuck Bednarik in 1960.

And they discussed ways Hunter could market himself, and what Sanders could teach him about creating a personal brand.

But it was their conversations about fishing that cemented the bond.

“We know it was about football, but we didn’t keep that the main focus,” Hunter said. “We like to fish. We’d send pictures to each other. I’m a straight bass fisherman.”

Understand, Hunter has loved fishing since his older cousin T.J. taught him how as a kid.

“In Georgia, if you have a fishing pole, you can find a creek or a park to fish,” said Ferrante Edmonds, Hunter’s mother. “I’d take him to Rhodes Jordan Park or Rabbit Hill Park, and I’d read or exercise while he was fishing.”

Sanders is always willing to talk fishing, and he’s forever searching for a quality fishing hole.

“We sent a lot of pictures,” Sanders said with a chuckle.

Edmonds can attest to that.

“I’d hear them talking and laughing,” she said. “Deion would send a picture, then Travis would send him one.”

Edmonds taught her two oldest sons — Travis and Trayvis — to be independent, so they learned to cook, do laundry and clean up the house as youngsters.

She liked Sanders’ straightforward approach to life and football.

“Deion is exactly what he needs,” Edmonds said. “You want someone who will pour into your child — not just in football but in life. When you have someone guiding you off the field, that’s real.”

Still, Hunter is at Jackson State to be an elite football player.

When you have a player with as much hype as Hunter has received, it can be hard to match it. But for the five-star recruit, it’s been no problem.

He has the work ethic coaches love and teammates respect. He has talent that makes coaches drool and teammates envious. And he’s already gone viral for making a diving, one-handed interception at the goal line in practice.

“The kid wants to be great,” Sanders said. “He wants to work. He likes to work.

“One of our first practices, he didn’t run full speed to chase the ball, so I told him about it. That’s it. One time. He’s been sprinting to the ball ever since.”

Hunter said he knows Sanders is an old-school coach who doesn’t allow earrings in the facility and says being 15 minutes early to meetings is on time.

“He caught me loafing one time. He told me not to do it again or I wasn’t going to be on the field,” Hunter said. “I just manned up and stopped loafing. 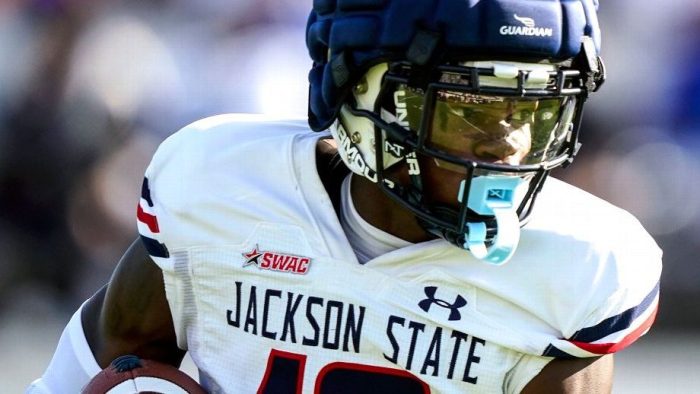 During one of Hunter’s first practices, each of Jackson State’s top receivers called him out. Kevin Coleman, the seventh-ranked receiver in the ESPN Top 300, was one of the players. They met at Florida State, which was recruiting each of them. When Hunter flipped to Jackson State, Coleman decided to join him. He had also been considering USC, Miami and Oregon.

“I felt like he made an uncomfortable move, even though he was comfortable with it,” Coleman said. “So I wanted him to know he wasn’t alone. I felt like God was telling me to come be part of something special with your brother. Don’t leave him hanging. I wanted to let him know he’s not alone.”

“He got all of them,” defensive coordinator Dennis Thurman said with a laugh. “He’s competitive. He’s tough. He don’t care. He’s a dawg. If he loses one rep, he’s going right back up there the next time.”

And it doesn’t matter whether we’re talking offense or defense.

“He’ll lock down a receiver,” said tight ends coach Michael Pollock, “then play receiver and beat the defensive backs he was just with.”

Hunter showed exactly what he can do by dominating JSU’s blue and white spring game with a 25-yard reverse, touchdown receptions of 9 and 80 yards, and a pair of interceptions.

“I was going to save him for Miami, but this ain’t about me,” Sanders said of allowing Hunter to play both ways. “This is about him and getting him comfortable in the role he’s going to have and letting him do his thing. It don’t matter if FAMU knows, they still have to deal with him.”

So will every other team on JSU’s schedule.