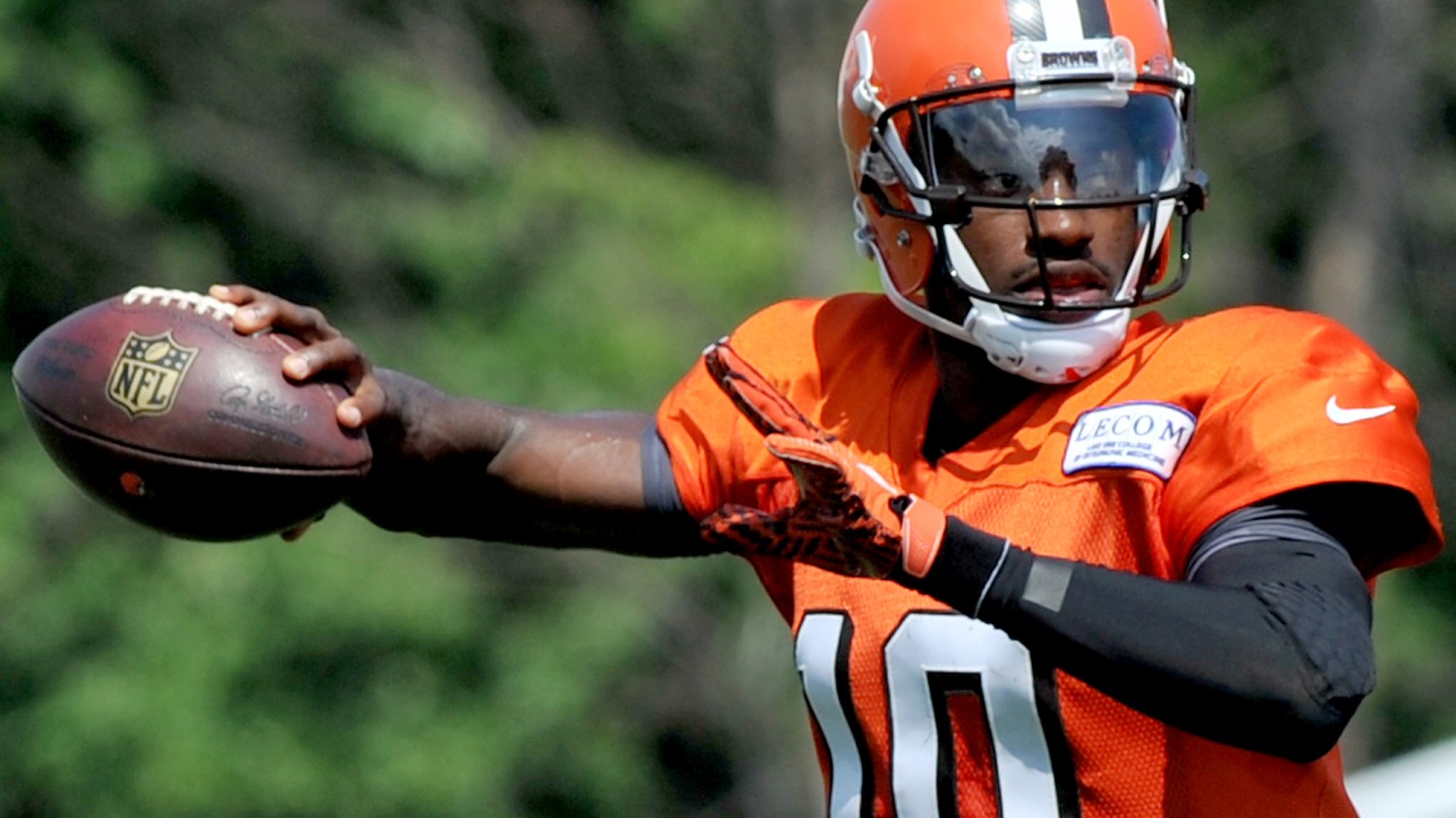 Listen to coach Hue Jackson long enough, and you start to believe that Robert Griffin III is the right quarterback for the Cleveland Browns. And as Jackson spoke glowingly about Griffin after practice here the other day, one thing became clear: If Griffin fails again, he’ll have no more excuses.

On Monday, the Browns named the former Heisman Trophy winner their starting quarterback. He had been competing with Josh McCown, but it was a one-horse race.

At training camp just a week ago, Jackson caught himself before giving Griffin a full-throated endorsement (“I’m happy with the progress all the guys are making, so we’ll just have to see,” Jackson said), but there were flashing, neon signs pointed at Griffin. In Jackson, Griffin has a powerful advocate. The Browns’ new boss sees something in the former star – and Jackson just may be the right guy to get Griffin’s best again.

“He’s a player,” Jackson said. “He just needs to be in the right environment with the right people. And here is where he is.”

Griffin’s attempt to reignite his career has entered a key phase. With the baby-step period of the offseason over, the Browns are preparing for their first preseason game Aug. 12 against the Green Bay Packers. No player in Browns camp is under the microscope more than Griffin, who will have to deliver in the pocket as well as the locker room to justify Jackson’s faith in him.

Wowed by Griffin during his private workout with the Browns on March 24, Jackson pushed for the club to sign the second overall pick in the 2012 draft, whom the Washington Redskins released March 7. Jackson’s bona fides as a judge of quarterback talent are unquestioned – just ask former students Joe Flacco and Andy Dalton – so the Browns gave their first-year leader what he wanted. Then, Jackson began to rebuild Griffin on the field and in the classroom. It’s an ongoing process.

“We’ve thrown a lot at him,” Jackson said. “He’s done whatever we’ve asked him to do.”

At this point, Griffin has no choice. After his spectacular start and unprecedented fall in four seasons with Washington, Griffin, at only 26, could be making his last stand in the NFL. In Washington, Griffin privately complained his coaches didn’t have his back. Fortunately for Griffin, Jackson decided to stand with him.

“The obstacles that are placed before you, that you face in the league, only build your character,” Griffin told reporters who cover the team. “I’ve had the opportunity to face a lot of obstacles in the [first] four years of my career.

“They have helped build me up and allowed me to handle any situation. Every time I step out here, I’m not really worried about what I’ve been through. I know that I can see the game through Hue’s eyes … and that’s all that matters.”

When Jackson looks at Griffin, he sees a young passer who can make all the throws and possesses the straight-ahead speed of a championship sprinter. That’s the guy who was selected the 2012 NFL offensive rookie of the year. Jackson can work with someone like that.

At one point, Griffin definitely could. However, Griffin became such a divisive presence in the Redskins organization that two head coaches essentially told ownership the team wouldn’t win as long as he remained on the roster. Jackson doesn’t want to hear it.

For Jackson, Griffin arrived in Cleveland with a blank slate. Griffin has been a good student, and “he’s growing. He’s getting better,” Jackson said. “Are there things that he still needs to get better at? Yes. But every quarterback does.

But so far, Griffin, who has taken every first-team rep since he joined the club, hasn’t exactly dazzled. Griffin continues to hold the ball too long as he cycles through his progressions, which was among his biggest problems in Washington. He’s still capable of making impressive plays – he displayed nice touch on a back-shoulder fade in a recent practice – but it’s about consistency.

Despite being healthy last season, Griffin didn’t appear in a game. In 2014, Griffin sat out seven games. When a passer misses 23 of 32 games and is learning a new offense, growing pains are to be expected. On the other hand, the clock is ticking. It’s all about consistency.

“Go out there, execute it the way they [the coaching staff] want it to be executed,” Griffin said. “Play the game freely and let your natural skills show.”

To help Griffin, the Browns’ offensive line will have to be much better than it was in 2015. Only the Tennessee Titans (54) allowed more sacks than the Browns (53). From 2012-14, Griffin was sacked on over 8 percent of his dropbacks – the highest rate in the NFL, according to ESPN Stats & Information.

“It’s not just about Robert,” Jackson said. “It’s about everyone on our football team. That’s the only way it works.”

True. But as Jackson knows better than most, it all starts with the quarterback. In Griffin, Jackson thinks he has the right one. The time has come for Griffin to prove it.