Oklahoma City Thunder guard Chris Paul’s CP Family Foundation has been making efforts to level the playing for students of color in the sports and entertainment industries. Now, it is bringing attention to an underrepresented major at North Carolina A&T State University.

In a just-announced partnership, Paul, Live Nation Urban and the foundation will begin a summer internship program in the university’s College of Business and Economics (COBE) tied to a business of sports and entertainment class.

“Access through education helps level the playing field and true leadership comes from knowledge,” said Paul. “I’m looking forward to expanding the partnership with A&T and Live Nation Urban and seeing the future results of our efforts.”

According to the foundation, the internship has been in discussion since December.

“The conversation started back in December with Live Nation Urban to bring resources to the table to enhance the class in some way,” said Carmen Wilson, project manager at the CP Family Foundation.

Making waves! 🙌🙌🙌 So great to see how Chris Paul 🏀 continues to use his star power for good, and I’m honored to play a small part in what he is building. We’ve come a long way from the @HarvardHBS #BEMS class in 2016! 🤩 I can’t wait to find out how my cases are received at @ncatsuaggies — and to see the students develop into entertainment industry moguls. 😁 Thank you, @cp3, @goodcarma17, @livenation, NCAT’s leadership and faculty, and everyone else who’s working hard behind the scenes to make this possible! 🙏😍💯 #allhustlenohassleisgoingtobemymottofromnowon #thiswillonlymakesenseifyouswipetotheend 😉

“Ironically, one of the gentlemen that came to the class, by the name of Marcus Allen, actually went to A&T and lived in Greensboro, so he was able to identify with the kids. But Shawn Gee is the person who made it all come to life, basically, immediately saying that he wanted to provide internships for the students who were specifically interested in the field of sports, entertainment and media.”

The internship will expose students to aspects of the live music industry that they may not get otherwise. They will be learning marketing, sales, promotion, staging, booking and logistics.

They are to work on the fulfillment of building out live concerts and events throughout the summer with Live Nation either in Washington, Los Angeles and North Carolina.

“We are excited to partner with Chris Paul and North Carolina A&T to offer this great opportunity to their students,” said Gee, president of Live Nation Urban. “One of my goals for Live Nation Urban has always been to introduce young African American future executives to the live music industry. We are disproportionately underrepresented in this space, and it will take programs like these and partners like Chris and N.C. A&T to help change that narrative.”

“There’s such a pool of talent at our university, especially in regard to creatives who want to work in entertainment and music. I think oftentimes our institutions are overlooked and not priority when it comes to pipeline programs.” – Tre Ingram, senior multimedia major

The implementation of this internship was highly anticipated by students and staff at A&T, said Kevin L. James, the dean of business and economics.

“We obviously looked forward to it with anticipation,” James said. “We [the staff] were very excited about it, the students were very excited about it and we got a lot of inquiries about it. But it was just the anticipation of working through the details and being able to make it happen, but we always had confidence that it was going to happen [because of] the relationship that we had established with the CP Foundation, particularly dating back to our event we had back in September. At that point, we knew that we had solidified the relationship and that everything was going to unfold well, it was just anticipation of putting all the pieces together and making it actually happen.”

In September, Paul brought a master class to N.C. A&T that was to serve as an introduction to the course that is now at the school.

Students in this spring semester class find it to be a wonderful experience.

Cameron Dinkins, a senior multimedia student, says it is exciting because it gives her a holistic view of the sports and entertainment businesses.

“I believe the work I’ve done in this class will help me as I start my journey through these industries,” she said.

Tre Ingram, a senior multimedia student and student activities board president, believes that what the foundation is doing is bringing attention to a body of students who do not typically get a chance to be recognized.

“There’s such a pool of talent at our university, especially in regard to creatives who want to work in entertainment and music,” Ingram said. “I think oftentimes our institutions are overlooked and not priority when it comes to pipeline programs. I’m really excited to see where this goes. To me, it’s also a win because it’s nice to see students be given an opportunity in varying majors that we don’t normally see.”

N.C. A&T is known to be a STEM (science, technology, engineering, and mathematics) school, mainly because of its accomplishments, alumni and research.

“I think what it says is that we’re definitely strong in the STEM areas and we’re known for the STEM areas, but we are not just a STEM school,” said James. “It says that we have other areas, other parts of the college that have very strong programming and that we are a comprehensive university and that there is going to be a tremendous value to you as a student or as an employer coming in and interacting with all parts of A&T.” 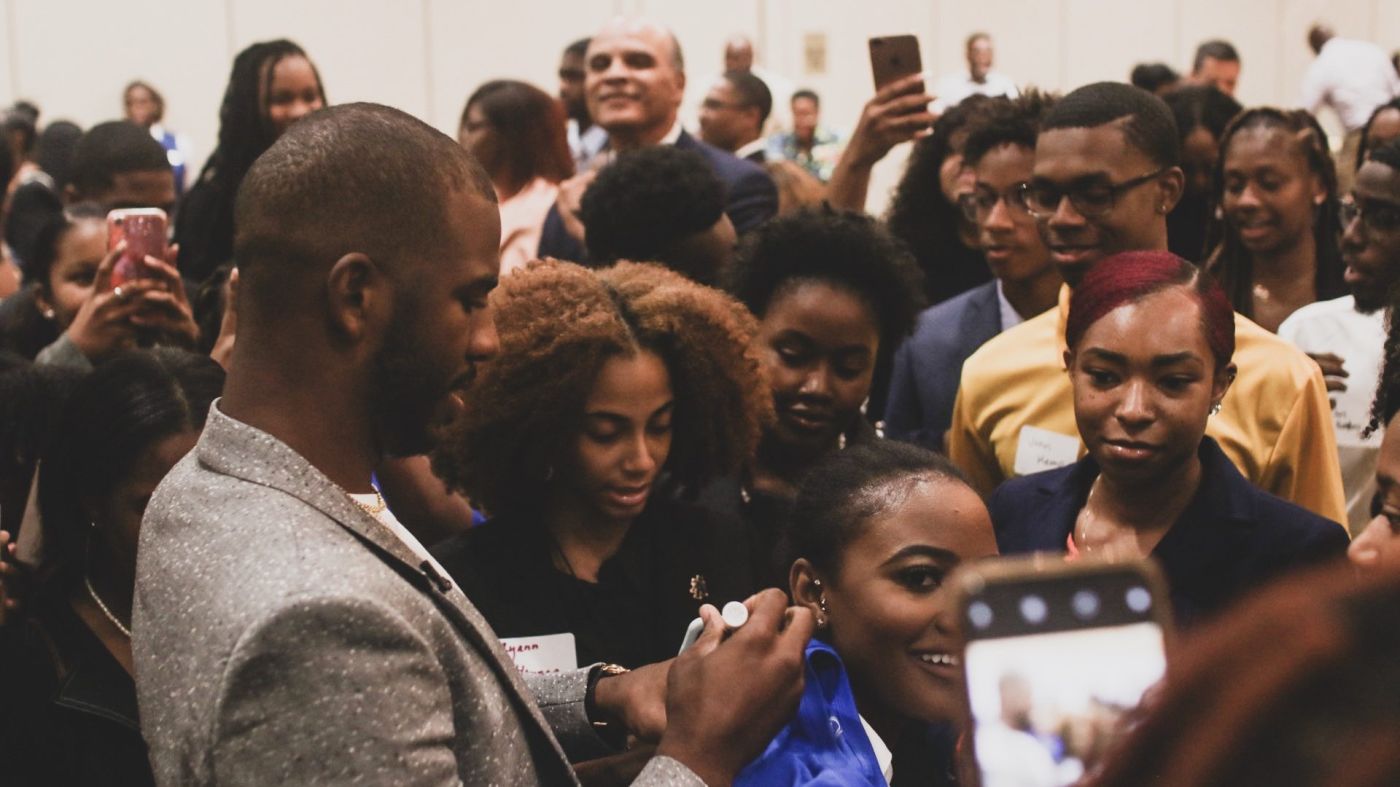 Sydney Lawson, a senior finance student, believes that this is a rare opportunity at COBE.

The business of sports and entertainment class is the only course of its kind in COBE, so adding the internship further enhances its value.

“We finally get the chance to take a course that interests a lot of us,” Lawson said. “One of the concerns I’ve had with A&T during my time here was the fact that sports internships or sports classes were never offered in COBE.

“We take so many finance, accounting, and marketing courses, but they never really cared to offer courses that fit students’ needs. I think a lot of times people fail to realize that sports would be nonexistent without the business side. This class really offers the perspective I’ve been waiting for, the sports side of business, and entertainment, of course.”

Allen, an A&T alum and co-founder of the Broccoli City Festival explained why he believes this internship is important for students of color and A&T specifically.

“Well, I’m a graduate of A&T, meaning that I’m an Aggie first,” Allen said. “And, two, I feel that there’s a need and there’s a void in live entertainment/sports behind the scenes for people of color/African Americans, so I feel it just makes sense, you know. You’ve got to leverage your resources.”

Allen believes that having an opportunity like this at a historically black university is huge within itself. He explains that most kids of color do not even get the opportunity to be at music festivals, much less work at them. Besides, he said, there are certain aspects of the entertainment industry that you will not understand unless you are exposed to them.

“There’s three levels to it. There’s what you see as consumer. There’s what you see as maybe an influencer or a talent who’s able to see behind the scenes on the surface. Then there’s being able to be behind the scenes on the staff and know where things are not going right and areas where you’re trying to clean up mistakes and understand how to handle those things on the fly and how you can have a plan and how that plan can go out of the window and how do you regroup and there’s a lot of things you just can’t see without seeing it,” Allen said. “It’s just impossible.

“You just can’t describe it, you don’t know how to plan for it and the only thing that you can do in those instances is take scenarios that have happened around your team and figure out and utilize experience to make decisions, so I feel it’s important to get that experience to be able to pull from in future situations.”

The internship along with the class itself give students the opportunities to receive an insight into real situations that occur in the sports and entertainment industry.

“The questions that our professors ask really make you think deeper than I even thought to while researching my case study,” Lawson said.

“A lot of times I leave class annoyed because I feel like my whole case study got thrown out the window because I didn’t think hard enough. A good annoyance, though. I like being challenged to think about things I’ve never thought of before.”

The students and staff also appreciate the foundation for not only the opportunity but the genuine motives behind it.

“Yeah, one thing that has come through clearly is their passion for developing students,” James said.

“For some people, doing something like this could just be a PR move, doing something to kind of get your name out and have people associate their name in a positive way. That doesn’t seem like the case at all. He [Paul] and all the people around him have a true heart to help students grow and have opportunities and that has seemed very clear and his family that is involved. His mom and dad came and visited the class this week and they came and talked to me about what they experienced.”

“If you take a look at his companies and business ventures, they are all ran by family and close friends. That’s amazing, if you really think about it. To be able to keep the family close,” Lawson said.

The foundation has more to offer to this course and historically black colleges and universities in the future.

“We also have some other opportunities we’re bringing to the class to enhance it,” Wilson said.

“The students are going to take a tour of the Charlotte Hornets offices to understand better more how an organization is run. We have speakers coming in to actually engage with them just so that they have a better understanding of the industry.”

Overall, the foundation hopes the course will create a pipeline that will turn into jobs for students as they matriculate through college. They have this hope for not just the students at A&T but other historically black colleges and universities.

“Obviously this is a pilot,” Wilson said. “However, we are looking forward to next year’s extension of the class in the fall, but then our goal is to scale it to other universities moving forward, to add a new university every year.”