In Providence, a ‘down payment’ on reparations brings a glimmer of hope

PROVIDENCE, R.I. – Ten million dollars’ worth of reparations are headed toward residents of this New England city. But on a recent Friday night, change felt 10 million miles away to residents in a Black neighborhood that has never recovered from being chopped in half by an interstate highway.

“We’ve talked about it for years. Reparations, reparations, reparations. I’m a person where, hey, listen, deliver. Delivery is everything,” said Kenny Phillips, co-owner of the 148 Pavillion Bar & Lounge, a low-slung cinderblock building in South Providence near the Thurbers Avenue Curve, where northbound Interstate 95 bends left toward downtown.

“I don’t think it will ever happen,” Bertha Araujo, 67, said on her way out of the bar.

But once they heard more about the details of Providence’s plan to fund an array of programs aimed at closing the racial wealth and equity gap, there was optimism. “As long as it’s helping someone in the Black community, I’m for it,” Araujo said.

My own emotions followed a similar trajectory as I traveled to Rhode Island’s capital to report on the city’s place in a growing movement for reparations. Providence’s plan has no new cash payouts, doesn’t limit eligibility to Black residents, and duplicates some ongoing services. Some people wouldn’t even call it reparations. But as I spoke to citizens and city officials, my initial resistance melted away. 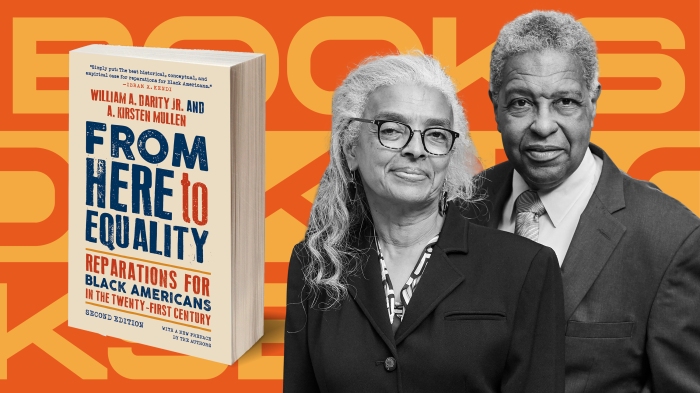 Yes, this is a drop in the bucket of what’s needed to repair the damage done by slavery and discrimination. Ten million dollars wouldn’t even begin to restore the neighborhood around 148 Pavillion, which is a block from the interstate that was built in the 1950s. The highway eradicated schools, parks, commercial districts and homes in Black neighborhoods, and blocked access to downtown and the waterfront. That created decay, which was compounded by governmental “urban renewal” policies that led to demolition or abandonment of many buildings.

But the architects of Providence’s plan have something in mind beyond this $10 million. They want to familiarize the public with the concept of repairing the harm of state-sponsored racism, which they hope will create momentum for more substantial restoration.

“When history looks at this period, they’re going to say this was when a movement started,” said Rodney Davis, chair of the city’s reparations commission.

“We’re looking at catalytic change. We recognize that we don’t have enough money to do that sort of ground-shaking change,” Davis said. “Ten million is like a small down payment on a house.”

Providence has 190,000 residents, 30% of them born in another country. The racial and ethnic breakdown is 44% Hispanic/Latino (including those people who identify their race as white), 33% white people who are not Hispanic, 16% Black, 8% multiracial and 6% Asian. Twenty-three percent of city residents live in poverty.

When the coronavirus pandemic struck in early 2020, Mayor Jorge O. Elorza formed an African American Ambassador Group to help create equal access to pandemic resources. After George Floyd was murdered while in police custody in May 2020, Elorza signed an executive order to create a “Truth, Reconciliation and Reparations” process assisted by the ambassadors. The city earmarked $10 million from money it received under the federal American Rescue Plan, which was broadly directed at pandemic relief.

The city then commissioned a report documenting the history of local racism against Black, Indigenous and other people of color. Next came a period of community engagement and reconciliation, which is intended to last in perpetuity. In February, the city created the reparations commission, which issued a report in August recommending an 11-point plan to help close “the racial wealth and equity gap between Providence residents and neighborhoods.”

During an interview in his City Hall office, Elorza told me all the proposals address needs described by Black residents and community leaders in town hall meetings, surveys, interviews and other events. “I think the radical thing we did was placing Black voices at the center of city policymaking,” the mayor said.

“I fully expect they’re soon going to see their ideas and recommendations come to life,” he said. “That’s like the beginning of the snowball effect.”

Since the $10 million comes from federal funds, using it exclusively to help Black people could be subject to legal challenge. Instead, to be eligible for help under the reparations plan, residents must fit one of several criteria. They must be Black or Indigenous, or reside in a “qualified census tract” neighborhood, which means at least 50% of households have income less than 60% of the area median. Residents also can be eligible if they live anywhere in the city and earn less than 50% of the area median income, with priority given to those earning less than 30%. Providence’s median household income is $49,065. 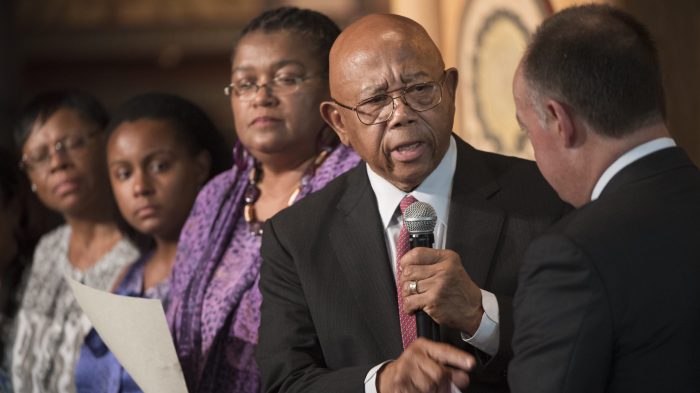 A budget request to authorize spending the $10 million was unanimously passed by the City Council Committee on Finance, and now must be approved by the whole council. Elorza’s office said they anticipate a positive vote by the end of October. Line items include $1.5 million for small business acceleration; $1 million each for a home repair fund, homeownership/financial literacy, and workforce training; and sums ranging from $50,000 to $500,000 for things like helping survivors and descendants of people impacted by urban renewal, an eviction legal defense fund, education scholarships, and developing a school curriculum based on the report about the history of local racism.

The commission decided not to recommend cash reparation payments. The budget does request $500,000 to expand the city’s Guaranteed Income Program, which provides monthly payments to extremely poor people of all races.

“This is not your traditional viewpoint of reparations,” Davis said. “And I’m OK with that.”

Dwayne Keys, a financial counselor and member of the reparations commission, said there was some community disappointment over the decision not to award cash payments, but he still believes this can begin real change. “I agree with the need for cash, as someone who provides expertise to Black and brown families with asset building,” Keys said. “But if the systemic practices, rules, guidelines, protocols, the way that we live or the way that we do things, if that is still oppressive, you still are not going to be able to move forward.

“You can have all the cash in the world, but if they’re still being racist, cash ain’t going to do it,” Keys said.

Much of the budget would augment things Providence is already doing. So what makes this “reparations”?

“The heart of it,” Elorza said, “is that Black voices have determined how these dollars are going to be invested. At a deep level, African Americans were given their freedom when slavery was abolished, but that freedom didn’t come with the ability and the power to determine your own fate. And we still haven’t gotten to that point. What we want to do is empower and give that sense of agency, that the Black community is indeed, through these dollars, determining the fate of the reparations process here in Providence.”

Many Black residents don’t know much about the plan. One was Julia Broome, owner of the downtown soul food restaurant Kin Southern Table + Bar. “My initial reaction was how are they going to do it. And how effective will it be? Who is it actually going to help? Is it going to benefit us?” she said.

So, I asked, your confidence in this actually happening is … ?

But the more we talked, the more she saw things that could help. Like assistance with homeownership and small businesses – two issues that cut deep for her personally.

Broome grew up on Warrington Street in South Providence with a single mother who tried to start her own hair salon and spa, but fell behind on her home mortgage as a result and lost their house when Broome was a freshman in college. That home’s value has appreciated in the 15 years since they lost it and could have provided a foundation of wealth for their family. Instead of cashing out her 401(k) to help launch her restaurant in March 2021, Broome might have been able to access home equity. 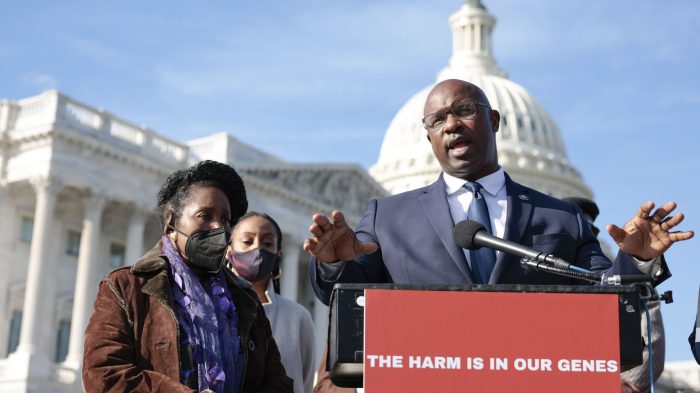 “I think it sounds good. I think it’s exciting,” Broome said near the end of our conversation. “Again, I would love to see how effectively this first $10 million goes. I just want to make sure it’s being put in our hands.”

Back at 148 Pavillion, I ran into Jim Vincent, a member of the reparations commission who is also president of the local NAACP chapter. He said the most promising part of the plan is how it may increase opportunities for homeownership. “That changes people’s lives more than anything, because most wealth for the average America is in your home,” he said. “You gain equity so you can finance your children’s higher education and those kinds of things that our white peers can do and we cannot.”

Phillips, the bar owner, also works for a mortgage company. He grew up in a housing project two blocks from his bar, and his working-class parents were able to scrape up the funds to help pay for college. He sees the scholarship piece of the reparations plan as crucial: “If these quote-unquote reparations are going to give kids an opportunity to get more than their parents did, I’m all for it. A lot of times cash in hand may not be the best thing. Education could be better than a true cash reparation.”

Elorza is set to leave office on Jan. 2, after serving the maximum of eight years. The future of reparations in Providence will be in the hands of the incoming mayor, Brett Smiley, who like Elorza is a Democrat. A Smiley spokesperson did not return a request for comment about his views about the future of the city’s reparations effort.

“Reparations has been a third-rail issue in politics for such a long time,” Elorza said. “I hope that what we’re doing is bringing reparations to the mainstream and making the case for why it needs to happen, along with how it can happen.

“We can’t write all the wrongs of the past in the city of Providence. Frankly, no city in the country has the means, the capacity to repay the debt that is owed to Black Americans.

“But what we can do is get the ball started.”