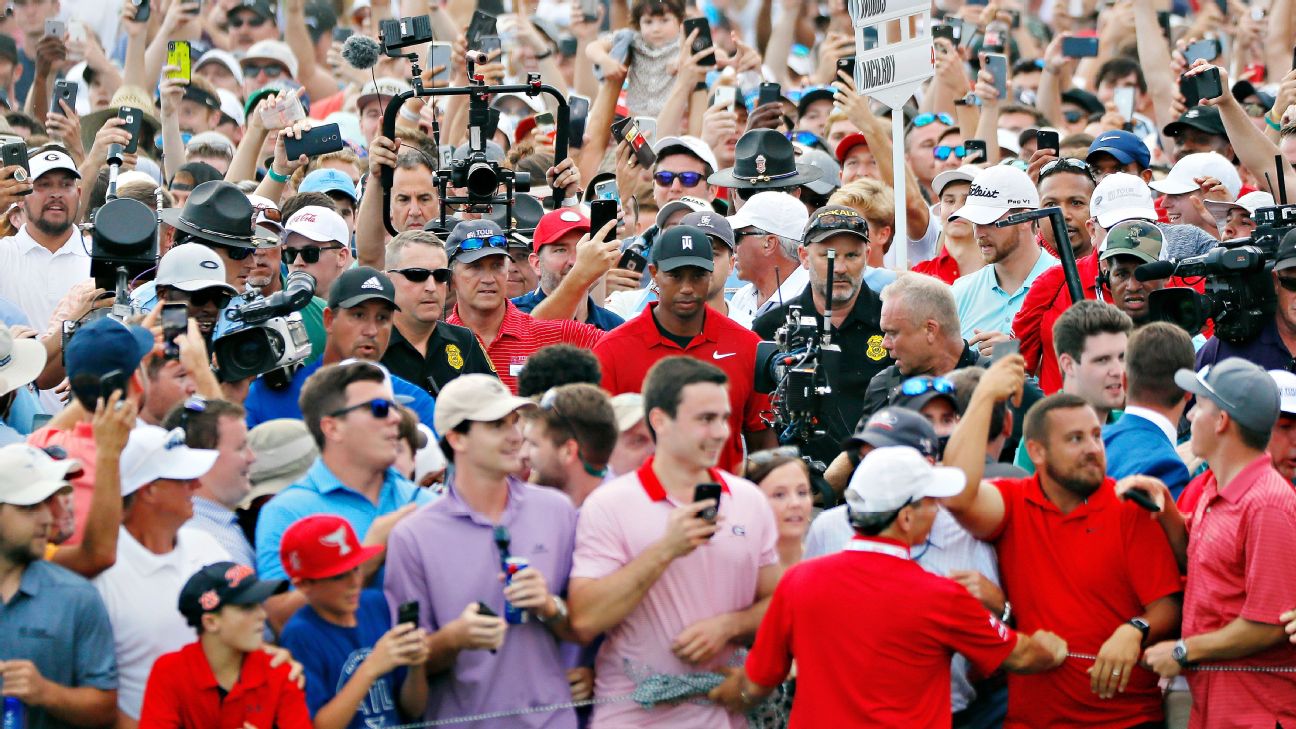 Tiger Woods of the United States is swarmed by fans as he walks to the 18th green during the final round of the Tour Championship at East Lake Golf Club on Sept. 23 in Atlanta. Kevin C. Cox/Getty Images
Commentary

In a nation divided, Tiger Woods serves as a rare unifier

Watching Tiger Woods emerge from the massive crowd that swarmed him as he approached the 18th green of Sunday’s Tour Championship event is one of the most memorable images you’ll ever see in sports.

But that doesn’t mean African-American fans who didn’t show up at the East Lake Golf Club in Atlanta to see the final round of the Tour Championship live didn’t care.

Terry Irving, who should have been excited to witness his Washington Redskins smacking around the Green Bay Packers from his seat in Section 130 on Sunday afternoon at FedEx Field, was constantly being diverted to the Tiger Woods updates appearing on his phone.

Russell Cannon Jr., who began his day at home in western Pennsylvania preparing to overdose on football, dumped the NFL for golf when he saw a “Tiger Woods in contention” news flash.

“I had to watch,” Cannon said. “I don’t play golf much, aside from the driving range. But Tiger was winning. I had to watch.”

Irving and Cannon are representative of more than a few sports fans of color who found themselves altering their weekend schedules to witness Woods’ first tournament win in five years.

“Yes, I rushed home to see Tiger,” said Irving. “I would never watch golf in the past. I only started due to Tiger and his popularity.”

Added Cannon: “Tiger’s emergence as a dominant figure changed my habit of watching golf. Seeing someone of my ethnicity playing so well at such a high level, it just gives African-Americans confidence that they can do anything they can set their minds to do.”

In a nation divided by politics and sports (with Colin Kaepernick and LeBron James often targeted), Woods somehow stands as somewhat of a unifier.

The proof: There are few individuals in this country who, over the course of four days, can elicit support from the president of the United States (on Sunday he tweeted: “Tiger is playing great. Looks like a big win could happen. Very exciting! @TigerWoods”) and Big Boi from OutKast, who followed Woods during his opening round Sept. 20:

Big Boi made the most of his first appearance @PlayoffFinale. 🙌 pic.twitter.com/XkXVdjtMyT

That the wide appeal for Woods from African-American fans appears to have remained high for the duration of his career is incredible considering he once infamously described himself as Cablinasian instead of black; he has never been romantically tied to an African-American woman; and he has recently generated criticism for failing to take a hard line against the president, with Woods explaining that “you have to respect the office” before ducking out on further questions.

“That bothers me, but long ago I learned to separate the professional athlete from the person they are off the field,” Tony Leake, who works in sports marketing, said of Woods’ affiliation with the president, which includes playing rounds of golf together. “While that affected how I saw him, it didn’t affect how I watched him. He was doing historic things, and he was can’t-miss TV.”

Irving, who was able to catch the final hole of Woods’ Tour Championship win after rushing home from the Redskins game, agrees. “I knew he wanted that mass appeal and money was his bottom line,” Irving said. “I respect his political views and choice of women, even though they aren’t mine.”

“Tiger has changed golf from an old, fat, out-of-shape game to a sport where you have to be fit,” Dutton said. “What he’s done for golf is amazing. It’s great to see him back in the hunt.”

The last time Woods won a golf tournament was back in 2013, the year South African president Nelson Mandela died, Robin Thicke reached his career peak as a relevant rhythm and blues crooner with his catchy hit “Blurred Lines” and the Miami Heat were winning a second straight NBA title.

Since that win, Woods endured four back surgeries that put in doubt whether he’d ever return as a golfer who could compete for championships.

With improved play for all of 2018 leading up to Sunday’s Tour Championship, his 80th PGA victory, Woods proved he was back.

And so are his fans, many of them African-Americans, who were doing just fine without the sport — until Sunday.