In 1946, pressure from Black citizens forced the Los Angeles Rams to desegregate

Yet, an unwritten gentlemen’s agreement still hovers over the city and NFL

LOS ANGELES — In March 1946, the Los Angeles Rams offered a contract to Kenny Washington to play pro football. In making the move, the Rams became ground zero for the reintegration of the National Football League.

The signing of Washington, a former UCLA star, and Woody Strode three months later ended a 13-year gentlemen’s agreement that banned Black players from NFL rosters. No document has been produced to prove the existence of such an agreement. The only proof is that from 1933 to 1946, no Black players set foot on an NFL field.

More than seven decades later, as the Rams prepare to play the Cincinnati Bengals in Super Bowl LVI, the league’s ambivalence over hiring African Americans as head coaches and executives continues. While the Rams celebrate their rich history that includes the signing of Washington and Strode, the reality is that the Rams were forced to desegregate. The pressure on the Rams was applied by Halley Harding, among others, a Los Angeles Sentinel sports reporter who led the media assault that ultimately compelled the team to do the right thing. 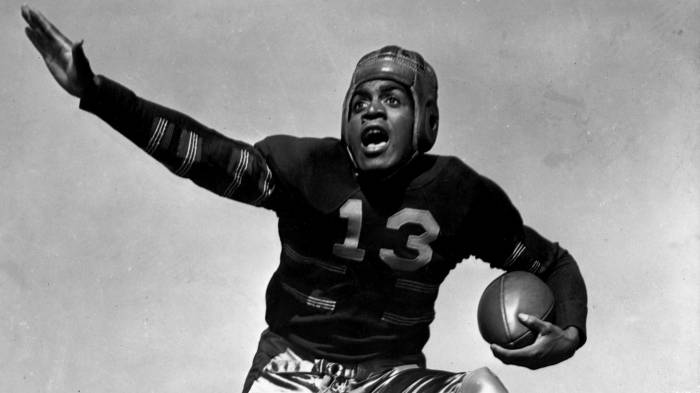 I was aware of the Black press’ role in pushing for desegregation. It was a role my mentor Sam Lacy of the Baltimore Afro-American emblazoned in my consciousness. Along with Wendell Smith of the Pittsburgh Courier and Joe Bostic of People’s Voice, Lacy pressured Major League Baseball to desegregate. Finally in 1945, Branch Rickey signed Jackie Robinson to a minor league baseball contract.

I was less familiar with Harding. Harding was a star quarterback at Wilberforce University. He played basketball for the Harlem Rens and baseball for the Indianapolis ABCs of the Negro Leagues. When he retired as an athlete, Harding worked for the Los Angeles Tribune and the Los Angeles Sentinel, where he became a powerful and consistent voice in pushing for the desegregation of the Rams.

In January 1946, Harding was among a number of Black newspaper reporters who met with the Los Angeles Memorial Coliseum Commission along with Rams executives. For Harding, the purpose of the meeting was to protest the NFL’s ban on Black players, and specifically to argue that neither the Rams nor the Los Angeles Dons of the All-America Conference should be permitted to lease the coliseum while refusing to hire Black players.

The Rams found themselves over a barrel. They had begun as the Cleveland Rams in the American Football League before switching to the NFL in 1937. The Rams won the NFL title in 1945, but did poorly at the gate, and decided that with the emergence of the Cleveland Browns of the All-America Football Conference, it was prudent to go west. In moving to Los Angeles in 1946, the Rams dramatically expanded the NFL’s reach and became the first major league sports franchise to move west. They also brought the NFL’s racist baggage with them. The Rams’ major stumbling block to a successful transition was convincing the Coliseum Commission — and the Black press — to allow the team to lease the coliseum. The Black press and the community for whom it spoke made it clear that if the Rams insisted on maintaining the NFL’s ban on Black players, the team would face a fierce fight.

“You had a thriving Black middle class looking for ways to effect change,” said Lonnie Bunch III, secretary of the Smithsonian Institution. “One way to do that was when the Rams came to town, to ask them how their presence would help Black folks.” Bunch is the founding director of the National Museum of African American History and Culture, the first curator of the California African American Museum and author of Black Angelenos: The Afro-American in Los Angeles 1850-1950. 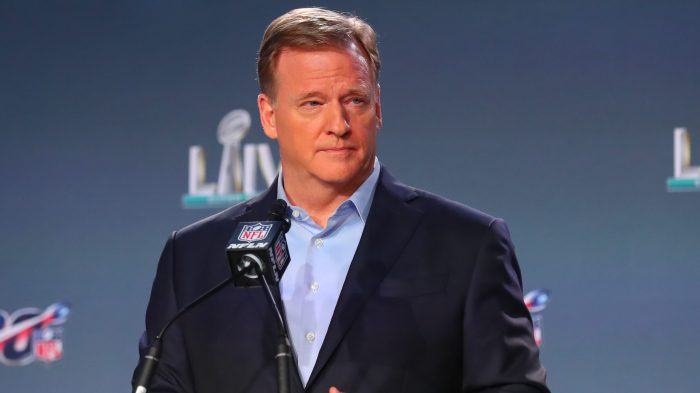 “There was a history of great Black athletes coming out of LA, which helps the Black community realize that these athletes can help their battle for civil rights,” said Bunch.

There are several accounts of the Jan. 14, 1946, meeting between the Black reporters and the Coliseum Commission. In his book Showdown: JFK and the Integration of the Washington Redskins, Thomas G. Smith said that Harding offered a convincing argument, tying the hypocrisy of African Americans fighting abroad and being denied rights at home — including the right to play professional football.

In exchange for Harding’s agreement to stop the campaign, the Rams finally agreed to hire Black players.

In March 1946, the Rams offered a contract to Washington, the former UCLA star. Three months later, the team offered a contract to Strode. Both players were well beyond their primes, and Washington had suffered severe knee injuries. By contrast, Browns head coach Paul Brown, without being pressured, offered contracts to Bill Willis and Marion Motley, both of whom were in their primes.

From the Rams and NFL’s perspective, the team and league had done their part. The Rams got what they needed — a place to play — and the NFL achieved desegregation, even if at a superficial level.

The reaction to the NFL’s hypocrisy was expressed by Wendell Smith in the Pittsburgh Courier. He called Brown his “Man of the Year” because he signed Motley and Willis voluntarily. Wendell Smith withheld praise from the Rams because they signed Washington and Strode only under duress.

The Rams’ integration story reaffirms a lesson about the NFL that we should have learned a long time ago: When it comes to treating African Americans fairly, the NFL does nothing without being forced to do so. This has been true at virtually every turn: in the 1930s when it banned Black players, in the 1940s when it readmitted them, in the 1950s when it enforced racial quotas and today when an expanding pool of qualified candidates faces an uphill climb to become head coaches and executives.

Even as the presence of Black NFL players has increased to nearly 70%, the only thing that can push multibillionaires who run the league to do the right thing for its own sake is to withhold something that money cannot buy: trust and the moral satisfaction that comes from that.

It might be a stretch to say that the Rams are third on the depth chart solely because of the team’s forced racial history. Indeed, the Rams have moved around. The team stayed in LA from 1946 to 1979, and began playing games in suburban Anaheim, California, in 1980. The Rams moved to St. Louis before the 1995 season, where they stayed until the end of the 2015 season. 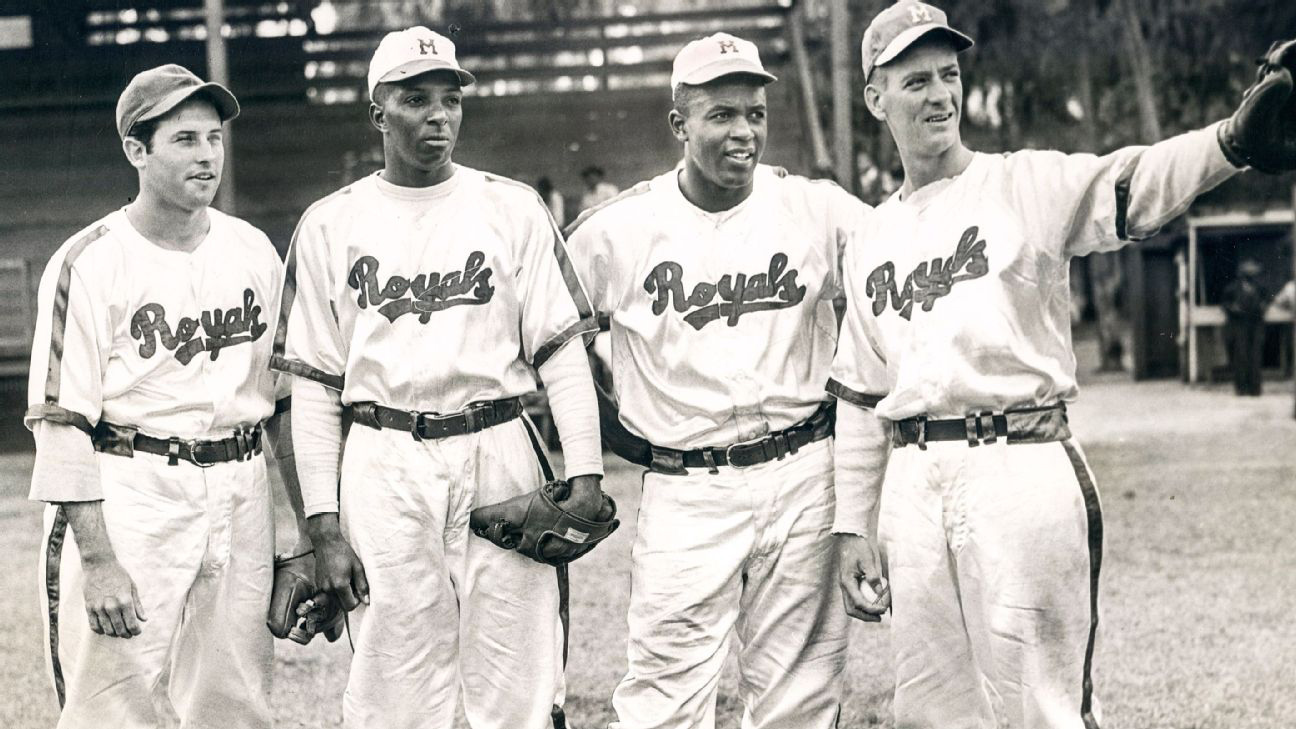 John Wright had the talent, but couldn’t follow Jackie Robinson to the DodgersRead now

“I think it’s because the Rams kept moving,” Hall of Fame quarterback Warren Moon said of the team being third in the local pecking order. Moon grew up in Los Angeles as a Rams fan but said he bleeds Dodgers blue and then Lakers blue and gold.

“When they moved to Anaheim, LA sort of dissociated itself with them because of that,” Moon said, referring to the Rams. “Then they moved all the way to St. Louis and were gone. Now they’re back, so they’re trying to regain that fan base they had many years ago.”

Still, there is the lingering, residual cloud of racism hanging over the NFL and the Rams, even as the Rams’ roster of Black players has exploded. The Rams remain one of 13 NFL teams that have never had an African American non-interim head coach. (The Buffalo Bills, New England Patriots, Baltimore Ravens, Tennessee Titans, Jacksonville Jaguars, Dallas Cowboys, Washington Commanders, New York Giants, New Orleans Saints, Atlanta Falcons, Carolina Panthers and Seattle Seahawks are the others.)

The Rams may have broken the NFL’s gentlemen’s agreement in 1946, but more than 75 years later, disturbing traces of that agreement remain.