Don’t look at my hair and judge my character

Every time I’m preparing to go on camera, I have to get it just right. It’s a hell of a process – washing it, combing it out, conditioning it, perfecting the texture, making sure it has symmetry – but it’s one that I’m willing to endure. My blowout fade is, after all, part of who I am. I haven’t trimmed it down since I was 15 years old, and I don’t intend to anytime soon.

A fatal mistake, according to some. I’d need more than just my 10 fingers to count the amount of times I’ve been told that mowing it down would be a requirement if I ever want to achieve my dream of becoming an on-air sports analyst. It’s more professional, they tell me. It’s the industry standard. I’m 19 now, and a sophomore journalism student at the University of Southern California, and I don’t buy that.

This idea doesn’t only present itself in television, either. Many Black men are familiar with the big chop – a difficult but necessary step toward the ever-elusive holy grail of maturity. Historically, the cutting of one’s high-top fade, Afro or dreadlocks has signified a readiness to buckle down, grow up and take on the responsibilities of adulthood. If you won’t take my word for it, just Google the words “Black professional.”

Nothing too flashy. That’s the idea, right? As Black men, we already run the risk of coming across as intimidating – by no fault of our own, of course. That’s the picture that American society has painted for us. Big, strong, aggressive, violent. Anything we do to add fuel to that fire, such as sporting an emphatic hairstyle, only works to our detriment.

As is often the case with society, the world of sports serves as a microcosm of how this operates. Look at a guy such as Cam Newton. Around the summer of 2019, he began growing out his now-trademark free-form dreadlocks. A bold new look, sure, but ultimately an inconsequential development as it related to his on-field play. Soon enough, however, after a stretch of bad performances, the question was being tossed around the sports commentary world: Is Cam Newton’s hair proof that he’s not serious about being a franchise QB?

Of course, this is a ridiculous idea. Newton’s hairstyle has about as much to do with his ability to throw a football as the socks he wears. But, that’s how society judges Black hair – as a representation of an individual’s character.

Black women in sports don’t escape from this level of scrutiny, though they do experience it in a different capacity. While their male counterparts are condemned for styles that might be viewed as too brash or outlandish, Black women face the hurdle of presentability – despite the fact that the very nature of athletic competition is contradictory to “looking pretty.” 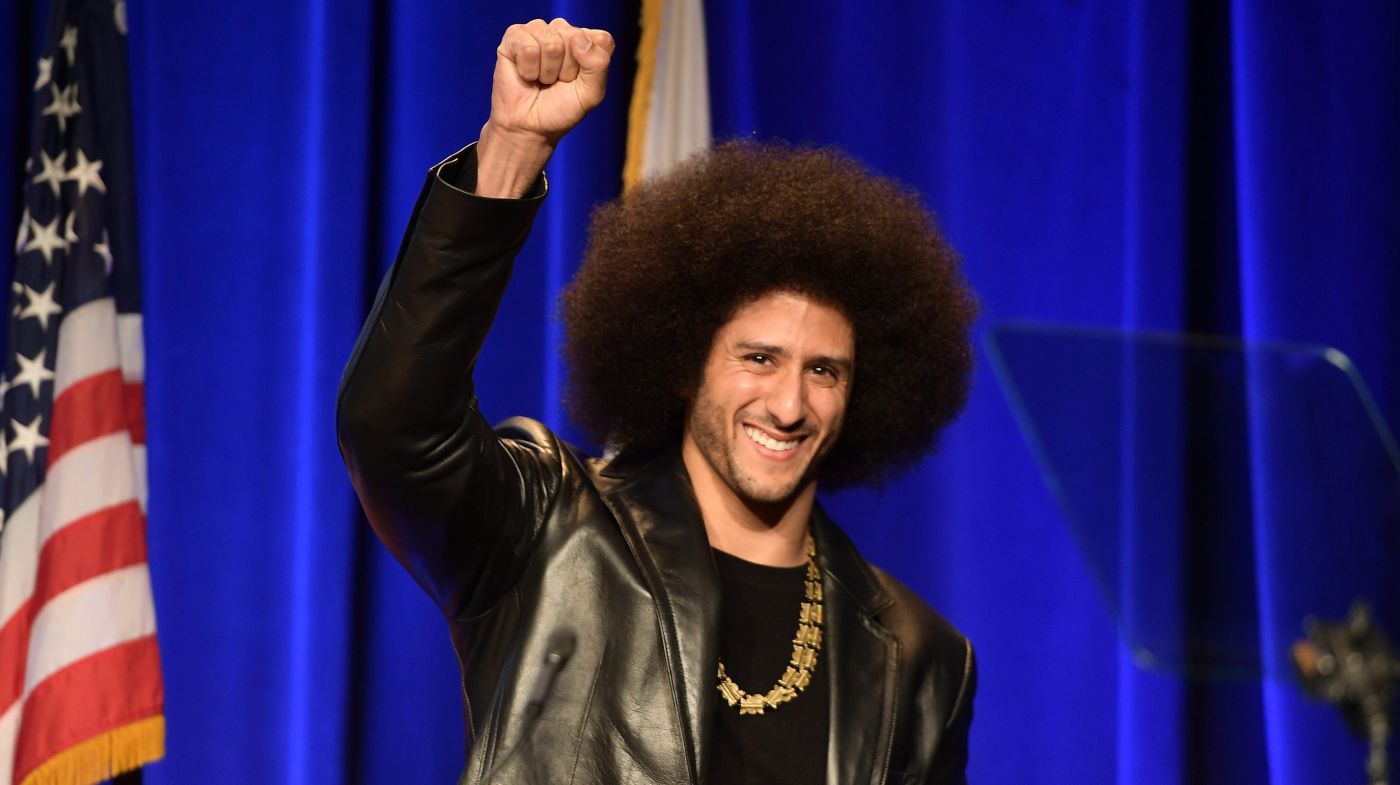 Kaepernick and the debate over the ‘authentic’ blackness Read now

Yet, somehow, we allow that to be their reality. Gabby Douglas, one of the greatest gymnasts of our time, was ridiculed during her 2012 and 2016 Olympic runs for uncombed hair and unlaid edges – as if the first Black woman to win the Olympic all-around championship didn’t have bigger fish to fry in those moments. The Williams sisters’ famous hair beads received their share of criticism. Venus once even receiving a penalty for having hers fall out during a match. Even sports journalist Jemele Hill, who makes many appearances across multiple media platforms, faces her struggles within the industry.

“I’ve been on shows where all they had was Axe Gel and Paul Mitchell, stuff we don’t put in our hair at all. I can tell no Black women have ever been in here based on the hair products that you have,” said Hill on Essence’s The Black Effect.

Those who don’t walk in the shoes of Black folks may wonder: Why would a simple hairstyle carry such great importance?

It must be understood that for so many Black people, it’s more than just a hairstyle. It is a source of self-confidence, a reason to look in the mirror and be proud of the individual meeting your gaze. In the face of a society that loves to exploit our culture and features, it is a symbol of the ownership of our bodies. It is a crown, a constant reminder of the fact that we are kings and queens despite living in a country that far too often treats us like peasants. There is a reason why barbershops and hair salons become staples in Black communities – they serve as havens of freedom in which people can congregate and strip the mask that they have to wear to get by in white America. There is a level of autonomy that we associate with these places, and with our hair.

For so many Black people, hair is one of the few things within their control – it represents something greater.

For Lonnie Walker IV, his free-form dreads symbolized something that he had power over. For Sanya Richards-Ross, her extensions were a source of self-assurance that gave her the confidence to shine on the brightest stage. For Colin Kaepernick, his Afro represented the growth of his consciousness.

Odell Beckham Jr. is another athlete whose hairstyle, iconic as it may be, was viewed as a manifestation of some character flaw. In Beckham’s particular case, he was considered by many to be a person more concerned with his image and celebrity status than his on-field play. After being traded to the Cleveland Browns, however, he famously cut off his blond locks, opting instead for a more conservative low fade. In a recent conversation with other NFL stars, he revealed that part of his motivation for making the change was to conform, to try and free himself from the “selfish” narrative imposed upon him. After yet another season of witnessing his name get dragged through the mud, however, Beckham’s blond look has returned.

“I’m tired of playing your game … I understand the game now,” he explained during the special. “That’s why you see the blond back, there’s nothing you can tell me.”

It must be understood that for so many Black people, it’s more than just a hairstyle. It is a source of self-confidence, a reason to look in the mirror and be proud of the individual meeting your gaze.

Beckham is tired of navigating the labyrinth of optics. So am I. So are a lot of African Americans.

Unapologetically Black. That phrase is being thrown around a lot nowadays, as its embodiment is viewed by many as the only way to tear down these negative stigmas associated with Blackness, such as one’s haircut. “Industry standards” and “professionalism” are concepts that far too often are coated in racism and prejudice, and the idea that a hairstyle is somehow an indictment of one’s character is an antiquated and ridiculous concept. We know what our hair means to us, and it’s time we began to reclaim ownership of it.

We are at the center of a moment in which the policing of Black people is being challenged like never before. However, let us not stop our social justice efforts at the law enforcement system. The “policing” of Black people, in all facets of our lives, has contributed to the disparity and injustice that exists today. When people acknowledge systemic racism as an issue, they must understand that covert policies and attitudes directed at African Americans are part of that broken system. White America should not get to define what an upstanding and successful Black person looks like.

If I ever cut my hair, it’ll be because I grew tired of running a pick through it – not because I want employers to see me in a certain light. If we want to get where we want to go as a people, as a country, it’s going to take a willingness by everyone to move past outdated perceptions regarding Black people. If we want to grow it out, lock it up, go natural or what have you, let it not be an indictment of our character, but a symbol of our humanity.

After all, it’s more than a hairstyle.

Reagan Griffin Jr. is a writer, podcaster and lover of all things sports and Blackness. Seeking truth, spreading joy and sharing love since 2001.