Kareem Abdul-Jabbar and Magic Johnson were polar opposites, but both were influential Black men in America

By Justin Tinsley @JustinTinsley
May 5, 2022

Much of the reaction to HBO’s Winning Time: The Rise of the Lakers Dynasty has focused on Jerry West’s threat of Supreme Court litigation or the way the fictionalized series denigrates the team’s female executives. But it’s the storyline about how the team’s two biggest stars approach Blackness that ultimately could decide the legacy of the show.

On the surface, Magic Johnson and Kareem Abdul-Jabbar (who has voiced his frustrations with the series) were polar opposites when their journey began together in the 1979-80 season. As the largely white media told it back then, Abdul-Jabbar was the combative superstar whose game was as unstoppable as his personality was uninviting. Johnson was the charismatic floor general whose game was as euphoric as his personality. 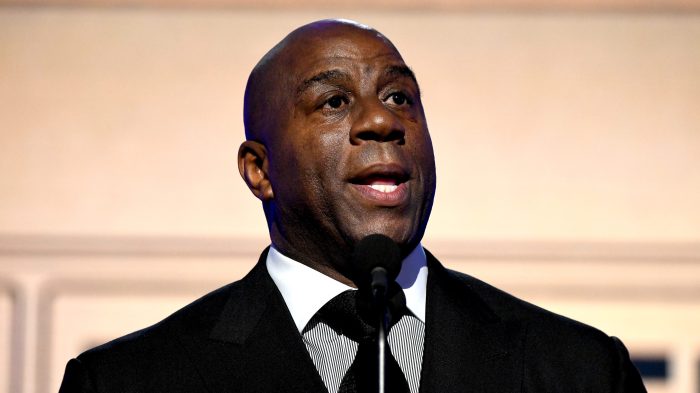 The 1980s was a decade that both changed and saved the NBA. It’s when entertainment was put on equal footing with execution, and no team is more responsible for that than the Los Angeles Lakers. But at the beginning of the decade, the league was on life support. The Finals were on tape delay. Drug usage among players was a major issue, a microcosm of a debate that would define and penalize an entire generation of families, with a disproportionate impact on Black folks. At the root of the discomfort, though — which, to Winning Time’s credit, it does acknowledge — was that white viewers weren’t comfortable watching a majority-Black league. More bluntly, they weren’t comfortable in a reality where white dominance wasn’t the norm.

How Johnson’s view of himself as a Black man in America evolved with his growing fame plays out poignantly in two scenes. The first portrays the team gathering at his family’s home in Michigan over the Christmas holidays, with the rookie, played by Quincy Isaiah, as the life of the party. Apart from the hubbub, Johnson’s father (Rob Morgan) and Abdul-Jabbar (Solomon Hughes) sit at the dining room table. Abdul-Jabbar asks the elder Johnson why his son smiles so much. As a Black man in America in 1979, he says, there wasn’t much to celebrate in a country that never truly valued his presence. The scene ends with Abdul-Jabbar promising the elder Johnson that he would look after his son and open his eyes to the world as it actually was for people who looked like them.

We don’t know how much of that scene actually happened. But this part is undeniably true: Where white America may have seen Abdul-Jabbar as antagonistic, to much of Black America, he was a prism.

“Growing up, my parents didn’t let us watch a lot of TV. But they would make exceptions for sporting events, particularly Lakers games. My dad just loved Kareem. They were the same age and my dad loved who he was as a person,” said Hughes. “My dad loved how Kareem resisted being forced into one facet of his being. He would talk about his intellectual interest, his political activism. What I remember my dad saying to us is, ‘If you’re gonna play sports, that’s the kind of person you wanna be like.’ ”

In the second scene, Richard Pryor (played by Mike Epps) approaches a table of Lakers and their dates. Epps, who for years has wanted to play the role of the comedy icon, nails Pryor’s blend of humor and introspection. 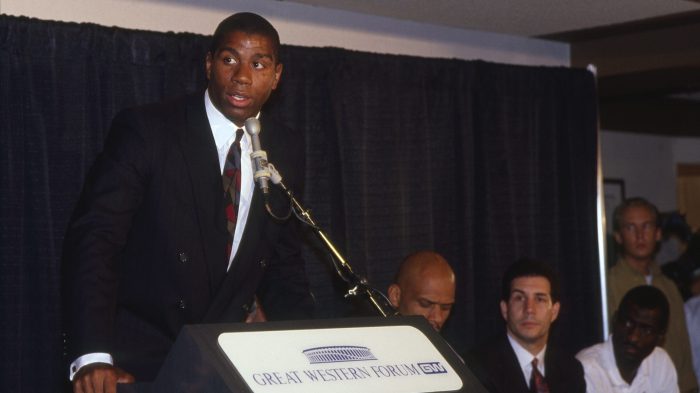 30 years after Magic’s diagnosis, a look at the intersection of hip-hop and the HIV/AIDS pandemicRead now

“You know all this fame s— ain’t natural,” Pryor tells Johnson in the scene. “That’s the problem. We ain’t born for it. And we ain’t made for it. And definitely ain’t made for that s— when it hit us. But you best believe everybody else is.”

As Abdul-Jabbar watches, legends in two different worlds continue their conversation. “They all hang around you like a mojo. They been waiting to pounce on your ass,” Pryor says. “What’s your real name, Magic? … Say presto to that mothaf—a. He’s gone. That’s the first cost of doing business with the white man.” 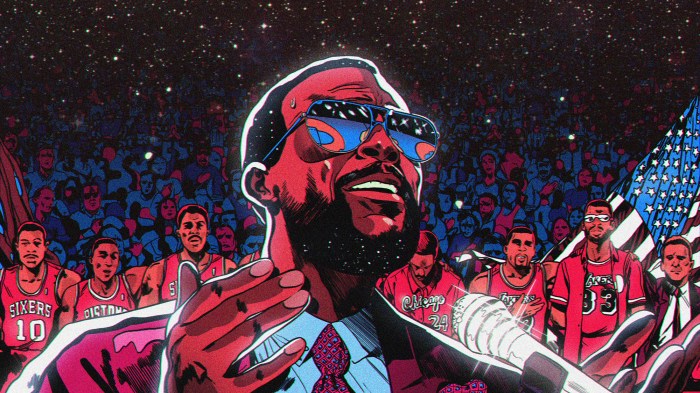 The players’ anthem: when Marvin Gaye sang ‘The Star-Spangled Banner’ at the 1983 All-Star GameRead now

How much the HBO series will delve into their relationship remains to be seen. Yet, it also feels disingenuous not to peel back the layers on one of the NBA’s definitive duos. (Johnson has his own documentary series, They Call Me Magic, currently streaming on Apple TV+. Another multipart documentary on the Lakers is tentatively scheduled to air this summer on Hulu.) In the 1980s, Johnson was one of the most popular Black men in America along with Eddie Murphy, Prince and Michael Jackson. Everyone loved Magic – outside of Boston. He was the epitome of excellence, swagger and dominance. And Abdul-Jabbar’s interests continued along the path charted by the college phenom at the Cleveland Summit who supported Muhammad Ali’s decision not to be inducted into the Army because of his opposition to the Vietnam War. 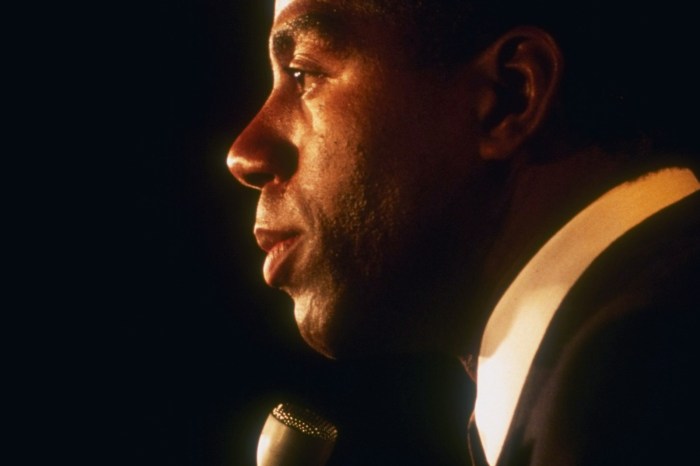 Though it isn’t mentioned in the series, Abdul-Jabbar and Johnson met long before they became teammates. Their original encounter was in 1970 when Johnson was 11 and he asked Abdul-Jabbar for his autograph following a Milwaukee Bucks-Detroit Pistons game. After they became teammates, it would take several seasons for them to become close off the court. They were just two different Black men trying not to intrude on the other’s world.

In the 1980s, they were opposites temperamentally. Years after their playing careers ended — Abdul-Jabbar by choice, and Johnson involuntarily — their interests in empowering the Black community began to meet in the middle. Johnson was a capitalist investing in businesses within Black communities and hiring residents to run them, while the Hall of Fame center was doing the work through activism. 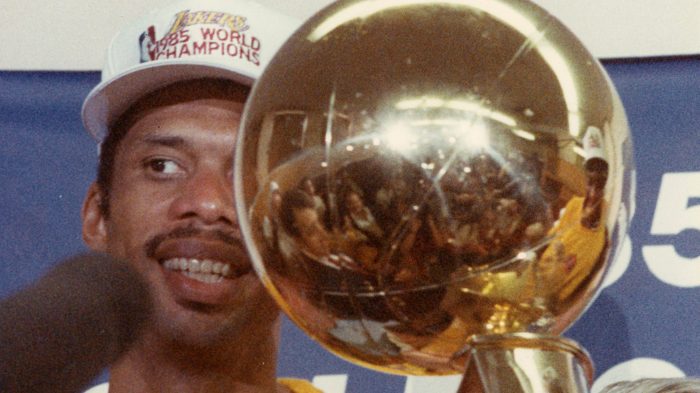 Kareem Abdul-Jabbar lets go of his past — and talks LeBron James, Eric Reid and his own legacyRead now

Now comes the challenge of how much the producers of Winning Time want to expose the reality that’s there for the taking. Black people have never been nor ever will be monolithic. Magic Johnson and Kareem Abdul-Jabbar are a direct reflection of this truth.

Despite the series’ admitted dramatization – and the drama it stirred up – how far it goes into the complexities of Black America matters deeply. Not from a basketball perspective. Basketball is the least interesting aspect of the series. What matters is portraying the essence of who Johnson and Abdul-Jabbar were then. And, more importantly, who they became.