How Eastern Kentucky’s roster leads the diversity push in baseball

The Black players on Eastern Kentucky’s baseball team are used to it by now. The comments come whether they’re on the field, on the road or walking around campus.

“I’ve heard fans point out our all-Black starting outfield, and that our first four batters in the lineup are Black,” said outfielder Cam Ridley.

“While walking on campus, I’m often asked if I play basketball,” said pitcher Louis Davenport. “And people are really surprised when I have baseball gear on.”

Harris, Ridley and Davenport are among 15 Black players on the 42-man Eastern Kentucky University baseball team roster, one of the most diverse Division I rosters, including some historically Black colleges and universities (HBCUs).

EKU’s roster is an anomaly in baseball.

“It’s the most diverse roster, meaning Black players, that I’ve ever competed against,” said Elton Pollock, head coach at Presbyterian College since 2004, the longest stretch for a Black coach not at an HBCU. “From my experience and general knowledge of college baseball, they have the most Black players of any Division I roster, with the exception of some HBCUs.”

The lack of Black players in Major League Baseball is well documented, but the numbers are just as low at the college level, where Black student-athletes comprise only 6% of all Division I baseball players, according to the NCAA. While that’s up from about 4% 20 years ago, the percentage has been unchanged for the past four years.

So, if the argument for the lack of Black players on the Division I level is that Black kids are simply not playing baseball in large numbers, then what explains EKU’s roster?

EKU is a mid-major in Richmond, Kentucky, where many of the 16,000 undergraduate students major in liberal arts, nursing or criminal justice. Led by president David McFaddin, EKU has made a conscious effort over the past few years to recruit more students of color — and student-athletes of color — with the help of the university’s division of diversity and inclusion, along with the assistance of several minority scholarships.

As a result, the number of undergraduate and graduate underrepresented minority students has increased from 10.7% in 2012 to 12.6% in 2019, according to EKU.

“Diversity and inclusion is not only the right thing to do,” said EKU athletic director Matt Roan, “but it makes us a better institution. And specifically in this case, a better baseball program.”

That’s what then-EKU athletic director Steve Lochmueller had in mind when he hired baseball coach Edwin Thompson in 2015. Outside of HBCUs, Thompson became only the third Black head coach in Division I baseball, joining Northwestern’s Spencer Allen and Pollock of Presbyterian College.

“I wanted to hire someone that could coach baseball and someone who could relate to today’s athletes,” said Lochmueller, who retired in 2019. “I immediately saw the mentor that he was, so hiring him was a no-brainer.”

Before Thompson arrived in Richmond, he was a pitching coach for three seasons at Georgia State. He was also an assistant coach at Duke (the first Black baseball coach in the Atlantic Coast Conference) and spent two years as head coach at Division III Bates College.

His recruitment of Black players also aligned with the type of roster he desired to field in the offense-dominant Ohio Valley Conference. He compared it to a football coach wanting a certain type of player to fit into a wide-open offensive scheme.

“We tried to recruit guys that could run, bunt and hit,” said Thompson, who played outfield at Howard, Maryland and Webber International in Florida. “We identified kids, Black and white, that can do that. We ultimately found success in that model, which had a little more of a blend of representation. 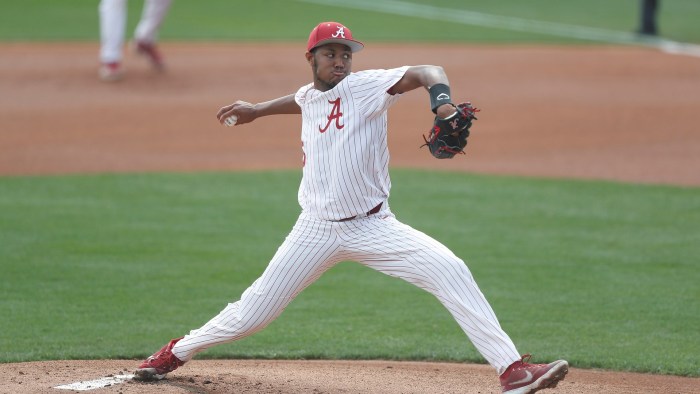 “If I don’t hire [Black] coaches, who’s going to hire them?” he added. “If I don’t recruit [Black] players, who will? You always have to worry about that as a Black coach because when you look around, you don’t see many people that look like you.”

Thompson’s collection of diverse talent led to success. EKU had consecutive 30-win seasons in 2019 and 2020 and advanced to two straight conference tournaments. It also had big wins against top programs, including last year’s defeat of No. 11 LSU.

Last year, EKU finished 12th in the nation in batting average (.314) and 15th in scoring (8.4 runs per game). The pitching staff also set school marks for strikeouts in a season for the third straight year.

“Coach Thompson opened EKU baseball to bring in a lot of young men of color,” Lochmueller said. “He built an excitement around baseball. He elevated the program, elevated the GPAs, and graduation rates, and beat national teams.”

But the not-so-secret to his success at EKU is available to every college program in the country: MLB’s Youth Program initiatives.

Reviving Baseball in Inner Cities was created by MLB in 1989 to help create baseball opportunities for youths in underserved communities. It grew from a local program in South Central Los Angeles to a campaign across the country.

From there, other programs were developed, such as the Play Ball initiative, which encourages kids to play the game outside of the traditionally organized leagues and tournaments, ranging from playing catch to stickball to whiffle ball. There’s also the Breakthrough Series, the Dream Series and the Elite Development Invitational where players can receive instruction and get the opportunity to perform before college and pro scouts.

EKU’s roster is an example of the diversity MLB’s programs promote throughout all levels of baseball.

Other initiatives include the Urban Youth Academies in cities such as Cincinnati; Compton, California; New Orleans; and Kansas City, Missouri. The Youth Academies provide instruction and development, especially for Black youths who may not get the opportunity to participate in baseball in their respective communities. Several of these programs include instruction from former Major League stars, such as Ken Griffey Jr., Andre Dawson, Eric Davis and Dave Parker.

“We’ve seen an influx of kids that are participating all over the country,” said Del Matthews, MLB’s vice president of baseball development. “I’m highly encouraged because I’m starting to hear from some college coaches on a consistent basis, who are reaching out to kids that we’ve been able to develop and showcase in our programs.”

Matthews, of course, hears from Thompson often and considers him an inspiration and advocate for young Black athletes.

Jerome Wright, the director of the Cincinnati Reds Youth Academy, also applauds the work Thompson has done and has seen positive changes throughout the game. Nine players from the Reds academy have signed to play college baseball on all levels for next fall, including pitcher Quinton Hall, who signed with EKU.

“If you look at an All-Star Futures Game roster [a team of minor league baseball prospects from the United States vs. a team from other countries], it isn’t the 8% you see on the major league level, it’s 30% or higher of African American participants,” Wright said.

“Major League Baseball and Del Matthews are pushing us forward.”

And Thompson, who’s now in his first season as head coach at Georgetown, hopes more forward-thinking will continue to improve the diversity on other Division I rosters.

“You have a choice on who you want to recruit,” Thompson said. “But, ultimately, the MLB events we chose to attend allowed us to have opportunities to recruit kids. For those that say the reason for the low numbers in Division I is because Black kids aren’t playing baseball, I don’t believe that. For instance, while at Eastern, I was the only D-I coach at a showcase in Cincinnati.

Baseball’s diversity conversation received national attention two years ago when baseball powers Vanderbilt and Michigan participated in the College World Series. Each of its rosters had several contributing Black players and players recruited from MLB’s programs.

Thompson said that may have opened the eyes of other top programs.

“I’m very optimistic because there’s definitely a good number of Black players that you’ll see on the D-I level over the next two to three years,” Thompson said. “And that’ll open up more opportunities for future coaches, future scouts, GMs and other positions in baseball.”

Although Thompson has departed EKU, its approach has not changed.

New head coach Chris Prothro, who is white, and assistant coach Walt Jones, who is Black, joined the school with similar philosophies about student diversity.

“Within five minutes of talking with the athletic director, it came up as far as what the makeup of the roster looked like and the strong expectation that it will continue,” said Prothro, a former assistant at South Alabama.

But the addition of Prothro has been a transition for the team, especially for players who came to EKU because of Thompson.

One of the grad assistants also mentioned to Prothro how it could be different for the Black players who no longer will have a Black head coach.

“My immediate reaction was that I needed to make sure those players understood that I’m in this with them,” Prothro said. “And if there are things I don’t understand [culturally], it’s on me to shut the [expletive] up and listen. I have to figure out how I can be the best coach for all of our players.”

Among the players, the team’s diversity has provided open discussions of social issues and race.

Harris, who leads the team with 46 hits, said some of the white and Black players had to make adjustments due to some cultural differences, and because many white players never had so many Black teammates.

“We don’t go off to the side to talk among ourselves about police shootings of unarmed Black men and women,” Harris said. “We’ll talk as a team in the locker room. Our discussions about George Floyd got real deep. [Some white players] asked us about these issues and we told them how this is a real thing for us and it happens. They learned how we see things.”

Which is sometimes painful.

“My parents never had a conversation with me on how to react to a cop [during a traffic stop],” said pitcher Darren Williams, who is white. “It was sad to hear from my teammates about these types of differences. It sucks that one of my best friends and teammates have to worry about something like that.” 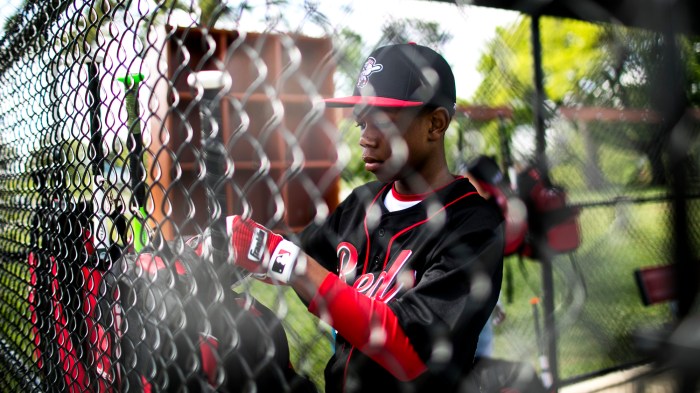 Urban Youth Academies get black players back in the gameRead now

EKU (13-25) has struggled on the field a year after Thompson’s departure. One of its most impressive games, however, was in a 6-4 loss at No. 2 Vanderbilt on April 13. And there is optimism for several EKU players who are pro prospects, including Harris, Davenport, Ridley, outfielder Kendal Ewell, pitcher Julian Jackson, outfielder/infielder Caleb Upshaw and infielder Charlie Ludwick.

Jones, who is the team’s recruiting coordinator, expects the team to bounce back, especially with the addition of several key recruits who will come from the same well routinely dipped by Thompson. He also acknowledges some of the pressure that comes with building their roster.

“We will continue to make our roster look the way we want it to,” said Jones, previously an associate head coach at Nicholls State. “But if we’re not winning games, then at some point somebody will probably tell us we don’t have a job anymore. So we’ve got to be smart in identifying players and make sure they’re capable of taking us to the next level.”

Matthews, the son of former MLB star Gary Matthews Sr., does not share Jones’ concern. This issue for Matthews is more than about winning.

“The victories are in the graduations and African American kids that gain an education by playing college baseball,” Matthews said. “There isn’t a drop-off in talent when you recruit a diverse program, just look at Vanderbilt, Michigan and others. Diverse teams are more reflective of our society, and it gives them an opportunity to learn and grow from the shared, common and different experiences of each other. We all win when this happens.”