Houston Rockets’ Gersson Rosas: ‘I want to see Latinos in every part of the NBA’

The NBA is celebrating its 13th annual Noches Éne•Bé•A (eh-nay-bay-ah — the Spanish pronunciation of NBA) in March to commemorate fans and players across Latin American and U.S. Hispanic communities. The festivities include players wearing celebratory warm-up shirts and 15 games with in-arena celebrations. Still, Latinos yearn for a bigger presence in the NBA.

The percentage of NBA players classified as Latino dipped from 4.9 percent in 2016-17 to 2.3 percent during the 2017-18 season, according to the Institute for Diversity and Ethics in Sports’ 2018 NBA Racial Gender and Report Card. There are no Latino owners. There is just one Latino head coach, the Charlotte Hornets’ James Borrego. And there is only one Latino who has the position of vice president of basketball operations, the Houston Rockets’ Gersson Rosas.

“It’s surprising,” Rosas told The Undefeated. “There’s not a lot of Latinos in executive positions or in front offices. And, hopefully, that number will grow. That’s one of the things that is important to me.”

Rosas, a native of Bogota, Colombia, has been with the Rockets for 16 seasons. During that time, he also had a three-month stint as general manager of the Dallas Mavericks in 2013 before returning to the Rockets in his current role. The right-hand man of Rockets general Daryl Morey, Rosas is involved in all player personnel moves. He was instrumental in the trading of Tracy McGrady for draft picks and assets that were later used to acquire James Harden. An American citizen, Rosas has also been the international player personnel scout for USA Basketball’s men’s national team since 2015.

Boston Celtics forward Al Horford, a Dominican Republic native, described Rosas as a role model for Latinos hoping to work in the NBA in an executive role.

“His impact has been real big,” Horford said. “I got a chance to spend time with him at Basketball Without Borders [in the Dominican Republic]. He’s always one of those guys pushing for the NBA to be more involved in Latin America. He wants to make sure the game will grow in our countries over there. That is always what I have gotten from him. He doesn’t only talk about it. He goes down there, does work and makes a difference.”

Rosas, 40, talked to The Undefeated about his career successes and the challenges and dream of getting more Latinos and Latinas into the NBA.

Why did your family move from Colombia to Houston?

Did you know English when you came here?

I did not know English. I learned like everybody else — with music, from TV and movies — but it was big culture shock coming from where Colombia was at that point in time. It was a rough period. Fortunately, it’s in a lot better place now, but it was during that time there were a lot of cartels. We weren’t in danger, but because of everything that was going on, you didn’t feel safe. You didn’t feel like you had an opportunity to expand, and my parents always wanted us to have a better life.

It’s disappointing because Colombia is beautiful. It went through a rough period, but fortunately it is where it’s at now, having gone through all that, and now they’re in a more stable place.

Where did your passion for basketball come from? (Editor’s note: Rosas played basketball in high school.)

When I was in high school, in 10th grade, I realized that my passion was to be in basketball, was to be a GM one day. I met my wife in high school, and she would ask me, ‘What do you want to do when you grow up?’ And I knew I wanted to be in the NBA and be a GM. And to her, she didn’t so much laugh as in shock, like, ‘What do you mean? Are you saying this to impress me? Or is this something that you really care about?’

And I think, from that early stage, I knew I had a lot of hurdles ahead of me, you know? Being Latino … you didn’t see [Latinos] in the people in the NBA. You didn’t see them playing.

Who was your mentor in basketball?

I was fortunate to be around a lot of good people. Being in Houston, at that time, [then-Rockets assistant general manager] Dennis Lindsey was my first mentor. And he really took me under his wing when I was finishing college and looking to start my career. He gave me my opportunity to be an intern with the Rockets and did even more than that. I still had those early questions of what my route’s going to be. And that gave me a lot of opportunity, a lot of experience in the internship.

And after being there for a couple of seasons, understanding the league, Dennis gave me the best advice. I had a couple seasons in the NBA with the Houston Rockets. But the reality was, I wasn’t ready and I didn’t know what I wanted to do. And he said, ‘Hey, you got to figure out if you want to scout. Do you want to coach? Go get on a team somewhere at any level and figure it out.’ 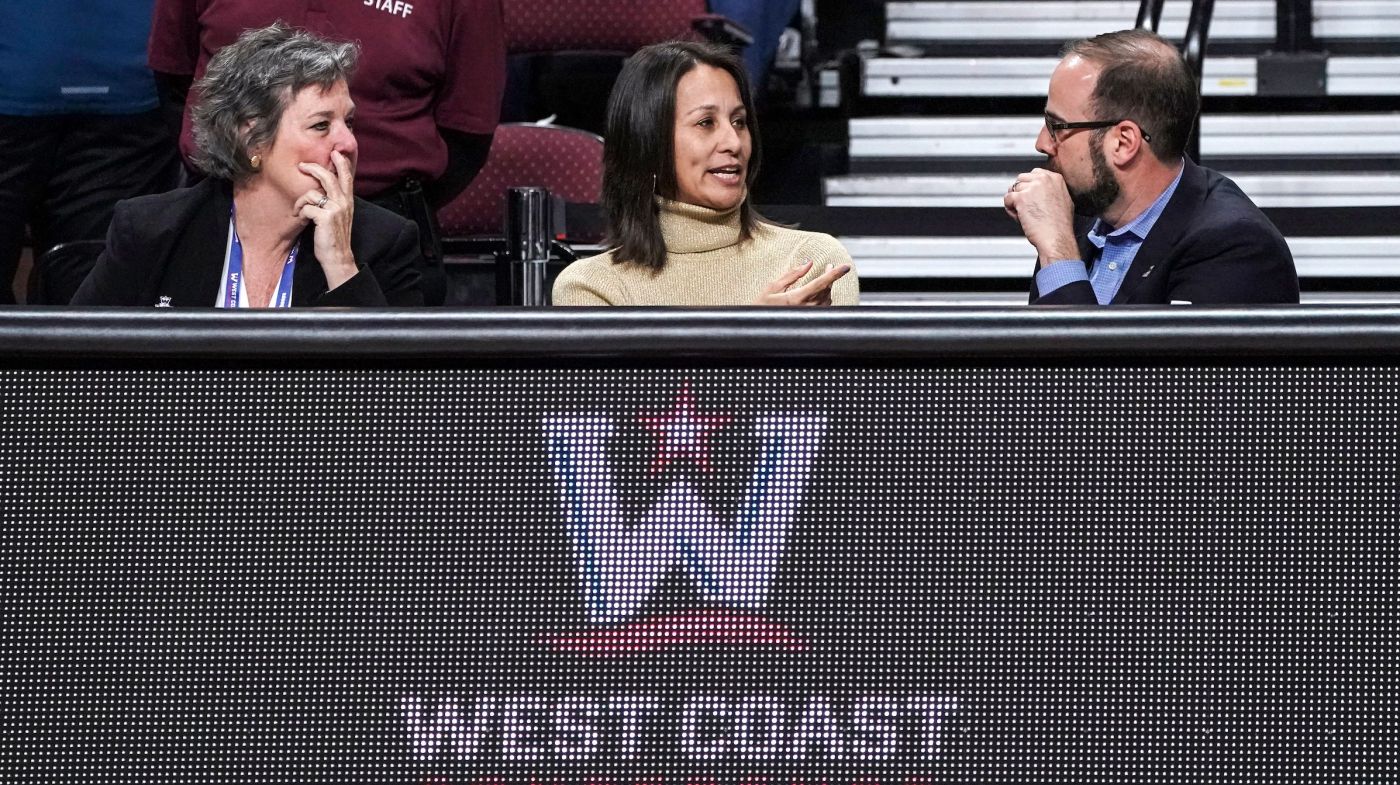 You ended up working for a couple years with the Venezuelan Basketball Federation and with Westbury Christian School’s basketball team in Houston before you answered Lindsey’s question about what you wanted to do. Do you remember what you told him?

I said, ‘Hey, my heart is in scouting. I want to be in the front office.’ And he said, ‘Well, good, because we got a front-office entry-level position for you if you want it.’ And for me, it was an experience that really set the foundation because I had worked so hard to get an opportunity to get involved in the industry. Now it was the opportunity to come in and have the opportunity to grow and develop in an organization with the Rockets.

While it was short-lived, how do you look back at your stint as general manager of the Mavericks?

It was huge. Not only for myself, but being the first Latino general manager in the NBA was very special to me. It’s something that I was passionate about doing at a very young age, but it was humbling because it’s not something that I did on my own.

What ultimately led to your departure?

I appreciate Mark Cuban and the Mavericks for the opportunity they gave me. After a few months with the organization, I realized it wasn’t the best fit and made the decision to resign my position.

What did you learn from your stint as a GM?

I felt like I learned and I grew. I grew a lot in that opportunity in terms of understanding the role, the league and different perspectives of responsibility. Even though it wasn’t the right fit, the experience and moving forward gave me the confidence to be able to do the job at a high level. The right opportunity will come at the right time.

How did you get a GM job again?

The organization we have, on the court and off the court, the philosophy that we have, we’re doing a lot of things here in Houston that the league values. I’ve been loyal to ownership here and to the general managers that I’ve worked with, the coaches that I work with. I feel like that experience is going to make my next experience as leader of an organization special.

And coming from a basketball background, being able to spend as much time as I have with Daryl, the analytic perspective, I want to marry all those perspectives, because it’s the same thing. It’s a diversity of opinion, diversity of approaches, diversity of process. In this day and age, that’s how you have success at the highest level in the NBA.

Can you talk about the challenge of finding the next GM opportunity?

What does the month of March, in which the NBA celebrates Latinos, mean to you?

It’s very significant. We are here in the U.S. We are in the NBA. But I’m an immigrant. I am a Colombian immigrant, and to have the opportunity to do what I do in the NBA, it’s very impactful, not just for myself but for what it means to Latinos everywhere. And there were strong people that have helped me, that have guided me, have directed me, have been mentors and friends. The privilege that I have to be here also gives me a responsibility to give back.

What is your dream for Latinos in the NBA?

To have more Latinos, give them an opportunity to grow and develop in this league, because the beauty of our league is the diversity of it. And not just in terms of background or culture, but it’s the mentality, the approaches. It’s not just done one way. The different perspective that you have in an organization, it’s the value of having the team on the court and team off the court.

Building that together is something I’m very passionate about. The reality is, the more perspectives you can get, the different opinions, you know, that’s what you can value. And I’m very blessed to be part of the league that really values that.