‘He’s a baller’: Spencer Dinwiddie continues to bet on himself with the Dallas Mavericks

SAN FRANCISCO – Dallas Mavericks fans likely became even bigger fans of newcomer Spencer Dinwiddie after he scored 30 points in a stunning rout of the Phoenix Suns on Sunday that vaulted the franchise to the NBA Western Conference finals. Dinwiddie, however, has moments where he is still trying to get used to his third team in two years, such as when he stumbled over the team’s nickname, #MFFL (Mavericks Fan For Life), while talking about fans at the American Airlines Center.

“Have the AAC and the MF … FL,” Dinwiddie said after the Mavs’ 123-90 blowout win. “Sorry, I’m new. I’m trying to get all the hashtags and all that right. Just get ready to show up and show out. We ready to represent the city like we have. We believe we’re not done yet. We have the mentality that we’re going to go win another series and keep advancing. We need you guys behind us.”

As Mavericks fans get more behind Dinwiddie on their quest to get back to the NBA Finals for the first time since winning the title in 2011, they will learn more about one of the more interesting players in the league. Not only is Dinwiddie a great scorer off the bench, but he is a man who marches to the beat of his own drum. He’s invested in non-fungible tokens (NFTs) and a blockchain and software development company.

“My parents always taught me I could be whatever I wanted to be, and I had confidence in myself,” Dinwiddie told Andscape. “I do things I believe in. So, when I’m making a decision, as long as I’m not going to hurt people of that nature, go for it. I operate on that belief.”

New Mavericks president Nico Harrison made the first big move of his tenure when he acquired Dinwiddie and forward Davis Bertans from the Washington Wizards for forward Kristaps Porzingis and a protected second-round draft pick on Feb. 10. Dinwiddie gave the Mavs a scoring boost mostly off the bench, averaging 15.8 points, 3.9 assists, 3.1 rebounds and 40.4% shooting from 3-point range in 23 games. The seven-year NBA veteran also nailed two buzzer-beating, game-winning 3-pointers for Dallas this season. 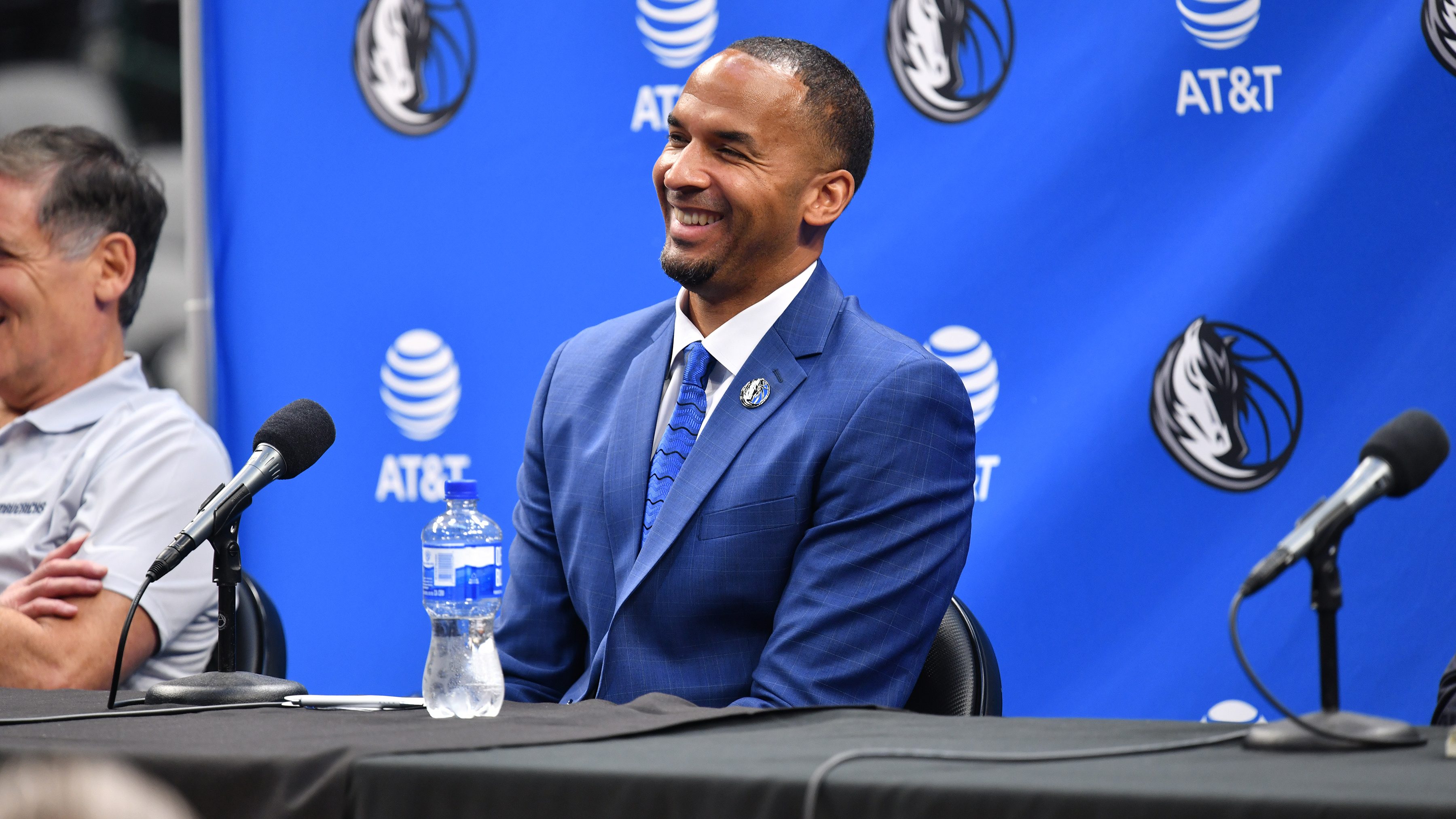 Dinwiddie didn’t have a notable performance in this postseason until he scored 30 points and nailed five 3-pointers in 25 minutes off the bench against the Suns in Game 7. Dallas is certainly hoping to see more of that against the Golden State Warriors in the Western Conference finals, as the 6-foot-5, 215-pounder averaged 20.5 points against them in the regular season.

“He is amazing with the ball,” Mavericks All-Star Luka Dončić said. “He can do a lot of things. He’s a baller. That’s the best way to describe him. We’re glad to have him.”

Said Warriors guard Stephen Curry: “He has the game … I’m sure he’s excited about his new start in Dallas.”

Dinwiddie was ranked as the 93rd best player in the nation by ESPN 100 in 2011 when he graduated from William Howard Taft High School in the Los Angeles suburb of Woodland Hills, California. He had an opportunity to play basketball for Harvard University, where success off the court was all but guaranteed after graduation. But with big NBA dreams, he opted to go to the Pac-12 and play for the University of Colorado instead.

Dinwiddie’s dream did come true, as he was drafted by the Detroit Pistons with the 38th pick in the second round of the 2014 NBA draft despite his junior season ending prematurely due to a torn ACL.

“That confidence in myself is how I got to the NBA,” Dinwiddie said. “There is a difference between Harvard and Colorado. With Harvard, I could’ve had a nice job and made a safe couple hundred thousand. But I wanted to play in the Pac-12 and play in the NBA. That is the story of my life. I take risks with things and people and put my own into it.”

One intriguing risk Dinwiddie tried to make came in 2019 when he planned to go public with a “$SD8” token offered through his company DREAM Fan Shares that would enable investors to buy into the then-Brooklyn Nets guard’s three-year, $34.4 million contract. The selling of the shares would allow Dinwiddie to give investors a chance to make money off a potential greater contract after the second year of his deal by purchasing tokenized security that could pay off if he played well.

The NBA, however, nixed the opportunity. In a New York Times story, the league said in a statement: “According to recent reports, Spencer Dinwiddie intends to sell investors a ‘tokenized security’ that will be backed by his player contract. The described arrangement is prohibited by the CBA, which provides that ‘no player shall assign or otherwise transfer to any third party his right to receive compensation from the team under his uniform player contract.’ ” 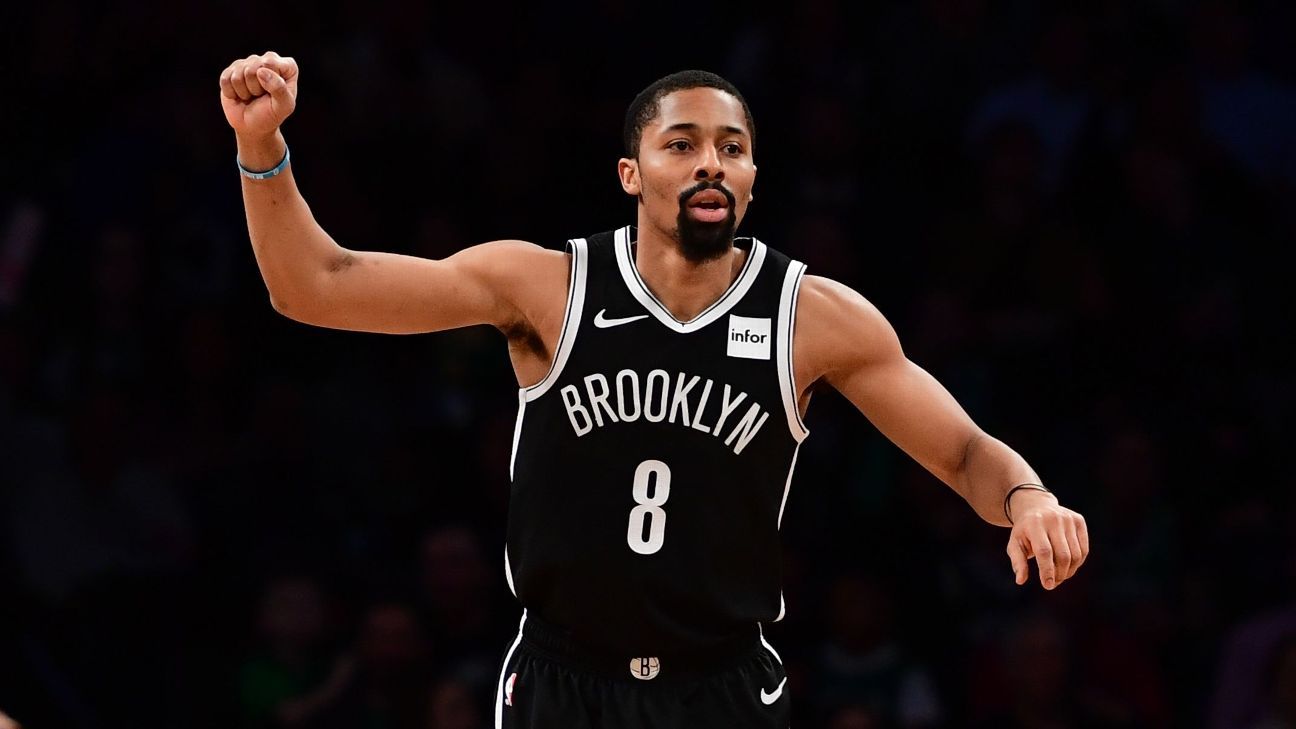 How investing $150K in an NBA player would actually workRead now

In March 2020, Dinwiddie also launched a blockchain-backed digital token called Calaxy, short for “creator galaxy,” which was a platform for community engagement around a new generation of influencers and creators via a mobile app. He attempted to purchase the Wizards’ jersey patch before this season to advertise the cryptocurrency company Calaxy for $12 million. The NBA wouldn’t allow him to do that either.

“I’ve always been attracted to unique things,” Dinwiddie said. “In 2017, I was with Brooklyn, and I was looking at other sectors whether it be VC [venture capital] funds, tech specialties or tech focuses. I had a conversation with a finance buddy, and we talked about bitcoin. I rode the rise up and the crash down and it sparked me to learn about the space.”

Dinwiddie did find off-the-court success connected to the NBA in August 2020 as he and fellow NBA players Andre Iguodala, JaVale McGee, Aaron Gordon and Garrett Temple led a $12 million funding round for Dapper Labs. Dapper Labs is a Vancouver, British Columbia, blockchain and software development company that develops blockchain-based products and services, including video games.

Dapper Labs developed games such as NBA Top Shot, which allows users to buy, sell and collect NBA NFTs that showcase influential “Moments” minted on its FLOW blockchain. NBA Top Shot earned more than $700 million in total sales in less than a year, according to CEO Roham Gharegozlou in May 2021. Dapper Labs was named one of the 50 most innovative companies in the world and the No. 1 gaming company in 2022 by Fast Company.

“When you try to do stuff that’s new, and the NBA is a legacy business with a lot of billionaires, chairmen and different bodies that are fearful of stuff like that,” Dinwiddie said. “So, I understand it. I didn’t really take it personal. I know how this goes with big business. But now that they’re starting to understand technology and the benefits to them, they’re in crypto space and trying to find things that benefit them. I caught some residual benefits off of it. I was an early Dapper Labs and FLOW investor.”

Dinwiddie signed a three-year, $62 million contract last year as part of his sign-and-trade deal that sent him from the Nets to the Wizards. It included some interesting bonuses that are also paying off now.

Dinwiddie netted a $100,000 bonus by the Mavs making it to the second round of the playoffs, and another $571,427 bonus for advancing to the Western Conference finals, according to ESPN’s Bobby Marks. He will make an additional $400,000 bonus if Dallas advances to the NBA Finals, and oddly a mere $1 more if they win a championship. Dinwiddie also netted a $1.5 million bonus for games played this season.

“Being on the Wizards, it was unlikely that we were going to the Finals,” Dinwiddie said. “That is probably why I did [$1]. There was a pot of money that they had to break down and most of it was broken down between the others, making the playoffs, making the conference semis, making the Finals. It was designed to get me as much money as possible, but it ended up being funny. Now I am paying attention to it because now it is realistic.”

All that is standing in the way of Dinwiddie receiving another big bonus is Golden State. The Mavericks were 3-1 against the Warriors during the regular season. But Dinwiddie isn’t attaching too much merit to those games and has a lot of respect for a Warriors franchise making its sixth conference finals appearance since 2015.

Even so, the new Mavericks guard who has lived off of believing in himself is confident that his team will land another upset.

“I don’t think they were fully healthy when we played them,” Dinwiddie said. “This is playoff basketball and they’re one of the most historic teams of all time. Their nucleus is still intact. [Warriors guard] Jordan Poole is playing amazing. So, we’re going to have our work cut out for us. I’m looking forward to going to the Bay.

“This is the Western Conference finals. This is what you dream of. We didn’t put a ceiling on our head when we entered the playoffs. We’re not going to do that now. I don’t think anyone picked us to win this series. I don’t know what they’re going to say about the next one. Maybe we will have a couple more fans. That doesn’t shake our focus. We believe and want to win another series.”