The Miami Heat announced Thursday that they will donate the proceeds from sales of Black Lives Matter-inspired team apparel to three local nonprofit organizations working toward the betterment of Black people in South Florida.

Starting Thursday, the Heat will sell six shirt designs through their website and team stores that include social justice messages such as “Enough is Enough,” “Silence is Compliance” and “Love Black People the Way You Love Black Culture.” 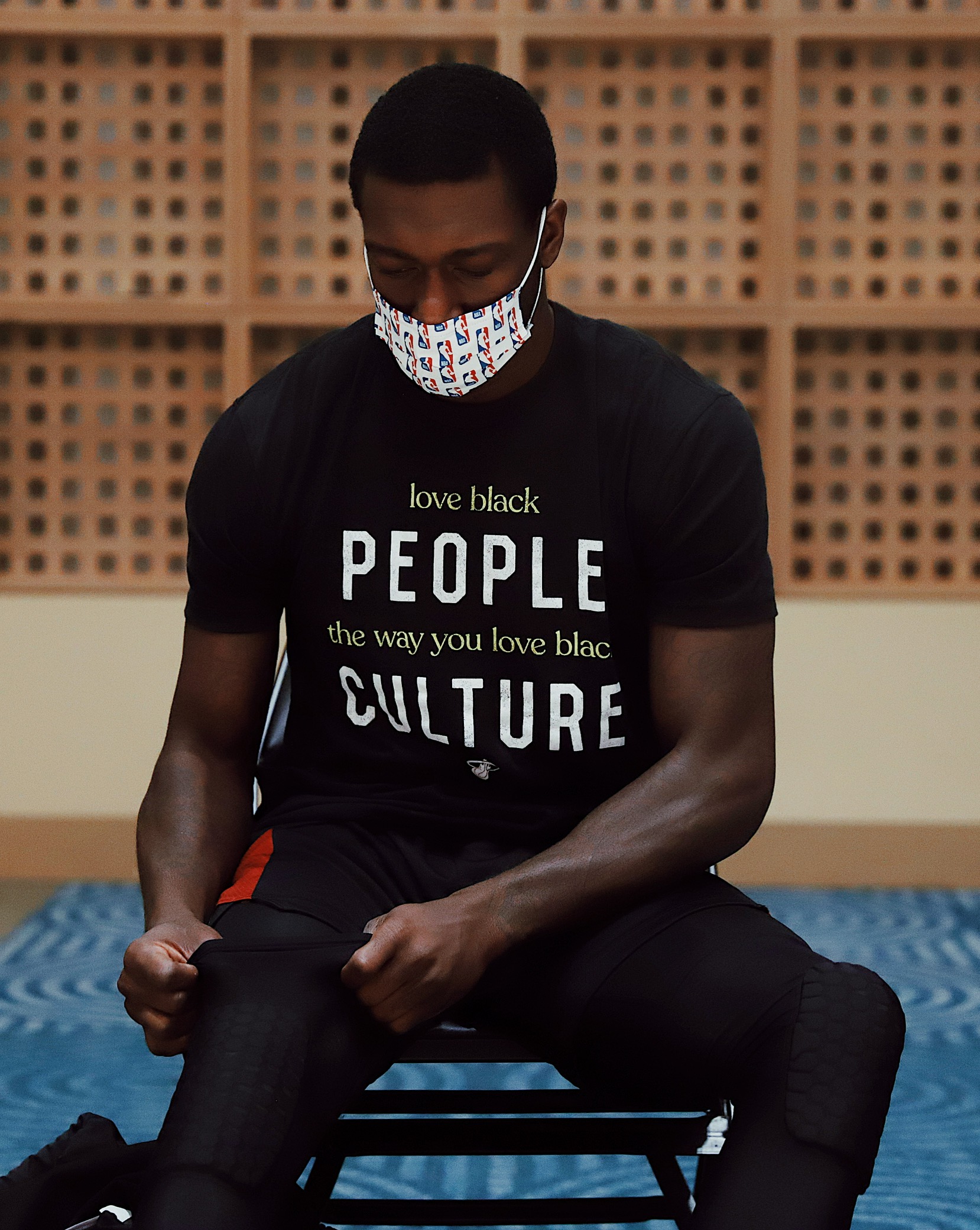 Images courtesy of the Miami Heat 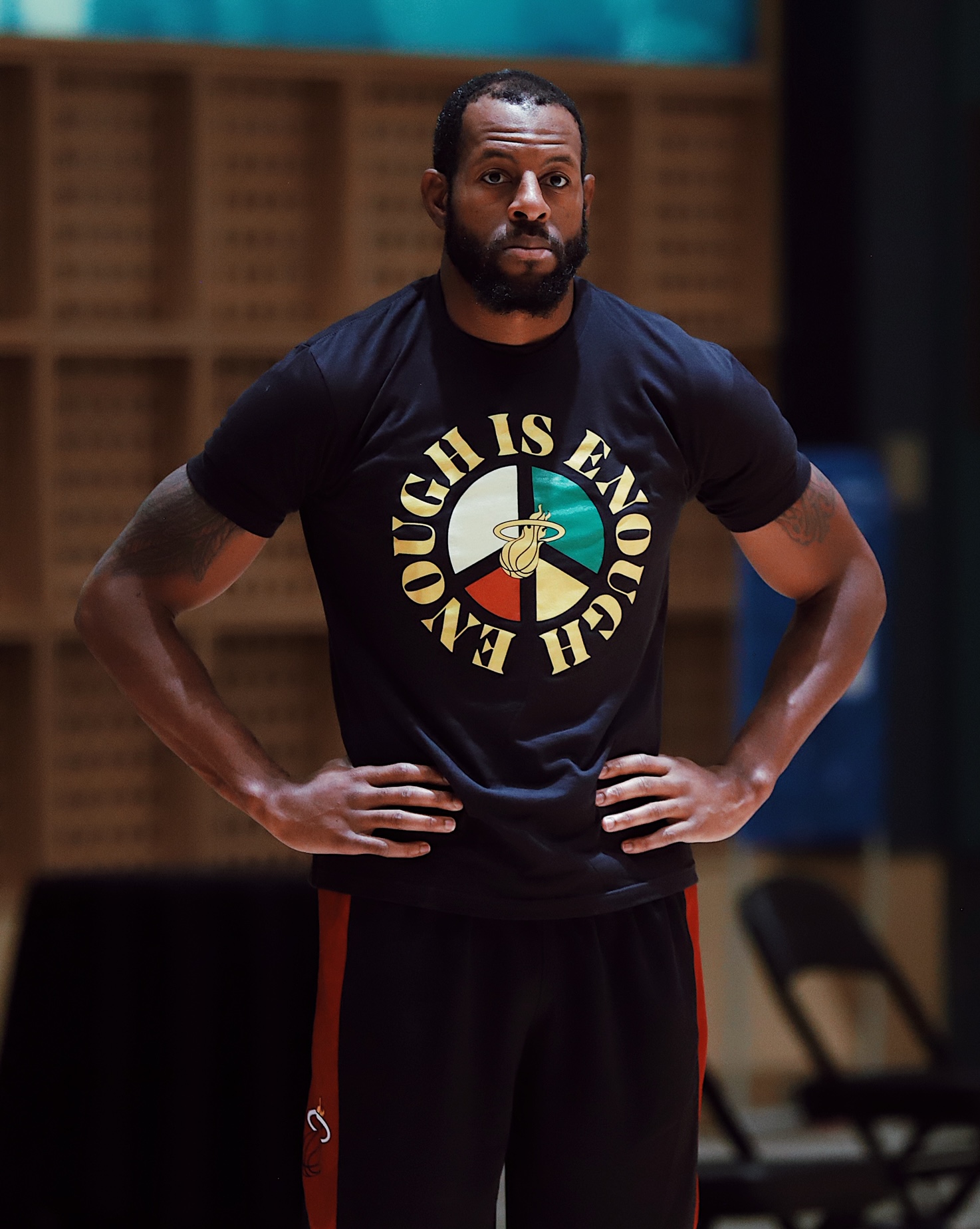 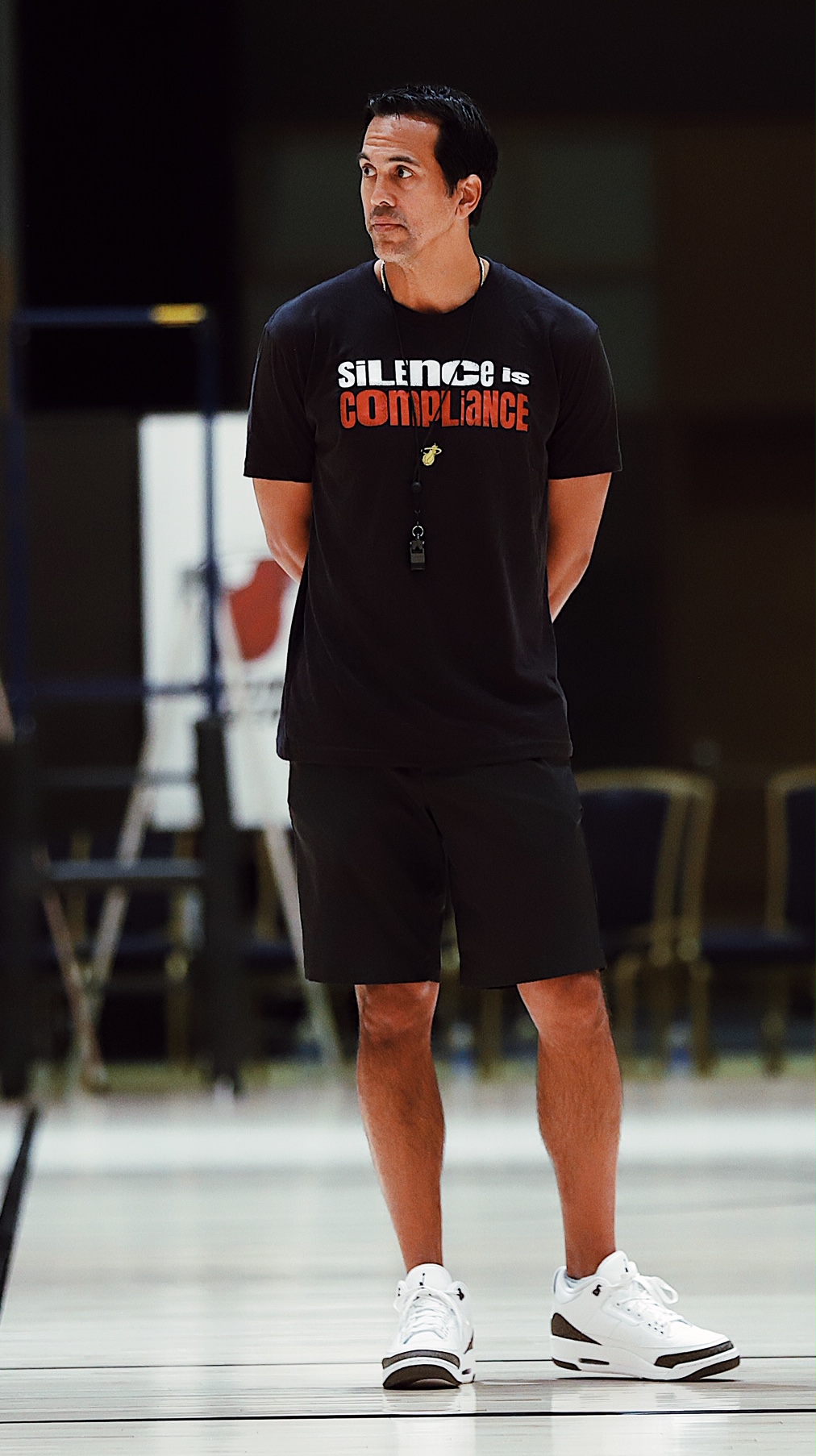 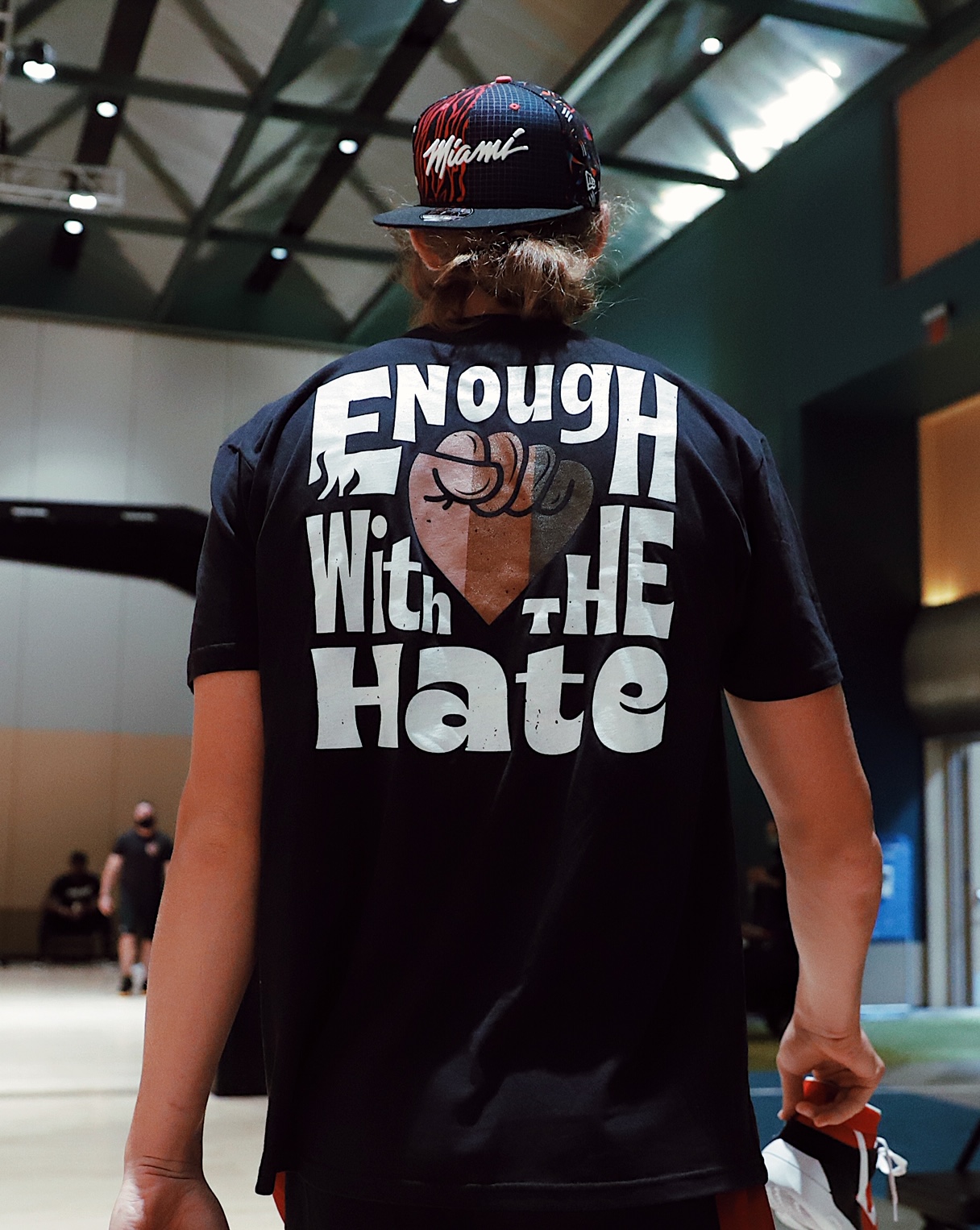 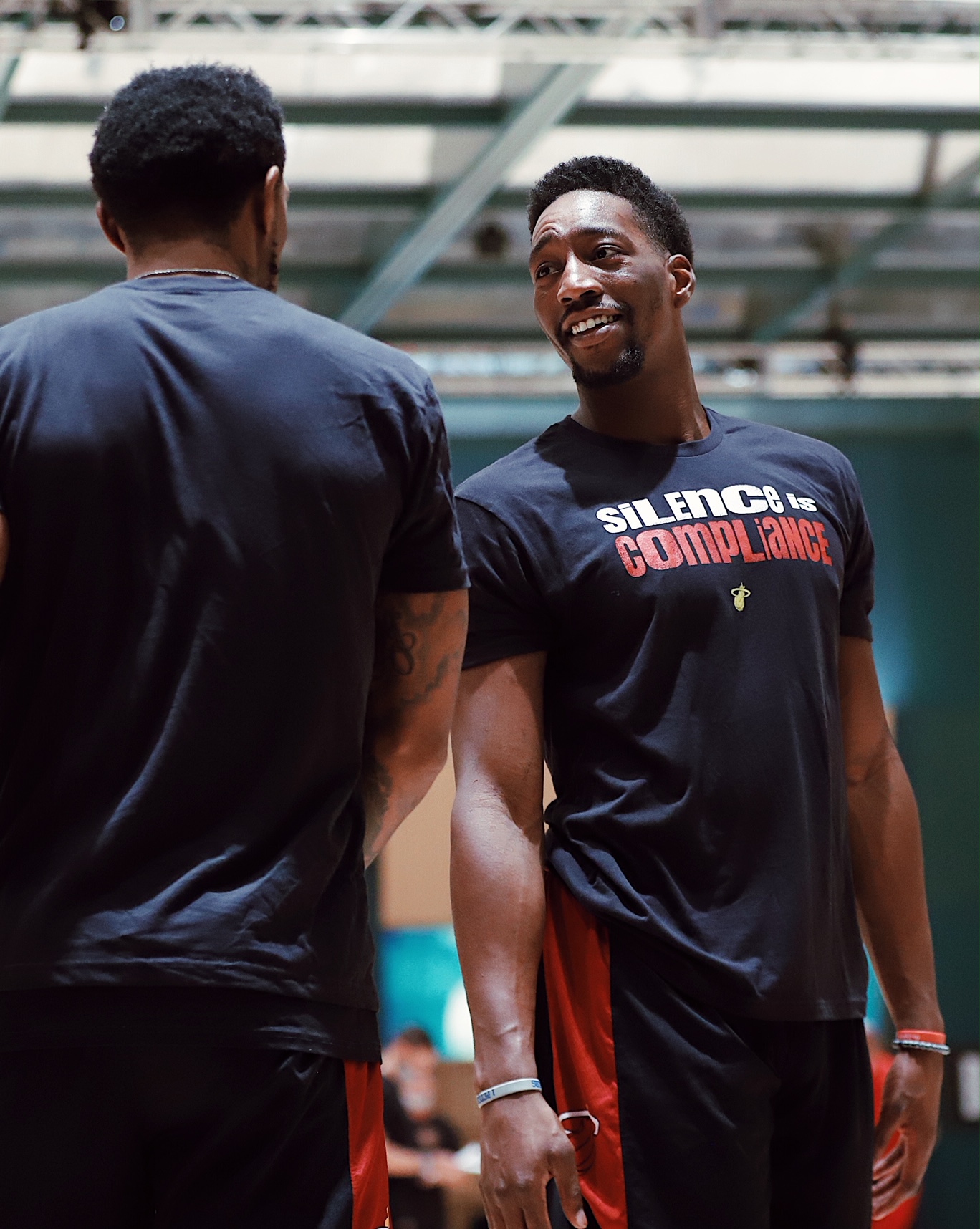 All profits from the sale of the shirts will be donated to Black Girls Code, Health in the Hood and the Florida Rights Restoration Coalition (FRRC). The Heat will also provide additional financial contributions through the team’s foundation. The three groups were chosen from an initial list of over a dozen organizations.

Michael McCullough, the Heat’s executive vice president and chief marketing officer, said the team wanted to have an impactful response to the killing of George Floyd in May. After asking Heat fans what should be done, some recommended coming out with a line of shirts that spotlight social injustices against Black people.

The team landed on creating the shirts and donating the profits to organizations that were “doing some good in the Black community,” McCullough said.

McCullough was personally drawn to the “Enough is Enough” shirt after reading about a Black man being arrested at a Pennsylvania Walmart for riding a bicycle through the store. Video showed two police officers wrestling the man to the ground as he yells, “Why are you doing this to me? I paid for my stuff. I have a receipt.”

“I’m looking at this, and I say to my girlfriend, ‘Enough is enough of this,’ ” McCullough, who is Black, said about the Walmart arrest. “This is going to be my favorite shirt of the campaign because I’m just tired of those kind of scenarios happening.”

Heat head coach Erik Spoelstra is still learning about some of these types of scenarios. Before the protests that sprung from the death of Floyd, Spoelstra, who is of Filipino descent, wasn’t as aware of the societal inequities and racial oppression of Black Americans, even in regard to the players on his team. During a virtual town hall session the team hosted during Juneteenth, veterans Jimmy Butler and Udonis Haslem opened up about the times they experienced racism in their lives, including Haslem recounting having a gun pointed at him by a police officer while he was in the NBA.

“The more you have these honest conversations the more you realize this is so ever-present,” Spoelstra said. “When you talk about a system of racism and racial inequality that’s [stood] over 400 years, that’s a lot to untangle, and that’s why I wanted to listen a lot, educate myself and really dive into the true history, and then see if I can be a conduit for that information to people who wouldn’t necessarily be in this conversation.”

The shirts were designed by Court Culture, the Heat’s in-house design and apparel department, which is notably responsible for the team’s “Vice” uniform collection. McCullough said 50 designs were considered before the list was whittled down to six. He added that more designs will be offered in the future, including during the “bubble” playoffs this season.

Black Girls Code, founded in 2011 by electrical engineer Kimberly Bryant, seeks to increase the number of young women of color entering the science, technology, engineering and math professions. According to the National Center for Women & Information Technology, Black women make up just 3% of the population in the tech field. And their absence leads to problems in artificial intelligence and algorithms in smartphone apps, for instance.

Teaming up with the Heat, Bryant said, brings an elevated focus to the work Black Girls Code has been doing for the last decade and inspires the organization and Bryant to expand and do more.

“It’s an empowering partnership, if you will, that really allows us to elevate the work in a way that more people can see what we are doing , get involved, get engaged and help us reach more kids,” she said.

Health in the Hood converts vacant spaces in low-income, food-starved communities into vegetable gardens while hiring people from those same neighborhoods to tend to them. Those facing food insecurity or living in what the United States Department of Agriculture calls “food deserts” are disproportionately Black and brown. The organization, founded in 2015, runs gardens in four communities, three of which — Liberty City (95%), Opa-locka (57%) and Overtown (67%) — are predominantly African American.

It’s Give Miami Day! Let’s get growing! Click the link in our bio before 12pm tonight to help us grow!

Proceeds from the Heat will go toward Health in the Hood’s emergency food service, grocery store gift cards and prepared meals for the most vulnerable in South Florida. Food access is the “great equalizer” in our society, said the organization’s founder, Asha Walker.

“Access to food and what types of food you have access to have the ability to even the playing field, if you want to use a sports analogy,” Walker said. “You really can change the entire trajectory with access to healthy foods and healthy lifestyles.”

The third organization, the FRRC, works to restore voting rights to people who have completed their sentences for felonies. On July 16, the U.S. Supreme Court declined to overturn a federal appeals court’s decision blocking some Floridians with prior felonies from voting until they pay fines or restitution. Florida was one of a few states that barred those with felonies from being able to vote until a referendum, Amendment 4, was passed with 65% of the vote in 2018. The following year, Florida Gov. Ron DeSantis added a requirement that those affected by Amendment 4 first repay any fines, fees and restitution before they could have their voting rights restored.

According to the coalition, the average fine owed is about $500. The organization has set a goal to raise $3 million to pay the fines and has raised nearly $2 million so far. On July 24, More Than A Vote, an organization formed by LeBron James and other prominent athletes to combat the voter suppression of African Americans, announced it would donate $100,000 to the coalition’s fund.

Desmond Meade, the executive director of the FRRC, said the Heat taking a stance on voting rights of African Americans, who make up about a third of the 1.4 million returning citizens impacted by Amendment 4, helps inspire more people to act against disenfranchisement and other social injustices that disproportionately affect Black people.