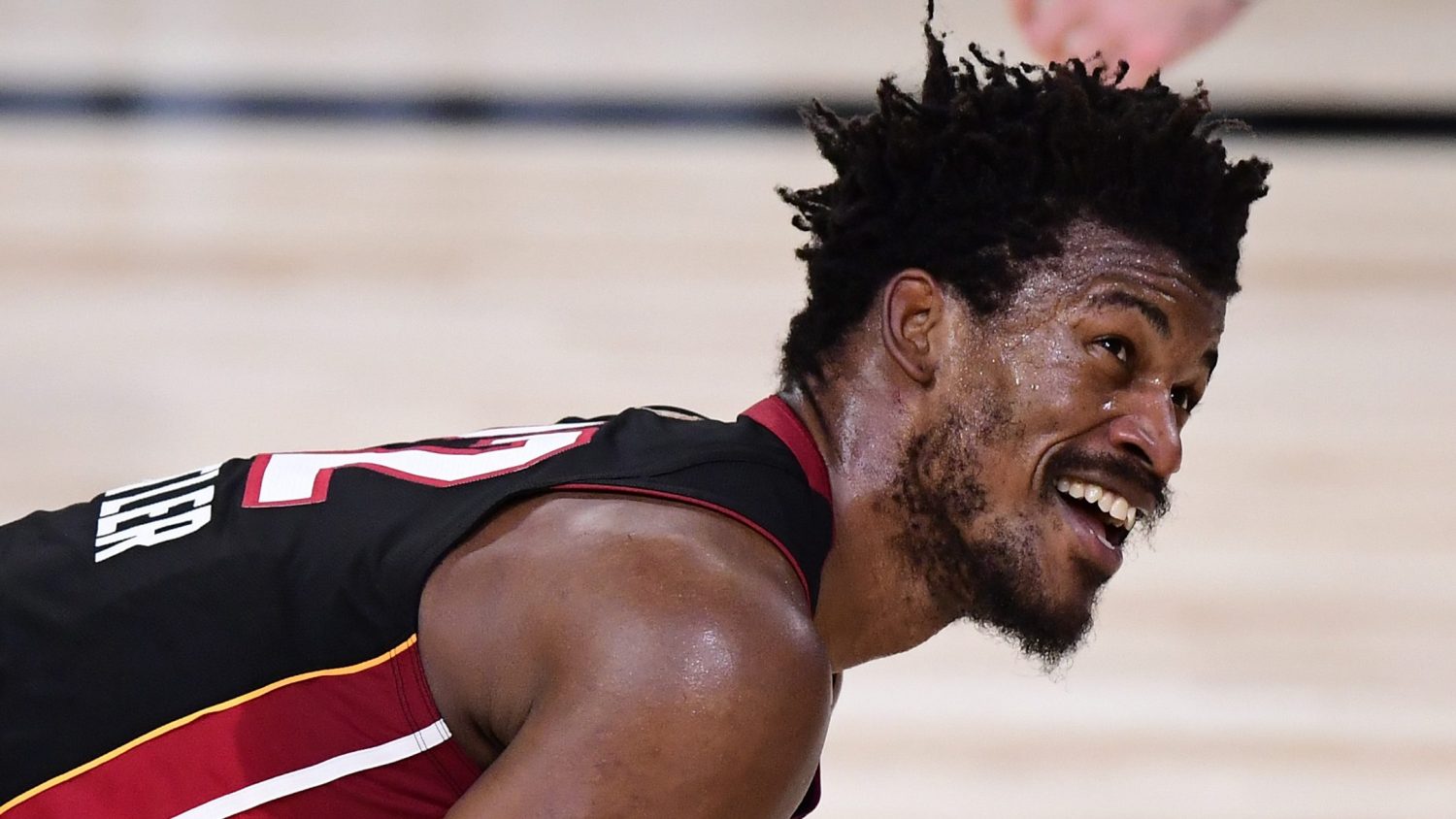 Jimmy Butler of the Miami Heat reacts during the second half against the Los Angeles Lakers in Game 3 of the NBA Finals at AdventHealth Arena at ESPN Wide World of Sports Complex on Oct. 4 in Lake Buena Vista, Florida. Douglas P. DeFelice/Getty Images
NBA

Jimmy Butler is here to stay

LAKE BUENA VISTA, Fla. – When the NBA bubble finally pops and everyone heads home, the player who will be remembered most for breaking through this season is Jimmy Butler.

A five-time All-Star, Butler wasn’t viewed by many as one of the game’s elites, even among his peers, who rated him sixth out of the Eastern Conference frontcourt players on the All-Star ballot in January behind Giannis Antetokounmpo, Joel Embiid, Pascal Siakam, Bam Adebayo and Jayson Tatum. But after leading the dark horse Miami Heat to their first NBA Finals appearance since 2014, Butler has finally received the respect reserved for the league’s superstars.

“One of the best competitors we have in our game,” Los Angeles Lakers star LeBron James said of Butler earlier this week. “For me personally, I don’t know how many more opportunities I’m going to have, so to be able to go against a fierce competitor like that is something I’ll look back on when I’m done playing.

Butler has certainly taken advantage of his moment on the NBA’s biggest stage, averaging 27.5 points, 10 assists and 7.8 rebounds in 41.5 minutes per game in his first Finals. Most importantly, he’s been able to do it by being himself in the bubble.

“If you know anything about him or anything about his story, it just kind of ties it into the fabric of who he is and who he’s kind of always been,” Butler’s agent, Bernie Lee, told The Undefeated. “He’s not a person that’s going to accept the circumstances that are around him in a way where he’s not going to figure out the way to thrive within it.”

Butler has overcome adversity in his life. He was homeless for a time during his teen years before being taken in by a family before his senior year of high school. Not heavily recruited in hoops, he attended a junior college before starring at Marquette. In 2011, he was drafted by the Chicago Bulls with the last pick of the first round.

He became a three-time All-Star in Chicago, but the Bulls didn’t see him as the future face of the franchise and traded him to the Minnesota Timberwolves in 2017. While he helped the Wolves end a long playoff drought, he questioned the work ethic of his teammates and didn’t see eye to eye with Karl-Anthony Towns. In 2018, Minnesota traded him to Philadelphia, where Brett Brown struggled to coach Butler for a season.

In July 2019, Butler joined the Heat in a sign-and-trade that netted him a four-year contract paying $142 million. It appears he also found his home in Miami, where he has fit right into the culture built by team president Pat Riley and head coach Erik Spoelstra.

“I knew the type of structure that I wanted and needed, and it was here,” Butler said. “Heard about it, obviously, when I was meeting with Coach ‘Spo,’ Coach Pat. It just felt right in every aspect of it.

“Everything we’re about, just me working, we’ve got a group of guys that do that, as well as saying it like it is, holding everybody accountable and moving on from it. They said that that’s how we do that. You get to come here and you get to be you. So, I’m in.”

In the bubble, the NBA world has gotten the full Butler experience. From the start, he has stood out.

In the wake of the police-involved deaths of George Floyd and Breonna Taylor, NBA players have worn social justice messages on their jerseys. Butler, however, was the one player who chose not to have any words on the back of his jersey. On Aug. 1, Butler walked onto the floor for the Heat’s first game of the restart with no message or last name on his jersey.

“I love and respect all the messages that the league did choose, but for me, I felt like with no message, with no name, it’s going back to, like, who I was,” Butler said. “And if I wasn’t who I was today, I’m no different than anybody else of color and want that to be my message in the sense that just because I’m an NBA player, everybody has the same right, no matter what, and that’s how I feel about my people of color is this is a thing that we will do more action toward.

“I’m with, like I said, the Black Lives Matter and all the phrases that they chose to put on the back of the jerseys. But for me, it’s a lot more about action and continuing to learn and teach the people around me and doing what I can in my community.”

The referees made Butler change into a jersey featuring his last name before tipoff, but his point had been made.

Throughout his stay in the bubble, he has remained focused. He is known to leave his hotel room only for games, practices and workouts. He hasn’t received a haircut or shave since his arrival in early July. (Though he’s enjoying his new handlebar mustache.) And, according to Heat forward Udonis Haslem, he and Butler both sleep on the uncomfortable beds inside the couches in their rooms instead of the posh king-size beds because they refuse to get comfortable here.

Butler, of course, has also been busy making his own coffee from his hotel room, turning it into a business, Big Face Coffee, by charging a nonnegotiable $20 per cup. (Don’t be surprised if Big Face Coffee goes mainstream, too. Lee says that Butler has a number of new major endorsements coming his way from his time in the bubble.)

“I’ve always liked Jimmy’s game,” Adebayo, the Heat’s All-Star big man, said. “But seeing it upfront and being his teammate, it’s crazy to watch because of how much work he puts in behind the scenes that nobody knows about.

“He’s so locked in to his craft. He gets up early mornings and goes to shoot late nights. A lot of people don’t see him. And he doesn’t come out of his room, obviously, because he’s in there making Big Face Coffee.”

Butler has spent time growing closer to his teammates as well. He has bonded over soccer with Goran Dragic. He has inspired his younger teammates, including Meyers Leonard, who calls him the ultimate leader. He even celebrated his birthday – something that he’d rather not do – by having his personal chef make meals for all his teammates in the bubble.

“Whenever it’s his birthday, if you know him and care about him, you’re going to have to call him either the day before his birthday or like, five days after, because the day of his birthday, he turns his phone off,” Lee said. “He’s done it for years. Normally, his birthday happens in the offseason where he can really leave everybody alone. He just doesn’t like overt attention, as funny as it is to say.

“So, he was stuck with everybody on his birthday.”

Last season, while reflecting with The Undefeated about his career journey, Butler emphasized how important it was for him to be surrounded by the right people.

“Whenever you have the right people in your corner that are always wanting you to do great, life gets easier,” he said. “But also, your dreams seem more reachable and attainable.”

While the Heat enter Game 5 of the Finals down 3-1 to the Lakers, one loss from going home, Butler still sees his goal within reach. He still has more to give.

“This is what you signed up for,” Butler said on Thursday. “This is part of the job trying to win a championship, no matter where it’s at. Here in the bubble, here in Orlando, this is a step in the process of getting where we want to get to. We’re all in it.