Thousands of people were focused on Atlanta Hawks coach Lloyd Pierce. Several of his players and coaching staff stood behind him. Rapper Jeezy looked on as well.

But this wasn’t an NBA game at State Farm Arena. Pierce was at the NAACP’s peaceful “March on Georgia” event in Atlanta on Monday, speaking about racial injustice, police brutality and voting rights.

Pierce has been in Atlanta for only two seasons as the head coach of the rebuilding Hawks. But he has quickly become a leading voice for the franchise, which has taken steps toward effecting change in the community and recently became the first NBA franchise to publicly announce Juneteenth as a permanent paid company holiday.

“We are in Atlanta. And I say that all the time. We can’t be last. We really can’t be second,” Pierce told The Undefeated on Instagram Live this week.

Pierce spoke at Monday’s march for about four minutes on behalf of the Hawks, mentioning George Floyd, Rayshard Brooks, Breonna Taylor, Ahmaud Arbery and the need to repeal Georgia’s “citizen’s arrest” and “stand your ground” laws. He said he wanted to help get rid of policies that have been in place for far too long, and mentioned the Hawks are hoping to have a large polling site at State Farm Arena in downtown Atlanta for the November election.

The crowd roared in approval.

“I felt it was necessary to share,” Pierce said after the event. “It adds more light to the reality and what we’re seeing in our country right now.”

Said Hawks All-Star Trae Young: “To see Coach out on the streets protesting, speaking out about racial injustices and really being vocal in the Atlanta and NBA communities, it encourages me to speak out and use my platform more. Our team is made up of younger guys, who will be in this league for a long time. To have Coach Pierce as our leader is incredible, not just for our organization but for the future of the NBA.” 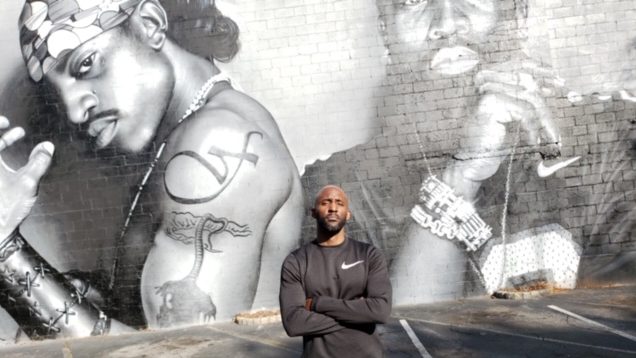 Pierce, 44, has been especially vocal since Floyd’s tragic death on May 25 after white Minneapolis police officer Derek Chauvin was recorded on video pressing his knee to Floyd’s neck for 8 minutes and 46 seconds as he was facedown on the street. Police brutality hit even closer to home for Pierce on June 12 when Brooks, another African American man, was killed by a white Atlanta police officer. The 27-year-old was shot in the back twice while fleeing from officers after they had wrestled and Brooks grabbed a stun gun from one of them.

Pierce said the scary part with these tragic events is that African Americans become immune to police brutality toward black men.

“These things have happened so often that they are going to continue to happen,” Pierce said. “We all have gone about our lives however we may do so. When the incident with George Floyd happened in Minnesota … the biggest fear I had when that incident occurred was, ‘Man, what is it going to be like when it happens on our doorstep?’

Thankful my MJP’s were able to get the message out! Maya Joy is not afraid to say it! #blacklivesmatter #votewithlove #truetoatlanta

“The focus was what can we do to impact change as an association first so we can help our players drive this need of education about the history of African Americans in our country, building trust in our communities and tackling this law enforcement issue that we are seeing,” Pierce said. “What can we unite as coaches to address those things? …

“There is no timetable. There is no, ‘We have to do this by next month and this will look great for the coaches in the NBA.’ Nah. That is not what this is about. We need to really build up trust in all 30 NBA cities because our communities are broken right now.”

Since becoming the coach of the Hawks, Pierce has specifically made it a point to connect his team to the community. This year, he took his players on a field trip that included stops at the Outkast mural in Little Five Points and Martin Luther King Jr. National Historical Park. The former Santa Clara basketball guard also hosted free weekly basketball clinics for coaches in Metro Atlanta in April and has helped raise money for local charities during the coronavirus pandemic.

His efforts have been noticed throughout the community.

“I love Coach,” rapper and activist Killer Mike, an Atlanta native, told The Undefeated. “I’m going to be frank. I love black men being leaders of their teams. What he has been able to do in terms of enthusiasm with his players, I love.”

This month has been especially busy for Pierce. Besides the march, he participated in a company-wide panel on June 5 to discuss racism and how to eliminate it. Pierce and his wife Melissa voted and invited other Georgians to vote on June 9. Pierce also visited the Legacy Museum in Montgomery, Alabama, on Tuesday with Bryan Stevenson, who is the founder and executive director of Equal Justice Initiative, a human rights organization. And on Thursday night, he joined Atlanta Falcons head coach Dan Quinn in a virtual conversation on race and social justice.

Hawks majority owner Tony Ressler says he is proud of Pierce and his franchise’s part in the fight for social reform.

“At the Hawks, we continue to reflect on the impact that systemic racism has had and continues to have on this country,” Ressler told The Undefeated. “As we have said before, we firmly believe that you are either part of the solution or part of the problem. Black Lives Matter, and we admire how Coach Pierce is part of the solution with his words and actions, and couldn’t be more supportive.”

The Hawks, with a 20-47 record, will not be among the teams to play in Orlando, Florida, to finish the season. Pierce, meanwhile, will continue working for change in the streets of Atlanta.