Ja Morant isn’t satisfied being rookie of the year

Ja Morant promised his family he would win the 2020 NBA Rookie of the Year award.

So, what has the Memphis Grizzlies budding star promised for his second NBA season?

“A lot more,” Morant told The Undefeated in a phone interview last week while promoting his upcoming docuseries Promiseland. “I want to have a very successful career.

“I wasn’t satisfied after winning the NBA Rookie of the Year award.”

While there was a lot of hype surrounding New Orleans Pelicans rookie Zion Williamson entering the 2019-20 season, it was Morant who stole the show. From start to finish, Morant was the steadiest rookie in the class, finishing the season with per-game averages of 17.8 points, 7.3 assists and 3.9 rebounds while shooting 47.7% from the field. Morant joined NBA All-Stars LeBron James and Nikola Jokic as the only three players to average at least 17.0 points and 6.0 assists and shoot 49% or better from the field last season.

The former Murray State star landed 99 of 100 first-place votes (one went to Williamson) from a global panel of sportswriters and broadcasters to earn rookie of the year.

“Being named rookie of the year felt great, honestly,” Morant said. “There are not many people you can name who have won that award. It definitely was an honor. Something I was working for all year. I also told my family once I got drafted that I was going to win the award. To be able to win it and back up my words was something good.” 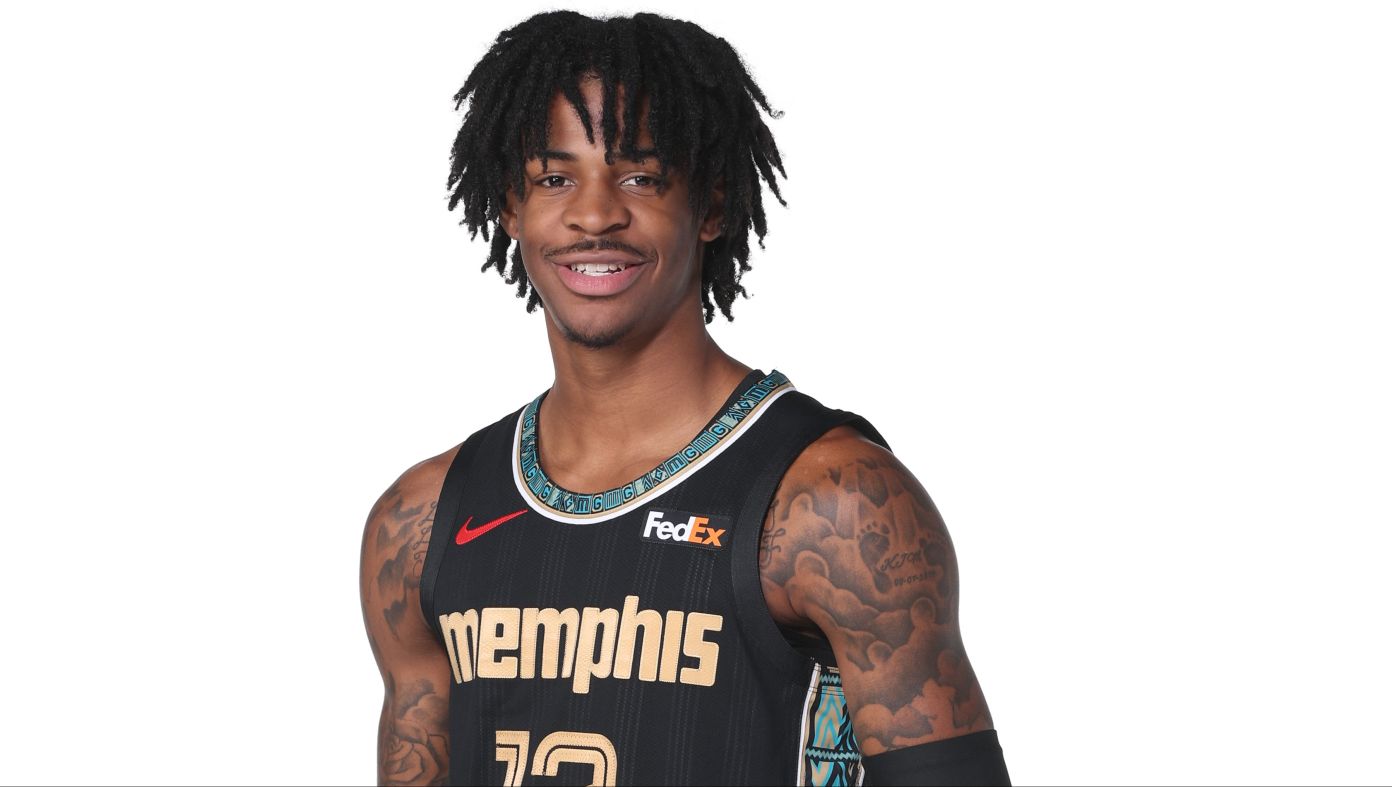 Morant’s individual success helped put the Grizzlies into the playoff picture earlier than expected. But ultimately the team fell short of making the postseason after losing a first-ever playoff play-in game in the NBA bubble to the Portland Trail Blazers.

Morant revealed after the season-ending loss that he was playing in the bubble with a fractured thumb. The Sumter, South Carolina, native also played with a significant upper leg injury that he confirmed to The Undefeated.

“I will be honest now. I was in a lot of pain,” Morant said. “But, I was trying to do whatever I could to help my team win. I wanted to make it to the playoffs, therefore I had to put my body on the line and fought with my teammates.”

While Morant was down about being eliminated, he said he was excited about the experience in the bubble, including being a part of the social justice movement led by the NBA players in the aftermath of George Floyd’s death at the hands of police in Minneapolis on May 25.

Morant, who has a young daughter, said he was strongly affected by the police brutality deaths of Floyd and Breonna Taylor in Louisville, Kentucky, and the police shooting of Jacob Blake in Kenosha, Wisconsin.

Morant wore the social justice message “Enough” on the back of his Grizzlies jersey throughout the NBA restart.

“I was proud when I saw players, teams and organizations stepping up and speaking out,” Morant said. “I was trying to speak out as much as possible. I definitely wanted to speak out being a father. I definitely don’t want my daughter to go through anything like that or scared because of me just being Black. You never know what can happen. It definitely was tough. It needs to stop. …

“Just seeing somebody lose their life and not get justice, that hurt. A lot of prayers to their families. Hopefully, we can keep fighting for them and they can get justice.”

Morant, who was lightly recruited out of South Carolina and starred at a mid-major, has been documenting his journey in the NBA with Promiseland director Dexton Deboree. The docuseries will include family footage dating back to Morant’s youth and focus on his rookie season.

“I just wanted to tell my story,” Morant said. “Some people really don’t really know exactly what went into play and what exactly I’ve gone through. There are some things I keep out for something like this where I could tell everything in the documentary. …

“The hardest thing for me to have filmed was my family. Normally, they really don’t talk much, especially my mom. They had to convince my family to get deep into it and tell stuff.”

Morant even filmed himself while in the bubble in his hotel room.

“I wouldn’t say I felt like I was on some reality show confessional speaking from my hotel room, but it wasn’t something that I was used to,” Morant said. “It was something new, but I enjoyed every bit of it.”

Grizzlies fans surely enjoyed Morant’s exciting scoring, dunks and steals during his rookie season. But it’s uncertain when NBA fans will be able to fill arenas again due to the pandemic. Morant says he misses playing at FedExForum in front of Grizzlies fans.

“They have showed me love since Day 1,” Morant said. “They helped us rally through the season with their energy in the gym. We fed off of it. We were able to win a few games for them and with them. We will see how everything goes if we can get some fans into the arena.”

While Morant is healthy again, Memphis has other notable injuries that could impact the start of its season. Most notably, Grizzlies power forward Jaren Jackson is still recovering from a meniscus tear in his left knee suffered in the bubble. While Grizzlies executive vice president of basketball operations Zach Kleiman said Jackson was “ahead of schedule,” he did not offer a timetable for his return. Kleiman added that the Grizzlies are also expected to be without forward Justise Winslow (hip) for the start of the season.

But Morant won’t use those notable injuries as an excuse for Memphis.

“We got to play with what we have,” Morant said. “We have a lot of guys on our team. My job is to make sure that everyone plays with confidence. Make sure we are doing the right things.

“I am a leader and that’s what I have to do. When we start, we will play with whoever, and go from there.”