With ‘Black Power Kitchen,’ Ghetto Gastro has the hardest cookbook in the game

“The book is really just us: how we move, how we approach business, how we approach life,” Gray says, responding to the praise. “It’s like, not hard in a callous way, but with a certain strength and gravitas, and confidence.”

Ghetto Gastro, a three-member collective comprising Gray, Pierre Serrao and Lester Walker, works at the intersection of culinary art and “the culture,” producing events, food products, cookware and fashion. Serrao and Walker handle chef duties while Gray leads on design. They’ve been accessible to consumers because of partnerships with Beats by Dre, Williams-Sonoma, Nike, and Target. Their brand has found an underserved space that invites guests to experience, taste, and embrace the radiant Blackness of a world we’re living in together.

With Black Power Kitchen, released Oct. 25, they now have a cookbook that serves as a road map of where we go from here while looking back at how we arrived at our place in today’s world.

“For a long part of our career, our work has been an uphill battle,” said Gray. “Everything we were saying was not being received with open ears. We’ve talked about Black power, liberation, and not code-switching but being our true selves and the value of Black creativity. Coming from the framework we’re coming from, that wasn’t always readily accepted.

“Post-pandemic, post-George-Floyd, and post-Breonna-Taylor, there’s more light being shed. Also the interior conversation as Black people is like we’re taking notice and understanding the value that we have amongst each other, not necessarily always needing to center European ideals or the white gaze.”

Black Power Kitchen embraces plant-based cooking and Endolyn insists healthful, nutrient-dense, plant-based eating has always been a part of Black communities throughout the African diaspora. She believes the skill of creatively preparing vegetarian and vegan food, which she considers a birthright of Black people, has been clouded by acts of “massive systemic interference on a global scale.” 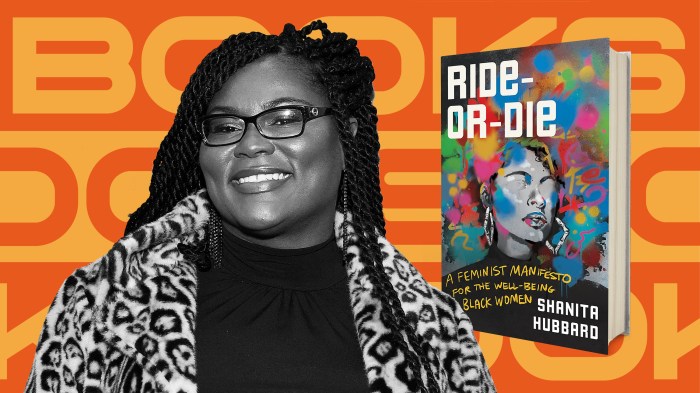 “Much of my work lives in the act of reclaiming what was and is naturally and perfectly ours,” Endolyn said. “All the factors that still link us closely to enslavement and colonialism have denied so many the traditions that they are just now finding our way back to, and this is happening around the world. It’s a celebration that Ghetto Gastro can be part of this discovery but it is also an indictment that what was ours has and continues to be stolen or eradicated from us.”

While the word “activist” is not generally associated with cookbooks, there’s no way to miss the call-to-action energy. The first word atop the book’s cover is “GHETTO” in big white letters. And this isn’t light work; it’s just over 300 pages of dietary revolution.

Jessica B. Harris, culinary historian and author of the book High on the Hog: A Culinary Journey from Africa to America (which inspired the Netflix series), gets things moving with a foreword in which she calls Ghetto Gastro’s partners “culinary warriors.” She introduces their recipe for Triple Cs, a combination of seared cornbread, crab salad, and caviar, as both a recipe and culinary manifesto, balancing layered luxury with a lesson in how the exploitation endured by Native Americans, Black people and Latinos neither extinguished our aspirations nor our hunger for escapism, however brief.

Moving through the pages, readers experience a tour of food memory and storytelling. It’s seasoned with photography, art, and illustration that lay out Ghetto Gastro’s love of New York City’s spectrum of color and culture, including recipes for King Jaffe Joloff, coconut ceviche, zero-proof beverages, and vegan meals, such as the lentil and plantain Strong Back Stew. 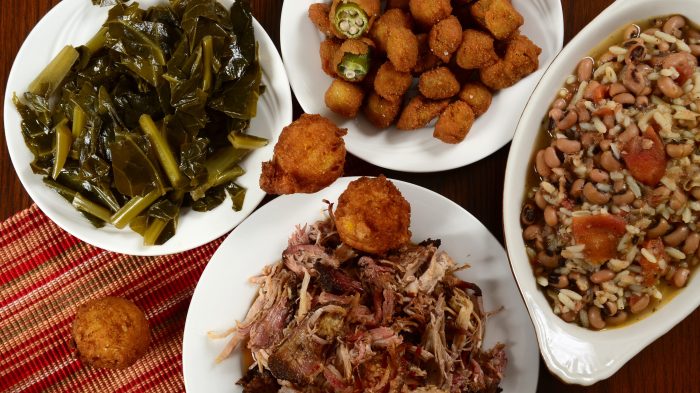 Between recipes, there are interviews with notable people. Harlem rapper A$AP Ferg talks about first having frog legs and buttery snow crab with his father, Darold Ferguson, the creator of logos for Uptown Records and Bad Boy Entertainment, during childhood trips to City Island in the Bronx. Detroit native dream hampton, co-author of rapper Jay-Z’s Decoded, shares tales of her culinary tourism, from enjoying jollof made with freshly slaughtered chicken in Ghana to the range of Asian cuisine in Los Angeles, her favorite American food city.

As welcoming as those recipes sound, and as much as the cookbook celebrates Black survival, Black Power Kitchen isn’t warm and fuzzy. One cocktail is named Toussaint, after Toussaint Louverture, the Haitian general who led the most successful rebellion of enslaved people in history. And it’s fitting that this drink is made not with Bacardi rum but clairin, the native spirit of Haiti, with Clairin Sajous, a Black-owned brand, specifically recommended.

“We like to think that this product expands oversimplified, commercialized perceptions of rum in the United States, just as Haiti is much more than what it is reduced to in dominant American media narratives,” reads the description above the Toussaint recipe.

Asked about the inspiration for the book, Endolyn mentions South African anti-apartheid activist Winnie Mandela, Black Panther Party chairman Fred Hampton, and poet Nikki Giovanni — specifically her 1970s conversation with essayist James Baldwin on the TV show Soul! Much of what those figures endured as they searched for Black liberation begins within, Endolyn said. “Much of what Ghetto Gastro does feels new to folks, but this book, and much of their work, travels a path that our ancestors have walked across every genre.”

Endolyn, a two-time winner of the James Beard Award, says Black Power Kitchen is infused with the pain and lessons of the past few years. “I call this book my pandemic baby because so much of our raw, tender parts were exposed every single day during the process of writing,” she said. “I was often literally laying on my apartment floor breathing through the trauma we collectively endured. Our fight has been crucial but I’ve personally experienced the energetic shift of refocusing the lens on a love ethic, thanks to [author] bell hooks and folks like [poet] Tricia Hersey. So the gentleness and ease is actually germane to the activism and advocacy.”

Black people are becoming more aware of the role that food plays in our survival and our advancement and realizing that our people have been malnourished in many ways. To see ourselves as soldiers, we must understand the necessity of healthful eating and the essential work of educating ourselves and our communities. Black Power Kitchen seeks to empower readers to see healthful and nourishing food as a revolutionary act leading to personal freedom.

“I’m hopeful that it’s not a moment; it’s a movement,” Gray said. “We’re giving you food for thought and food for your belly, to nourish yourself and nourish the world.”

Mike Jordan is an award-winning writer, editor and culture critic based in Atlanta, Georgia. He is an editor at Resy.com, a radio host for Atlanta’s NPR station WABE, and frequently contributes at The Wall Street Journal, The Guardian, Rolling Stone, Southern Living, Atlanta Magazine, Eater and others.