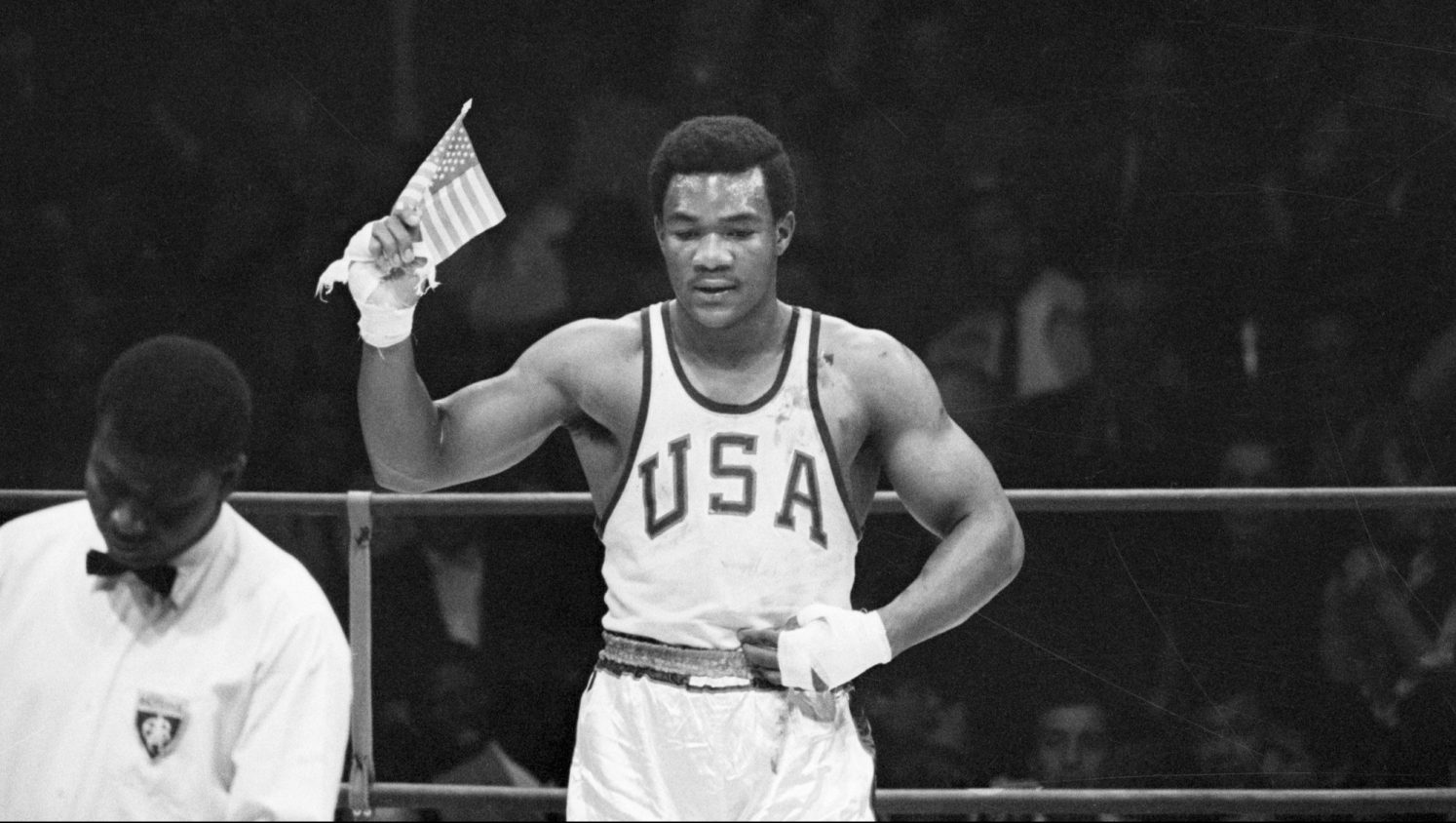 George Foreman: ‘If I had to do it all over again, I would have had two flags’

George Foreman, a Texan by birth and girth, has been a fascinating, sometimes bewildering slice of the American culture for five decades.

Puncher, preacher, pitchman — Foreman has worn many hats and belts, including that of oldest world heavyweight champion in history when he was 45. During a troubled youth, Foreman dropped out of high school and joined the Job Corps. By 1968, the pulverizing puncher was a member of the U.S. Olympic boxing team in Mexico City. Foreman won a gold medal when his bout against Jonas Cepulis of the Soviet Union was halted by the referee in the second round. What Foreman did next always has been the subject of some speculation.

Foreman’s medal-winning bout, occurring only days after a controversial medals-podium protest by U.S. track teammates Tommie Smith and John Carlos, ended with him patriotically parading around the ring clutching a U.S. flag.

Foreman, 69, spoke to The Undefeated about that moment a half-century ago, Colin Kaepernick and more.

U.S. track stars John Carlos and Tommie Smith defiantly stood on the medals stand in Mexico City with heads lowered and black-gloved fists raised to protest racial discrimination and social injustice in America. Days later, you paraded around a boxing ring proudly clutching a tiny American flag after winning a gold medal. Some suggested that the International Olympic Committee persuaded you to defuse the controversy. What’s the truth?

When I walked into the Olympic Village, I saw a couple of athletes who looked like me. I went to speak to them, but they couldn’t speak English. For the first time, I realized that the only thing that could identify us was our nation’s colors. I thought that, after I win my last fight, when I bow to the judges, I am going to carry our flag. [Everyone] is going to know where I am from. I sincerely didn’t think they would. I waved the flag so they knew I was American. Everyone started applauding, so I waved it higher. That is the only reason I had that flag. If I had to do it all over again, I would have had two flags in my pocket [laughs]. Frederick Douglass once said, ‘I didn’t know I was a slave until I realized I couldn’t do what I wanted to do.’ [When I waved the flag], I just wanted people to know where I was from. When you can do what you want, you’re free.

Was there a backlash for you?

I went home and wore the gold off that medal. It was 1968, and it really fit well with my Nehru jacket that was in style. I proudly walked down Lyons Avenue in the 5th Ward [in Houston] wearing my medal. A guy I thought was a friend walked up, looked me in the face and said, ‘How could you do what you did when the brothers [Smith and Carlos] were doing their thing?’ It … broke … my … heart. I didn’t expect that. I didn’t know what he was talking about. I looked at him kind of funny. He walked away. I guess he thought, I’d better go.

Did the moment he regarded you as a race traitor change you?

From then on, anyone who came up to me and might say the same thing, they were only seconds away from getting [the glare], man. I carried a chip on my shoulder. It turned into anger. I changed, my face changed into a sword. It was fierce, I wasn’t playin’. Across a room, I would hear people say, ‘Ask him for his autograph.’ Someone would say, ‘No, you ask him.’ Or: ‘Send your kid.’ I was not going to let anyone hurt me like that anymore, like an old turtle in a shell. Then, like a banana, I peeled off [the look] during my metamorphosis [decades later].

Do you find it interesting that President Trump pardoned turn-of-the-century black heavyweight champion Jack Johnson, but that President Barack Obama did not?

It’s a wonderful thing [for Johnson], a clean slate. He was a special guy [and a fellow Texan]. The novel, Uncle Tom’s Cabin, was more persuasive [regarding racial attitudes] than any book. Then comes Jack Johnson. He tore down the Cabin, log by log. That’s all he was guilty of. (Johnson was convicted of violating the Mann Act for transporting white women across state lines for “immoral purposes.’’) Trump, more than any, saw what boxers can really do. We had boxing promotions in his hotels, and he built a dynasty. I can see him easily doing that more than President Obama and other presidents because there was nothing earthy about them. President Trump is the most down-to-earth guy.

Unlike Muhammad Ali, you never seemed to be vocal regarding racial injustices. When former San Francisco 49ers quarterback Colin Kaepernick refused to stand for the national anthem in 2016, what was your immediate reaction?

It bothered me. Then, it rolled off my back like water off a duck. But it was nice to see young people still thinking. People of my generation often wonder if anyone’s thinking anymore. This young man is still thinking. What I lived through was John Carlos and Tommie Smith. They were trying to say, ‘We are Americans!’ That’s all they were saying. They weren’t trying to make another statement. These are Americans expressing themselves. It’s inbred for Americans — we make statements. To live in this country, you should try to make a statement about something [important] before you die.

After Kaepernick’s stand, other NFL players took up the mantle of civil disobedience. Did that disrespect U.S. war veterans?

There always will be a place for protest. Once you find a country that does not have protests, then you just need to get on a boat and go somewhere else. When you don’t have protests, or people making statements, get out. There is a place for those guys. But, understandably, I am in love with the national anthem, and wavin’ that flag. I love that stuff. But I also love the fact that I live in a place where my kids tell me some of the most foolish stuff I’ve ever heard [and are permitted to do so]. Sooner or later, if we are the country we say we are, we can handle it.

Commissioner Roger Goodell and the NFL continue to be criticized for their handling of the issue. How would George Foreman resolve it?

With so many young, rich guys, you have to understand that, like us farmers, you cannot herd bees. With rich comes a big tongue. You try to herd bees, you will get in trouble. Sooner or later, they always come back to the box. If you let players kneel, they’re going to get mad at you for that and start standing. You just don’t say anything — put the best teams on the field and go about your business. Let the media tell their stories. You cannot win.

Why does Kaepernick, a Super Bowl quarterback, remain unsigned by any team?

Let me give you a little history. I loved ‘The Bullet’ [Hall of Fame receiver] Bob Hayes. When the Cowboys traded him [to the 49ers], I stopped watching them for 10 years. I was so upset. After I met [Cowboys owner] Jerry Jones, my warmth for the team returned. If Kaepernick had been a Dallas Cowboy during the ‘knee era,’ I would say he could have done no wrong. But [if I am Jones], I am not going to say a 49er should have a job, and beat the Cowboys.

But do you think the NFL is blackballing him?

Hopefully, this will illustrate it: I was in the Job Corps in 1965. First thing they taught us dropouts was to look recruiters right in the eye, shake their hands firmly, make sure you are dressed well and answer politely. Ten guys can be qualified, but the one they like will get the job. If you want people to give you a job, you have to make them love you. If you want people to do right, you’re going to have to dedicate yourself to protesting and demonstrating. That does not mean people are going to like you and say, ‘Here is a job.’

Ali temporarily lost his boxing career when he stood up for religious principles. How did you feel when your longtime friend and foil died two years ago?

To this day, I still have not gotten over it. That is one person I’ve known, and loved, more than someone who wasn’t in my family. He was like a brother. I have moments where I cry a little bit. I didn’t realize what a blessing he was.

Jon Saraceno is a freelance writer who wrote 29 years for USA Today as a columnist, NFL and boxing writer. He can be reached at jonsaraceno@gmail.com.