MUNICH — When the NFL announced in May that the Seattle Seahawks and the Tampa Bay Buccaneers would play the first NFL game in Germany, the matchup seemed anticlimactic. Outside of the novelty of playing a football game in Germany, there really didn’t seem to be much juice.

Tampa Bay, with legitimate Super Bowl aspirations, had legendary quarterback Tom Brady and a primo defensive coordinator-turned-head coach Todd Bowles. Seattle seemingly traded away its hope in March when it sent iconic quarterback Russell Wilson to Denver. That left the Seahawks with 31-year-old quarterback Geno Smith, dismissed as a career journeyman, to carry the team.

Six months after it was announced the Seahawks and Buccaneers would face each other in Germany, Smith is one of the NFL’s hottest quarterbacks and largely because of that, Seattle is the league’s most surprising team. Instead of being a novelty competition played before a raucous crowd, Sunday’s Tampa-Seattle game became a high-stakes game between contenders.

Munich was also the site of an unlikely reunion between Bowles and Smith.

The coach and the player have a shared history that goes back to the two years they spent together with the New York Jets. It was a time each man might like to forget but a time that made them what they are today: Smith is a potential Pro Bowler and Bowles is getting a rare second opportunity for an African American to be an NFL head coach.

Bowles and Smith met in 2015. Bowles was a first-year, first-time head coach with the Jets. Smith, who was drafted in 2013, was a 24-year-old quarterback trying to find his way, with mixed to mostly poor results. He started for two seasons and struggled.

Smith was prepared to take a big leap in 2015 with the Jets, who brought in new receivers and more weapons. But in August 2015, a disgruntled teammate punched Smith in the face and fractured his jaw in two places. That changed the trajectory of Smith’s career.

The injury sidelined Smith for weeks. He never got his starting job back.

During the 2016 season, Smith continued in the backup role, then suffered a season-ending knee injury. His tenure with the Jets was over and his journey through the NFL wilderness began, first with the New York Giants in 2017. His only start that season came when the head coach and general manager agreed to start Smith in place of franchise legend Eli Manning. Smith became the first Black quarterback to start for the Giants — a pretty amazing distinction in and of itself. He also broke Manning’s string of 210 consecutive starts. Coach Ben McAdoo and general manager Jerry Reese were fired a day after Smith started and the Giants fell to 2-10.

Smith spent the 2018 season with the Los Angeles Chargers, appearing in only five games as a backup. Then he signed with the Seahawks in 2019. He was released three months later. He re-signed with Seattle again in 2020 and made one appearance. Last season, Smith re-signed with Seattle for a third time and was pressed into action for four games after Wilson suffered a finger injury against the Los Angeles Rams. He started off well then faded and critics said, “Well, that’s why he’s a career backup.”

This year, Smith has been amazing. He is completing a league-leading 73.1% of his passes and ranks in the top 10 with 7.8 yards per attempt. With Wilson gone and the coaching staff and team behind him, all of the lessons learned over the years seemed to coalesce for Smith: leadership, confidence, wisdom.

Asked about his transformation, Smith told reporters in Munich that “I think it’s a mixture of talent and mental stability. I think those things are coming into a good combination right now. I’ve always had those two things. It’s more so me being in the light versus doing it in the shadows.”

Bowles is legitimately happy for the young quarterback he once coached.

“Obviously, the experience he’s had over the years has helped him greatly,” Bowles told reporters in Germany last week. “He was always smart, he was always heady, he was always a hard worker. I’m glad to see it pan out for him. I’m happy to see the success he’s having.”

In Munich, Smith spoke warmly of Bowles, saying he helped him through a difficult time in New York earlier in his career.

“I learned a lot from him about defenses,” Smith said. “He was always a guy I felt like was in my corner. We had many talks. That was obviously during a tough time in my NFL career. I was still young and up-and-coming, and coach Bowles helped me through a lot of those situations.”

Bowles didn’t last much longer than Smith in New York. He was fired by the Jets in December 2018 after a 4-12 season. He joined Tampa Bay as defensive coordinator in 2019 and fashioned a defense that helped Tampa win a Super Bowl title a season later. In March, after coach Bruce Arians retired, Bowles was named coach of the Buccaneers.

After Sunday’s game, I asked Bowles what he’d learned from his first go-round as a head coach. Specifically, did he think he was smarter. “I think I’m wiser, because you get experience as you go,” he said.

The journey is not over for Bowles or Smith — not even close, and they both know it. Tampa Bay, with its own issues, is in a dogfight of a race, as it clings to first place in an NFC South mired in mediocrity. Although he agreed to a five-year deal with Tampa, Bowles knows all too well that results are the only things that matter. He also agreed to a three-year extension with the Jets and was fired.

When I asked Bowles how he helped Smith through his difficult time in New York, he said his approach was not as a coach but as a mentor giving guidance to a young person when he needed it.

“You want to be a coach — that comes easy,” he said. “But you also want to help these guys after football is over. You feel you have a role to play in their future in some small way. Anytime you can help a guy get through a tough time, knowing that you’ve been through it yourself, it’s our job as coaches not just to coach them on the field but to try to help them off the field, especially when they need it.”

Smith still carries a heavy burden of proof. He knows that all it takes is two bad games for the doubts to resurface. He has been a free agent every offseason since he came into the league with the Jets. Will he find a well-paying home? As it stands, Smith is one of the NFL’s biggest bargains. He’s making $3.5 million this season. That’s less than one-tenth of what the NFL’s top quarterbacks make. He’ll become a free agent after this season.

Will there be a long line of suitors for Smith or will there be lingering suspicions that this season is an anomaly — that Smith is really a backup?

The good news is that nine years after Smith’s rookie season, the NFL now embraces the mobile skill set that made Smith a hotshot college quarterback at West Virginia. In many ways, the league has come back to him, and Smith has survived long enough to enjoy the transition.

“He runs the offense well, he knows what to do, he’s comfortable in the system and the guys around him,” Bowles said. “He’s doing a hell of a job right now, so my hat’s off to him.” 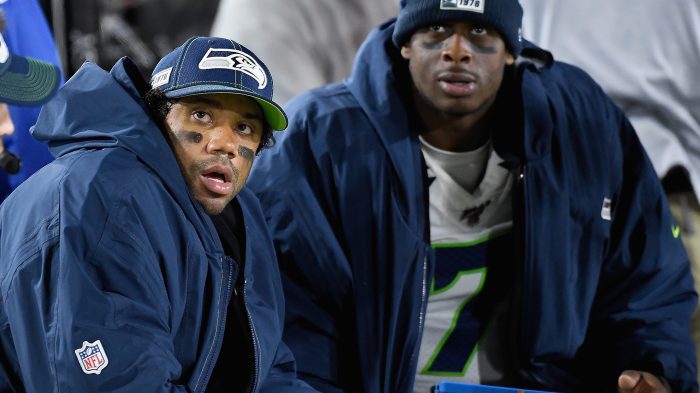 Geno Smith and the year of the backup black quarterbackRead now

I met Smith in 2013, his rookie season and first year with the Jets. Michael Vick was his backup. Vick, the first Black quarterback to be taken No. 1 overall in the NFL draft, was also Smith’s hero and mentor.

During one of those conversations — Smith was talking about his future — Vick happened to walk by. Smith pointed to him and said: “He’s played 11 years. If I can play 11 years in the league and be successful and do some of the things that he’s done, I would call that a good career.”

Smith needs two more years to reach that 11-year threshold. Bowles, who turns 59 later this month, is an NFL lifer enjoying his second bite at the apple as an head coach. Their reunion in Germany is a testament to each man’s resilience and determination.

It’s also a nod to sage advice: all things in time.