On Jan. 22, 1973, George Foreman took the championship from Joe Frazier in a bout that staggered the world of boxing

The menacing George Foreman, who knocked out 34 of his first 37 opponents, stared down the shorter Joe Frazier during the weigh-in prior to their heavyweight bout 50 years ago.

“I’m so glad that he didn’t look down because my knees were shaking,” Foreman said to Andscape. “I didn’t fear anyone except Joe Frazier. I watched his fights, and he was like a machine. If you hit him, he liked it. If you missed, he got angry and came after you. I hoped something would’ve happened to him before I’d ever fight for the title.”

Unfortunately for Frazier, plenty happened to him on Jan. 22, 1973, in one of boxing history’s most brutal heavyweight championship fights which included six knockdowns and spawned the infamous “Down goes Frazier! Down goes Frazier! Down Goes Frazier!” call from announcer Howard Cosell. The bout was so savage that Foreman yelled to his manager and to referee Arthur Mercante to “Stop the fight before I kill him.”

Foreman’s victory remains the highlight of his hall of fame boxing career, and it was Frazier’s worst defeat, just two years after his greatest triumph in his classic bout with Muhammad Ali in “The Fight of the Century.”

That’s one reason why his loss to Foreman was so shocking. Frazier (29-0, 25 KOs) entered the bout with fewer fights, but was more experienced, with 10 consecutive title defenses against better competition. It made Foreman a 4-to-1 underdog. Their fight also matched the last two U.S. Olympians to win gold medals — Frazier in 1964 and Foreman in 1968.

Months before their fight — billed as “The Sunshine Showdown” — at the National Stadium in Kingston, Jamaica, Ali and Frazier couldn’t come to a financial agreement on a rematch. Frazier decided instead to sign for $850,000 and Foreman for $375,000. The fight was in Jamaica because it was mostly financed by their government.

“My trainers didn’t know I had this fear of Frazier,” said the 74-year-old Foreman. “They told me to stare him down, but I didn’t want to upset Frazier. At a press conference, Frazier said what he planned to do to me. After being egged on, I told Frazier to shut up. Right after I said it, I’m thinking, ‘How did that come out of my mouth?’ And you know what happened? Frazier did shut up.”

“Styles make fights” is a phrase often used in boxing, which in this case means the differences in Foreman and Frazier’s styles. And that meant trouble for Frazier. Foreman was the bigger man, just under 6-foot-4 and 217 pounds, while Frazier was listed at 6-0, 214.

“That meant George was going to punch down and he was very good at that,” said longtime boxing writer Jerry Izenberg, author of “Once There Were Giants: The Golden Age of Heavyweight Boxing.” “Frazier was never 6 feet, even if he had on elevator shoes. He was closer to 5-10. He always fought in a crouch, so in a sense, Foreman was fighting a 5-foot-8 guy, and that gave Foreman an advantage.”

Foreman’s camp planned for him to establish himself as the bully by not allowing the usually swarming Frazier to get close by pushing him out of range followed by a piston-like jab.

Foreman quickly established his presence by making a big swing (and miss) at Frazier immediately at the start of the fight.

“I missed him really good but then I got into boxing position,” Foreman said. “I intended to box and jab, box and jab.” 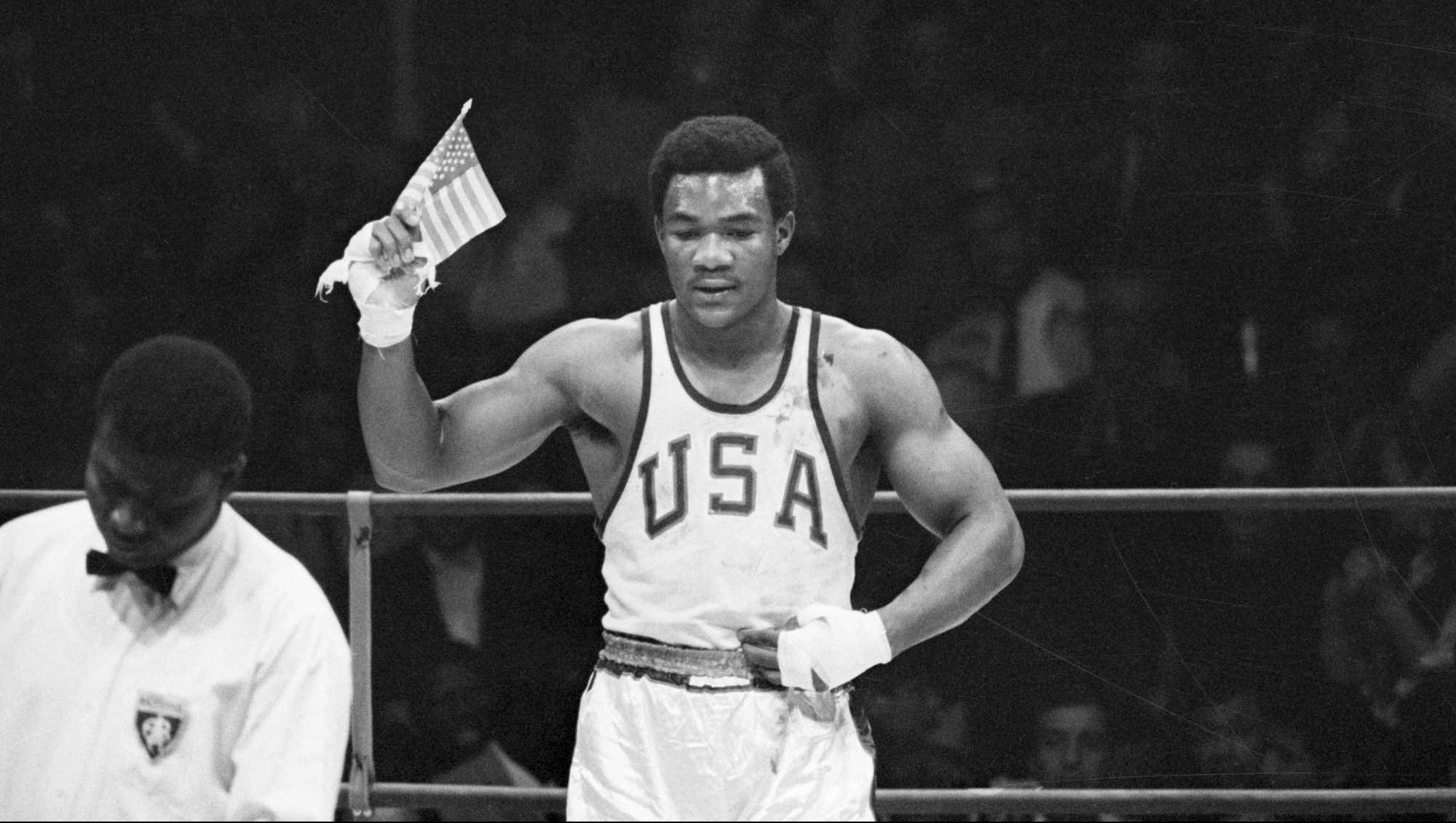 George Foreman: ‘If I had to do it all over again, I would have had two flags’Read now

Foreman’s well-laid plans would change. The usually crouching Frazier was up too high and it cost him dearly. At about 1:40 of the first round, Foreman stunned Frazier with a left hook, followed by a left-right combination and then a right uppercut that sent Frazier to the canvas, prompting Cosell’s legendary call.

“I was shocked [with the knockdown] because he was so tough, and I thought to knock him down it would’ve taken a grunt or strain,” Foreman said.

Frazier rose to his feet and took a mandatory eight count. And Frazier being Frazier (aka Smokin’ Joe), he went straight to Foreman, but a series of blows followed by another punishing uppercut sent him back to the canvas.

Frazier died in 2011 at age 67 after a brief battle with liver cancer. In his book, “Smoking Joe: The Autobiography of a Heavyweight Champion of the World,” Frazier talked about how Foreman’s pushing and jabs set him up for failure.

“That left me out there as a target for George’s fully extended uppercuts,” Frazier wrote in his autobiography. “It was like a deer caught in a motorist’s headlights; there’s nothing to do but wait for the impact. And that night, I didn’t have to wait long.”

“Frazier threw that famous left hook, and it grazed my head. It just missed me. It sounded like a bullet. I quickly thought about how that left hook had [Muhammad] Ali’s legs in the air and how that left hook folded Jimmy Ellis.” – George Foreman

Frazier rose a second time and received another eight-count. With only a few seconds left in the round, Foreman moved in and swarmed Frazier with a volley of blows that sent him down for a third time. The bell rang to end the round, but the referee continued another eight count because the rules made it mandatory that a downed fighter couldn’t be saved by the bell.

Foreman was clearly in control, but there was a brief moment earlier in the round that could have changed history.

The onslaught continued in Round 2. Frazier was still game as he threw two early left hooks, landing one, but Foreman staggered Frazier in the corner with an overhand right. Foreman continued to rain punches as Frazier attempted to escape via bunny hop, but Foreman landed a chopping right hand to his jaw for knockdown No. 4.

“I’m thinking ‘Maybe his corner will stop the fight,’ ” Foreman said. “I’d seen Joe Frazier go down before and get up. I’m thinking, ‘I better not wait around for this guy to get himself together, or I’m going to get into trouble.’ ” 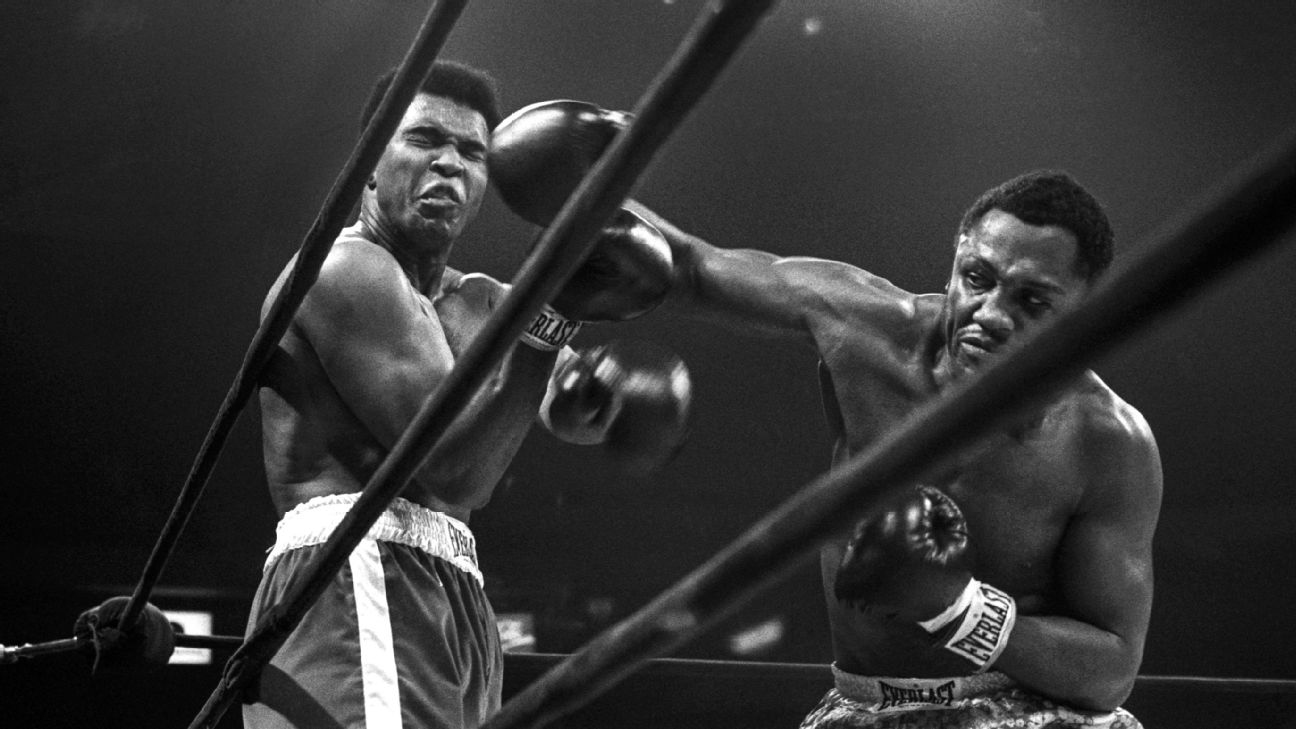 Shortly after Frazier rose for the fourth time, he went down behind a Foreman left hand, and he began bleeding from his lower lip. Somehow, Mercante allowed the onslaught to continue.

After another standing-eight count, and while Frazier was against the ropes, Foreman attacked. And as Cosell said on the telecast, “It’s target practice,” a right uppercut lifted Frazier off the canvas and dropped him to one knee.

“I’d been knocked down before, but Foreman was the only guy who’d really hurt me,” Frazier wrote in his book. “If you’re champion of the world, you don’t make plans for getting your butt whupped. When it happens, it comes as a shock. Like, ‘what the hell happened?’ ”

The fight was finally called, and Foreman was declared winner by technical knockout. He was carried out of the ring and through the crowd of 40,000 by his team.

“I’ve never told anyone this, but that was the happiest time of my life in boxing because I worked so hard to fulfill my dream and become heavyweight champion,” Foreman said. “It was the first and last moment I felt that.”

Winning the title not only shook up Foreman’s life, but it also staggered the world of boxing. Foreman’s victory meant the highly anticipated rematch between Ali and Frazier would be put on hold. Ali and Frazier II did happen the following year, but it didn’t have the same zeal as their first fight.

“Foreman’s victory was devastating because more people wanted to see Frazier against Ali,” Izenberg said. “When they did fight, neither wanted to be in the ring because neither one had a title. If I was there as a spectator, I would’ve walked out after four or five rounds.”

Foreman’s victory brought on a deluge of personal issues, from some deals made by his team that he didn’t approve, to litigation from a Houston promoter who claimed he had an agreement for a title fight. Foreman was also going through a divorce.

“I’m in an elevator at the courthouse and my soon to be ex-wife was in there with her three lawyers looking like she didn’t even know me,” Foreman said. “That was painful, and it added to my anger. Winning the title was like winning the lottery. One day you’re no one and the next day everyone wants to take advantage of you.” 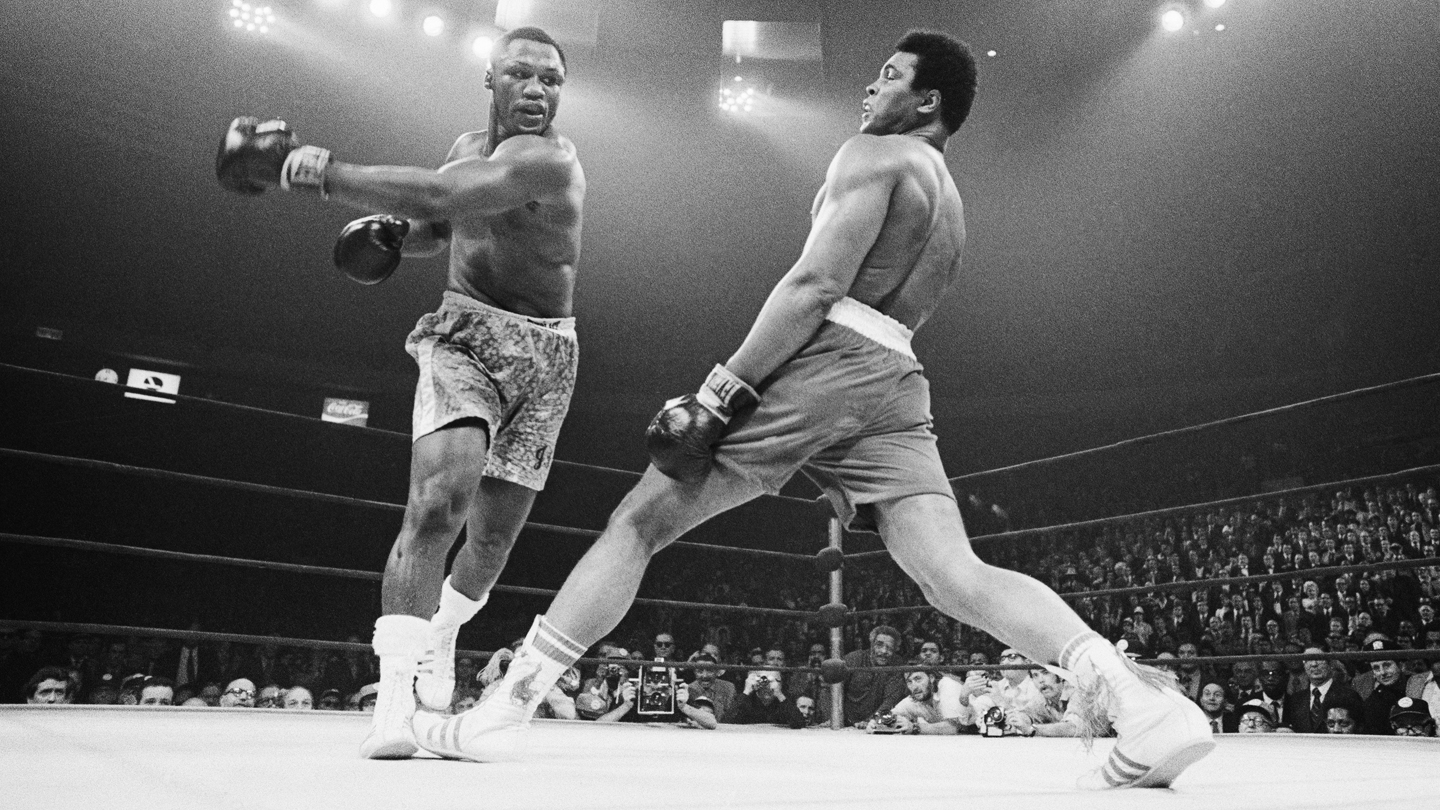 Ali-Frazier was more than a fight, it was part of my awakening as a Black manRead now

Foreman would only defend his title twice before losing to Ali in the historic “Rumble in the Jungle” championship fight in Zaire, Africa. Foreman took nearly two years off before returning to the ring. His return included six fights (including another KO of Frazier) until he retired in 1977 and became a born-again Christian after a loss to Jimmy Young.

Foreman would open a youth center, return to boxing 10 years later at age 38 to raise money for the George Foreman Youth and Community Center, regain the heavyweight title at 45, retire for the final time at 48 and sign a multimillion-dollar deal to become the pitchman for a kitchen appliance in his name.

Foreman now spends time serving as minister of north Houston’s Church of the Lord Jesus Christ, and on his ranch in Marshall, Texas.

His life has certainly made many changes since his victory 50 years ago. And it remains a time he’ll never forget.

“Winning the heavyweight title was a great moment,” Foreman said. “If something ever happens bad to me, like wrecking my car, I could always fall back and reminisce on that title. And if you’d ask why I’m smiling, it’s because of that.”