For the Howard women’s track and field program, the race is just beginning

Their success might come as a surprise to some, but not to the Bison

EUGENE, Ore. — Jessica Wright, Ameenah Saalih, Ozioma Scott and Jessika Gbai watched the women’s finals of last year’s NCAA outdoor track and field championships from the stands after their 4×400 relay team finished 24th overall, last among all qualifying relay teams at the national meet. A year later, the 4×400 relay team earned a top-10 seed at nationals and Wright and Gbai each qualified for individual events.

After a long season of competing at the nation’s premier meets, the four returned to Hayward Field on a rainy Thursday night to earn a spot in the NCAA outdoor track and field finals with a time of 3:30.60.

“It gave us a lot more motivation just to get out here and compete and just put it all on the line,” Wright told Andscape. “Just sitting in the stands last year, it just really gave us a push [in the] offseason to work hard to get you back to the stage.”

The Bison spent most of the race in fifth place until the anchor leg of the relay, Gbai, managed to pass and hold off LSU in the final 100-meter stretch to finish with a fast enough time to qualify at large.

“I just told myself, ‘God, please.’ Basically, we went in the race knowing that we had to either [place two top in our heat] or close enough to get [a time qualifier]. So I knew that my teammates in the first relays gave everything they had,” Gbai said. “I basically had to give the same effort and even if that meant passing people or putting us in a position to win, I had to do whatever it takes. Basically, I had to run it like it was the last race of my life.”

The performance is in line with a strong season for Howard’s women’s track program. Howard’s director of track and field David Oliver said he believes the three entries are the most for the program since the 1980s, and after qualifying for the finals, Howard will score at the national meet for the first time since 1990.

“It’s definitely a different feeling this year. Competing in an individual event is more exciting than just competing in the relay only. It’s a great opportunity,” Wright said. “I really want to compete to my best ability this weekend and just become an All-American just to see what I can do.”

Gbai and Wright’s individual entries are the first for the program since 2010, when Howard hurdler Landria Buckley qualified.

“I think it is outstanding for the program having three entries at the NCAA championship,” Oliver said. “These two young ladies have really been a backbone of the program in their years here and seeing them go from people that just make it to the regional level to now progress to the finals, it’s been amazing.”

Last season, Oliver said, the program didn’t run the 4×400 consistently and their success surprised him. Gbai and Howard’s other 4×400 relay members, Saalih and Scott, began their careers as walk-ons.

At the Mid-Eastern Athletic Conference (MEAC) Outdoor Track & Field Championships, he pulled Saalih out of the stands and assembled a relay team. They won at the conference championships and qualified for nationals, which set the tone for this season.

“When you go to nationals and make it as a time qualifier last year, it’s like they were just all happy to be here. All this is cool. We’re doing well as a relay,” Oliver said. “Then you show up this year and have the expectation after watching the finals last year in the stands and not having [it] go exactly how you wanted it to go. … They were able to get it done on the biggest stages now. Now they show up at the Texas Relays, break school records, conference records. Doing all these things because they expect to do well and that’s the leveling up mentality and the mindset.”

Howard’s 4×400 relay team entered the national conversation after it placed first at the Texas Relays, a premier track meet that showcased the top runners in the nation, with a time of 3:32.89. They set a MEAC and school record running 3:28.91 this season. Despite the disbelief of their competitors, Gbai believes they’ve earned all their accolades this season.

“I feel like people [are] just so surprised they be like, ‘Oh, Howard is here,’ or, ‘Howard is doing this.’ Even when we went to the Texas Relays, it was like, ‘Oh, good job for Howard. I wouldn’t expect this for them,’ ” Gbai said. “We still put in the same work as everybody else … I don’t really see much of a difference between me and my competitors. I feel like I’m just as good as them. I just have to, like, get out there and actually show everyone.”

As a senior, Gbai won the MEAC’s outdoor 200-meter title with a school-record time of 22.77 and will represent Ivory Coast at the World Athletics Championships. She credits her success to working hard, and even when she was a walk-on her freshman year looking to make a difference on the team, she knew she was capable with the right tools.

“I never really sat down and really thought about it. It’s just something that I knew I could do. I just needed the proper training and stuff like that,” Gbai said. “I just really had to believe in myself. So, I knew it was coming, just a matter of when.”

At the NCAA East Regional a season ago, Gbai competed in the 200-meter dash, finishing 15th overall with a 23.10 time, narrowly missing the cutoff to qualify for the national meet.

“[Oliver] always reminds me how I got beat at the line in the 200 last year and how I was crying. So that was something that kind of motivated me,” Gbai said. “I remember starting my summer last year, I had a time written out in my head because it was during the summer, you’re training by yourself. … I knew that no matter what it takes, I was going to get here.”

Wright was one of the first recruiting calls Oliver made when he took over the program in 2018, and she qualified in the 400-meter hurdles at the NCAA national meet. After the NCAA outdoor championship, Wright will continue her competition season after qualifying for the U.S. Track & Field Outdoor Championships.

“It’s a good connection because I was his first recruiting call. So, it’s like, I put my track career in [Oliver’s] hands, basically, coming to Howard because I just came for the coaching,” Wright said. “So, it’s a good feeling to make it here.” 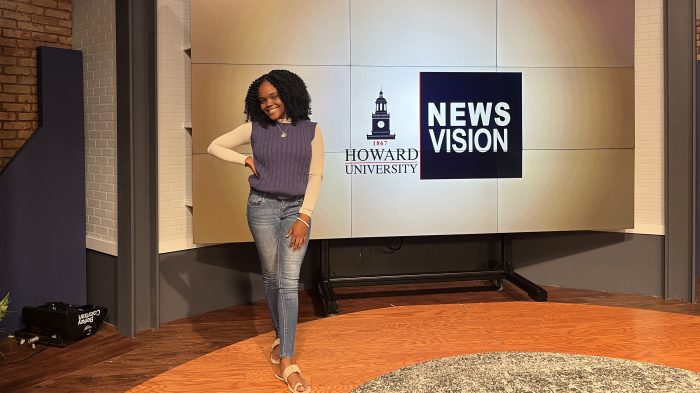 At Howard, I gained a sense of community and the camaraderie I had been longing forRead now

After sweeping the indoor-outdoor titles for the first time in school history, Oliver was named the meet’s most outstanding coach. The Bison’s recent success is what Oliver hoped for when he joined the program.

“When I got here, the goal is to get this program back to being a national-level program like it was when I was in undergrad,” Oliver said of the program’s growth. “I believe in extreme ownership. I think that’s the key, everything that has to do with track and field at Howard University. I got to be a part of it and have a major voice in it, and that’s just the hard work [paying] off.”

Oliver, who won bronze at the 2008 Beijing Olympics in the 110-meter hurdles, is a Howard alumnus who dominated the MEAC in the early 2000s and appreciates the strong history of historically Black colleges and universities (HBCUs) in track and field, calling the sport a great equalizer.

“It’s not anything other than what your mindset is and how seriously you’re willing to be. Every school has a track [and] good, competent coaching, so it really just boils down to the type of athletes, and can you get them to believe and buy into themselves,” Oliver said. ”[HBCUs] have dominated track and field throughout history. We’ve always represented in this sport, and being an individual sport is what is the great equalizer.”

HBCUs have 20 entries in the NCAA national meet. North Carolina A&T leads with 13 entries, followed by Howard with three, Coppin State with two, and Florida A&M and Arkansas-Pine Bluff each have one. Since men and women run on separate days, the HBCU track community is cheering for each other throughout the meet.