For Mo’ne Davis, her first year at Hampton was a winner, though it ended abruptly

The former Little League star, now back home in Philadelphia, was helping lead her team to its best record in years

The coronavirus pandemic has Mo’ne Davis at home in Philadelphia doing things she doesn’t normally get a chance to do, including catching up on rest and building puzzles. The former Little League legend’s freshman softball season is over unexpectedly at Hampton University.

This comes after the Big South Conference announced it would cancel all spring athletic activities due to the coronavirus pandemic. Like most college athletes across the nation, Davis and the Lady Pirates were devastated.

Before their season came to an abrupt stop, the softball team was off to its best start in more than 10 years. The women were 15-4 and believed they had not come close to reaching their full potential.

“We had something special and it was one of the best things I’ve ever been a part of. We didn’t really get to show everything we had,” said Davis. For someone who just had their season canceled, Davis didn’t sound as upset as one would think.

“It’s one of those things where you can be frustrated and disappointed, but it’s for a good cause,” she said. “You don’t want anyone’s health at risk but obviously for our season to end like that, it’s pretty sad.”

In the fall, head coach Angela Nicholson noticed Davis had exceptional hands in the infield. Her hard work and infield skills earned her a starting spot at second base.

Hampton’s softball team had an unusual makeup. Of the 20 Lady Pirates, 11, including Davis, were freshmen, eight were sophomores and just one was a senior, Brianna Anderson. And that’s why the season meant so much to the women – they wanted to send their senior captain off with a conference title.

“We really wanted to do it for Brianna, that’s something none of us had ever accomplished and to give her her first and last Big South title would’ve been really special,” said Davis.

With so many underclassmen on the team, Anderson thought her role as team captain would resemble that of a babysitter. To her surprise, the players were mature and focused. It was a refreshing feeling for Anderson, who had been a part of losing teams the previous two years.

“We’ve had people on the team in the past that just haven’t cared,” Anderson said. “But after many team meetings, it was clear we were all focused on one goal and we were ready to play.”

Their head coach was happy with the enthusiasm, but even she had trouble predicting how the year would go.

Nicholson was wrong. After the Lady Pirates opened their season Feb. 8 by thrashing North Carolina A&T, their next opponents were much tougher. During the East Carolina Pirate Clash, Hampton played George Washington University and DePaul University. Both teams sat atop their respective conference preseason polls. In two games against George Washington, the Lady Pirates dominated, winning by a combined score of 20-5. Against DePaul, the games were tighter, but again Hampton prevailed, winning 4-3 and 8-7.

After the wins, Nicholson knew she had a team unlike any in recent memory. And so the Lady Pirates began to roll, their confidence grew with each victory until the season was halted March 18, when the Big South made its announcement.

All of the students are now at home, but the team’s group chat has been booming. It’s easy to tell that they miss each other, said Davis. Nicholson had each player send her favorite memory of the team and the responses have emotionally torn at her.

“It’s so awesome. They all have different memories but the biggest thing is how much of a family we are,” said the Lady Pirates head coach. “Everything is positive, and it just makes me smile from ear to ear.”

The strong bond the team shares comes from the players’ passion for the game. Each woman has a different role on the team and they all lead in their own way. For captain Anderson, she’s the vocal leader and was always encouraging the team to be better. Davis was verbally supportive as well, but usually she’s a reserved, quiet leader. She’d much rather let her actions speak for her.

In class during the year, she fit in like any other student. Most of her professors didn’t even know who she was until students introduced themselves early first semester.

“For her to have accomplished as much as she has, she never talks about herself,” said Scripps Howard adjunct professor Deborah Flippens. “She handles herself like a professional and I think that’s why when she talks, people listen.”

“I don’t know where it came from. I think I just like to see how people are first before fully opening up and being myself,” she said. “But once I’m open, people get to see the fun, crazier sides of me, which is always great.” 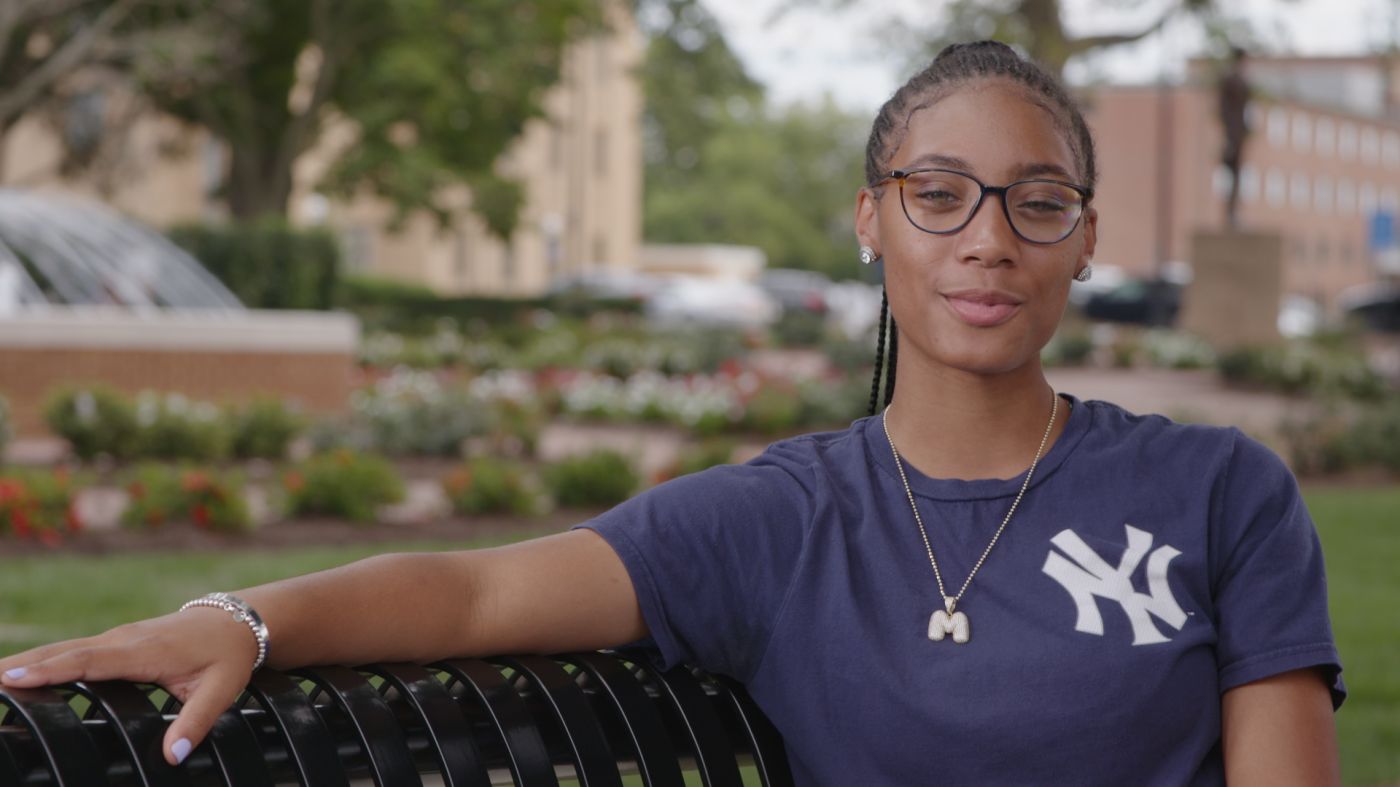 In her first month at school, Davis said, she and her roommate hardly talked. There were numerous occasions where both students would be in their room and it’d be quiet enough to hear ants crawling. In the locker room, she maintained the same demeanor.

There was even a moment she recalled when her entire team was laughing and, as Davis was quietly putting her equipment away, one of her teammates said, “We have a quiet one, can’t wait ’til she opens up.”

And sure enough, she did. Now, her teammates say her best kept secret is her incredible sense of humor.

“The world doesn’t know how funny she is. She always makes for a really good laugh,” said Vanessa Arroyo, another freshman on the team. “You never know what to expect when you meet someone so famous, but Mo’ne is a really great person, and after she opens up, she’s not quiet.”

Off the Field and In the Classroom

None of this mattered to her when she decided to be a Hampton Pirate, because her goal was to be a regular student.

“If you did not know who Mo’ne was before coming to Hampton, you wouldn’t know,” said Nicholson. “This kid, I can’t say enough, she’s so humble and doesn’t say a lot, but when she does speak, it’s truly impactful.”

Through her first semester, Davis’ quiet nature has helped her blend in as just another student.

“Everyone’s been so cool, no one has ever freaked out or made a big deal out of who I was, which is nice.”

One of the deciding factors in Davis’ decision to attend Hampton was the Scripps Howard School of Journalism and Communications. She visited Hampton on a Saturday during homecoming in 2018. Hampton’s homecoming always shines the brightest when the weather is nice. People flock to the student center as music roars inside the facility. Outside, there’s a bazaar full of merchandise, food selections, an alumni tailgate and the football game that’s packed with fans. The day Davis visited, rain poured as vendors, alumni and students alike were forced inside the student center.

“The weather was horrible, but Dean Plummer opened up the school when she didn’t have to and showed me around,” said Davis. “I got to see how Scripps took care of their students and that meant a lot to me.”

Since then, the two have remained close.

With the season gone, she longs to see her team again. Davis believes this season’s team has unfinished business.

Though she is back in Philadelphia, her mind hasn’t stopped thinking about Hampton’s softball team next season and beyond.

“I know we shocked people this year, but I think we’ll really shock people next year,” she said. “We’re going to come out hungrier and we’re going to do a lot of special things.”

Randall is a 2019 Rhoden Fellow and a senior journalism and communications major from outside of Chicago and Columbus, Ohio. He is a former Bloomberg intern and is the sports editor for the Hampton Script. He 100% believes that “Avatar: The Last Airbender” is the greatest cartoon of all time.