For Beyoncé’s Homecoming scholars, their scholarships were lifesavers

Her honey blond hair was like a halo of gold under the stage lights.

An Egyptian cape wrapped around her body. She mesmerized the audience.

Beyoncé’s groundbreaking performance at the 2018 desert concert paid homage to HBCUs by showcasing black culture and talent. “When I decided to do Coachella, instead of me pulling out my flower crown, it was more important that I brought our culture to Coachella,” Beyoncé said in her Netflix film Homecoming.

Beyoncé made history for being the first black woman to headline Coachella. During that performance, she announced the Homecoming Scholarship Awards Program under her BeyGood initiative. She offered $25,000 each to students at Xavier University in Louisiana, Grambling State University, Tuskegee University, Morehouse College, Wilberforce University, Texas Southern University, Fisk University and Bethune-Cookman University.

I attend Xavier and I was one of the recipients. And I’m graduating on May 11! 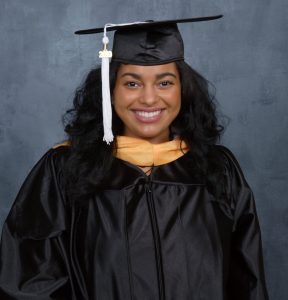 It felt like just yesterday I was dancing in the living room with my father as Beyoncé performed “Love On Top” at the 2011 MTV Video Music Awards. We both smiled at each other, in awe of Beyoncé’s talent as a visionary and entertainer. Every time we heard her voice over the radio or when we blasted her music in our house, it gave us goose bumps. My dad and I always connected through music. When he died my junior year in high school from cancer, I was in disbelief. But it was Beyoncé’s music and presence that taught me to stay strong and that no dream of mine was too big.

I decided to leave my hometown of Boston and attend Xavier University of Louisiana to reconnect with my dad’s roots and carry on his legacy in New Orleans, where he grew up. My dad taught me how to write and reminded me that everyone has a story to be told. When I stepped foot on my HBCU campus, I hit the ground running by getting involved in journalism.

Two years ago, I had the chance to meet Beyoncé at a party that her sister Solange was hosting for NBA All-Star Weekend in New Orleans. I thanked Beyoncé for her music and for getting me through losing my dad. She responded, “I’m so sorry for your loss, and thank you for being such a supportive fan.”

With each passing year, it became increasingly difficult for my newly single mom to cover the cost of my out-of-state tuition. But last summer, my worries faded away. I was interning in the sports department at the Tampa Bay Times and saw the news on Twitter. I saw a “Congratulations” tweet and realized I was one of the winners. I was speechless, and couldn’t believe the announcement was real.

I prayed on this. Waited.
And the dream came true. Thank you @Beyonce and @XULA1925 for believing in me. And thank you to @jemelehill who my essay was about. Thank you for being an inspiration to black female journalists like myself.

Y’ALL I AM A BEYONCÉ RECIPIENT pic.twitter.com/1KEQCUMDHI

The outpouring from the public was something I had never seen before on my social media. Other recipients said they felt that same love. The Tuskegee winner, Caleb Washington, screamed when she saw the news on Twitter. She was interning at Goldman Sachs.

Caleb Washington, a senior from Demopolis, Alabama, majoring in sociology, is among the eight recipients of the @Beyonce Knowles-Carter and @BeyGood's $25,000 2018-19 Homecoming Scholars scholarship award.https://t.co/ko0XTexUvo pic.twitter.com/Kx0wAyMkaq

Washington transferred from the University of West Alabama during her junior year. She played basketball and was on an athletic scholarship. But she gave it up, the sport and the scholarship, to focus on getting into law school.

“The Beyoncé scholarship was like a safe haven because it replaced the athletic scholarship,” she said. “Tuskegee has prepared me through the trials and triumphs of operating and managing your day-to-day. At an HBCU, it prepares you for corporate life.”

When Washington watched Beyoncé’s performance, she felt that it was an honor to be black. “I felt so proud. In a sense, I felt validated to be a soon-an-HBCU grad and be part of this culture,” Washington said.

If it wasn’t for Beyoncé’s scholarship, recipient Cletus Emokpae said, he would have not received his master’s degree in mass communication and would have been homeless. The Grambling State alumnus got into a car accident the day before he heard the scholarship news.

“I called my mom and broke down and cried because she understood, after a while you get tired of always having to struggle,” he said. “At what point does the grind start to really showcase the fruits of your labor?”

For Emokpae, this scholarship finally showed him that his hard work was paying off. When he first got to Grambling, he could not afford housing.

“One of my professors took me in just so I had a place to stay to get my work done,” he said.

“People can say a lot about Gram Fam, but when it comes down to it, when you need somebody, they will be there for you. No questions asked.”

As Graduate student especially at an HBCU, this is huge🙏🏿 Graduate students are the least supported, least funded when it comes to paying for a higher education. @Beyonce thank you, because if you only knew what this year was like for me to have to pay for school.

By attending an HBCU, “it’s like a homecoming every day,” he said. Emokpae was proud to see how Beyoncé incorporated a band into her performance.

Beyoncé explains in her documentary that she handpicked her band members and dancers to make sure it felt like a homecoming, her HBCU.

“I wanted all of these different characters, and I wanted it to feel the way I felt when I went to Battle of the Bands, because I grew up seeing those shows, and that being the highlight of my year,” Beyoncé said. Her father attended Fisk University, and as a young artist she mentioned that she grew up rehearsing at Texas Southern and Prairie View.

Beyoncé has touched so many lives through her music, projects and philanthropy and as a businesswoman altogether. From this scholarship alone, one woman impacted eight different lives. As a result, we will always be connected and grateful for her support.

Homecoming has only increased my respect for Beyoncé. I continue to sing her songs that I used to belt out with my dad as a little girl. The only difference is, he’s looking over me as my guardian angel.

Allana J. Barefield is a senior mass communication major. The Bostonian is a student representative for the NABJ Sports Task Force, and loves writing feature stories because sports are more than just stats.