To be an ally, one must first understand the basic mission of the movement

The apology came before 9 a.m. Thursday, complete with a stock photo image of white and black hands interlocked in a symbol of togetherness.

Drew Brees needed to let the world — and more importantly, his teammates, his friends and the black community at large — know that he was sorry.

“It breaks my heart to know the pain I have caused,” the Saints quarterback wrote in a lengthy Instagram post, less than 24 hours after his insensitive words ignited a firestorm of criticism online and in the streets of New Orleans. Residents of the Big Easy protesting the death of George Floyd at the hands of Minneapolis police also denounced Brees in a chorus of expletives.

“… I recognize that I am part of the solution and can be a leader for the black community in this movement. I will never know what it’s like to be a black man or raise black children in America, but I will work every day to put myself in those shoes and fight for what is right.” 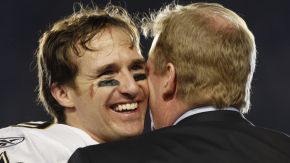 The shame of it is, Brees already had an opportunity to show how, as a white man, he can be an ally off the field. And he blew it. Given a chance to embrace his responsibility and role as a leader during these troubled and critical times, he instead made the same egregious mistake many others have in the past four years: confusing peaceful protest as being in conflict with patriotism.

“I will never agree with anybody disrespecting the flag of the United States of America,” Brees said in an interview Wednesday with Yahoo Finance.

To be an ally, one must first understand the basic mission of the movement.

In many ways, the quarterback’s credibility issue is the same blemish that stains the NFL shield. His sentiments are no different from what league owners themselves expressed four years ago when Colin Kaepernick first took a knee in peaceful protest of police brutality and the systematic oppression of people of color. And it’s why the NFL was widely ridiculed for its statement in the wake of Floyd’s death.

The same organization that forced out Kaepernick now believes there is “much more to do as a country and as a league. These tragedies inform the NFL’s commitment and our ongoing efforts. There remains an urgent need for action. We recognize the power of our platform in communities and as part of the fabric of American society.”

Action is all that matters now.

The world is watching. Now, more than ever.

It isn’t enough for the NFL to say that it is “committed to continuing the important work to address these systemic issues together with our players, clubs and partners” without also acknowledging that it has a credibility issue. Its whitewashing of Kaepernick’s nonviolent protest will forever be a stain on the shield.

To their credit, the league and individual teams have donated millions in recent years to various initiatives and community-outreach programs, and in January 2019, the NFL created its social justice platform, Inspire Change. But the timing of it — immediately following a football season overshadowed by player protests during the national anthem — sparked well-deserved skepticism.

The NFL can’t be blinded by the bottom line at the expense of social progress if it wants to prove it truly understands its power in communities. It isn’t enough for billionaires to simply donate money. Their financial support needs to be tied to causes that are directly linked to the specific conditions of the black community — police brutality, social justice and policy reform.

The league must also understand that addressing “these systemic issues” also means taking inventory of its own power hierarchy — a sea of mostly white faces. The dearth of black owners, general managers, personnel executives, head coaches and even black executives within the league office is an issue decades in the making. And yet even with the NFL’s attempts at leveling the playing field, most notably through tweaks of the Rooney Rule (the most recent proposal coming last month), the league’s power structure reflects the same racial inequities that exist in society.

(Regardless of what Denver Broncos coach Vic Fangio may have assumed.)

Lip service no longer is being tolerated. Especially within the NFL. The Brees backlash was proof of that.

Raw emotion erupted in forceful waves of social media scorn, as the future Hall of Famer’s own teammates joined a chorus of critics that spanned sports leagues. Michael Thomas, Ed Reed, Mark Ingram, Cameron Jordan, Doug Baldwin, Jamal Adams, LeBron James and Stephen Jackson — a close friend of Floyd’s — were among the many athletes who expressed confusion, dismay or anger over Brees’ insensitivity.

To many, the deaths of Ahmaud Arbery, Breonna Taylor and Floyd — and the ensuing protests that left a trail of tears and tear gas in their wake — signaled a tipping point in America. A reawakened consciousness. An acknowledgment of the ugly atrocities of our nation’s history and their continued consequence for communities of color. And, moreover, a willingness to understand the current realities of what living while black looks like.

But Brees’ unsympathetic words Wednesday were yet another reminder of how easy it is to profess solidarity with black people without fully grasping the scope of what’s truly at stake.

“I am sick about the way my comments were perceived yesterday,” Brees wrote near toward the end of his apology. “But I take full responsibility and accountability.”

It remains to be seen whether these black deaths at the hands of police and these particular protests will be the catalyst for police and policy reform. But this is a teachable moment for Brees. And the NFL.

The foundation of the league is built on the backs of black athletes. And Brees is a white Super Bowl champion quarterback for a team in a predominantly black city.

Woeful ignorance will no longer go unchecked in the NFL.

Kimberley A. Martin covers the NFL for ESPN.