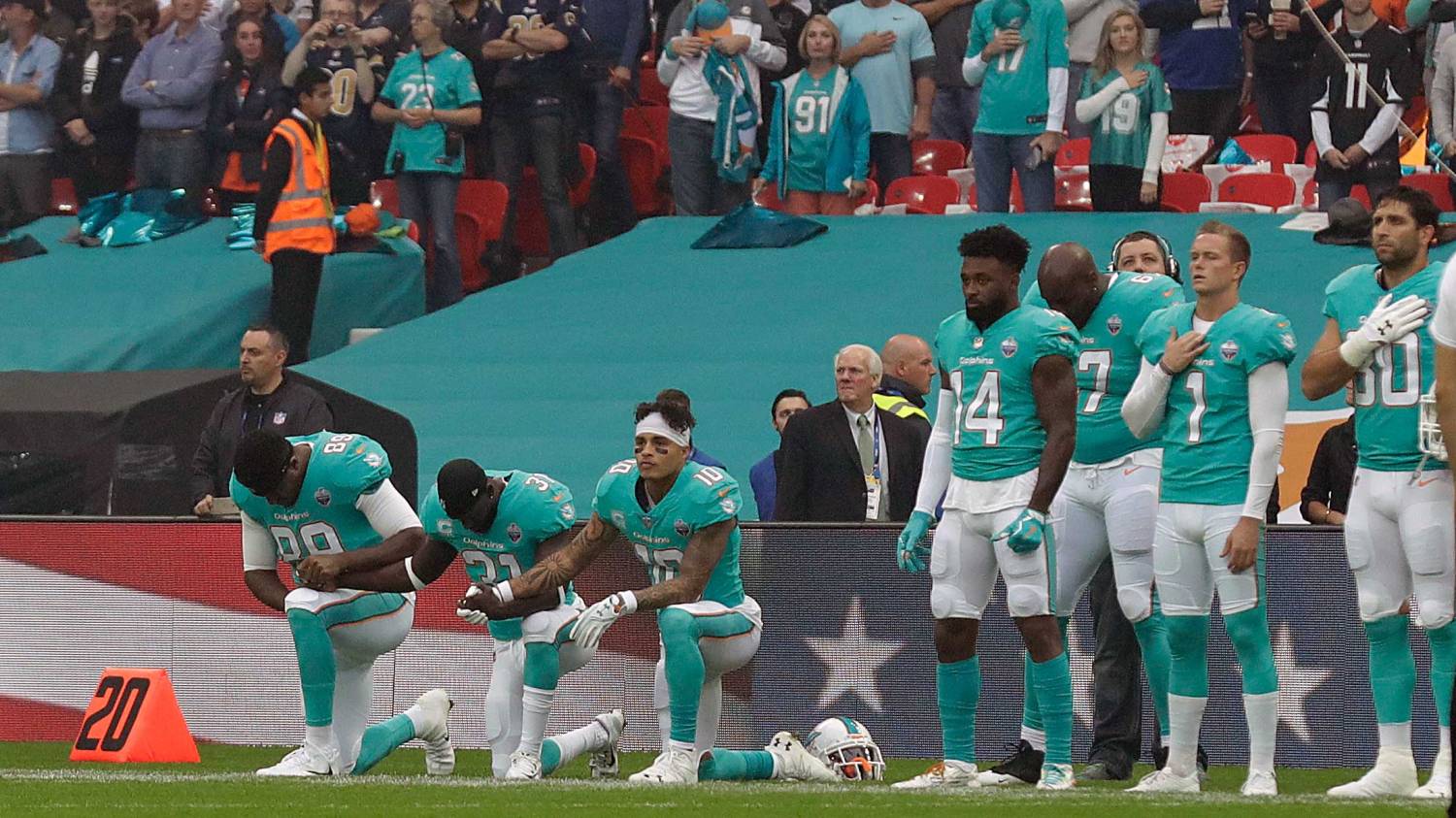 Dolphins’ Kenny Stills: ‘We have to get people to understand what racism is’

Receiver, in his own words, shares why he remains on the frontline of protests

Wide receiver Kenny Stills is in his fifth NFL season, his third with the Miami Dolphins. While most NFL players largely backed off on protesting during the national anthem last week, Stills was among three Dolphins players who remained defiant. Inspired by former San Francisco 49ers quarterback Colin Kaepernick, who last season ignited an ongoing national discussion about race relations by first sitting and then kneeling during the anthem in an effort to draw attention to the oppression of black and brown people in the U.S., Stills has done considerable work off the field in South Florida in hopes of improving the relationship between police and the African-American community. Stills also is a leader in the still-evolving new civil rights movement that has become as much a part of the NFL as the playing of the anthem itself. After practice Wednesday at the Dolphins facility in Davie, Florida, Stills sat down with The Undefeated to share his story.

This is very important to me. If it wasn’t, I wouldn’t have done the things I’ve tried to do. I’ve definitely been frustrated. I’ve had a lot of emotions, just about a lot of things I’ve seen, about what’s going on out there. When you see some of the problems we have in the country, and things that have happened [historically], all people should be frustrated and want things to improve. Everyone should want to see positive change. Everyone should want to do everything they can to come together. And in a league that’s majority African-American, these are issues that are really important to our community.

When I saw what Colin did, yeah, I felt he had to be supported. That’s why I also did [protested during the anthem]. But there’s so much more I want to do. That’s why I did [ride-along tours]. That’s why I went out there and talked to the police to see what we can do to make things better. There has been so much of it [divisiveness], I want to try to help bring people together. We should all want more unity. With everything we [some players] have tried to do in the community and with the police, I think we’re making a difference.

When you get out there and meet with people and get them talking and trying to work on the real issues, you can start to see positive things happening. If you can start to change ideas, or just get people to be more comfortable around each other, that’s real progress. That doesn’t mean you just stop. You can’t stop working. There’s still a ton of work to do. You know we’re not going to get to where we need to be quickly. It’s going to take time. You know that. But you just try to do what you can to keep making a difference because you know how important this is.

Obviously, you have to do your job. You know you have this great platform because you’re an NFL player. There are some great players and great coaches, just great people in the NFL, but there’s also a negative [connotation] with the NFL because of the trouble some guys have gotten into and we are famous. So it works both ways.

With the protests, some people have taken it out of context. But with the work some guys are trying to do now, I think that reflects well on the shield. I know I’m very proud to play in the NFL. I know I’m proud to do everything I’ve done in the league and contribute to my team. Everyone wants to do well and get paid [in March, Stills signed a new contract that includes almost $20 million in guaranteed money]. You have to do that to stay here. But there are other important things. You can understand that, do your job and also try to make things better for everyone [off the field].

The NFL has such a big platform. And we know if the NFL supports something, if it supports a charity or a cause it believes in, we know how much attention those things get. The league does support so many things. The league reacts to so many things and then acts to help. That’s great. But the league didn’t react quickly to what we’re doing. It’s starting to react now because people are giving up their DirecTV and their season tickets. Now, the league is flustered. There’s concern out there because of the fan reaction. So the league wants to try to do something. There’s dialogue now [between ownership and players] about why these issues are important to us and what we’d like to see happen. But it didn’t have to get to this. This could have been avoided from the very beginning.

I’m proud of what the guys have done recently standing up for ourselves. You can see that by doing what we’ve done, the conversation that was started, it’s led to the potential of something happening with the league to help us. No matter what happens with the league, we still have to keep going. What I’m trying to do here in the community is not only help with community and police relations. I’m trying to help with race relations in general.

We have to get people to understand what racism is. It sounds simple, but a lot of people don’t really understand what it is and how it affects people’s lives. We need to get people to diversify their friend groups. If we can get more people together of different races, different backgrounds, we can help to build those relationships and start to understand each other. By understanding other people’s perspectives, maybe you’ll eventually show some type of empathy for their experiences and where they come from. We’ll start trying to do that in our building. There are some exercises that we’ll do with RISE [the Ross Initiative in Sports for Equality, a nonprofit organization founded in 2015 by Dolphins majority owner Stephen Ross to improve race relations and drive social progress through sports] here, and then see if we can use some things we learn to help in the community. It’s all about making that effort any way we can.

When I put that out there [on Twitter] about more guys not supporting Kaepernick, I was frustrated, I was curious. There were a lot of different emotions I was feeling. I was really putting that out there for other players. And I didn’t get any responses from players because, well, who knows? I know they saw it. We know there are problems. There’s no question about that. So if you don’t do anything, is it just because you think you can’t change anything? We can’t have that attitude.

It’s frustrating that it takes the president to come out and call us SOBs or whatever for people to stand up for themselves. When this stuff first started happening with Kaepernick, we [NFL players] should have all been there to have his back. Every quarterback, every defensive player who played against him, everybody, should have been there to say something in support. If that happened, maybe this whole thing could have gone a different way. Who knows what would have happened? The one tweet that I was frustrated that didn’t get mentioned a lot was the one where I called out the league as well. Whether you agree or disagree with what Kaepernick has done, he’s opened a lot of people’s eyes. You can’t deny that.