From a cow print two-piece to Schiaparelli couture, her wardrobe is as expansive as her music

Even though she consistently calls herself a rapper, the music industry doesn’t seem to know how to think about Doja Cat.

In April, her song “Kiss Me More” featuring SZA won a Grammy for best pop duo/group performance. Two weeks later at Coachella, she debuted “Vegas,” a remake of Big Mama Thornton’s “Hound Dog,” for Baz Luhrmann’s Elvis. In May, she won Billboard awards for best R&B album, R&B female artist, top viral song and R&B artist. And she’s got six nominations in both R&B/pop and hip-hop categories at the BET Awards later this month.

For guidance on whether Doja Cat is a rapper venturing into pop, an R&B artist doubling in rap or someone who defies genres altogether, it helps to look at how she presents herself, both in videos and onstage.

Let’s start with her stage name, chosen because she loves cats and after a strain of marijuana. “I was heavily addicted to weed and weed culture, so when I began rapping, I thought of the word ‘doja’ and how it sounds like a girl’s name,” Doja Cat (government name: Amala Dlamini) told Dazed in 2018. 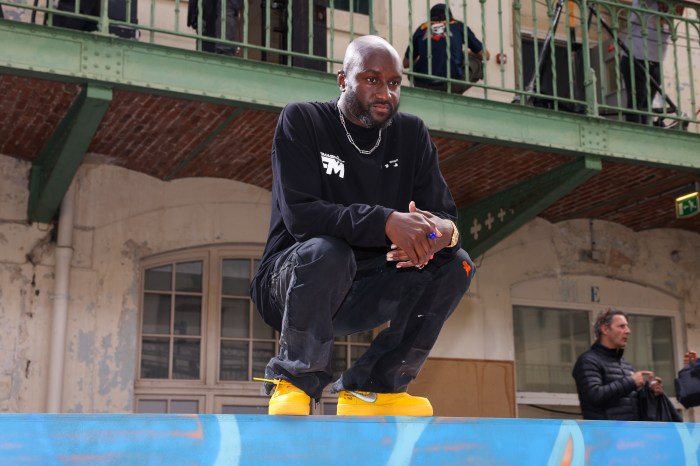 The name is coy and playful yet sexy, much like her persona in her music videos. Early videos like “Go To Town” relied heavily on verbal innuendo and the visual hint of sexual domination (she rolls around in a latex skirt holding a whip), compared to the overt braggadocious of rappers such as City Girls or Megan Thee Stallion. In her viral 2018 hit “Mooo!,” Cat twerks while eating a cheeseburger and wearing a cow print two-piece set she bought on Amazon. “He said the body unbelievable/can’t trust a big butt and a Gemini,” she playfully rapped on 2019’s “Juicy,” dressed like various fruits. The video is cartoonlike with highly saturated colors — still very tongue-in-cheek.

To be clear, Doja Cat shows her butt a lot in her music videos, offering up the sex appeal we’ve come to equate with a lot of female rappers. But it happens in the same vein as the sexual innuendo in her lyrics — it’s just, well, goofy.

By 2020, she’s traded in the fruit and animal costumes for a multicolored halter minidress with a Malibu Barbie feel in the video for “Say So,” a disco-inspired pop song from the album Hot Pink. The video for “Like That” uses anime graphics, a nod to her love of video games, as she continues to wear latex that shows a lot of skin. The music video for “Streets” follows, a more sober-sounding R&B song coinciding with the #SilhouetteChallenge on TikTok. The video opens with Doja Cat as a mannequin in a store window showing off her silhouette in a dramatic Christian Siriano floor-length gown before transforming into a sexy spider, trapping her taxi driver, Kofi Siriboe, in her web. Doja Cat isn’t goofing around anymore, she’s more sure of herself as a bona fide performer.

In 2019, Brett Alan Nelson started working with Doja Cat as a stylist before transitioning to being her creative director. Nelson said he was familiar with the “Mooo!” video but didn’t know much else about her at the time. “The first time I saw it, I was like, ‘Who is this visual genius that had no budget?’ She did that on her own with a green screen in her bedroom and it’s hilarious.”

Nelson’s first job for her was the 2019 BET Awards — and it was her first red carpet. “I remember we were texting a lot and she was like, ‘My next album is called Hot Pink and I’d really love to do something pink and girly but sexy and fun,’ ” he said, recalling their conversations. Nelson created a moment on the red carpet that was tongue-in-cheek: an artist named Doja Cat in a yarn ball dress created by the designer duo (and his friends) The Blonds.

“There is a space that’s hungry for someone to not fill the space of any of these named artists but to take what women, from Nicki Minaj to Lady Gaga to Katy Perry to Madonna to even Cher, have done and mixing all of these huge impactful women in the music industry and like, molding them into one,” Nelson said. “That is who Doja Cat, in my eyes, is. She can really do any type of genre with her music, which really allows us to have a lot of fun.”

Because Nelson joined Doja Cat’s team just as she was gearing up to release Hot Pink, he was still figuring out who she was. He said he pulled from her existing work but stressed he wanted a different level of artistry, combining sex and comedy. “I wanted people to look at her and laugh with her but also be sexually stimulated by her,” Nelson said. “It was fun, it was colorful, it was pop-y. It’s like those cult classic movies. You look at it and you’re like, ‘What am I looking at? This is really fun and I like it.’ ”

“Really fun” is a good way to describe Doja Cat’s Coachella performance. She’s an obvious student of Nicki Minaj — a theatrical and animated rapper who commands the stage. Nelson, who has worked with Nicki Minaj and Doja Cat’s team, including choreographer Cortland Brown and music director Darion Ja’Von, brought to life a “multilevel, multi-world video game.” Nelson said in initial conversations about her performance, she wanted something with an industrial feel that referenced surrealist artist Salvador Dali. From there, Nelson pulled from the 1927 German film Metropolis.

“I took the idea of knowing that she’s such a massive gamer, and the idea of Metropolis and we built this video game world,” Nelson said. “In the very beginning of the performance before there were any lights or any sound, you heard the PlayStation sound go off.”

In the first level of the video game, Doja Cat and her audience travel through an asteroid of exploding female sculptures. She’s wearing an asymmetrical stringy custom piece by designer Caroline Reznik resembling ethereal alien glitter snot, and the final song in that act included a shout-out to Nicki Minaj. On the second level, Doja Cat changed into a hypnotic black-and-white matching set from I.Am.Gia. while her background dancers surrounded her wearing apocalyptic bright red contacts. Once Doja Cat reaches level three of the game, she’s singing “Streets” in a low, raspy register in a custom blue Dolce & Gabbana bodysuit encrusted with Swarovski crystals.

After defeating the final level, which Nelson called “god mode,” Doja Cat is ready to party.

“God mode was our quote-unquote hell,” Nelson said. “Everything started to explode then she brought us back to life.” She sang “Kiss Me More” and “Like That,” “bringing back the tongue-in-cheek quirkiness that we’re still here,” he said. Before she wrapped her set, she changed into rock ’n’ roll Doja Cat, wearing a custom look created by Roberto Cavalli’s creative consultant Fausto Puglisi. She’s wearing acid neon separates paired with purple over-the-knee boots and dances around the stage while an electric guitar squeals. If all the world’s a stage, Doja Cat is playing every single musical character in it.

When Doja Cat tried on her gown for the 2022 Billboard Music Awards, Nelson said, the two of them exchanged a smile. “The minute artistic director Daniel Roseberry took over Schiaparelli [in April 2019], I begged for a moment for Doja Cat,” Nelson said. “There is such an artistry with what Roseberry is doing. He’s really filling the space of what [British designer Alexander] McQueen was doing. He’s making art pieces for the runway.”

Doja Cat attended the award show wearing a black gown with a velvet corseted bodice, tulle train and spiked ends extended above her sheer tulle underlay flashing gold Agent Provocateur nipple covers. She complemented the dress with Bijules nail rings with gold fingers on them to match her heels with gold toes with silver nails on the toe. On her ears, she wore gold ears adorned with their own set of bejeweled earrings. She carried a Saturn-shaped handbag. Doja Cat’s hair was swept up in a high ponytail with the ends flipped up, and her baby hairs were swooped.

That red carpet look felt like a natural progression of what we know about her. She’s inspired by art and treats her body like a piece in a performance. Nelson often credits Dali as an inspiration. Dali and designer Elsa Schiaparelli’s friendship resulted in iconic and often-referenced collaborations.

Because Doja Cat is a millennial, she is able to have a wider frame of reference to pull from, thanks to the internet. She’s exposed to so much more. “The evolution of style, especially for rappers, has changed dramatically because of the influence and the impact of a stylist who is really an image builder and creator,” said Elena Romero, a professor at the Fashion Institute of Technology in New York. “Earlier hip-hop artists, for example, were dressing themselves. There were no music budgets, no major stylists being able to have access to designer and luxury brands. Rappers wore what was popular in their neighborhoods, influenced by people they idolized. We’ve seen a complete transformation of street style.” 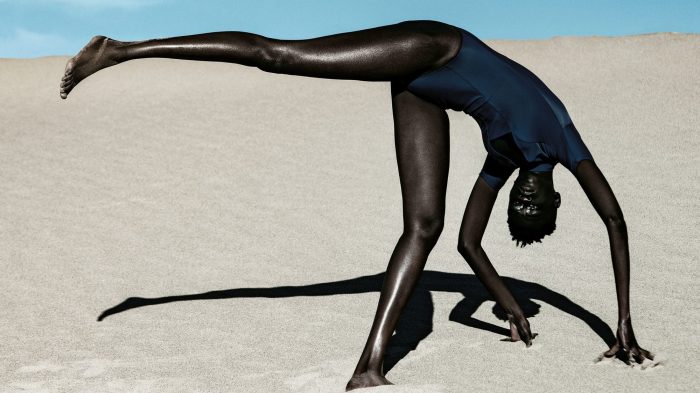 Ideas of what a rapper is supposed to look like or perform like are antiquated notions, according to Romero. “Today, the lines are extremely blurred. It’s not so easy to be able to say, well, this is what a rap artist looks like,” she said. “Black female artists have been pigeonholed to have to fit into a box. … When you think about one of the more recent hip-hop artists to have moved in the pop genre, Nicki Minaj never gets the kind of credit she deserves for her wardrobe choices. So you see where the influences are coming from, it’s not hard to see, I just think she gets shortchanged because she’s a Black woman.”

Romero said people only understand what they can categorize. “Earlier hip-hop artists were wearing denim jeans and T-shirts, tracksuits and velour suits and that has completely evolved to wearing high-end couture fashion. So is that no longer hip-hop? No, of course it is. It’s how we wear it, it’s how we interpret the fashion that makes it our style.

“She’s a fashion chameleon, she’s a muse for fantasy and futurism,” Romero said. “She’s got quite an ability to transform herself where she is not only fashionable, but it’s believable.”

It’s not like we’ve never seen these style signifiers before. For instance, stylist Misa Hylton’s relationship with Lil’ Kim is often duplicated. In the early ’90s, Lil’ Kim challenged the idea that to be taken seriously as a rapper, a woman had to dress like a man. Lil’ Kim rocked colorful furs and diamonds, wigs printed with designer logos. And who could forget the lavender wig, jumpsuit and nipple pasty she wore to the 1999 MTV Video Music Awards?

“We see again these evolutions and progressions of what other stylists have done in terms of helping build images for artists,” said Romero. “This is a new interpretation by Gen Y, so some of these elements are not completely new so they’re going to seem familiar. But the difference is it’s on a different face in a different generation.”And that’s just it. Doja Cat presents differently as a rapper because she is a different kind of rapper. Get into it (yuh).