Jackson State coach Deion Sanders won’t be on the sideline when the Tigers play Bethune-Cookman on Saturday at Mississippi Veterans Memorial Stadium.

Sanders said on Instagram that he has been sidelined by his doctors.

“Tiger Nation I need y’all to do me a favor this weekend,” the post read. “I need y’all to really show out and pack the vet. Due to my recent foot surgery, I will be following my team of doctor’s orders and I will not be coaching this weekend.

“Coach Gary Harrell, my right hand, will be leading our team and carrying out our mission to win all 4 quarters and play smart, tough, fast and disciplined. You already know I-Believed and I know darn well you do too! Go Tigers.”

Harrell, the only assistant on Jackson State’s staff with head-coaching experience, coached at Howard University from 2011 to 2016. He was 20-36.

Sanders had surgery to repair the second toe on his left foot on Sept. 22. He originally dislocated the toe playing for the Dallas Cowboys in 1998.

He returned to coaching Jackson State a day after the surgery and had been using various scooters to get around the Tigers’ facility and coach practices and games. He has been wearing a protective walking boot on his left foot since the surgery.

The Tigers should be able to beat Bethune-Cookman (0-7). That’s because Jackson State has the Southwestern Athletic Conference’s top defense, allowing 12.2 points and 240.5 yards per game. The Tigers allow just 3.6 yards per play. The Tigers’ next game would then be against Mississippi Valley State (2-4) on Oct. 30.

Without Sanders, at practice Wednesday, the Tigers struggled. They practiced much better Thursday. 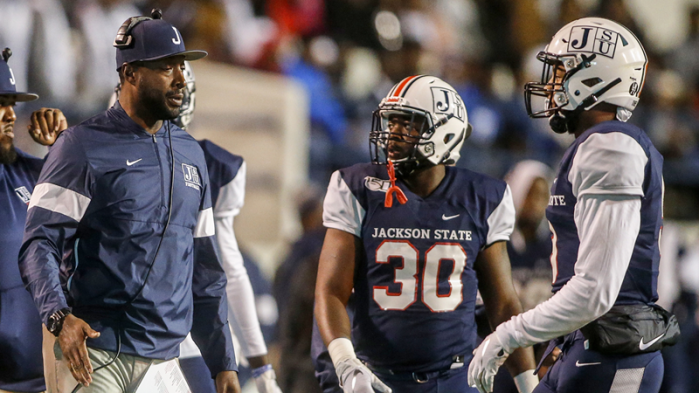 “We were heartbroken honestly,” said Harrell.

“With Coach Prime around it’s just different. Practice yesterday was horrible because he wasn’t there. The coaching staff helped us today by boosting up the energy and we had a good practice on offense and defense.”

A day later, he was back on the practice field, and has been using various scooters to get around the Tigers’ facility and coach practice and games. He has been wearing a protective walking boot on his left foot since the surgery.

Bethune-Cookman is 0-4 in Southwestern Athletic Conference play, but has lost its last three games by a total of 19 points. Jackson State (5-1) is ranked 24th in the FCS poll.

“Bethune is a good team. Their record might not show it but they come close to winning every week,” Harrell said. “We look at (the rankings) but we’re just worried about getting to the championship. We don’t take days off. We just try to play lights out every day.”