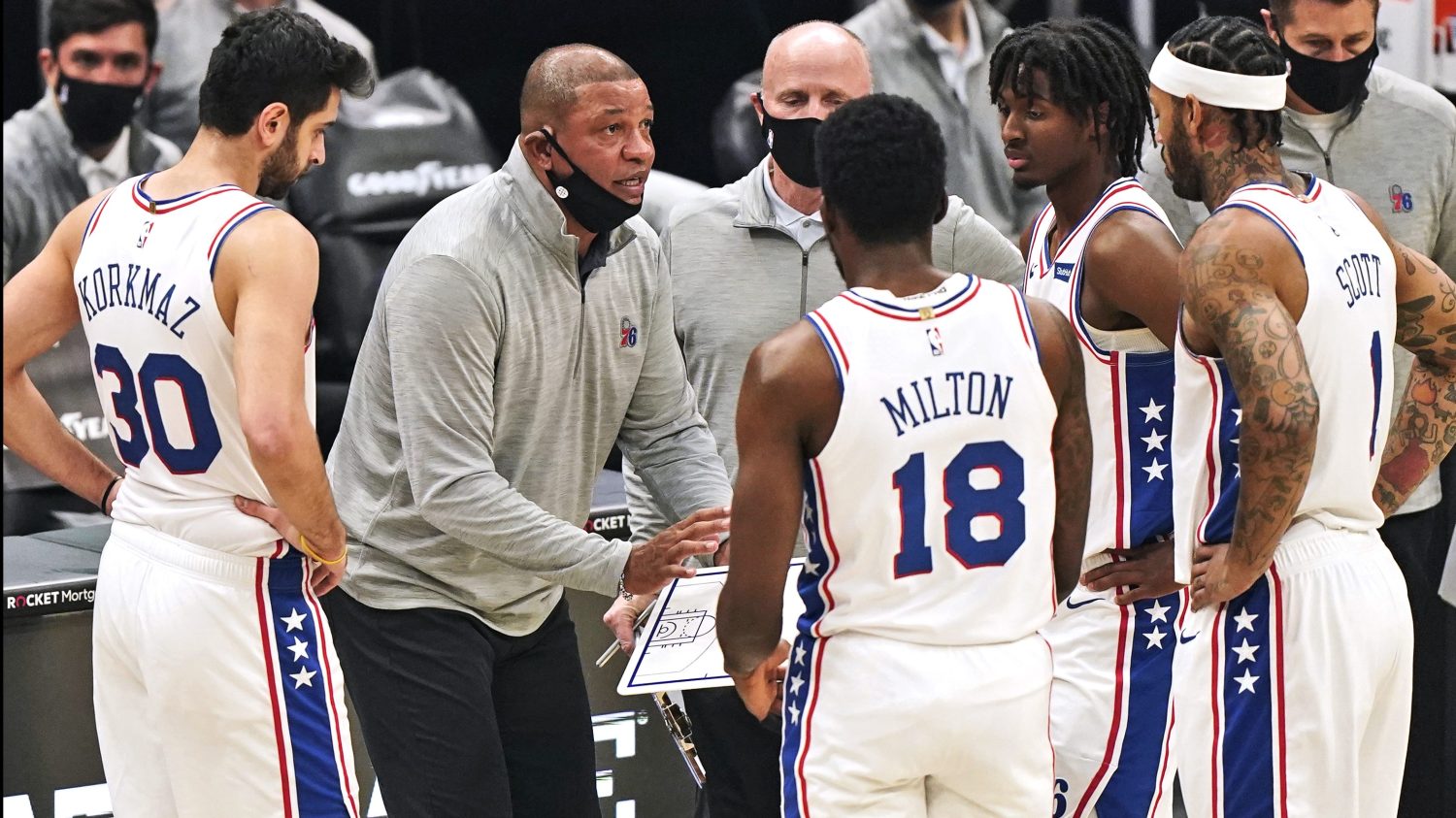 Of the NBA’s top 25 winningest coaches, only three are African American

Doc Rivers joined an elite coaching fraternity on Saturday by moving into 10th place on the all-time NBA wins list. But the Philadelphia 76ers’ head coach is also a member of a much smaller coaching fraternity that won’t be adding any new members anytime soon. Of the NBA’s top 25 winningest coaches, only three are African American: Rivers, Lenny Wilkens and Nate McMillan.

“We had the opportunity and we took advantage of it,” Rivers told The Undefeated. “All three proved what we already knew, that a lot of Black men could have done the same thing that we’re doing. … But the worst disease in the NBA for a long time was a fired Black coach because that guy wouldn’t get another shot.

Further down the list are former Golden State Warriors head coach Al Attles, who is 28th with 557 wins, and Sacramento Kings assistant coach Alvin Gentry, who ranks 33rd with 510 wins. The closest active African American head coach to the top 25 is the Detroit Pistons’ Dwane Casey, who ranked 42nd with 434 wins entering the 2020-21 NBA season.

“I don’t care whether it’s basketball or politics or whatever,” said Wilkens, who coached the Seattle SuperSonics to an NBA title in 1979 and also coached two conference champions. “I think that we have to be prepared. We have to be consistent and be prepared.”

A former nine-time NBA All-Star, Wilkens went on to coach six different NBA franchises. He was named NBA Coach of the Year in 1994 with the Hawks. He was also an assistant coach on USA Basketball’s famed “Dream Team” that won a gold medal during the 1992 Barcelona Olympics and was the head coach of the 1996 gold medal-winning team in the Atlanta Olympics.

Wilkens, who is in the Naismith Memorial Basketball Hall of Fame as both a coach and player, says he takes a lot of pride in his coaching career. He got his start as the Sonics’ player-coach in 1969 and overcame challenges in the field as an African American.

“Back when I first started, first of all, they weren’t very happy about player-coaches or players who eventually became coaches,” Wilkens said. “For some reason, they weren’t enamored with us and particularly Black players. So we got an opportunity. And I remember I was asked one time why you don’t see more Black athletes involved with coaching. And I said, ‘Because we don’t get the opportunity to interview.’ And it wasn’t taken very well. And I didn’t get a few interviews, which is OK because it didn’t bother me.

“But the thing is, I think then during one stretch, we started to get interviews. We started to get more involved. And you had a lot of Black coaches who were involved in the league. Not so much today for some reason.”

On Jan. 6, 1995, Wilkens became the winningest coach in NBA history, notching his 939th coaching victory to surpass Boston Celtics legend Red Auerbach’s 938. Auerbach congratulated Wilkens after the Hawks’ historical 112-90 win over the Washington Bullets at the Omni in Atlanta.

“It was a huge celebration,” Wilkens said. “The players, they knew what we were going for. And one of the players, a guy named Ken Norman, grabbed me and picked me up and carried me around the arena. And the fans went wild. They were happy about it. And also Red Auerbach, whose record I broke, was happy about it. Because he called me and was very happy that I was the one that did it. …

“What I’d like people to remember is that any place I went, I made a difference in that our teams became competitive. They could compete. They knew how to win. And every time they stepped on the floor, they represented true professionalism. So I think those were important things, and that I was successful. Places I went, we won.”

Rivers says Wilkens deserves much more respect for what he accomplished not only as a Black head coach but for his 15-year reign as the NBA’s all-time leader in coach wins. Rivers adds that he is dismayed by Wilkens rarely being mentioned in conversations about the top coaches in NBA history.

“Look at Lenny’s record. He coached in Seattle, they won a world championship. He goes to Cleveland, Cleveland had struggled for years, they win immediately. He goes to Atlanta, Atlanta starts winning. It’s to me, the Black code: ‘He’s a player’s coach. He’s a motivator.’ No, Lenny was a coach. Lenny ran great stuff. Lenny was great out of timeouts. Lenny was a hell of an X and O coach. Yet, you don’t hear that, but you hear it about everybody else. ‘Great tactician, great this, great that.’ It bothers me.”

In 2010, Wilkens was surpassed by then-Warriors head coach Don Nelson for first place on the all-time wins list. Nelson retired after the 2010-11 NBA season with 1,335 wins — three more victories than Wilkens.

Wilkens jokes that the competitive spirit in him has made him consider coaching again to regain the record.

“We were both interviewed for the Hall of Fame a few years ago,” Wilkens said of Nelson. “And I told him that I was going to come back … so that I could pass him up.”

When told of that conversation, Rivers said: “I should give him the job.”

Rivers, meanwhile, has put himself in position to be named to the Hall of Fame as a coach one day and potentially challenge for the top spot in coaching wins.

The 59-year-old won the NBA Coach of the Year award in 2000, coached the Celtics to a championship in 2008 and is the winningest coach in the history of the Clippers with 356 wins over seven seasons. After the Clippers relieved him of his duties on Sept. 28, the 76ers hired him days later as their new coach entering the 2020-21 season.

Wilkens and McMillan both offered strong praise for Rivers’ accomplishments.

“He certainly deserves to be in the top 10,” Wilkens said. “He’s paid his dues.”

“Doc has been respected and he gets the respect from everyone because he not only has won games, but a title,” McMillan said. “And that’s the big thing for us as Black coaches is to win titles to put us on the level so people will look at us as some of the good coaches in this league.”

So, does Rivers have a goal of becoming the NBA’s all-time leader in wins?

“I haven’t even given that thought yet,” Rivers said. “I’ve been fortunate. I guess Pop [Gregg Popovich] and I have a chance. I’ve done it with three teams now, but I’ve coached the last 21 years in a row. Even though I’ve been fired, I’ve not taken a break. By the start of this season, I was coaching again. So I haven’t had a break and I don’t want one. I love what I’m doing. I have amazing passion, but maybe too passionate some would say.

McMillan was dismissed from the Indiana Pacers last season after the team was swept in the first round of the playoffs. He had earned a 183-136 record over four years in Indiana, making the playoffs each season. Despite the sudden firing, McMillan said he is proud of his coaching accomplishments, which features a .529 winning percentage over 16 seasons.

“It’s a blessing really considering how I came into this league as a second-round pick and not a star and I was able to stay in the league for 12 years and then have a career in coaching,” McMillan said. “None of it I ever really dreamed about. It was just something that through hard work the opportunity presented itself. So, to kind of look at coaching 1,000 games and winning over half of them, I’m absolutely proud.”

McMillan said he took the Hawks’ assistant job to “step back and look at it from another view.”

“What I love about Nate is he’s his own man,” Rivers said. “Nate keeps quiet and wants to do his own thing, is a family man that just wants to do his job and go home. He ain’t out there calling reporters, working GMs. That’s not who Nate is. Nate believes, and I agree with Nate, ‘Do your job and your work will speak for itself.’ ”

For Wilkens, Rivers and McMillan, being the only African Americans among the 25 winningest head coaches in NBA history is bittersweet. Each offered words of wisdom for Black head coaches dreaming of joining their ranks one day.

“Be consistent in what you do,” Wilkens said. “Always be prepared, because I think that’s important. That every time you go into a game, you should have your preparation done so that when you talk with your players and you gave them the game plan, they know exactly what to expect.”

“We are criticized, in my opinion, more. And that’s OK,” Rivers said. “Don’t fight it. Keep doing your job. And if you do your job right and with the right passion, it’ll work out for you. And then stand up for your principles, whether it’s popular or not.”

“You have to be loyal to whoever you are working for,” McMillan said. “I always have taken the approach that the organization that I am working for is where all my attention is. I don’t really look back. … I am not doing things for my next job. Some people are working and they got one foot in and one foot out trying to network. I don’t think you take that approach. If you commit to that organization and that team, things will work out for you.”