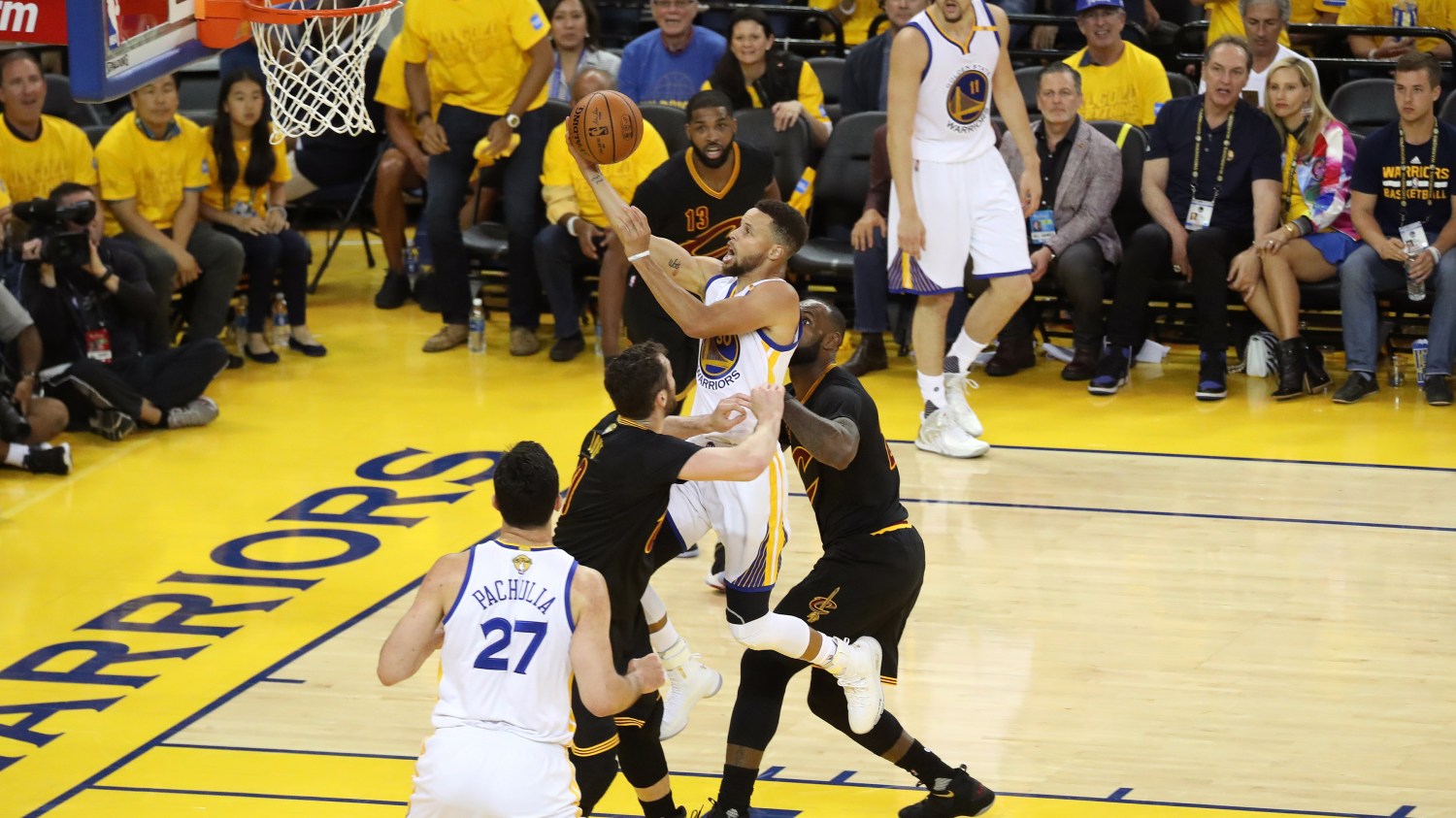 Stephen Curry #30 of the Golden State Warriors goes up for a lay up against the Cleveland Cavaliers in Game Two of the 2017 NBA Finals on June 4, 2017 at ORACLE Arena in Oakland, California. Joe Murphy/NBAE via Getty Images
2017 NBA Playoffs

Do the Warriors have the best offense in NBA history?

OAKLAND, California — There was Magic Johnson and his “Showtime” Los Angeles Lakers. Shaquille O’Neal with Kobe Bryant and the Lakers were pretty darn good, as was O’Neal with Penny Hardaway and the Orlando Magic. Michael Jordan, Scottie Pippen and the triangle offense were hard to stop with the Chicago Bulls. Hakeem Olajuwon, Clyde Drexler and their 3-point-shooting supporting cast scored with versatility for the Houston Rockets.

But with all due respect to the past, could today’s Golden State Warriors featuring NBA All-Stars Kevin Durant, Stephen Curry, Klay Thompson and Draymond Green have the greatest offense in NBA history?

Former Lakers guard Byron Scott, who shared the backcourt with Johnson during the Showtime era, did not beg to differ.

“I can honestly say that might be the best offense I’ve ever seen,” Scott told The Undefeated. “So many weapons and so many great scorers. They can beat you with their shot and they can beat you off the dribble, which creates even more problems.”

The Warriors improved to 14-0 in the postseason after defeating the Cleveland Cavaliers 132-113 in Game 2 of the NBA Finals at Oracle Arena on Sunday night. Warriors head coach Steve Kerr returned to the sidelines after missing 11 games because of complications from back surgery. Golden State received a combined 87 points from Durant, Curry and Thompson, and the Warriors nailed an NBA Finals-record 18 3-pointers.

“We forced them into 20 turnovers and they still beat us pretty good,” Cavaliers forward LeBron James said.

The Warriors have three NBA All-Stars who have the ability to score at least 30 points on any given night; several offensive playmakers with Green, Andre Iguodala and Shaun Livingston; and an alley-oop catcher in JaVale McGee. Since the current NBA playoff format began in 1984, the highest offensive efficiency rating (points per 100 possessions) belongs to this season’s Warriors at 113.5 per game. Johnson’s 1986-87 Lakers were second at 113.1, and the 2009-10 Phoenix Suns were third at 112.9. This season’s Warriors also have the best field-goal percentage in the regular season and postseason since 1983-84 with 56.4 per game, while the 2015-16 Warriors averaged 55.5 and the 2013-14 Miami Heat were at 55.4.

Along with Scott, The Undefeated reached out to several former NBA stars who played in or against notable offenses to ask if today’s Warriors have the greatest offense in NBA history.

In The Golden Democracy, a short video presented by Bryant’s “Musecage Basketball Network,” the Lakers’ all-time leading scorer broke down how the Warriors play “team ball” in their offense that he described as “rare” as teams try to defend three versus three. The five-time NBA champion added that the Warriors’ offense challenges a defense’s ability to communicate. Bryant said foes will eventually be “dealing with the physicality of the game,” which wears teams down, as well as countless screens. He added that the Warriors have “great individual scorers, but they are never stagnant, they are constantly looking for each other, screening for each other and passing for each other, taking advantage of every defensive mistake.”

“A lack of communication brings division. Division breaks teams apart. A team apart can’t play as one. If you can’t play as one, your season is done. Long live The Golden Democracy,” Bryant said in the recent ESPN-aired video.

When asked if the Warriors have the best offense of all time, Thomas told The Undefeated: “This Golden State Warriors team that we are watching is going to go down as one of the best teams to ever play and should be talked about in that light. You’ve got to compare their offense [to Showtime], but the eras are so different. You don’t have the Kareem [Abdul-Jabbar] factor. But if you’re talking Magic, Byron Scott, Michael Cooper and all that, then you’ve got to say Durant, Thompson, Curry, Draymond Green and all them. They’re comparable to them. The only thing is, ain’t no Kareem. I’m happy to be on this Earth right now watching these young jokers play. They’re doing it.”

When asked if this season’s Warriors have the best offense of all time, Wilkes told The Undefeated: “They had a lot of turnovers tonight, but in spite of … when Klay gets going and when you get Steph and Kevin out there smoking and Andre coming off the bench, Livingston … there is so much balance that it is hard to key on any one guy.

“There is nothing better. Maybe as good. But nothing better. They are so unselfish, first of all. No one is really pounding the ball. They hurt you deep. They hurt you midrange. They can take you to the basket. They do everything. They don’t have the dominant inside like we had with Kareem or something like that.”

When asked if the Warriors have the best offense of all time, Smith told The Undefeated: “Their offensive firepower is in the top five. The one thing that they don’t have is that if the game slows down, which teams can’t do here in this era, they don’t drop it inside for two or three possessions because their best players still don’t post up. A Clyde Drexler, even when the game was going fast, you could drop it inside to him. That would be the only thing that separates them. The bigs of the past were able to defend the 3 better. Now, you don’t have to be a 3-point shooter. You just have to be able to defend the 3. If you can defend the 3, you can be on the floor.

“But what makes them tough is they have three guys who are great shooters [Durant, Curry and Thompson], but two guys [Durant and Curry] are one of the top one-on-one players in the world that never gets double-teamed because they play together. So, you can’t leave. There have never been guys who are great at one-on-one and they never get [double-teamed]. The only guys I remember like that are Kobe with Shaq. You couldn’t double-team Kobe because you couldn’t leave Shaq. The best one-on-one players in the world have the luxury of playing one-on-one.”

When asked if the Warriors have the best offense of all time, Scott told The Undefeated: “To simplify it for you, it’s the 3-ball. When you have three guys on the floor that can make a 3, or five 3s or 10 3s [together], it opens up the floor. Penny and Shaq shot in the paint. You had to go and double them [defensively]. But Durant can bring it up, Klay brings it up and Steph brings it up. Now what Steve is so smart at is having Draymond bring it up. Tonight, Steph gave the ball up and Draymond ran off screens, got the ball, bang 3, bang 3, bang 3. It kills you. It kills you morally. It’s like, ‘What do we do? Where do we switch?’ …

“It has the potential [to be the best] because Kevin gives them the missing piece. It’s been my theory since the playoffs started that he is not Harrison Barnes. It’s just that simple. When Klay didn’t shoot the ball well before, they would have to lock down [defensively] and still win. In Game 1, they still played good [defense], but Durant got you 38. Harrison Barnes never got you 38. I love Harrison Barnes, but that’s apples and oranges. I want that sweet apple over that sour orange.”

When asked what makes the Warriors’ offense so great, Kerr told The Undefeated: “It’s a combination of incredible skill, but the number of playmakers. That’s what I think has defined our team. Everybody knows about ‘The Splash Brothers’ and K.D. Now what’s made our team whole the last few years is Shaun Livingston, Andre Iguodala and this year David [West] and Zaza [Pachulia]. We have passers all over the floor, and they are very unselfish and like playing together.

“When it works, when it clicks, you can always keep the ball moving and get a good shot. You’ve got a lot of skilled guys besides just the superstars.”

So, is your Warriors’ offense the best ever?

“I don’t know. I don’t pay attention to that stuff,” Kerr said. “I know if I had to play against the Warriors the way they are playing, I would have no chance to stay on the floor. Whoever they would have tried to have me guard would have been a problem.”